When completed around 1850 the mansions at the northwest corner of 14th Street and Seventh Avenue were especially spacious at 25-feet wide and five stories tall above English basements.   The corner house, No. 201, seems to have always been operated as a high-end boarding house.

On February 29, 1856 an advertisement in The New York Herald offered "For Sale--The furniture and good will of a select boarding house, pleasantly located in West Fourteenth street."  The ad noted that there was "a full complement of boarders at present in the home."

Those boarders were well-do-to families who enjoyed commodious suites.  Among them at the time of the sale were Isaac Seymour, his wife,  and their daughter, Mary.  When the Bank of North American was organized in February 1851, Seymour was appointed its "cashier," a position similar to a vice-president today.  By now he was the bank's president.

Seymour was a well-respected citizen.  He was a member of the American Geographical and Statistical Society and a vestryman at Trinity Church.

Because of its "select" nature, the house had few boarders and, like the Seymours, most remained for years.  A vacancy in October 1859 was advertised to "A gentleman and wife, or two single gentlemen, can be accommodated with full or partial board; the house has all the modern improvements.  Those wishing to make permanent arrangements for the winter will find it a desirable opportunity."

No. 201 was the scene of a series of tragedies beginning with the death of 7-year old Orade Elena Caruana on April 17, 1860.  The daughter of Stephen B. and Almira w. Caruana, her funeral was held in their suite the following day.   On October 8, 1861 the infant daughter of Francis A. and Emma F. Husted died, and her funeral was held in the house two days later.  What must have seemed like a curse continued on December 5, 1862 when five-year old Jennie Brower died of "membranous croup."  Her funeral, too, was held in the house.

The next resident to die was not a child.  On Sunday, September 13, 1863 the Seymour family went downtown as usual for services at Trinity Church.  The New York Times reported "During service [Seymour] was observed suddenly to fall back in his seat as if exhausted."  Several men of the congregation, including Major General [John Adams] Dix, assisted him into the vestry, but it was too late.

News spread around the country and a month later, on October 16, the California newspaper The Marysville Appeal reported "Mr. Isaac Seymour, president of the Bank of North America, in New York, dropped dead in Trinity church on  Sunday, Sept. 13th."  Local newspapers were understandably less blunt.  The 70-year old's death was attributed to heart disease.

It may have been the Seymour apartment which was advertised the following May.  The rooms were described by owner Giles W. Dart as "A handsome suit of rooms on the parlor floor of an English basement house."  The proprietor noted "there are but few boarders of first respectability."

In July 1868 John N. Genin took a bold step.  For years he had operated a retail hat store on Broadway.  Now he sold the business, leased No. 201 from Giles Dart, and began a conversion from boarding house to hotel.

Genin and his wife, Mary, did an impressive job as was evidenced in February 1871, when he attempted to sub-lease what was now the Hotel Brentwood.  His ad read "Hotel to Let--201 West Fourteenth Street, northwest corner of Seventh avenue, lately altered and adapted for a first class family hotel, with all the modern improvements, containing sixty rooms, with three bathrooms, laundry, four vaults under sidewalk; heated by Baker & Smith's improved steam heating apparatus; Newman & Capron's bell annunciator; elevator from cellar to roof."

While the elevator and steam heat were no doubt cutting edge conveniences; modern hotel guests might bristle at having to share the three bathrooms with 60 rooms.

Genin appears not to have found a leaser and he continued to struggle.  In January 1876 he mortgaged his furniture to Giles W. Dart (who continued to live in the building); and in June 1878 he took out a second mortgage on the building with Dart.

In the meantime, as was the case when it had been a boarding house, many of the residents remained for years.  Anthony Allaire, a warden at the Workhouse on Blackwell's Island was living here with his wife, Sarah, and two sons Frank and Joseph at least by 1878 when Joseph entered New York City College.

Allaire and Genin came to an agreement around 1880.  Allaire took over the proprietorship of the hotel and Frank O. B. Genin stayed on as clerk.

In August 1881 a guest checked in, identifying himself to Frank Genin as Captain James Egan of the U.S. Army.  He was in town, he said, "being detailed to sit in a court-martial on Governor's Island."  As such the military would be responsible for his stay and he was not directly charged.

After Egan had racked up $208.30 in "board, wine, &c." according to court documents, Anthony Allaire discovered he was not in town to sit in on a court-martial, but "was here to be tried by court-martial."  Allaire had him arrested for the bill--equal to more than $5,000 today.  Captain Egan claimed "he never boarded at the Hotel Brentwood, but merely went there occasionally to play billiards, &c."

Sarah C. Allaire died suddenly in the hotel on May 2, 1882.  Her funeral was held in the Allaire apartment two days later.  Anthony Allaire went back to law enforcement.  On August 10, 1883 he was touted as a hero policeman when he rescued Police Captain Thomas Killilea who was drowning in Patchogue Bay.  The two cops had gone there together on vacation.

Despite what seems to have been a rocky financial start, by 1888 John N. and Mary J. Genin owned No. 201 (the title was in Mary's name).  It was around that time that a store was installed on ground level.  The hotel's name was changed to the Hartford Family Hotel.

The Genins sold the building to police Superintendent Thomas F. Byrnes and his wife Ophelia in March 1890 for $54,500; more than $1.5 million in today's dollars.  The "family" hotel was about to get a significant change.

As had been the case with the Genins, the title of No. 201 was put Ophelia's name; but this time it was possibly to obscure Thomas's ownership.  They leased the store in October 1891 to Hugh Slevin for a term of 20 years at $6,000 each year for the first five, and $7,000 a year afterward.  A Civil War veteran with the 83rd New York Volunteers, Slevin converted the space to "The Slevin," a saloon.

A somewhat slippery operator, Slevin put the liquor license in the name of an employee, James Thompson.  So when the Excise Commissioners offered "additional licenses allowing saloons to be kept open between the hours of 1 and 5 o'clock in the morning" in December 1892, it was Thompson's name which appeared on the $500 application.

The Rev. Dr. Charles Henry Parkhurst of the Madison Square Presbyterian Church and head of the New York Society for the Prevention of Crime (better known as the Parkhurst Society), was not fooled.  In October 1893 he attacked Slevin for selling alcohol on Sundays.  When Slevin told reporters that his name did not appear on the license; The New York Times announced simply "The fourteenth Street place is known as 'The Slevin."  When Thomas Byrne was dragged into the affair, he rather foolishly denied that his wife owned the property.  Real estate records quickly disproved that.

It appears that Slevin managed to wriggle out of the situation through bribery and graft.  But the publicity drew unwanted focus and eventually drew the attention of Police Commissioner Theodore Roosevelt.  In July 1895 Roosevelt had Captain Lynch demoted to sergeant "because he had failed to close the saloon of Hugh Slevin at Seventh Avenue and Fourteenth Street," as reported in The New York Times on July 26.

Roosevelt declared "The neglect to close that place, and its bold persistence in breaking the law, were very suspicious.  Slevin's saloon will not be open after this on Sunday.  He will have to close up and stay closed up, as well as any other saloon keeper on Sunday."

The business relationship between Hugh Slevin and the Byrnes changed from landlord-tenant to partners around 1896.  The trio acquired the two adjoining rowhouses at Nos. 46 and 48 Seventh Avenue (later renumbered 64 and 66) and joined the three buildings internally to become The Slevin Hotel which catered to male guests only.

Much of the country was hit with a crippling heat wave in the summer of 1900.  New York newspapers reported on deaths of the heat as far away as Chicago.  On June 27 45-year old lawyer Edward Chrystie, who lived nearby on Seventh Avenue, walked into Slevin's saloon.  The New-York Tribune noted that he "was well known in the saloon" and that when he entered "his face was flushed and his appearance indicated that he was suffering from the heat."

Chrystie went into the back room, but never came back out.  "After a considerable time Slevin went back to see what had happened.  He found Chrystie dead."

In May 1917 architect William S. Boyd, whose offices were next door at No. 203 West 14th Street, made further alterations to the old brownstone.  The stoop was removed and windows changed at a cost of $300.

Prohibition, enacted in 1920, put a crimp in Hugh Slevin's bar business.  The backroom where Edward Chrystie had met his death was leased in March that year to the New England Lunch Company as a luncheonette.  Or so it seemed.

On May 6, 1922 agents arrived with a search warrant and found "two cases of real beer."  Once again Hugh Slevin skirted arrest by not having his name on the paperwork.  The New York Times reported "Thomas Rohan and Lawrence Flynn, alleged owners of the Slevin Hotel, their bartender, John Nobel...and John Mulligan, manager, were served with summonses."

Four months later, on September 4, 1922 agents raided a number of "resorts" posing as restaurants.  Among them was the restaurant in Slevin's Hotel.

When The Times published Hugh Slevin's obituary on June 21, 1927, there was no mention of saloons or liquor raids or illegal operations.  Describing him only as a "hotel proprietor," it noted "He was born in Ireland and came here as a boy.  He left a widow, a son and five daughters, one of whom is Mrs. George T. Ryan, President of the Ursuline Alumnae of New Rochelle."

Slevin's death did not immediately put an end to the undercover liquor sales at No. 201.  On December 7, 1930 The Times ran the headline "25 Dry Agents Raid Greenwich Village" and noted that Thomas Cox was arrested for having 40 bottles of "so-called liquor" and nine barrels of beer.

The following year, in November, K. Kranick's candy store moved into the former saloon space, ending that colorful chapter of the building's history. 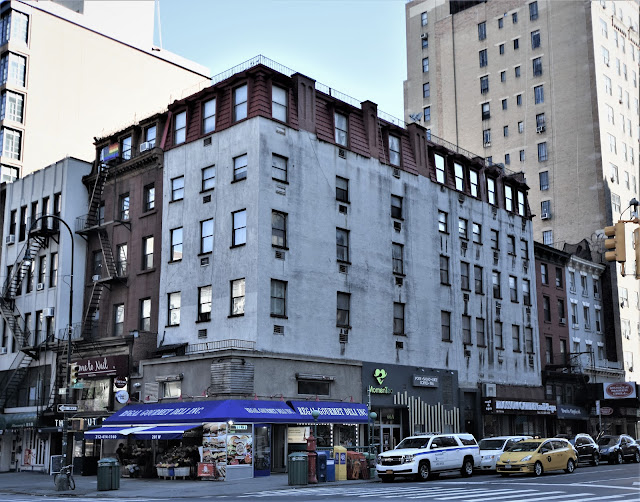 Attempts at modernizing the facade in the latter part of the 20th century--a slathering of stucco, the shingling of the mansard, and repellent storefronts--leave little hint of a sumptuous pre-Civil War mansion or its subsequent, fascinating history.