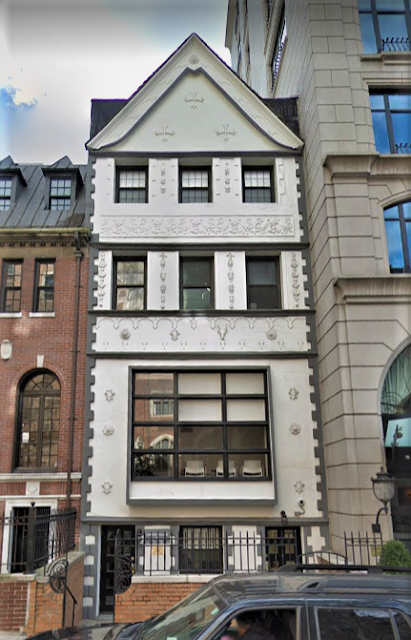 On May 25, 1921 The New York Times reported "Word has been received from Paris telling of the marriage of Mrs. Julia L. Benkard of this city and former Lieut. Gov. Lewis Stuyvesant Chanler, which took place privately in Paris on Monday.  Much secrecy surrounded the marriage."  Despite that cloak of secrecy, the newspaper added "The marriage does not come as a surprise to society."

Julia, better known as Julie, had married broker J. Philip Benkard in December 1902 and had two daughters, Phyllis and Elsie.  She had divorced him in Paris five months earlier.  Born in Newport the great-grandson of John Jacob Astor, Chanler had served as Lieutenant Governor of New York in 1907 and '08.  He divorced his first wife, the former Alice Chamberlain, in Paris around the time of the Benkard divorce.

In September 1921 the Cuidado Investing Co. purchased the three-story brownstone dwelling at No. 132 East 65th Street from the Carter family.  Mrs. Bernard S. Carter was highly active in the Big Sisters of America.  One of her last events in the house was a rummage sale for the group on November 17, 1920.  In reporting the sale of the house, the Real Estate Record & Builders' Guide noted the buyers "will remodel the structure and resell it."

And remodel it they did.  One of a row of 20-foot wide brownstones designed by Frederick S. Barus in 1870, it was decidedly out of date.  The firm commissioned Robert B. Bowler to transform the dated Victorian into a modern, American basement dwelling.   The renovations, completed within five months, left no trace of the 1870 house.

The architect removed the stoop, moved the entrance to just below the sidewalk level, and covered the remodel facade with parging--decorative stucco with molded designs.  On February 4, 1922 The Record & Guide said the firm had altered the house "in to an unusually attractive Italian design from plans by Robert B. Bowler, architect."

Among the molded designs were dangling garlands of fruit and flowers, a bull's head, stylized peacocks.  Vines climbed up the charming bargeboard of the gable to a central rose. 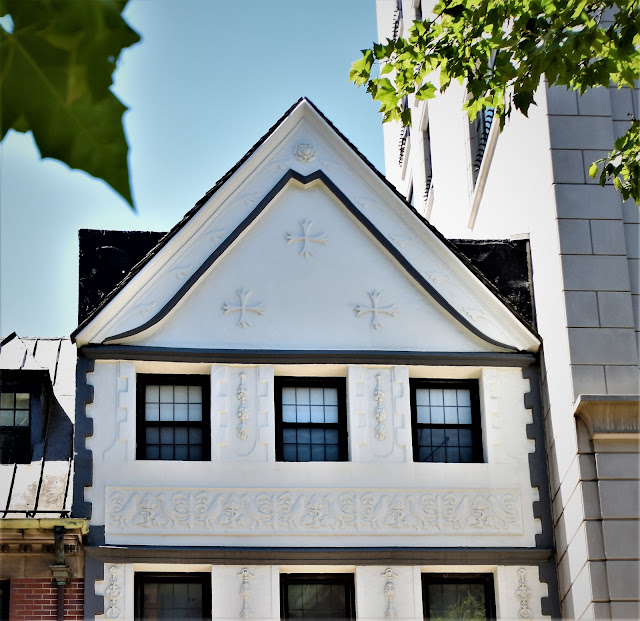 By the time of the article, Lewis S. Chanler had purchased the house "as his city home."  On February 1 the New-York Tribune said "It is Italian in design and is extremely attractive.  The dining room is in the rear, opening into a yard, which will be changed by the owner to an Italian garden."

Julie's daughters, Phyllis and Elsie, moved into the 65th Street house with their mother and step-father.  Julie's name appeared in print as often as her husband's; less for teas and luncheons than for social causes and stances.

She was selected in November 1926 to sit on the "play jury," a group of six men and six women carefully chosen by the Chief Assistant District Attorney's office.  The New York Times explained it was a "test of whether stage [plays] may treat 'adult subjects' decently."

The jury was taken to see The Captive on November 15.  They then discussed it and cast secret votes.  Six declared it "objectionable from a standpoint of public morals."  Five voted that it was not.  One submitted a blank vote.  The Captive was allowed to open, since a majority of "objectionable" votes was not achieved.  One suspects that Julie voted against censoring it.

Tragedy occurred in May 1928 after Julie and her daughters sailed to Paris.  They arrived on Friday, May 11.  The next day Phyllis fell ill.  She was taken to the American Hospital where she was diagnosed with an ear infection.  It rapidly progressed to meningitis and the 24-year old died the following Wednesday.

It may have been that horrific incident that caused Julie to seek solace in a new religion.  But for whatever reason, she soon fervently embraced the Middle Eastern Baha'i Faith.

Elsie's engagement to Charles H. Clarke was announced on December 11, 1929.  The wedding took place in the Chanler house on February 26, 1930.  The New York Times called the event "out of the ordinary, for they were married with a Bahai ceremony.  It was the first time that such a ceremony, described by Mrs. Chanler as very simple, has been used at a society wedding in New York."

The ceremony was officiated by Persian-American author and interpreter Mirza Ahmad Sohrab, a leader of the Reform Baha'i Movement.  He would become a very familiar presence in the East 65th Street home.

The article mentioned "Mrs. Chanler and her daughter have recently embraced the Bahai sect, an offspring of the Persian religion, which is said to have many converts among English-speaking peoples."

A few hours before their 65th Street wedding, Elsie and Charles had been married in a civil ceremony in the Municipal Building.  The Times explained a few days later it was necessary "to comply with the requirements of the law."  The State of New York had informed the couple that Mirza Ahmad Sohrab "is not a licensed clergyman, as the Bahai faith does without clergy or salaried disciples."

In 1929 Julie and Sohrab founded the New History Society as a way of spreading the Baha'i Faith.  In doing so they unwittingly ignited a fuse that would end with Sohrab's excommunication from Baha'i.  But in the meantime, the pair worked tirelessly promoting the faith.   Within the year the Caravan of East and West, an educational movement was established.   All of the groups' meetings and activities took place in the Chanler house.

On October 25, 1930, for instance, The Times reported on a two-day Oriental bazaar held in the house by the Caravan, "a section of the New History Society, the purpose of which is to unite the creative idealists of the Eastern and Western cultures."

Mizra Ahmad Sohrab explained that the funds raised would go to "the artists' caravanserai...Here will be presented the pageants, plays and lectures of the society."   The article noted "Artists who performed during the afternoon and evening included the Princess Walhletka, American Indian; William E. Benton, character analyst; Alexander Maloof, pianist, and a group of psychics, numerologists and astrologers."

The New History Society hosted lectures which drew large audiences.  One event drew a reported 200 members and guests who crowded into the first and second floors.  It drew the attention of the Department of Buildings, whose inspector put the load limit of the second floor at 140.  Thereafter the Chanler butler would hang a sign on the entrance announcing that the limit had been read and no more could be admitted.

In 1932 Julie was appointed the had of the Women's Peace Society, and in 1934 she and Sohrab organized the Junior Caravan in the house.  They announced "The group will have as members children from 6 to 15 years old."  Its goals included fostering "the spirit of fellowship and harmony," and the "elimination of child labor and exploitation."

The projects continued to eat away at the amount of floor space available for the Chanler's private quarters.  On June 23, 1938 Julie formed the Friends of the Duke of Windsor in America.  She told reporters its members intended to defend him against "ill-natured attacks upon his character and motives."   The New Yorker noted in May the following year that the society "is located on the third floor of the home of Mrs. Lewis Stuyvesant Chanler."

By now Mirza Ahmad Sohrab was embroiled in serious friction with the New York Spiritual Assembly of the Bina'i Faith.  He refused to allow it to interfere with the operations of the New History Society.  It came to a climax with a confrontation between the Assembly's head, Horace Holley, and Sohrab.  Holley expelled Sohrab from the Baha'i community around 1939.  The rift was even more personally devastating for Sohrab when his wife and daughter chose the faith over him and changed their names.

During all the upheaval to his domestic tranquility, Lewis Chanler remained strikingly out of sight.  He remained a member of the Episcopal church, worshiping at St. Mark's in the Bowery.  It was there that his funeral was held on March 3, 1942.  the 72-year old had died in the 65th Street house following a long illness.

But even in the Episcopalian Church Baha'i wriggled its way into the service.  The Times reported "At the conclusion of the scriptural reading Mirza Ahmen Schrab [sic], director of the New History Society, read from 'the service for the departed' of the Bahai cult."

Shortly afterward Julie transferred title to the house to Baha'i Faith and it was rechristened "Caravan House."   She continued to live in what was now termed an "apartment" in building documents upstairs.  In 1953 a one-story library that projected into the garden, designed by architect John H. McNamara, was completed.

Julie continued to work feverishly.  In 1956 she published From Gaslight to Dawn, describing her devotion to the cause of world brotherhood.  She wrote articles for The Caravan, the movement's publication, and translated Baha'i literature.

On March 11, 1961 Julie died in the Hospital for Special Surgery at the age of 78.  The New York Times said of her "Although Mrs. Chanler was listed in the New York Social Register, her mode of life contrasted sharply with the activities she had followed in society.  She was said to have devoted her fortune to Bahai and had expressed the hope that its activities would be carried on."

The house was used for a variety of events--Baha'i weddings; meetings for poets, artists, and lecturers; art exhibitions.   Julie Chanler may not have approved of all of them.  On June 17, 1968 New York Magazine announced a free jazz concert here; and on September 13, 1971 it announced the six-week course "Scuola Italiana di Cucina" to be held in the former Chanler kitchen." A cooking class sponsored by the America-Italy Society, it was taught by Ferruccio Andrea Dodi, the private chef of the Uzielli family. 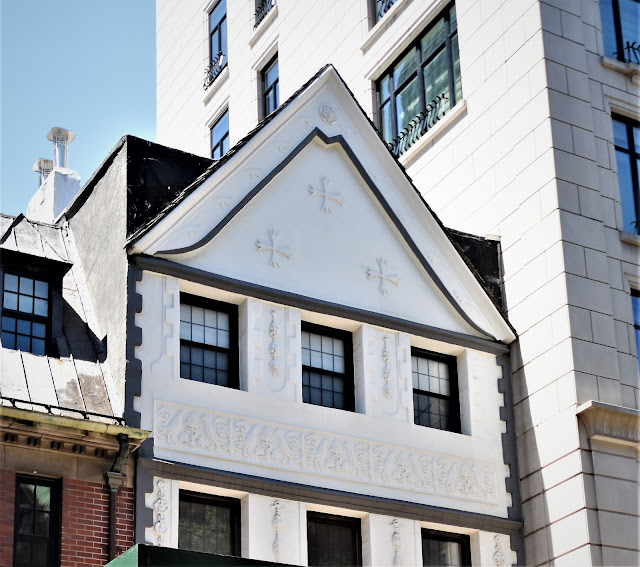 By 1978 the name Caravan House had nothing to do with Baha'i.   The Parliamo Italiano took over the space.  It was originally operated by the Caravan Institute and is now part of Hunter College.   While there is a duplex apartment in the top floors, the remainder of the house contains classrooms and lecture rooms where students learn Italian from native-born instructors.