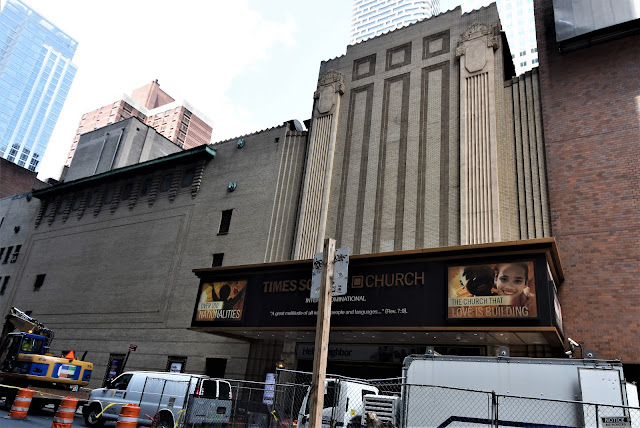 By 1929 the grandest of the motion picture theaters were palaces with lavishly decorated auditoriums that vied for attention with the films being shown.  Among the most prolific of theater architects was Thomas W. Lamb who was commissioned by Warner Bros. to design its Warner's Hollywood Theatre that year.


Inside, Art Deco yielded to Baroque.  Lamb's auditorium spilled over with gilded ornament, painted panels, and crystal chandeliers.  It was the Versailles of motion picture palaces.

A night at the movies in the 1920's and '30's included a live show.  Lamb's stage was among the largest in the theater district.  The apparently amicable relationship between the managers of live theaters and motion picture theaters was evidenced on the opening night of Warner's Hollywood.  On April 17, 1930 The New York Times reported "At the dedication of the Warners' Hollywood Theatre next Tuesday evening a contingent of stage players will act as ushers and program girls.  These will include Bobby Clark, Paul McCullough, Joe Fresco, Armida, Ann Pennington and others."

The theater opened on April 22 with the musical comedy Hold Everything, starring Joe E. Brown, Winnie Lightner and George Carpentier.

Another significant motion picture to premier here was Casablanca. which opened on November 26, 1942.  Starring Humphrey Bogart, Ingrid Bergman and Paul Henreid, it went on to become one of America's most classic motion pictures.

By now the managers waffled between motion pictures and live theaters.  Briefly, in 1940, the name was changed to the 51st Street Theatre and stopped screening movies; offering dance programs and drama instead.  A year later the name again became the Warners' Hollywood; although occasional live shows were still staged, like the 1941 Banjo Eyes with Eddie Cantor.

The end the line as a motion picture house came in 1948 when it was purchased by Broadway producer Anthony Brady Farrell.  He initiated a renovation to a legitimate theater, naming it in honor of Mark Hellinger, who had died on December 21, 1947 of heart disease at the age of 44.  Hellinger's impressive and varied career started out as a theatrical critic.  By 1937 he was a syndicated columnist in 174 newspapers when he was hired by Jack L. Warner as a writer and producer.

As the renovations neared completion, The New York Times reported on October 12, 1948 that Farrell "has accepted six sketches by Billy K. Wells for a show he plans to install in his playhouse."  The Mark Hellinger Theatre was dedicated with a fund-raiser on January 16, 1949.  The Times reported it "was dedicated yesterday under the sponsorship of the New York Heart Association at a ceremony attended by leading personages of stage, screen, radio and politics."

Among the speakers that night were Walter Winchell, Joe E. Brown, Toots Shor, Irving Berlin, George Jessel and James A. Farley.  A bronze plaque to Mark Hellinger was also dedicated, its inscription written by Winchell.  More than $200,000 was raised towards fellowships for five young doctors studying heart disease.

Initially Farrell presented light theatrical fare, mostly musical revues.  It opened to the public on January 22 with a revue by Farrell and Sammy Lambert, About Face, starring Bert Wheeler.  The revues did not fall short of their lavish surroundings.  Bless You All, for instance, which starred Jules Munshin, Mary McCary and Pearl Bailey, was a spectacle.  It opened on December 13, 1950 and cost its producers $230,000--in the neighborhood of $2.4 million today.

A major hit debuted on February 11, 1953 when Helen Gallagher opened in Hazel Flagg, a musical stageplay lifted from the motion pictures.  The Times said "To judge by 'Hazel Flagg,' which opened at the Mark Hellinger last evening, borrowing from the movies may not be such a bad thing....it turns out to be a fast and brassy Broadway show."


Another crowd favorite was Plain and Fancy, the hit musical about the differences between the plain lives of the Amish and the flashy life-styles of city dwellers.  While the audience filed into the theater around 7:30, a half-hour before curtain on Friday, January 20, 1956, Al Jones was busy in the office counting out the cast's weekly payroll and inserting the cash into envelopes.  Three others sat about talking, including two of the company's dancers.

Suddenly two unknown men  quietly entered the room.  One pulled out an automatic pistol and told Jones "Give me that bag."  Before the manager could react, the gunman grabbed the $7,000 payroll and, as he turned to leave, warned "I'll shoot the hell out of you if you make any noise."  His partner doubled the threat, saying "I'll kill you all if you move."

The Times reported "Two gunmen not in the cast put on an unscheduled act at the Mark Hellinger Theatre last night, but the show went on as usual."  One has to wonder how the two dancers managed to hoof their way through their routines after the terrifying ordeal.

Nothing so far would compare to My Fair Lady which opened on March 15, 1956 with Rex Harrison and Julie Andrews.  Times theater critic Louis Calta announced "'My Fair Lady' arose yesterday morning festooned with critical garlands and destined to thrive as Broadway's fairest gentlewoman of this, and perhaps other seasons."  He wrote "Hardly had the curtain been rung down when a thunderous ovation greeted the members of the company and the principals.  After more than a dozen curtain calls, the house lights were turned on."

The following days hundreds crammed into the lobby to purchase tickets.  The average wait at either of the two box-office windows was 45 minutes and that day's ticket sales topped $18,000.

My Fair Lady was the Hamilton of its day.  So when President Dwight D. Eisenhower came to New York City in October the following year to address the National Fund for Medical Education at the Waldorf-Astoria Hotel, the First Lady expressed her serious desire to see the play.  On October 22, 1957 the 1,600-person audience was unaware of the 50 Secret Service men lurking about the auditorium.  And as the the overture played, no one realized the President and his wife had slipped in after the lights were dimmed.

The Times reported "After the cast had responded to the last curtain call the show's stage manager, Biff Liff, stepped to center stage and asked the audience to remain in their seats until the Presidential party had left."  But as the audience gasped and craned their necks, Liff realized they had already slipped out.  "As he left, President Eisenhower told a representative of the management, 'It was a very nice show," said the newspaper.

Some wondered how tickets "to the biggest hit on Broadway" had been acquired with one day's notice.  The play's press agent explained that tickets from another party had "been retrieved."  He said "The management sometimes resorts to such violent tactics even in a democracy."

Earlier that year, in March, Farrell had sold the theater to father-and-son team Max and Stanley Stahl.  The two already owned the adjoining building on Broadway occupied by the famous Lindy's Restaurant.

Five years after it opened My Fair Lady showed no signs of slowing down and was now the longest-running play in Broadway history.  The problem was that Richard Rogers and Samuel Taylor, producers and creators of No Strings, had signed a contract with Stanley Stahl to open their play on March 1, 1962.  The producers of My Fair Lady maintained that they had a verbal agreement with Stahl that as long as the play grossed $35,000 per week it would not be ousted.

Neither side budged.   Finally, as the deadline loomed, the case ended up in court.  On February 13, 1962 a State Supreme Court judge ruled in favor of Rogers and Taylor, ordering My Fair Lady to vacate on or before February 22.   The Mark Hellinger Theatre had killed its golden goose.

And it did not take the producers long to find a welcoming venue.  Three days later they announced that My Fair Lady would open in the Broadhurst Threatre on the afternoon of February 28.  At the time of the announcement the play had grossed an approximate $19 million in ticket sales.

Until  the enactment of a new State liquor law on November 1, 1964 alcoholic drinks were prohibited in theaters.   The Mark Hellinger Theatre responded in August the following year by installing a 40-foot semi-circular bar in the rotunda of the lounge.  Theater-goers sipping cocktails at intermission would see memorial productions in the years to come.

The rock opera Jesus Christ, Superstar was a ground-breaking theatrical production.  On October 22, 1971 The National Catholic Reporter said "The play, which opened at the Mark Hellinger Threatre in New York Oct. 12 is probably the most pre-sold musical in Broadway history and may be the most profitable."

Other highly-touted productions were the three-week engagement of the Martha Graham dance company in April 1974, and the 1980 Sugar Babies, starring stage and screen veterans Mickey Rooney and Anne Miller.  The Massachusetts newspaper The Heights said on January 21 "Slapstick, striptease, sparkles, and stars.  That was vaudeville and burlesque fifty years ago.  Magically, it exists again today at the Mark Hellinger Threatre."   In October 1985 Tango Argentina opened, causing New York Magazine to call it "An exciting theatrical extravaganza of music, song and dance.  The critics raved in Buenos Aires, Paris, and now in New York."

The curtain was lowered for the last time in February 1989 at the close of Legs Diamond.   With no new musicals available, the Nederlander Organization, owner of the theater, leased it to the Times Square Church for five years at more than $1 million rent per year.

Then on December 7, 1991 The New York Times reported that the Hellinger had been sold to the church.  "The Hellinger has long been considered one of the best and most beautiful theaters for presenting Broadway musicals," the article added.   Speaking for the Nederlander Organization, Arthur Rubin told Glenn Collins of The Times, "I'm a theater person and I hate to see any theater go.  It's a question of economics." 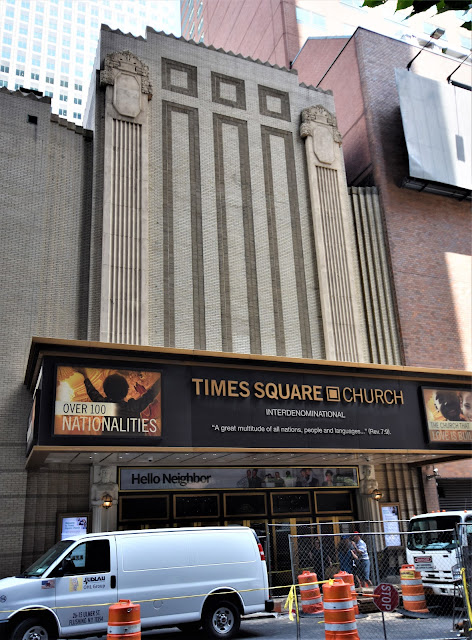 The non-denominational church was founded in 1987 by David Wilkerson, its pastor, at a time when the Times Square district had suffered serious decline and X-rated movie houses and strip clubs occupied many of the former showplaces.  Wilkerson hoped to rescue some of the "physically destitute and spiritually dead people" he saw there.

The Times Square Church still operates from the former theater for which it paid $17 million.  Almost miraculously, it has lovingly preserved Thomas W. Lamb's sumptuous interiors which look today almost exactly as they did audiences in evening clothes saw Julie Andrews play Liza Doolittle.  On the exterior a modern marquee is the sole change.

photographs by the author
Posted by Tom Miller at 10:44 PM