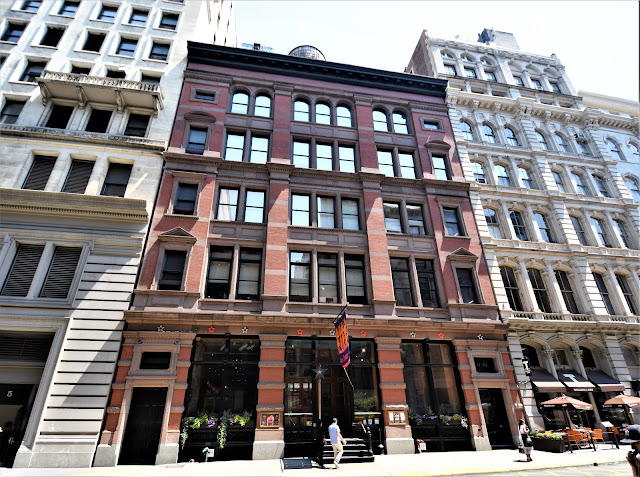 British-born Aaron Arnold opened his dry goods store on Pine Street in 1825. Seventeen years later James Mansell Constable bought into the business and it became Arnold & Constable, Company; although sometime after the Civil War the ampersand would be replaced by a simple comma – Arnold, Constable & Company.

Claiming to sell "Everything from Cradle to Grave," the department store progressively moved to larger quarters, each move inching further uptown.  In 1869 its French Second Empire new store on Broadway at 19th Street was completed.  Yet there seemed to be no end to the firm's success and growth.


In 1872 the store's architect, Griffin Thomas, extended the building further down 19th Street; and then architect William Schickel took the emporium all the way to Fifth Avenue.  It would seem that the department store had reached the limit of enlargement.    Not yet.

In 1883 William Schickel was brought back to create an annex on East 18th Street which would be joined internally to the 19th Street structure.  Shickel made no attempts this time to imitate the French Second Empire style of the main store.  Instead, he turned to Renaissance Revival and warm red brick and brownstone.

The five-story building was completed in 1884.   Its tripartite design featured brownstone banding, Renaissance style pediments, and expansive windows.  The sunlight that poured through the grouped openings of the upper floors would be welcomed by the army of women working there.

While shoppers browsed through the goods on the lower floors, the upper floors housed the factory where "dresses and furs" were manufactured.  The State factory inspector in 1899 reported that 152 women were employed in the shop, working 54 hours per week.

By the time James Constable died in May 1900, the retail district was again moving northward.  On June 12, 1915 The New York Times reported "A new home for Arnold, Constable & Co. is being built on the former site of the Frederick W. Vanderbilt residence at the southeast corner of Fortieth Street and Fifth Avenue."  In anticipation, the Constable estate had leased the ground floor and basement of the Broadway store as well as the 18th Street building to Lesher, Whitman & Co., dealers in clothiers' linings.

Two months later The Real Estate Record & Guide announced that the estate had the architectural firm of Cady & Gregory to do $40,000 in renovations.   The elegant interiors where Manhattan's carriage trade purchased linens, gloves and gowns, were transformed to factory space.

Nathaniel Whitman was not yet 12 years old when he was hired in the clothing firm of Isaacks & Ranson on John Street.   He was still in his teens when he formed Lesher, Whitman & Co. with Stephen R. Lesher in 1852.   Now, more than 60 years later, the firm was well-known and respected among the garment industry.

Whitman's philanthropies to hospitals was also widely-known.  The firm routinely donated to charitable fund raising.  In 1915 the Hospital Saturday and Sunday Association listed Lesher, Whitman & Co.'s $200 donation; and its $100 contribution the following year (that amount would be about $2,300 today).

After decades of ownership, the Constable estate sold its properties in December 1950 for around $2 million.  Nos. 9-13 East 18th Street continued to house small manufacturers, and as tenants came and went over the decades, the 1883 facade remained relatively untouched.

Change in the neighborhood was evidenced in 1984 when the ground floor was transformed by the architectural firm MSG Architects into a cavernous, trendy restaurant space, America.  Co-owner Michael Weinstein told New York Magazine in September that year that he was "breaking all the rules" with the patriotic-themed space.

The article announced "The vast space will feature an oversize skylight, cast-iron columns, and a wrap-around mural by Anthony Grammenopoulos depicting symbols of the USA--the eagle, the Statue of Liberty, 'trains sweeping you across the country.'"

America was a success.  It was not only a destination restaurant and a favorite late night haunt of the younger crowd, but was a favorite venue for affairs.  On May 16, 1988, for instance, it was the scene of the dinner-dance to benefit the Roundabout Theater Company; and on May 1, 2000 the "post ceremony" celebration was held here following the 15th Annual Lucille Lortel Awards for Outstanding Achievement Off-Broadway. 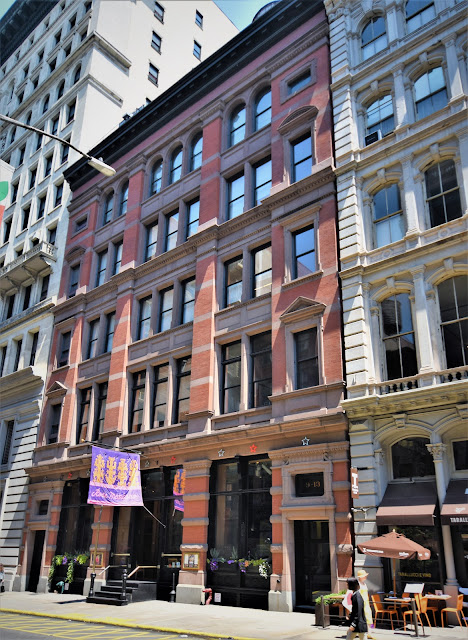 The ground floor continues as a restaurant today, with offices on the upper floors.  William Schickel's brick and brownstone design survives virtually intact after 125 years.