In 1819 the "canal" which gave Canal Street its name was covered over, creating an especially wide thoroughfare.  Isaac Lawrence recognized the potential and in 1821 erected a row of brick-faced Federal style homes on the northern side of the block between Mercer and Greene Streets.

Like their identical neighbors, Nos. 20 and 22 were three and a half stories tall and three bays wide.  Lawrence appears to have initially leased the homes and on May 1, 1825 his most celebrated tenant moved into No. 20.  Samuel F. B. Morse paid $400 a year for the house--about $850 a month today.

The 34 year old artist was already well-known.  Among his impressive commission were the portraits of President John Adams and President James Monroe.  His move to New York City and his rental of No. 20 no doubt had to with his receiving the commission from the City to paint the Marquis de Lafayette that same year.

A letter in American Jupiter: Letters and Journals of Samuel F. B. Morse reveals that he installed his studio here as well.  "My new establishment will be very commodious for my professional studies, and I do not think its being so far 'up town' will, on the whole, be any disadvantage to settled and begin to feel at home in my new establishment."

In 1826 Morse helped found the National Academy of Design in New York City and served as its president from 1826 to 1845.  It is unclear how long Morse remained in the Canal Street house, but he was definitely gone by 1830 when he traveled and studied art in Europe.  Later, of course, he would invent the telegraph (with others), the ground-breaking device that would forever overshadow his art.

In 1860 Canal Street was renumbered, giving the former Morse residence the new address of 321, while No. 22 became 323.  By now the area was less residential than commercial and both houses had been converted for business.

James Parrish had purchased No. 323 and moved his menwear factory and store in by 1861.  Throughout the Civil War years he produced custom dress shirts "made to measure."  He catered to the well-to-do; a shirt costing the equivalent of about $72 today.


Parrish retained ownership of No. 323 after moving slightly west, to No. 359 Canal Street, around 1867.  He leased the store and what were now called "upper lofts" to small businesses.  In 1868 H. Guilmed "from Paris" operated his wig shop here.  An advertisement in The New York Herald on August 19 that year touted "Large assortment of Human hair Switches; Invisible Wigs for ladies and gentlemen.  Manufacturer of all kinds of Human Hair Ornaments."

The store was home to Geo. Lisner & Bro., "lace and fancy goods store."  The store employed a 16-year old messenger boy, William Finnegan, who found himself in serious trouble in the spring of 1869.

Finnegan left the store on the afternoon of March 15.  According to The New York Herald "and two hours subsequently it was observed [that] money had been taken from the safe, near which the accused had previously been seen."  David Lisner had the teen arrested on suspicion of having stolen $75 (a little under $1,400 today).

"Finnegan strenuously denies his guilt," reported the newspaper on March 20, "says he can prove a good character, and Justice Dowling gave him an opportunity to do so.  The matter will be further investigated to-day."

Geo. Lisner & Bro. was already preparing to close shop.  An advertisement in The New York Herald on January 11 that year offered "For Sale--The lease and stock, or part of the latter, of one of the best paying retail Lace and Fancy Goods houses in the city."

It was a bad time for Parrish to lose his store tenant.  He advertised the "two upper lofts at 323 Canal Street, the upper part suitable for any light manufacturing business" in April.  With the Lisner brothers gone, his building was vacant.

Tenants, of course, came.  By 1874 S. Alexander ran his real estate office from the rear of the ground floor shop; dry goods merchants Bergenstein & Co. were in the store, and clothing maker S. Smoller's shop was in the upper portion of the building.

On Bergenstein & Co.'s staff was a young traveling saleman, Henry Shmal.  He took a liking to Ida E. Clarence--either for her personality and beauty or because she was surprisingly rich.

The New York Herald called Ida "a brunette, nineteen years old."  The daughter of a wealthy dry goods merchant, she lived in Newark, New Jersey.  Following her father's death in January 1876 Ida inherited around $50,000, making the teen a millionaire by today's standards.  Included in the bequest were two United States bonds valued at $2,000.

The newspaper explained on June 18, 1876, "Three months ago she formed the acquaintance of a young man named Henry Shmal...He paid attentions to her, took her to picnics and theatres, proposed marriage, and so far gained her confidence that she entrusted the bonds to him for safe keeping."

Somehow the fact that Henry was Jewish had evaded the girl.  When she figured it out, problems arose.  "On ascertaining subsequently that he was a Hebrew, she refused to marry him, whereon he ceased visiting her and refused to surrender the bonds or give any account of them."  Ida had him arrested on June 17.

In the meantime, Henry Holpp had opened his cigar store on the ground floor of No. 321 by 1887.  Among his stock he advertised Straiton & Storm's cigars.  Their cigars were presented not in the expected cigar boxes; but in colorful lithographed tins.

Unlike its next door neighbor, the rooms on the upper floors of No. 321 were leased to domestic tenants.  C. Edward Brown lived here in 1889; and Myron Strauss rented rooms in 1893.

In December that year Strauss was the victim of a brutal robbery.  It was the last straw for The Evening World, which ran the headline "BEGGAR-RIDDEN CITY, THIS" on December 9, 1893.  The sub-headline read "Tramps, Thieves, Thugs and Highwaymen Importune Citizens."

The article detailed several instances in which victims were robbed and assaulted by apparently homeless men.   Among the incidents was that of Myron Strauss, who was standing with his cousin, Rudolph Pechner on the steps of Pechner's home on East 116 Street, when "a strange, poorly-clad man accosted Mr. Strauss and asked him the time."

The man was not alone.  "Two confederates of the tramp slipped up behind Mr. Strauss and sandbagged him.  His cousin came to the rescue, and he, too, was roughly handled.  The men escaped.  These are but a few of the many instances that might be mentioned."

Within the next year or so the upper floors of No. 321, too, were converted for factories.  By 1895 P. J. Hughes operated his cap-making shop here, employing just two women who worked 53 hours a week.

Bulmer Stationery and Printing Co. was in No. 323 at the same time.  The firm would remain in the building at least through 1918.

No. 321 saw a procession of tenants throughout that period.  C. L. Jones, paper and twine dealers, was in the building in 1901, while the upper portion was home to S. Levy & Co.'s cloaks and suits factory; and clothing makers Eiseman, Keiser & Co.  By 1921 Anderson & Prigge, Inc. had moved in.  The printing firm manufactured office stationery like its "bill and charge systems."

As mid-century approached the Canal Street block the apparel and printing industries had moved away.  The district saw an influx of plastics firms, plumbing stores and low-grade shops.  As World War II drew to a close, the Met Exchange opened in No. 323 in 1944.  It would remain here for years selling Government surplus.

An advertisement in Popular Mechanics in November 1946 gave a hint at the broad array of items available.  "Government surplus made of brass, bronze, dural steel and stainless steel...100 gears, better assortment, including worm sets...Write for our bulletins on ball bearings, rectifiers, relays, selsyns, horns and government surplus materials."

In 1947 it shared the building with the Blue River Plastics Mfg. Corp.

The 1970's saw The City Dump take over the ground floor of No. 323.  Arthur Frommers' Guide To New York explained its offerings as "brand-name goods which the owners have bought at auctions or as overruns, and which they sell at less than dealer's cost."  The City Dump was a popular spot to browse through a vast variety of bargains for years.

Bond Metal Surplus Co. operated from No. 321 in the 1980's; and at the turn of the century Canal Video, Inc. was in No. 323.  But decades of neglect were taking a toll on the venerable buildings.

In 2013 the brick facades were deemed "unstable."  Both buildings were owned by the Laboz family's United American Land, the largest owner of property along Canal Street.  In July the firm filed for an "emergency deconstruction" of the the front and back facades.  The Landmarks Preservation Commission approved plans to remove the facades, store the nearly two-century old bricks, and use them in the reconstruction.

It took two years for final plans to be approved and zoning to be tweaked (the industrial zoning of the block did not include residential use).  Page Ayres Cowley Architects headed the renovations, which extended the buildings to the rear, installed new store spaces on the ground floor, and apartments above. 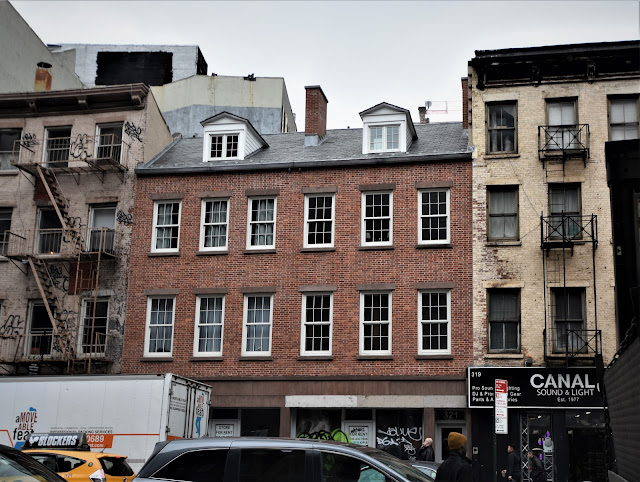 The completed renovations--with the venerable bricks back where they belong--closely echo the appearance of the buildings in the late 19th century.