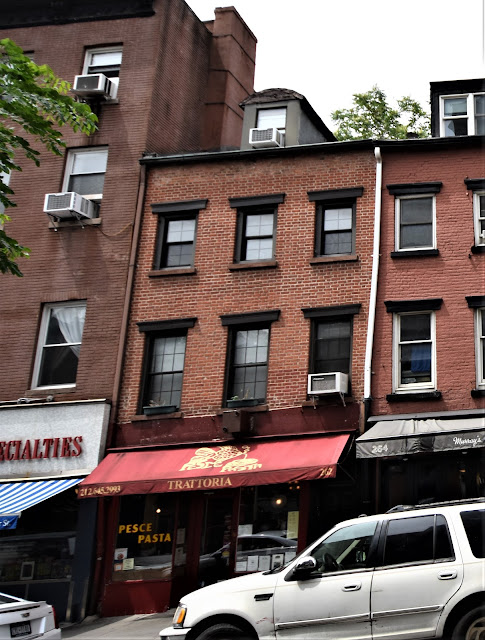 When Charles Oakley married Margaret Roome in 1810, he was listed as a "merchant."  He was also an attorney.  But it was for neither profession that he would become well-known.  By the 1830's Oakley had become perhaps the most prolific real estate developer in Greenwich Village.

He responded to a population explosion, caused in part by masses fleeing a yellow fever epidemic in the city, by erecting scores of homes; many intended for working or middle class families.  That the new residents would need clothing, food, hardware and other essentials was not lost on Oakley.  Around 1833 he completed a row of five brick-faced houses on the west side of Bleecker Street, between Morton and Leroy Streets, each with a shop on the ground floor.  (Oakley had petitioned the Common Council of the City of New York on March 9, 1829 to change the name of Herring Street to Bleecker Street.)

The first in the row was No. 248 which, like its identical neighbors was three-and-a-half stories tall, including the store.  Faced in Flemish bond red brick and trimmed in brownstone, a single dormer perched above the roof line.  Originally a plain wooden fascia board would have run below the cornice.

James Sinclair, a carpet weaver, leased the shop from the Oakley family by 1835.  He lived not far away at No. 102 Barrow Street.  The upper floors were leased at the same time to James Germond and Samuel Helmes, both carpenters.  Tenants upstairs continued to be working class.  In 1841 the occupants were James Moore, "newsman," and James J. Tompkins, a "carter."

By 1848 Robert Chapman had opened his "fancy goods" store at street level and lived above the store.  Also living here was William Warner, who operated his hosiery store in the rear, at No. 248-1/2.

For some reason the stores came and went rather quickly.  The following year William Partridge opened his tea store here, and like his predecessors, he lived upstairs.   Partridge remained through 1851, sharing the upper portion of the building that year with James Berry, a clerk.  The tea shop was replaced by George Creamer's crockery shop in 1852.  He, too, lived in the building.

By 1858 Matilda McLaughlin ran her "fancy goods and embroidery" shop at street level.  The following year Bleecker Street was renumbered and the house and store received the new address of 262.

The store became home to Wilson & Mills tea store by 1880, run by Thomas Mills and William Wilson.  Neither men lived in the building; Mills living far to the north at No. 111 East 70th Street and Wilson much closer at No. 37 Charles Street.  The upper floors seem to have been crowded.  Renting rooms in 1880 were Justus Shaw, who ran a frame shop on Pearl Street; Edward H. Clark, John C. Bray, and Alfred W. Gee.  Alexander Speers, who was the building's superintendent, most likely lived in the cellar. 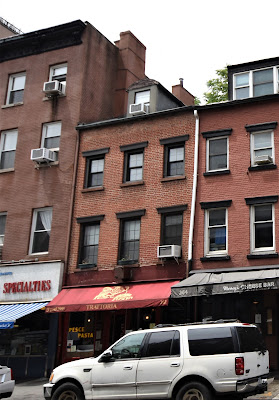 By now Minetta Lane, about three blocks away, had become the center of New York City's black population.  Many were former slaves who had fled insufferable conditions in the South after the war.  Helping to organize them and fight for social and political rights were literate leaders like William Freeman.

By 1879 he was Chairman of the Colored Republican General Committee.  He organized fund raising that year for relief of black refugees who had swarmed to Kansas hoping for a better life, only to find misery.  The Governor of Kansas, John P. St. John, sent Freeman a thank-you letter for the $250 in July, saying in part

Of the numbers coming here, at least 75 per cent are in a destitute condition, being very scantily clothed, and without bread or the means to obtain it, consequently are dependent wholly upon the charities of the people of the North.  I am very glad to know that the colored people of your City are taking an interest in relieving the unfortunate of their race.

He ended his letter with saying "This is the second emancipation, and under it we want to make the blacks absolutely and forever free."

On December 8, 1884 Freeman held a meeting of "colored citizens," as described by The New York Times, at No. 262 Bleecker Street, most likely in a cellar room.  A resolution was read that stated that "as the relation of the colored men to the politics of the country had become doubtful, it was their duty to meet and to discuss this question and to determine the real position and status of the colored race as a factor of the great body politic."

The meeting was in preparation for a "colored mass meeting" to be held at Chickering Hall on December 29.  Freeman had invited Frederick Douglass to address that meeting.  Douglass responded with unexpected pessimism.  The New York Times reported "Mr. Douglass wrote that he did not see how the meeting could add anything to the knowledge already possessed upon the subject and afford a basis for issuing an an address."  He did say he "might" attend.  "Until then he would restrain his curiosity, hope for the best and prepare for the worst."

The string of businesses in the shop space continued.  In 1890 it was home to Jacob Stein's fancy goods store.  In 1894 the upper floors were internally joined to No. 264 with no change at street level.

The turn of the century saw the personality of the Bleecker Street neighborhood changing again as it filled with immigrants.  George Foscolo and his family--his wife Persefoni, their 5-year old daughter Marie, and Persefoni's brothers, Edward and Louis--arrived in New York from Greece in 1902.  George's hopes for happiness in the new land were soon crushed.

By 1907 the entire family was living at No. 262.  Trouble first came in December that year when Persofoni left; lured away to a life on the stage by  actors George Karlis and Heraclea A. Aggelidu.

George hired a woman to help care for Marie.  On May 24, 1908 she dressed Marie for a stroll.  But when she went downstairs where Marie was supposed to be waiting, the girl was gone.  There was little doubt that Marie's uncles were responsible.  Edward and Louis disappeared at the same time.  George told police he thought the girl was taken to her mother.

In a rather odd side note, The New York Times ran the headline "TWELVE-TOED GIRL MISSING" and reported "Marie Foscolo, who, according to her father, has twelve fingers and twelve toes, is supposed to have been kidnapped from her home."

Six months later George will had not found his daughter.  The Sun reported on November 25 that he had obtained a writ of habeas corpus "commanding his wife, Persefoni Foscolo, to produce in court their five-year-old daughter."  In the court papers he declared "his wife had left him to go to the stage" and "that she was unfit to have the custody of a young child."

As the face of the Village changed, so did the retail shop in No. 262.  During World War I it was Klapper's Baby Store, Inc.  Run by Max and Rae Klapper, it sold infants' wear.   The Depression years saw The Italian Store Co. here, a food shop specializing, not surprisingly, in Italian items.

The Italian Store Co.'s presence reflected the neighborhood's location on what was now the hem of New York City's Little Italy.  Subsequent businesses carried on the theme.  In the 1980's Zampognaro was here.  On July 23, 1986 The New York Times food writer Florence Fabricant remarked that Italians traditionally stored their oil oil in "terra-cotta crocks" and pointed out that Zampognaro's was "the first New York retailer to stock it this way.."

The following year journalist Marian Burros reported that Zampognaro's was one of the few locations in the city where authentic focaccia--an Italian "snack" that is often compared to pizza--could be purchased.

By 1995 Zampognaro's had given way to Trattoria Pesce Pasta, a restaurant that offered what New York Magazine described that year as "Good old Italian comfort food."   More than two decades later it is still here. 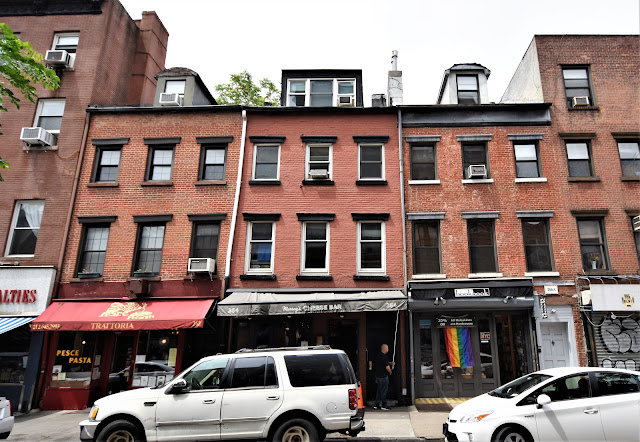 No. 262 Bleecker Street, along with Nos. 264 and 266, amazingly retain much of their 1833 appearance when Charles Oakley was changing the face of a once-sleepy hamlet.