An Abolitionist, A Cop and Murdered Brothers - 48 Commerce Street 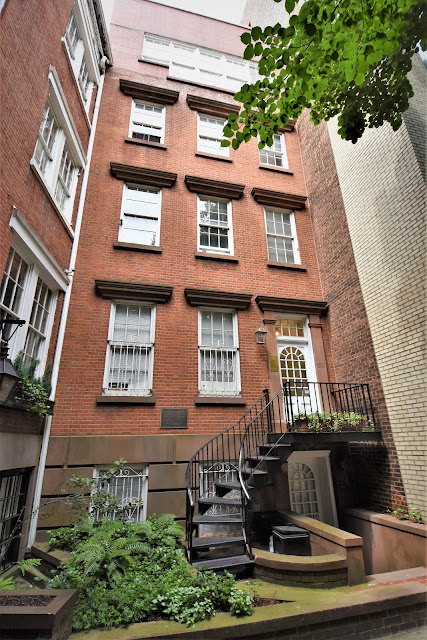 Alexander Turney Stewart arrived in New York in 1823 from Lisburn, Ireland.  He established a small dry goods store with lace and linens he brought from Ireland, purchased with inherited money.  By the 1840's his emporium was the largest in the world, with branches in several countries.  He wisely invested a portion of his wealth in real estate.

The two-block long, elbow-shaped Commerce Street had been opened around the turn of the century.  Stewart acquired the building plots at the sharp curve, Nos. 46 and 48, from Trinity Church.  In 1844 he erected two brick-faced Greek Revival homes at right angles to one another on the site.

The 19-foot residence was handsome but unexceptional.  That it was intended for a middle-class family was surprising, given that steps away at No. 38 Commerce Street was Alexander McLachlan's brewery.

When No. 48 was competed John H. Dey was 22 years old.  Born in Varick, New York, he was the editor of the Geneva Courier and was active in the local temperance movement.  He married Emeline Matilda Cowles in 1848.  Around the time of the Civil War he became associate editor of The New York Evangelist, an anti-slavery gazette published by the American Bible Tract Society.

The house was the scene of Ella's wedding on October 12, 1876.  Her marriage to James A. Baird, the son of John Baird, vice-president of the Metropolitan Elevated Railroad, was celebrated by the Rev. Robert Russell Booth.

The minister was, incidentally, a powerful and well-known orator.  In his notable sermon, "Personal Forgiveness and Public Justice," in the Mercer Street Presbyterian Church on April 23, 1865 he blamed the assassination of Abraham Lincoln in part on Lincoln's compassionate treatment of the rebels.  He said in part:

Our Government needed an infusion of Old Testament severity rather than New Testament tenderness, and it seems clear that God has intended, by this sudden and appalling calamity, to bear our remembrances to those truths of distributive justice which stand out so clearly in His dealings with Israel of old.

When John and Emeline moved to Pelham Manor in 1878, the newlyweds joined them.  Tragically, the following year John Baird unexpectedly died.

Alexander T. Stewart had died in 1876, one of the wealthiest men in America.  His widow, Cornelia, inherited his vast real estate holdings.  Her next tenants in No. 48 Commerce Street were the Gabriel Aiguier family.

Aiguier was 49 years old when he moved into the house.  His wife, Johanna, was 12 years younger.  The couple had seven children: Johanna, James, John, Lizzie, Elinor, Gabriel, Jr., and Margaret.  James and John were both employed, working as store clerks, and Gabriel, Jr. was a freshman at New York City College (the only son to seek higher education).

Aiguier was a veteran police officer, appointed to the police force on November 30, 1853.  By now he had weathered tense events.  He was stationed at the New York Tribune office when it was attacked by a savage Draft Riots mob in 1863; and was on duty during the violent Orange Riots of 1872.

After a career of 35 years, Aiguier retired in 1888.  It was around that time that he moved to Brooklyn.  When he died there on December 6, 1903, The New York Times entitled his obituary "Death of an Old Policeman," and noted "He never tasted tobacco or liquor."

By then Prescott Hall Butler owned No. 48.  Cornelia Stewart had died in 1886 and in December 1891 her estate distributed the extensive property holdings among the children of her sister, Louisa C. Butler.  (The New York Times claimed the massive pile of deeds weighed five pounds.)  It was most likely Butler who added the heavy, cast metal cornices over the windows.

Butler continued to lease the house until March 1900 when he sold off his multiple Greenwich Village properties.  The Blesch family would own No. 48 for years. 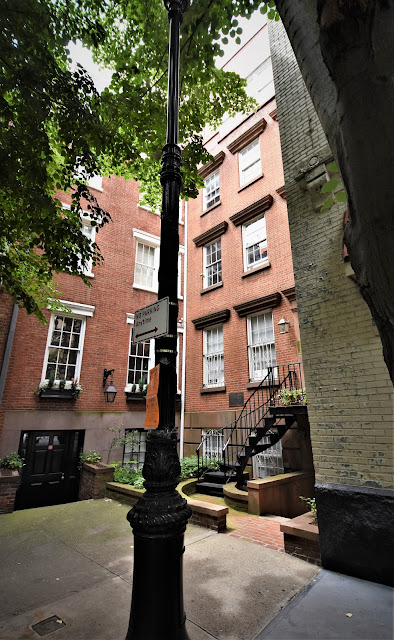 By the post-World War I years the Greenwich Village neighborhood had changed.  Many of the old brick houses had been razed and replaced by apartment buildings, and an influx of immigrants gave the district a diverse personality.

The Gillen family was living at No. 48 Commerce Street in 1920.  Mrs. Gillen was a widow and lived here with her two young adult sons.  She was awakened on the night of February 21 to find three men holding up her unsteady son, Patrick.   They told her he had "been drinking and would be all right shortly."  After they left, according to The Times, "it was found Patrick had been stabbed in the head and was dying."  The young man did not survive the night.  His funeral was held in the house at 7:00 on the morning of February 25.

A few weeks later, on March 21, the Young Republican Club was the target of a holdup.  The 13 members inside were robbed of $200 in cash and jewelry.   Two men were arrested on March 24, charged with being implicated in the robbery.  More importantly, Detective Campbell asked for "heavy bail" for 19-year old Thomas Falasca, telling the judge "he believed Falasca to be the man who stabbed Patrick Gillen to death."

There were three men involved in Patrick's death, however, and his older brother vowed to find the other two.  John J. Gillen, who worked as a longshoreman, enlisted close friends to work with him in finding the men responsible.  It was a dangerous quest that did not go unnoticed.

At the time John had been seeing 18-year old Elizabeth Seeley, who lived nearby on Christopher Street, for about a year.  Friends were sure the couple would soon be married.  On Saturday night, November 19, 1921 John took Elizabeth to the Cinderella Tea Room (an innocent-sounding name for what was in fact a speakeasy) at No. 9 Cornelia Street for dinner and dancing.

The New York Herald reported "They danced until almost midnight and the place was being made ready for closing when...a man sent in word he wanted to speak to Gillen 'for just a minute,' and Gillen without hesitating went to the door."  When John got to the door, there was no one around so he stepped into the dark street.   In the darkness an ambush awaiting.

A volley of shots rang out and, according to the New-York Tribune, 25-year old John fell to the pavement crying, "I got it!  I got it!"  Hearing the shots, Elizabeth had rushed to the doorway.  She was confronted by a man who stepped over Gillen's body, brandishing a revolver.  The Tribune reported "The man eyed her for a moment, lowered his weapon until it pointed at her feet and pulled the trigger.  She fell."

His brief appearance in the lighted doorway exposed his face.  Elizabeth and several of the terrified patrons recognized him.  With both Gillen and Elizabeth wounded and bleeding, the people inside were too afraid to step out of the speakeasy where the assailants might still be lurking.  It was a passing taxi driver who saw Gillen in the street who picked him up and drove him to St. Vincent's Hospital.  He did not notice Elizabeth, who would have to wait.  John died on the way to the hospital.

Elizabeth was also taken to St. Vincent's; however she was, understandably, "unable to tell a coherent story."  The teen may initially have been terrified to name the murderer, as well.

An early theory that Gillen's murder "had its cause in the jealousy of a man he knew" (the police said he "had been friendly with a married woman") was quickly dismissed.   Elizabeth and Mrs. Gillen provided names and descriptions and on November 27 three arrests were made.  The gangsters were shockingly young--James Rogan was 22, John O'Connell 25, and Joseph Connelli was just 18 years old.

Rogan had recently been released form prison for stabbing two men in Midtown, Connelli had been released on a suspended sentence, and O'Connell had been sentenced to a year or longer for an attack on a Greenwich Village girl "whom he lured from her home by a false message purporting to have come from a girl friend."  The three men were positively identified by Elizabeth and other patrons of the Cinderella Tea Room.

On April 21 1922 Judge McIntyre imposed a 20-year sentence in Sing Sing on John Rogas.  He took the opportunity to express his opinion on New York youth and on speakeasies.  He said the youth of the city "had run wild during the last five years" and said that because New Yorkers did not like Prohibition, they "had an idea they could violate the law with impunity."

"This defendant was in one of the hellholes of this city," he raged on.  "Such places should be closed."

Now left alone, the murdered boys' mother may have been the last to live at No. 48 Commerce Street while it was still a private home.   On January 23, 1926 it was purchased by Winifred Wilson and Anne Hoody who announced "It is to be remodeled into high-class apartments."   The stoop was removed and the entrance moved to the basement level.  A fourth floor studio was added with expansive windows, topped by a brick parapet.

The new wives were given strong advice from Commander Harry Manning, who said in part, "If your husband likes the sea, don't nag him to quit it."

Another tenant doing her part in the war was Jean P. Smith, a lieutenant in the Women's Air Corps.  She was among the first large contingent of the WACS to be deployed to the Southern Pacific area, landing in Sydney, Australia on May 12, 1943.  According to The New York Times, their male counterparts were less interested in their military contribution than in potential romantic companionship.

"Perhaps not since the first American soldiers arrived in this country, Dec. 23, 1941, has there been so much public interest in any event involving Americans.  American fighters, anxious for a sight of girls from home--for many of them the first in two years--sought to 'make dates' as the girls got off the boats."

In 1968 a renovation resulted in a duplex in the basement and first floor, and two apartments on each upper story.  It was apparently at this time that a metal stairway was installed.  Despite its alterations, the house, hidden in the crook of Commerce Street, remains an important presence on the picturesque block.