In the 18th century in England, elegant rowhouses designed to appear as a single structure began appearing in fashionable cities like Bath.  By the Regency period London's wealthy were living in similar developments along Regent's Park designed by leading architects like John Nash.  The idea took root in New York City with La Grange Terrace.

At the turn the 19th century Lafayette Place extended only as far north as Great Jones Street.  In the area between Great Jones and Astor Place was an entertainment hall, Vauxhall Garden, established by Frenchborn Mssr. Delacroix who offered a variety of amusements.  John Jacob Astor purchased the plot in 1804 for $45,000 and Delacroix continued to pay rent on the space for another 20 years.

By 1826 Lafayette Place was extended north where it ended in a cul-de-sac at Astor Place.  Here, in 1831, Seth Green, an Albany builder and speculator, envisioned the grandest homes outside of London.  The nine houses he began building would become known as La Grange Terrace, named after the country estate of Marquis de Lafayette.  When completed in 1833 in what by now was the fashionable Bond Street area, they were unparalleled.


Clad entirely of white marble they boasted 15-foot deep yards to the front.  The first floor projected eight feet, above which a two-story high colonnade of Corinthian columns (cut by prisoners from Sing-Sing) supported the cornice.  Tall French doors opened onto the balconies where the columns were connected by wrought iron railings.   Elegant marble wreaths lined up over each door and window lintel and carved antefixae lined the roofline.  Low marble porches extended to the sidewalk.

Each 27-foot wide residence had 26 rooms.  Astonishingly, the owners enjoyed an ingenious form of central heating, indoor toilets, a "bathing room," and both hot and cold running water -- comforts that would not become common for nearly a century.  Inside mahogany doors swung on silver hinges.  Marble mantles were installed under deep plaster ceiling details and carved Grecian columns separated the parlors. 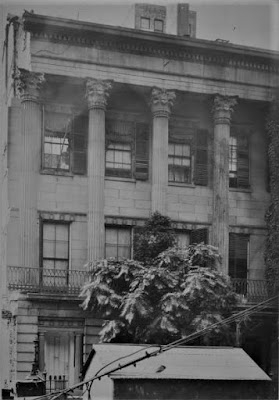 The row became home to come of the city's most esteemed families.  John Jacob Astor II took possession of No. 424.  Cornelius Vanderbilt and Washington Irving lived here as did Warren Delano, grandfather of Franklin Roosevelt.  And when President John Tyler courted Julia Gardiner, it was at her father's home at No. 430.  Across the street the Astor Library was built and, nearby, the Opera House.

In 1851 Israel Underhill purchased Nos. 43 and 45 and transformed the residences into a "family hotel" called The Oriental for members of the upperclass who did not care to "keep house."  Here wealthy families could enjoy the status of the address and the comforts of the Terrace without the bother of maintaining their own staff of servants.

The trend of New York's priviledged, however, has always been to move northward ahead of the commercial district.  By the 1860s millionaires moved northward into Murray Hill and Fifth Avenue.  The Bond Street district began changing as the wealthy, one-by-one, left La Grange Terrace.

In 1875 the five southern-most houses became The Colonnade Hotel with an entrance on Broadway.  By the turn of the century they had been dynamited, leaving only the four houses that remain today.  The Oriental lasted as a boarding house until 1915, a few years after the Lagrange porches and yards had been stripped away to enlarge the sidewalk.  In 1918 an unsightly two story addition was added to the roof of Nos. 42 and 43.  The demise of the grandest residential development in city history was well on its way.

Ignored and forgotten La Grange Terrace, which at some point began being known as The Colonnade, continued to deteriorate.  A hodge-podge of shops infiltrated the street levels.  The marble, attacked by acid rain and vehicle exhaust, eroded.  Floors sagged.  The graceful marble artefixae along the cornice fell away until today they exist only on the northernmost house. 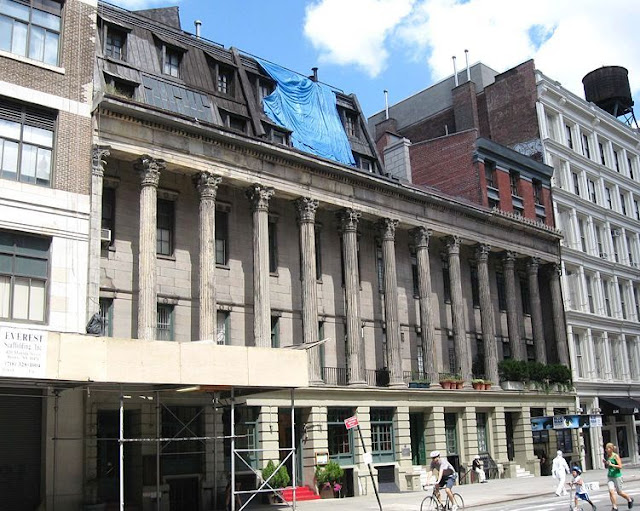 In 1965 the Landmarks Preservation Commission gained landmark designation for La Grange Terrace, touting it as "...four remaining town houses which are unified in appearance by a beautifully executed two-story Corinthian colonnade.  The group is one of the treasures of our architectural heritage and is a superb example of civic-minded planning." 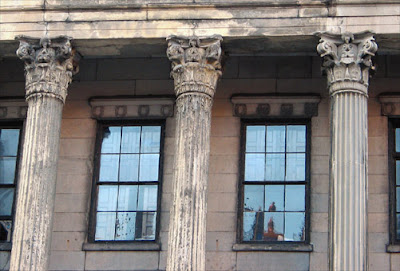 Unfortunately, landmark designation does not ensure preservation nor restoration.  Today the once-imposing marble houses are in a heartbreaking state of deterioration.  But even in their present condition, they are a remarkable relic of an elegant age. 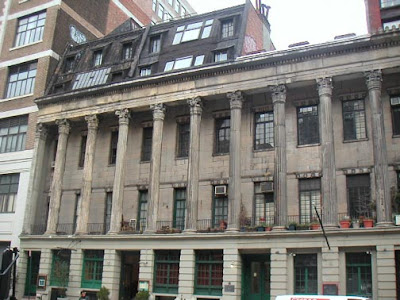