Darius Ogden Mills knew about working to improve one's condition in life.  Starting out as a clerk in North Salem, New York he followed the California Gold Rush in 1848 not to join in the risky business of mining, but to establish businesses essential to the miners -- first opening a bank, then the Virginia and Truckee Railroad (the only connection between the Comstock Lode and the Union Pacific Railroad).  And then more banks.  By the time of his death in 1910 he had amassed a fortune of over $34 million.

Upon his return to New York City and retirement, Mills turned his attention to philanthropic works and the social reform movement that was becoming popular with progressive-minded activists towards the end of the century.  He was most concerned with the plight of working-class men who struggled to make ends meet.  According to The New York Times on November 27, 1898 "He saw that men capable of earning barely enough to eke out a living amid unclean and unhealthful surroundings were dangerously near pauperism or criminality."

Mills envisioned clean, healthful hotels in which men could get themselves on their feet.  "One of my objects," he said, "was to encourage men of limited means to practice economy by enabling them to live comfortably at a very small outlay."  For his Mills House #1 (there would be two others in time), he targeted the block on Bleecker Street between Thompson and Sullivan Streets where the dilapidated Depau Row sat.

When Depau Row opened in 1840, the six refined, connected homes offered their owners class and luxury.  An 1840 ad for one of the homes marketed it as "finished in a costly manner, the hall lined with Italian marble."  Uniquely, all of the drawing rooms in the six houses had connecting doors which could be thrown open for huge parties or balls, creating a block-long suite.  A. T. Stewart, the dry goods magnate lived in No. 6 before building his marble mansion on Fifth Avenue.  Most unusual, however, was the two-story veranda of ornate ironwork running the length of the building -- reminiscent of New Orleans or Charleston. 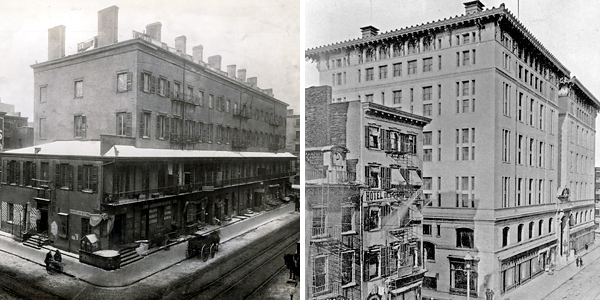 By the time Mills eyed the property, however, it was decrepit.  The Galveston Daily News reported that in the 1890s many of the rooms were sweatshops "inhabited by scores who filled the high-ceilinged rooms with the odors of garlic."  One bedroom, it noted, housed a family of five in squalor under the original trompe l'oeil painted ceiling.

In 1896 Mills razed the houses and began construction on Mills House #1, employing architect Ernest Flagg.  His choice of Flagg resulted from the architect's progressive interest in advancing sanitation and health through his designs.  For improved ventilation Flagg employed two ten-story airshafts, or smoking courts, covered with huge glass skylights that could be opened or shut as the weather demanded.  The walls of the 1,554 rooms did not meet the ceiling in order to enable air circulation throughout.

Each small, clean room was offered for 20 cents a night.  Social reformer Jacob Riss commented that "His room is small, but the bed for which he pays twenty cents is clean and good.  Indeed, it is said that the spring in it was made by the man who made the springs for the five-dollar beds in the Waldorf-Astoria..."  For the cost of a room the men could also enjoy smoking and writing rooms, a library, "baths when he feels like taking one," and a laundry to wash his clothes.  By offering these free distractions Mills hoped to divert the men from less appropriate pastimes like saloons or worse.

Although he was giving the men a helping hand, Darius Mills insisted that they help themselves.  "No patron," he said at the opening ceremony, "will receive more than he pays for, unless it be my hearty good-will and good wishes.  It is true that I have devoted thought, labor and capital to a very earnest effort to help him, but only by enabling him to help himself."  He had no intention of encouraging sloth -- every resident should be out during the day either working or seeking work.  For that reason the hotel was locked from 9 am until 5 pm.

In the basement was a restaurant where, for 15 cents the roomer could enjoy a full cooked meal.  The roomers could have two hot meals and a bed for the total cost of only 50 cents a day.


For decades Mills' pioneering concept of helping men by enabling them to help themselves rather than by giving charity flourished at Mills House #1 and the two subsequent Mills Houses.

In the 1970's the building was converted to apartments; however the facade remains virtually untouched including the deeply overhanging copper cornice with its graceful scrolled iron supports.  Inside, the roomy courtyards and great glass skylights survive -- reminders of a time a century ago when men, hard on their luck, found an affordable place to stay.
Posted by Tom Miller at 8:10 AM