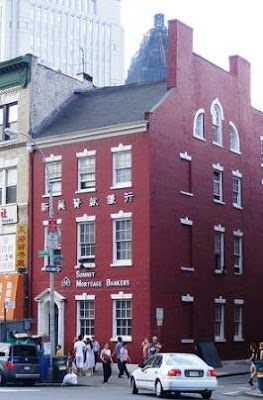 Life was good for James DeLancey during the British rule in New York.  He owned an estate in Westchester County, property in Manhattan and a farm north of the city.  His problems started with the American Revolution.

Wanting to cover all his bets and unsure of which side would win the conflict, DeLancy straddled the political fence.  He secured a seat in the New York Assembly in 1768 by winning the support of the Sons of Liberty who rallied against British control.  In the meantime, however, he was rubbing shoulders with the Crown, meeting secretly and assuring his loyalty.  That all ended when in February 1775 he was exposed as a loyalist in the legislature.  By May he had left New York never to return.

On March 6, 1777 the Provincial Congress appointed Commissioners to "take into their custody & possession all the personal property" of loyalists with ten days' notice.  The families were allowed to keep their clothing, a few pieces of furniture and three months' provisions.  Everything else was sold at public auction.  Things got worse for the loyalists when, on October 22, 1779 the Congress passed "An Act for the forfeiture and sale of the estates of those who have adhered to the enemies of this state."  Loyalists were banned from the state under penalty of death "without benefit of Clergy."

When the Commissioners of Forfeiture auctioned off DeLancey's property in 1785, estimated at $50,000, Edward Mooney was there.  A high-profile player in the colonial wholesale meat business, he was also the representative of the City's butchers in the Society of Mechanics and Tradesmen.  He purchased the lot at the corner of Bowery and Pell for his new residence. 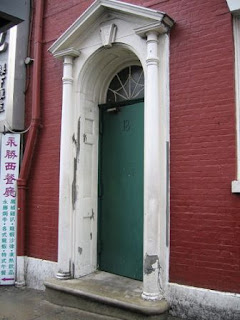 Mooney built his house sometime between the auction date, just after the British fled New York, and 1789, the year Washington was inaugurated on Wall Street.  It represents the newer Federal architecture while holding on to some of the traditional Georgian designs.  A beautiful deeply-set arched Georgian doorway flanked by slender columns displays a fanlight with delicate spiderweb tracery.  As with the stone window lintels, a double keystone block crowns the entrance.

Between the paired chimneys on the Pell Street side, an arched window with its original 18th Century mullions is flanked by two quarter-round windows.  Inside, beneath the handsome gambrel roof the hand-sawn timbers can be seen.  A few interior details original to the house remain including window trims and frames.

Edward Mooney lived in his house until his death in 1800.  Seven years later the size of the house was doubled by an addition to the rear.  The original oval-shaped handrail on the staircase in that section still exists.

By the 1820s the house had been converted to a tavern and would never again be used as a private residence.  During the 20th Century it went through many transformations including a hotel, poolroom, brothel, store, restaurant and a Chinese club.  Through it all the exterior of the house remained virtually unaltered, save for the unfortunate green metal entrance door seen today.

Upon designating the Mooney House a landmark in 1966, the Landmarks Preservation Commission remarked that it "has a special character, special historical and aesthetic interest, and value as a part of the development, heritage and cultural characteristics of New York City."  It added that it is the only extant townhouse from the American Revolutionary period.

The neighborhood has drastically changed.  Once part of a quiet street of 18th Century homes, the Mooney House is now surrounded by New York's bustling Chinatown.  One of the last survivors of colonial New York, it was restored in 1971 and today houses a bank.
Posted by Tom Miller at 6:51 AM