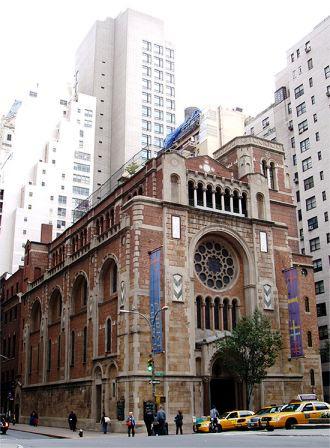 Timing is everything.  And if the leaders of Christ Church, Methodist Episcopal did not know that in September of 1929, they found out very quickly.

In the early 20s, the congregation, originally called the Madison Avenue Methodist Episcopal Church was rapidly outgrowing its Romanesque 1882 R. H. Robertson-designed structure on Madison and 60th Street.  A plot was purchased one block away on the northwest corner of Park Avenue and 60th Street in 1929.  The title was signed in September -- exactly one month before the Stock Market crash and the onset of the Great Depression.

Using the funds from the sale of the former church and land, plans went on.  The church, now officially renamed Christ Church, Methodist Episcopal, of New York City retained architect Ralph Adams Cram --reknowned for his ecclesiastical and collegiate buildings -- to design the new structure.  Having just finished a 22-year position as Supervising Architect of Princeton University, Cram had earned his reputation with such commission as The Cathedral of St. John the Divine and 5th Avenue's St. Thomas Church.

While Cram was highly recognized as a master of Gothic design, he chose a combination of Romanesque and Byzantine styles for the Park Avenue church.  Protestants, he explained, were "adverse to Medieval Catholicism both by inheritance and doctrine."

Anything but light and airy, Cram's building -- at once sophisticated and rough -- combined brick and stone, pillars and arches to create the illusion of a venerable, centuries-old structure.  Its solid mass is softened by the deep 60th Street arches and the pillared gallery of the top-most level.

Cram's plans included a sanctuary seating 800 congregants, a chapel that could accomodate 110 and a parish hall large enough to hold 250.  Included in the complex was a parish house incorporating a gymnasium, clubrooms, a men's lounge and women's parlors.  The nave and chapel were dedicated November 26, 1933 however the Depression finally took its toll.  Funds ran out and no interior work could be done.  Unadorned grey concrete walls would surround the congregation for years.

Timing is everything.  Just as the Great Depression started to ease it's grip, World War II broke out in Europe and two years later in 1941 the United States was drawn in with the attack on Pearl Harbor.  The resulting shortages in materials prevented any interior work being done on Christ Church until 1948. 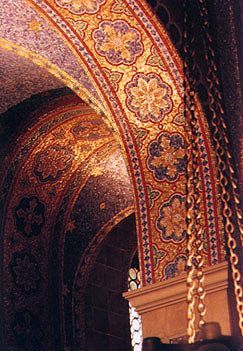 Finally in the summer of 1949 the breath-taking sanctuary was complete.  Drawing on the Byzantine mood of the architecture the interior was encrusted with over 7 million Venetian mosaic tiles covering 14,000 square feet.  Thirty-four separate types of marble were used.  The generous use of gold tiles is visually staggering.  There is not a new visitor who enters the sanctuary without gasping in awe.

The Episcopal roots of the church are evident in several physical aspects.  A decorated choir screen hides the choir from the congregation -- unheard of in Methodist tradition.  Behind the altar are 16th Century icons from the collection of Czar Nicholas II; flanking the choir screen are a pair of 17th Century doors removed from a Russian Orthodox cathedral; and filling the half-dome above the altar, rather than the expected Methodist cross, is a majestic seated figure of Christ. 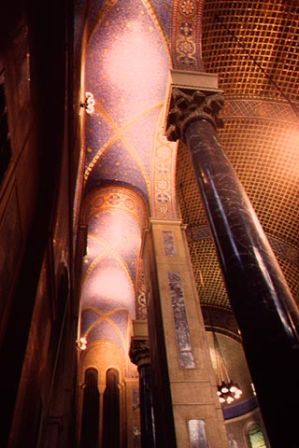 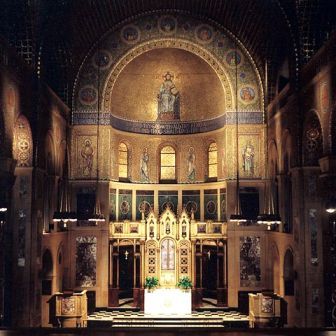 Now called Christ Church United Methodist, it took nearly 20 years to complete, but the result is one of the most remarkable churches and visually overpowering interiors in the city.  The church conducts tours of the sanctuary on Sundays after 11:00 services.

non-credited photographs taken by the author
Posted by Tom Miller at 6:36 AM