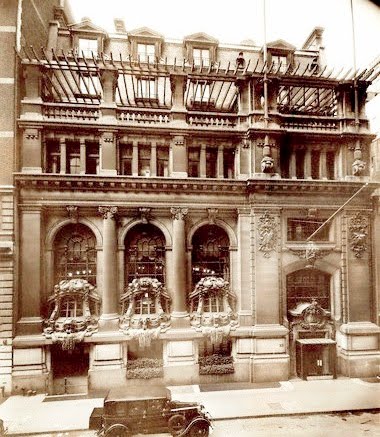 The New York Yacht Club had been around for nearly half a century in November of 1898 and, until then, was happily esconced in a series of unpretentious clubhouses.  As the century came to a close, however, yachting had become the pastime of the wealthy and a more suitable headquarters was required.  From the Club's rooms on the second floor of a Madison Avenue townhouse, J. Pierpont Morgan started the ball rolling for a new location.
He announced that he would donate three lots on West 44th Street for the new building.  In return for giving the land Morgan demanded to choose the committee that would select the winning design:  himself.  The guidelines for the architects were published on November 5 with a 30-day deadline for completed designs.  The new clubhouse must have a Model Room adequate to exhibit the Club's extensive collection as well as doubling as a meeting room for 300 people.  A Library was required that could archive 15,000 books and a Chart Room was necessary where members could map out their cruises. 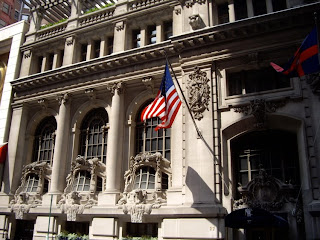 Morgan settled on the submission by the firm of Whitney Warren and Charles Wetmore -- their first important commission.  Whitney Warren produced the drawings and his ideas were unique at best.  He wanted to reflect the nautical foundation on which the Club was built.  His 5-story limestone structure is exhuberant Beaux Arts, overflowing with maritime themes.  The Club, he explained, has a mission of furthering "naval architecture from the amateur point of view."  And that he did.

Especially noticeable from the street are the three major windows fronting 44th Street.  Mimicking the sterns of the Dutch galleons that first came to New York, they spill stone waves over the window ledge.
A large terrace on the fourth floor, covered by a heavy wooden pergola, looks enticing from street level.
Inside Warren let go of any inhibitions.  His Model Room sits directly behind the great galleon windows, is 100 feet deep, over two stories high and rests under an enormous and colorful stained glass ceiling.  Free-standing sea monsters add support to the great marble fireplace, the centerpiece of which is a painted yachting scene.  A balcony in the style of a galleon railing circles the room. 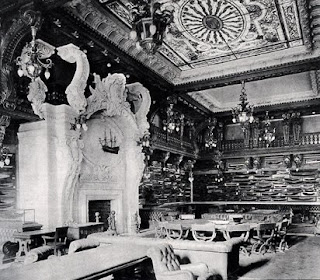 The Architectural Review, upon the Club's opening in 1901, was not pleased.  It called the robust fireplace "a riot of swags and spinach, icicles and exotic vegation."  It was not, said the editors, "legitimate architectural design."
Courtesty Office of Metropolitan History 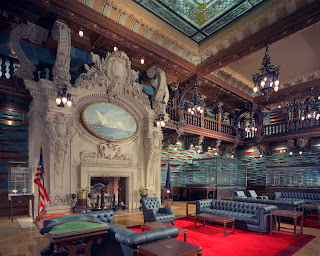 A bit kinder, The New York Times in 1906 said "...except for the absence of motion, one might fancy oneself at sea."
The Grill Room took the theme and ran with it.  Heavy oak timbers and cast iron bolts are intended to replicate the space below decks in a vintage sailing vessel.  Here, at the turn of the century, the most notable names in New York finance and commerce ate and discussed sailing and business. 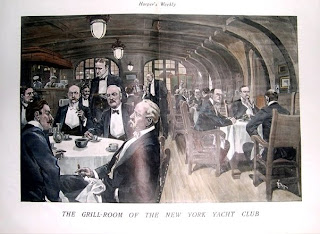 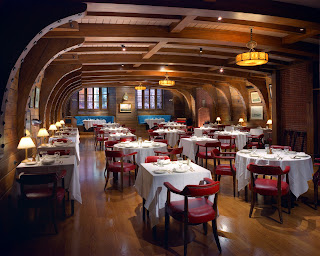 Despite Commodore Morgan's assertion about yachting that "If you have to ask how much it costs, you can't afford it," the building had to be paid for.  Therefore the annual dues were doubled from $25 to $50.
To my mind, the New York Yacht Club is one of the most unusual and visually pleasing buildings in Midtown Manhattan.

Contemporary interior photographs through the generous coutesy of A. Walter Dufresne
Posted by Tom Miller at 6:43 AM