The City of New York established a dispensary for the treatment of the poor in 1791 in the neighborhood of City Hall.  But as the city grew it quickly became apparent that the single infirmary was insufficient.  In 1824 citizens pushed for a provincial branch far to the north in Greenwich Village.  After working from a few temporary locations, the nonprofit Northern Dispensary organization was given the peculiar triangle of land formed where the Y-shaped Waverly Place runs into Grove and Christopher Streets.

In handing over the plot, the City placed a stipulation on the property:  it was to be used solely for the purpose of treating the indigent who could not afford hospital care.

Built by a mason, John Tucker, and a carpenter, Henry Bayard, it was completed in 1831.  The unimposing orange-brick structure was two stories tall, surrounding by the simple cast iron fence with acorn finials and occasional Federal-style palmettes still intact today.  Over the door a marble plaque was inset into the facade which read:  Northern Dispensary.  Instituted 1827.  Built 1831.  Heal The Sick.


Despite its motto, some leaders of the Northern Dispensary had second thoughts when the destitute hoardes began arriving.  In its annual report the board voiced concern over exposing the physicians to "the miserable and degraded of our species, loathsome from disease and...disgusting morals."

Yet heal the sick it did.  In its first annual report the Dispensary documented 3,296 patients.  Among those treated in 1837 was Edgar Allan Poe who complained of a winter cold.  And as the city grew northward, the numbers treated in the Dispensary increased.

By 1855 a third floor was necessary.  The change in brick is noticeable between the second and third floors even today.  Although the unadorned window lintels and sills were copied, a mid-Victorian crenelated cornice was included for interest; however by the turn of the century it had disappeared.  Around that time the work of the Dispensary was at its height, caring for 13,809 patients in 1886.


With the advent of the 20th Century, fewer patients were seen, declining to under 5,000 in 1920.  Just prior to World War II around half of the Dispensary's efforts was in dental work and by the 1960s it had become solely a dental clinic for those who could not afford other dental care.

Problems came in 1986 when, as the AIDS epidemic was sweeping Greenwich Village, the Dispensary refused to provide dental services to AIDS victims.  Reminiscent of the 1828 concern over  "the miserable and degraded of our species, loathsome from disease and...disgusting morals," the doctors disregarded both the Hypocratic Oath and the motto that had been displayed over the door for 150 years:  Heal The Sick. 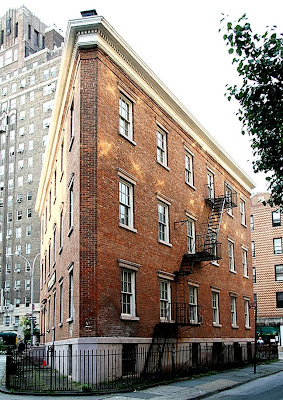 Rather than treat its patients, the Northern Dispensary closed down in 1989 after a battle with New York City's Human Rights Commission.  A year later the Roman Catholic Archdiocese of New York purchased the building with the somewhat ironic hope to open a 15-room haven for homeless people with AIDS.  The plan was thwarted by a group of concerned neighbors and nearby business.

Having sat empty for a decade, the building was sold to William Gottlieb who died a year later.  The beautiful triangular building still sits unoccupied.  Twenty years of dust has accumulated on the dental equipment that was abandoned inside.  The 1820s deed restrictions limiting the use of the property for a medical facility for the poor are still in place, making rehabilitation of the building more difficult and its future unclear.