With 29 sculptures in Central Park today, it is difficult to imagine that only one was included in Frederick Law Olmsted's and Calvert Vaux's 1858 Greensward Plan for Central Park.  They envisioned an open air "hall of reception" that would be the centerpiece of the park.  The Water Terrace, as they called it, would include a dramatic overlook of the lake with two grand stone staircases that descended to a fountain topped by a winged bronze sculpture.

The magnificent terrace was begun in 1859, often considered Vaux's masterpiece.  Richly carved panels by Jacob Wrey Mould depicting birds and floral motifs compliment the natural surroundings.  But the focal point would be the spectacular fountain below.

It was to be a celebration of the 1842 opening of the Croton Aquaduct that brought pure drinking water from Westchester in the north, helping to end years of epidemics such as cholera and yellow fever.  While Vaux designed the base and Mould sculpted the details, including the four 4-foot cherubs representing Temperance, Purity, Health and Peace, the commission for the main sculpture was awarded to Emma Stebbins -- the first woman to receive a major artwork commission from the City. 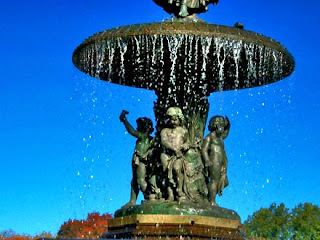 Stebbins' resulting neoclassical angel symbolizes the healing properties of the fresh water of the Croton Reservoir.  She holds a lily, a sign of purity, in one hand while blessing the waters below with the other.  From her studio in Rome, Stebbins began work on the sculpture in  in 1861, just as the Civil War was breaking out in America and slowing construction on the terrace.  Cast in Munich, it was finished six years later.

The fountain was not unveiled until the Park's official opening in 1873.  The brochure that day quoted the Gospel of St. John "Now there is at Jerusalem by the sheep market a pool, which is called  ... Bethesda ...  whoever then first after the troubling of the waters stepped in was made whole of whatsoever disease he had." 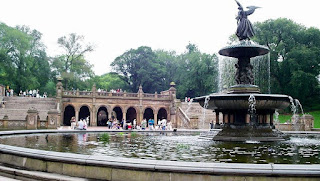 Photo Ahodges7
Thereafter The Water Terrace was known as "Bethesda Terrace," and The Angel of Water became "Bethesda Fountain."

The fountain, along with Trevi in Rome, is one of the most recognized and famous in the world.  It has appeared in scores of movies and in the 1997 Fools Rush In, Alex Whitman played by Matthew Perry refers to the fountain as the place where all of New York passes by.

Like much of Central Park, the Terrace and the fountain slid into disrepair and neglect in the 1970s when vandals attacked the stone carvings and the underpass was used for drug dealings.  The fountain remained dry for nearly 20 years.

Between 1980 and 1981 the Central Park Conservancy initiated a complete restoration -- the stonework was disassembled, cleaned, patched and replaced by sculptors according to the original plans.  The fountain was cleaned, restored and sealed.  It is now washed and waxed by bronze specialists every year.

The Angel of Water once again blesses the flowing waters from the fountain at her feet and Bethesda Terrace looks essentially as it did on dedication day in 1873.
Posted by Tom Miller at 7:04 AM