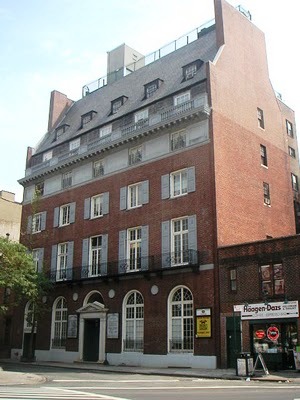 By 1900 the atmosphere of Greenwich Village had changed from one of comfortable residences in bucolic settings to tenements with, in some cases, squalid conditions.  While in other sections of the city Italian, Jewish or Chinese immigrants clustered together, the Village had an unusually heterogeneous mix of races and cultures.

Mary Kingsbury Simkhovitch graduated from Boston University in 1890 and immediately threw herself into social reform.  She arrived in New York City to work in settlement houses, a new concept among the progressive social-minded to improve the living conditions of the poor.  Upon witnessing the  deprived circumstances of Greenwich Village which had the densest population in the city, she decided to start her own center.

Recruiting the help of social reformers like Carl Schurz, Felix Adler and Jacob Riis (whose stark photographs of slum life and tenement interiors startled the nation) she founded Greenwich House.  With the immediate goal of improving the lives of the impoverished Greenwich Village immigrant population, it opened on Thanksgiving Day 1902 in a renovated tenement building at 26 Jones Street.


The House offered free instruction to women on housekeeping, lace making, reading, language, and other areas that would help them improve their own lives.  All the while Simkhovitch worked to reduce the appalling infant mortality rate.  She relentlessly fought for playgrounds, sanitation, child labor laws and overall improved living conditions.  Within the first year the Greenwich House's Social Investigation Committee published The Tenant's Manual, the first guide to tenants' rights and tenement law.

Drawing from the concepts of the City Beautiful movement that endorsed an environment of "civilized" buildings to foster civilized behavior, a permanent structure was planned.  Architects Delano & Aldrich, known for their reserved, sophisticated buildings, designed a red brick neo-Federal structure with white marble trim to be located at 27 Barrow Street.  Opening in 1917 it incorporated interior murals by Arthur Watkins Crisp, early American detailing and cutting-edge amenities for the neighborhood's poor.

On the top level was a running track and gymnasium, the first floor housed an auditorium, there was an art studio and rooms for the 14 social workers on staff.   Noted artists and patrons such as Gertrude Payne Whitney, Eleanor Roosevelt, and Daniel Chester French supported Greenwich House's arts programs; the theory being that the arts were a viable stimulus to cultural enrichment.  Greenwich House Pottery took root here and remains today a respected name in the world of pottery.


As the Greenwich Village neighborhood changes, the Greenwich House remains.  The interior has suffered from nearly a century of use, the Crisp murals have been painted over and exterior could use some tender loving care.  But the old settlement house still continues on its mission of improving the lives of its neighbors.

non-credited photograph taken by the author