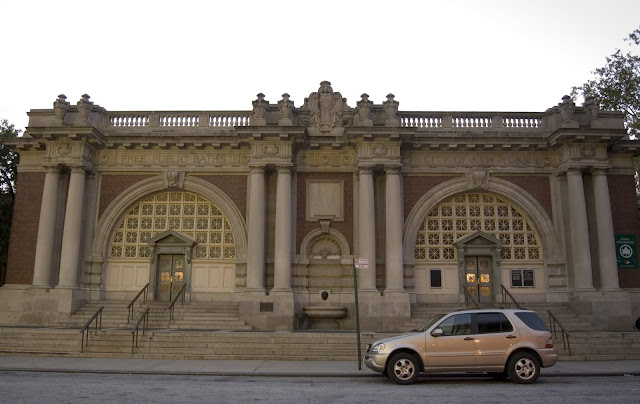 The 19th Century was a time of tremendous growth in New York City.  In the 50 years between 1820 and 1870 the population increased tenfold and communicable diseases were rampant.  Immigrants, crowded into tenement housing with no toilets or bathtubs, were subject to typhoid and cholera.  In the Lower East Side in 1896 there was one bathtub for every 79 families.

Prior to the Civil War, the public began to demand that the City do something.  Middle class and upper class New Yorkers had, by now, taken up the European example of bathing the entire body regularly.  In 1858 Gustav Struve, President of the Committee for Free Public Baths, wrote the editor of The New York Times scolding that Mayor Tiemann had promised six weeks earlier to petition the Common Council to establish free baths for the people.  "Why is nothing done by these gentlemen?  Many thousands of citizens are anxiously waiting for a decision from the Fathers of our City."

Those six weeks turned into thirty years before, in 1889, Dr. Simon Baruch led an impassioned drive for public baths.  Although the City established a few wooden floating baths in the rivers in 1870 -- the number climbing to 15 by 1888 -- there was the problem of sewage in the water and the seasonal limitations.  Obviously they could be used only in summer.

On April 21, 1895 the New York Senate passed a law requiring that all first and second class cities create free public bathing facilities.  Manhattan's first bath did not open until 1901, the process mired in political red tape.

Two years later the Department of Docks and Recreation chose the lot in the Gashouse District at Avenue A and East 23rd Street for a new bathhouse.  Designed by Arnold W. Brunner and William Martin Aiken, it was to mimic the monumental bathhouses of ancient Rome.  The "City Beautiful" movement of the period was motivated by the theory that the public would behave more civilly if surrounded by civilized buildings.

The architects, according to a 1904 New York Times article, were faced with considerations specific to bathhouses -- keeping water steaming hot, venting the steam and maintaining sanitation.  The baths, it said, "...are attractive, both outwardly and inwardly and have the dignity desirable for municipal structures.  The interior finish is intended to make for cleanliness, lightness and airiness." 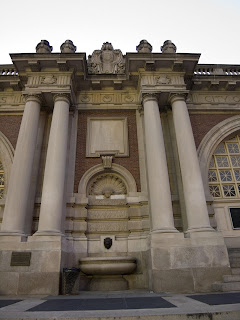 Labeled Neo-Roman or Roman-Revival at the time, the new bathhouse was one of the most lavish in the City when it finally opened on February 17, 1911.  Costing $259,432, it boasted vaulted ceilings, balconies, skylights, stone urns and a fountain decorated with dolphins.  The facility included 79 showers for men and 59 for women, serving approximately 200,000 bathers per year.
In 1936 Parks Commissioner Robert Moses added an outdoor swimming pool and playground.  However by 1973 the aging building was in serious need of repairs and was closed.  While plans for extensive restoration of the interior architectural details were being drawn up, a fire seriously damaged the structure.
Nevertheless, in 1988 the rehabilitated bathhouse was dedicated -- renamed the Asser Levy Recreation Center after the 17th Century Jewish immigrant who stood up to Peter Stuyvesant and obtained civil rights for colonial Jews in New York. 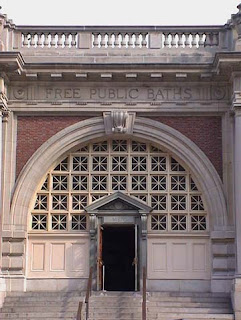 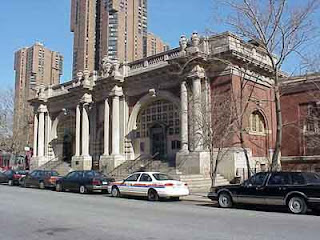 Today the bathhouse offers a gym with weights, workout machines and treadmills; classes in yoga, aerobics, pilates; basketball, handball and indoor and outdoor pools.  But the modernized East 23rd Street Bathhouse retains the monumental quality so sought by the City Beautiful committee.
Posted by Tom Miller at 6:28 AM