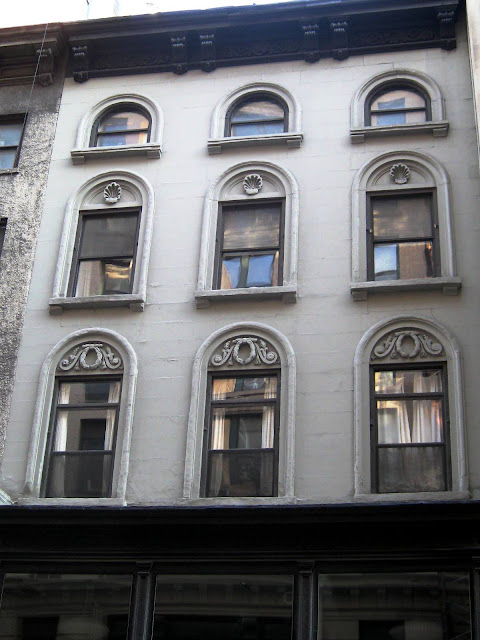 In the decade before the Civil War opulent homes of New York’s wealthiest citizens were spreading northward along Fifth Avenue past 14th Street.    The mansions spilled onto the side streets as the neighborhood competed with the earlier Bond Street and St. John’s Park areas as the city’s most fashionable.


Builder Gustavus A. Conover was involved in the movement and in 1852 he constructed the fine brownstone-clad residence at No. 5 West 20th Street.  Conover, by now, had amassed a considerable fortune of his own and, aside from his construction business, was an officer of the Forty-Second Street and Grand Street Ferry Company.


The four story Italianate-style dwelling sat above a high English basement.   An overhanging cornice was supported by paired, scrolled brackets.  The rows of arched openings grew shorter at each successive story.   And it was the window treatments that made Conover’s house stand out on the block, and compete with its Fifth Avenue neighbors.   Carved shells in full relief adorned the arches of the third floor, outdone by stone wreaths and festoons at the second.    The added architectural touches brought an unusually light, decorative air to what was most often a somber residential style. 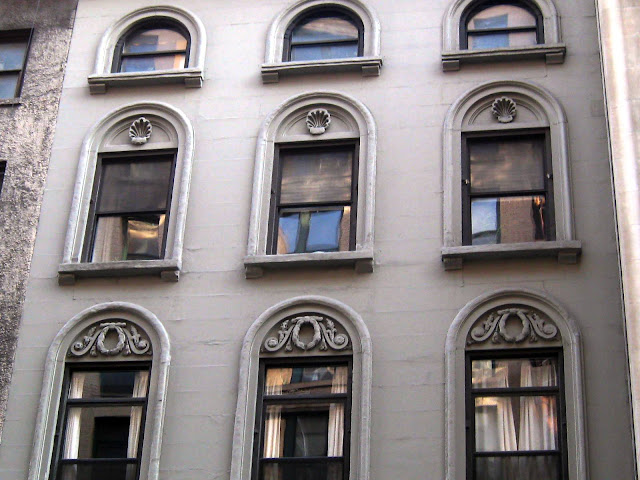 With the clouds of possible war forming in the South, Conover joined a large group of New Yorkers who firmly felt that the slavery question threatened the survival of the unified nation.   Calling themselves “The Union” and headed by George Ward, the group included high-powered men like Schuyler Livingston, Abraham Van Nest, Isaac Townsend and Jacob Westervelt.   The Union termed the anti-slavery movement “agitation” and insisted “The institution of Slavery has existed throughout the history of the world, and in all ages.  In the earliest periods of society, it has been a great instrument of Civilization, by the introduction of Property.”  The men worried that the anti-slavery movement “has grown to a magnitude which now provides ill-feeling, and may terminate in the dissolution of this Union and the destruction of that Republic which has been held forth as a bright example to the nations of the earth.”


Conover owned the house on West 20th Street somewhat briefly; by 1861 he was living at No. 35 West 30th Street.   It then became the home of Benjamin Lincoln Swan, Jr., and his family.


The son of a wealthy merchant, Swan was born on July 7, 1818 to an important colonial family.   Richard Swan arrived in Massachusetts in 1634, becoming an original proprietor of the Narragansett land grant.  Benjamin Swan Junior’s grandfather, Major Samuel Swan, was an eminent Revolutionary War figure and the Battle of Bunker Hill was fought on his farm.


Swan had been educated at Amherst College and Columbia College and in 1840 had entered the ship chandlery business.  By 1850, however, the 32-year old had retired to look “after the estates he had in charge,” according to the New-York Tribune.   Young and wealthy, he was a director in the Manhattan Savings Institution and the Citizens’ Fire Insurance Company.


On June 30, 1855 Swan invested in a partnership with his brothers, Frederick and Caleb, and George A. Bock; forming the dry goods firm of Frederick G. Swan.    Benjamin’s contribution of $30,000 to the endeavor would amount to about $589,000 today.


The Swan family included two children.   After the widowed Benjamin remarried in 1867 the family divided its time between the West 20th Street house and their Oyster Bay, Long Island country estate, The Terrace.   The new Mrs. Swan involved herself in the charities expected of a socially prominent woman while her husband held memberships in exclusive clubs including the Century Club, Union Club, New York Yacht Club, Down Town Club, the St. Nicholas Society and the Sons of the Revolution.


In 1871, like his father, young William Lincoln Swan attended Columbia College.    That same year he founded the Seawanhaka Corinthian Yacht Club, becoming its first Commodore.   For yachting purposes, he used The Terrace as his address.


In the spring of 1892 Benjamin Lincoln Swan, Jr. became ill.  His condition worsened and on April 11 he died of pneumonia in his bed on West 20th Street.    Mrs. Benjamin Swan continued to live in the house as the neighborhood around her rapidly changed.  By 1899, when son William died, the grand mansions of Fifth Avenue had been razed or converted to commercial uses.   William’s wife, the former Isabel Thurston, moved permanently into the Oyster Bay house.


In 1904 the Swan residence at No. 5 West 20th Street was purchased by H. Olin and C. W. Hand.  The men were members of the Presbyterian Boards of Home and Foreign Missions, whose impressive headquarters were located around the corner at Nos. 154-158 Fifth Avenue.  The new owners commissioned architects Pickering & Walker to convert the once-stately mansion to commercial use.


The architects removed the brownstone stoop and replaced the basement and parlor floors with a two-story wood-and-cast iron store front that projected to the property line.    The upper floors were gutted for loft space.

The Federal Merchandise Corporation was in the building as the United States entered the World War in 1917.   Henry Nierman had founded the wholesale merchandising establishment in April of that year.  He brought his 19 year old nephew, William Jacobson, into the business.  Young Jacobson was, apparently, more a patriot than a businessman.


In September of that year the boy was sent out to buy cheesecloth for the firm.  He never returned.  It was not until several days later that the company received word that he had enlisted in the Army.   Nine months later the War Department sent word that young Jacobson had been severely wounded in France.


In June 1918, the firm was under Federal investigation for cheating consumers.    The Federal Merchandise Corporation invited customers to make weekly deposits of $1.00.   When they had deposited $30, a certificate was promised that would entitle them to a 5 to 10 percent discount on merchandise, along with interest on the deposits.


The District Attorney’s office received numerous complaints from persons nationwide who had deposited their $30, but never received the certificate.  In addition, consumers who had ordered items never received them.   The public was even more outraged when The New York Sun reported that several of the swindled customers were “soldiers in camp.”


Within a year the Federal Merchandise Corporation was gone and in its place was the Great Northern Furniture Company.  Like its predecessor, the firm soon found itself in hot water.


The trouble started when Mrs. Helen Becker purchased $18.10 worth of furniture for her home at No. 307 East 97th Street.  Steadfastly adhering to the agreement with the dealer, she paid 10 cents a week until she had paid off the amount due.   When she ordered her delivery, no furniture arrived.   Finally losing patience she filed a complaint and the sales manager, Louis Lax, was arrested for grand larceny under the commercial fraud statute.


Mrs. Becker had opened the floodgates and no fewer than twenty other women called the office of Assistant District Attorney H. C. Kastenbaum with similar complaints.


Throughout the 20th century Benjamin Swan’s former home served a wide variety of businesses.  But through it all the structure changed little from its 1904 appearance.  The two-story storefront remained with only minor modernization, and the upper three stories survive as they were when the Swans lived here.


In 1993 floors 2 through 4 were renovated into residential lofts; but in 2011 the building was reconverted to offices by architects Feingold & Gregory.   Since 2004 the structure has been home to Blue State Digital, a technologically-based organization that develops online fundraising, social networking and other endeavors for brands, individuals, and corporations.


Benjamin Lincoln Swan’s brownstone dwelling has, for some reason, been painted a gray-blue; yet by looking up at the upper floors the passerby can get a sense of the high-end neighborhood just off Fifth Avenue before the outbreak of the Civil War.