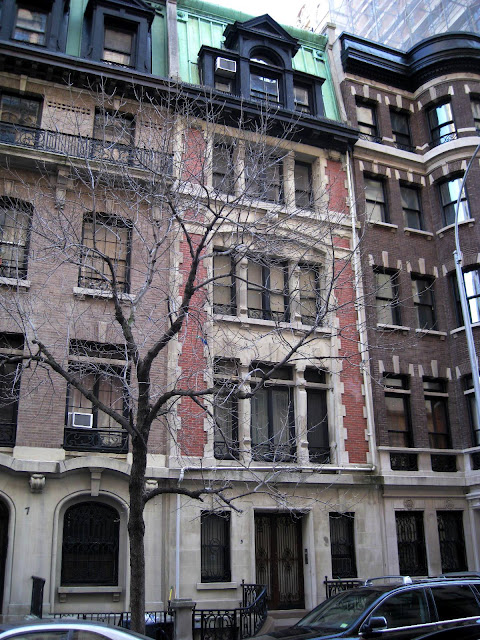 By the turn of the last century sections of the Upper West Side vied with the fashionable neighborhoods on the other side of Central Park.   Hulking mansions lined the avenues and high-end apartment buildings were marketed to wealthy residents.  In 1902 real estate speculating brothers Thomas M. and William W. Hall had already been busy in the area, erecting rows of upper and upper-middle class homes.

Now they called on the architectural firm of Welch, Smith & Provot to design a string of five brick residences stretching west from No. 3 to 11 West 73rd Street.   Completed a year later the upscale brick and limestone homes could easily hold their own with their across-the-park counterparts.   Among them was No. 5, just steps from Central Park; a five-story slice of France in Manhattan.

The Beaux Arts-inspired house stood out from the others in the row with its bold red brick and contrasting white stone.  Above the limestone base, a central two-story bay grabbed attention.  Limestone quoins framed the brickwork, rising upward to the copper-sheathed mansard roof with its striking Palladian-inspired dormer.

The Hall brothers quickly sold No. 5 to Louis Strasburger who was defecting from his east side residence at No. 128 East 61st Street for the West Side.    Now retired, the wealthy jeweler had founded the watch and diamond importing firm of Louis Strasburger & Co. in 1869 with his brother-in-law, Charles Adler.  In 1873 when the pair bought out their competitor Chas. Rubens & Co. they became the largest importing watch firm in New York. 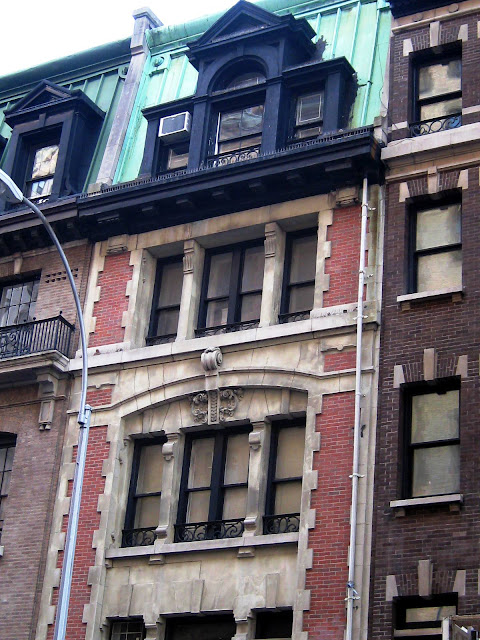 Strasburger’s wealth had become such that in 1880 his family were the victims of a series of extortion plots.    Beginning with a letter demanding that Mrs. Strasburger leave an envelope with $60,000 at Broadway and Barclay Street “if you don’t wish to have a funeral in the house,” the threats became even more serious when daughter Rosalie was nearly abducted from school at Dr. Heubsch’s synagogue on Lexington Avenue.

The ongoing threats from German Nihilists, the intervention of detectives, and the near nervous-breakdown of Mrs. Strasburger ended on April 7, 1881 on 61st Street between Fifth and Madison Avenues with detective and terrorist gunfire and, ultimately, dead Nihilists.

The Strausburgers now, no doubt, planned on a more sedate life on the opposite side of the Park.  Son Byron had taken over the family business, renaming it Byron L. Strausburger & Co. and little Rosa had grown up and married Solomon M. Bloch, a lace importer who conducted his business at Nos. 520-524 Broadway.

By now, however, Bloch’s 30-year old business, S. E. Bloch & Bro. was in trouble.     In September 1903 the debts of the firm had accumulated to $350,000, resulting in its being placed in receivership.  Rosa and Samuel moved into the house on West 73rd Street with her parents.  Undeterred, Bloch founded the Nottingham Lace Works and started over.  It grew into a successful operation, with offices in New York and a factory in Nottingham, England.

After her parents’ deaths, Rosa inherited the house and the Blochs lived on here with their son, Monroe Percy.  As the country entered the world war, Monroe joined the Communication Service in 1918.

In 1923 Bryan Strausburger fell ill.  Rosa brought her brother to the house on West 73rd Street to care for him.  But the wealthy diamond merchant, now 57 years old, died on May 13 in the house his father had purchased just two decades earlier.

After Monroe, now a lawyer, married Muriel Bamberger in 1925 Rosa and Solomon Bloch were left alone in the large home.   Following Rosalie’s death, the large house was perhaps too ungainly for Solomon, who moved into the Hotel Warick, ending the family’s tenure in the handsome residence.

In 1885, while Louis Strasburger was still in the diamond and watch business downtown, The American Society for Psychical Research was founded.  The mission of the organization was to explore “extraordinary” or “unexplained” phenomena; what today are commonly called psychic or paranormal experiences.

In 1969 the Society altered the Strasburger house to accommodate “research, offices and reading rooms.”    From its headquarters here, the group seeks to advance understanding of “the far reaching scientific and spiritual questions raised by the mysteries of consciousness.”

The striking exterior of No. 5 West 73rd Street has been tenderly preserved (other than a rather obtrusive drain pipe that snakes down the façade).   There is no sign or placard to refute that this is not still the home of a successful diamond merchant.

photographs taken by the author
Posted by Tom Miller at 5:45 AM