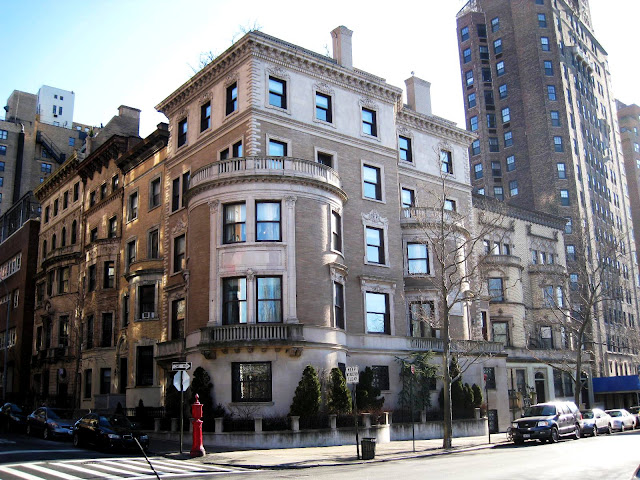 As the 19th century drew to a close work progressed on Riverside Park above the cliffs of the Hudson River.  Based on plans laid out by Fredrick Law Olmstead, the park offered breathtaking views of the river and the palisades on the opposite side.  Developers quickly recognized Riverside Drive as a viable rival to fashionable Fifth Avenue and mansions—both freestanding and rowhouses—began lining the thoroughfare.


In the 1880s and 1890s architect Charles P. H. Gilbert, most often referred to as C. P. H. Gilbert, had been busy in Brooklyn designing upper-class homes along Montgomery Place and Garfield Place among others.   But in 1895 he turned his attention to Riverside Drive.


Almost simultaneously he would design nine houses in close proximity—three at 72nd Street (No. 311 West 72nd and Nos. 1 and 3 Riverside Drive), and a group of six: three that stretched from 74th to 75th Streets, and three more that extended along 75th.  The latter group, begun in 1895, included the corner house at No. 322 West 75th Street (which also, no doubt to the dismay of postal carriers, claimed the address of No. 25 Riverside Drive).


Built for Henry Hobart Vail, editor-in-chief and chairman of the board of the American Book Company, the house was completed two years later in 1897.  Gilbert used the commanding corner site to make the Renaissance Revival Vail house the most impressive of the harmonious group.   Five stories tall, it sat on a limestone base above which three stories of beige Roman brick rose, capped by another in limestone.  A three-story rounded pavilion at the corner commanded attention. 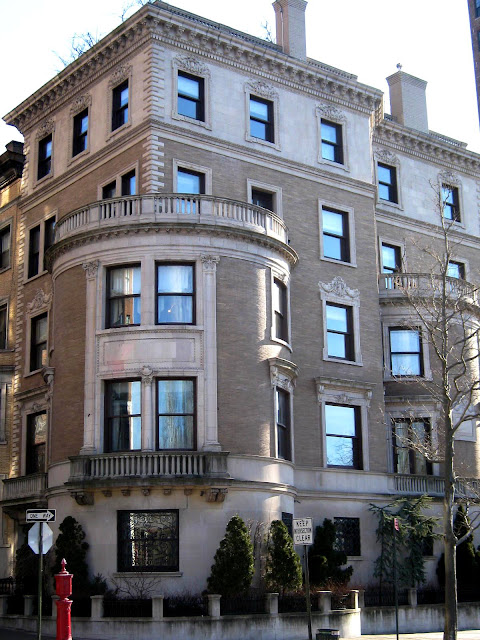 An important symbol of status and financial standing of the millionaires of the gilded age was the inclusion of a pipe organ in their grand homes.  Henry Vail would not be left out and for his instrument he sought the talents of one of the foremost organ builders, George F. Hutchings.  While building Vail’s instrument, the Boston-based Hutchings was also at work on the organ for The Basilica and Shrine of Our Lady of Perpetual Help in Boston that would bring him national acclaim, and one for the church of First Parish in Lexington (Massachusetts).


Despite its sumptuous views, impressive architecture and grand pipe organ, Henry H. Vail did not stay long in the house.  By 1900 the Biographical Directory of the State of New York listed his residence as No. 322 West 75th Street.  But he would not sell the house until April of 1907.


The house became home to engineer Charles Sooysmith and his wife Virginia.  The son of General William Sooysmith who served under General Ulysses S. Grant in the Civil War, his name was “linked with a score of important engineering achievements throughout the United States,” according to the New-York Tribune.    At one point Charles Sooysmith was one of the foremost railroad engineers in the West—constructing railroad bridges in Iowa, Maryland, Kentucky and Nebraska.  He was the first American engineer to successfully use the pneumatic caisson; a construction method that made skyscrapers feasible. 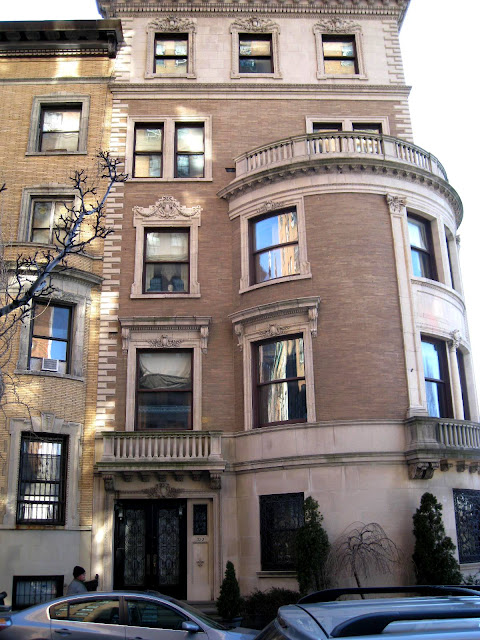 On the evening of June 1, 1916 the 60-year old engineer died in the house on Riverside Drive.  Within the year banker Robert R. Moore and his family moved in.   Moore was president and director of both the Commercial Trust Company and the Commercial Safe Deposit Company.  Previously he held the position of president of the New Amsterdam National Bank.  The mansion quickly became the scene of joy when, on the afternoon of March 7, 1917, daughter Anna was married to Howard C. Davis here.


Like the former residents, however, the Moore family would not stay in the house for an extended period.  On March 2, 1921 the New-York Tribune reported on the sale of the mansion, noting “The house was built to order form plans by C. P. H. Gilbert.”


Mrs. Henry Stanford Brooks, the daughter of Henry Hobart Vail, purchased the magnificent pipe organ for $25,000 in 1928 and donated it in memory of her father to Bryn Mawr College where it was installed in the music wing of the new Goodhart Hall.  Updated by Thomas Cole, including a new electric action, new console, two manuals, twenty-four speaking stops and eight couplers, it was dedicated on February 21 of that year.


In December 1938 the house was sold again, this time to Jessie Denton who leased it three months later.


In the early 1980s Henry Hobart Vail’s luxurious corner home was converted to a residence community for the mentally ill.  The home was operated by The Richmond Fellowship of America, whose goal was to assist emotionally or mentally disturbed adolescents and adults who no longer required inpatient hospital care.  The house provided shelter for 23 long-term clients. 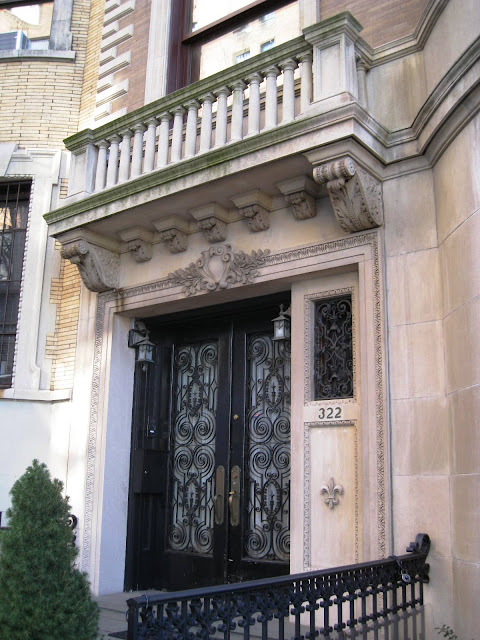 The mansion was converted once again in 2007—this time to luxurious apartments, one per floor.  In 2013 owner Dina Wein Reis was sentenced to 19 months in prison for convincing Fortune 500 companies to give her tens of millions of dollars in merchandise.  Since we would not be using the mansion, she put it on the market as a furnished rental at $75,000 per month.

With only minimal alterations, the Henry Hobart Vail house looks much as it did when C. P. H. Gilbert, himself, lived just steps away at No. 33 Riverside Drive.

photographs taken by the author
many thanks to  Mary Lehman for requesting this post
Posted by Tom Miller at 2:46 AM