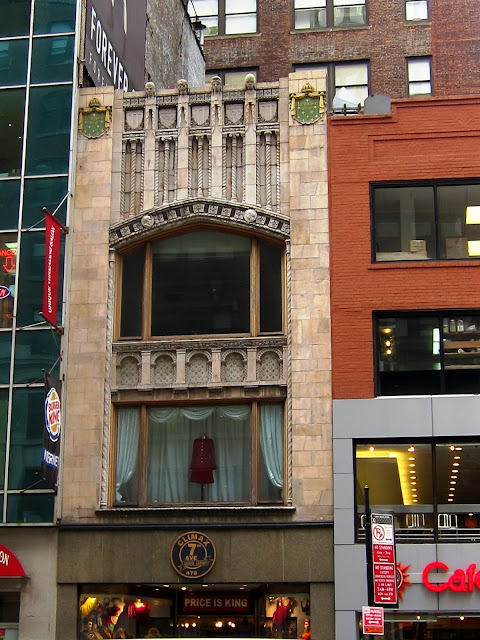 In 1893 Seventh Avenue above 34th Street was a mixture of brick- or brownstone-clad rowhouses and small businesses.   The millinery and apparel district was still centered on Broadway below Houston Street, but the upward progression of the commercial district was already making its effects felt.  In February of that year two four-story brick houses, at Nos. 471 and 478, were sold for a combined price of $23,400.  It was the end of the line as a residence for No. 478.

The house was converted for business use and small offices moved in.  One of these belonged to Harry Kalisky, a bondsman.   Kalisky made his living by providing bail to criminals, most of them charged with petty offenses like pickpocketing or drinking on Sunday.   For a five-dollar bill, the offenders could avoid sitting in the Tombs awaiting their appearance before a judge.

Among law enforcement and polite society, bondsmen suffered an unhappy reputation.  “These bondsmen are all rascals and sharps and should not be countenanced,” said Magaistrate Cornell of the West Side Police Court on April 18, 1899.  He was speaking specifically of Harry Kalisky.

Kalisky had provided the bond for 23-year old Mary Williams who had been arrested by Policeman Thorpe for “loitering in the streets.”    The young streetwalker had never met her bondsman before.  Although, according to The New York Times, “The woman promised to behave and was discharged,” the magistrate had had his fill of bondsman.

“It would be much better to parole these women and take chances in their coming here than to have this system of hired bondsman,” complained the judge.

The system endured, however, and Harry Kalisky remained at No. 478 Seventh Avenue for years.  In 1906 he drew the attention of another magistrate when he provided bond for Martha Francis, the principal witness in the Berthe Claiche murder case and the accused madam of a disorderly house at No. 150 West 32nd Street.   A “disorderly house” was the polite term for a place of prostitution.

When Policeman Benjamin Mallam arrived at the Francis house and arrested her, she offered him $35 “to square things.”   Now charged with running a disorderly house and bribing an officer, her lawyer proclaimed that the “industrious, decent woman” merely ran a “school of applied arts” to teach women released from court “how to support themselves honestly.”  But, according to The Sun, police “suggested that altogether too many men visited the place to leave it above suspicion.”

Also not above suspicion was Harry Kalisky.  The Sun reported “Magistrate Mayo was suspicious of the whole affair and closely examined Harry Kalisky of 478 Seventh avenue, who bailed the woman out of the station house, before accepting him on a new bond.”

Kalisky was not the only tenant at No. 478 providing bondsman services.  Moses Weltz ran a clothing store on street level and enhanced his income as a bondsman.   On Sunday night, November 3, 1907 Bob Nelson’s saloon at 7th Avenue and 30th Street was raided.   The saloon was openly serving alcohol on the Sabbath.  Two bartenders were arrested and taken to night court and held in $500 bail for appearance the following day.

When their lawyer asked that they be released to his charge, the magistrate replied that “a man who was able to give bail in all kinds of cases at all hours of the night as easily as Bob Nelson did ought to be able to get his bartenders out.”  He insisted on the bail.    The Sun reported that the bail was provided “a little later by Moses Weltz.”

While Kalisky and Weltz were busy bailing prostitutes and bartenders out of jail, the millinery and apparel industries were moving into the area.  Before long, No. 478 Seventh Avenue would be engulfed by New York’s vast Garment District.   But for now the little converted house continued to serve a variety of tenants.

Dr. F. M. Hyman had his office here in the early 1920s.  In October 1923 he was called on to examine the World’s Bantamweight Champion Joe Lynch.   The day before the championship match between the champ and Joe Burman, Lynch suffered an accident.  While “alighting from his automobile at the corner of Seventy-sixth Street and Broadway, [he] tripped over his pet collie dog,” said The Times.   A doctor on West End Avenue diagnosed him with a dislocated shoulder and badly lacerated ligaments.

The State Athletic Commission insisted that Lynch be examined by two other physicians—Madison Square Garden’s official doctor, William H. Walker, and Dr. Hyman.   The suspicions and accusations of foul play were rampant and Burman’s manager was “much perturbed” and said he would lay claim to Lynch’s title before the Boxing Commission.

To make things sketchier, neither doctor would confirm the injury.

No. 478 was remodeled in 1925 to include a restaurant on the second floor.  The street level store and offices on the third and fourth floor remained.  Although uptown the exclusive Embassy Club was the venue of debutante cotillions and political dinners, the second floor space in the little building on 7th Avenue boldly took the same name.

Borrowing the name of a fashionable resort was not the only bold action of the restaurant owners.   On December 21, 1926 the Embassy Club was raided by Federal prohibition agents “in an eleventh hour effort to stem the admittedly high tide of holiday liquor,” reported The Times.

Even despite Prohibition, the days of the Embassy Club on 7th Avenue were numbered.  In 1918 Samuel A. Lerner and Harold M. Lane had founded Lerner Shops.   The firm offered moderately-priced women’s dresses and accessories, including what are now termed “plus sizes.”  By now the company was looking to make its entrance into the Garment District.

In 1927 Chain Store Age reported that “Lerner Stores Corporation, women’s wear, will occupy [a] new store building to be erected at 478 Seventh Avenue New York.”   It would appear from Department of Buildings records that Lerner Stores did not erect a new building, but as had been done 34 years earlier, renovated it.
The transformation was eyecatching, to be sure.  Faced in stone and terra cotta, the structure now touted medieval motifs and heraldic symbols.   Two handsome, if contrived, coats of arms surmounted with crowns announced Lerner Stores.  Rope-twist colunettes, shields, blind arches and a quartet of somewhat eerie heads along the parapet combined to make the little building totally unique among its neighbors.

Lerner Stores would stay in their new home only two years.  In 1930 the building was leased to Samuel Salnick.  Throughout the remainder of the 20th century the Garment District exploded with tall loft buildings until No. 478 and its next door neighbor on the corner, another converted 19th century residence, were overshadowed.

Although the street level has been obliterated with a modern, uninteresting façade, the upper floors of the Lerner building are incredibly intact.  The quirky little building is lost among the flurry of 7th Avenue, but is worth a pause and a look upwards. 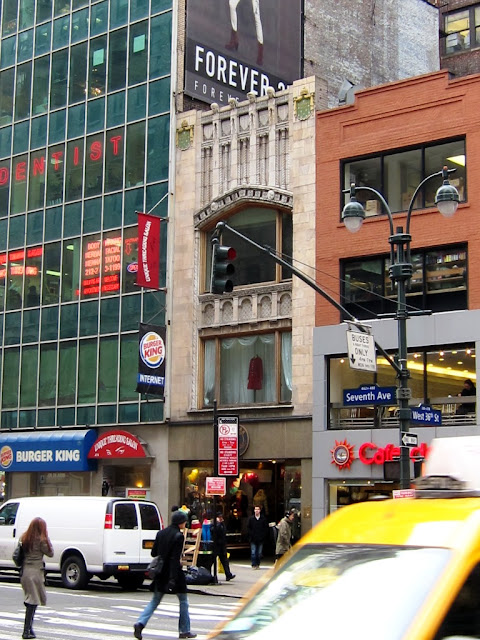 photos taken by the author
Posted by Tom Miller at 3:23 AM