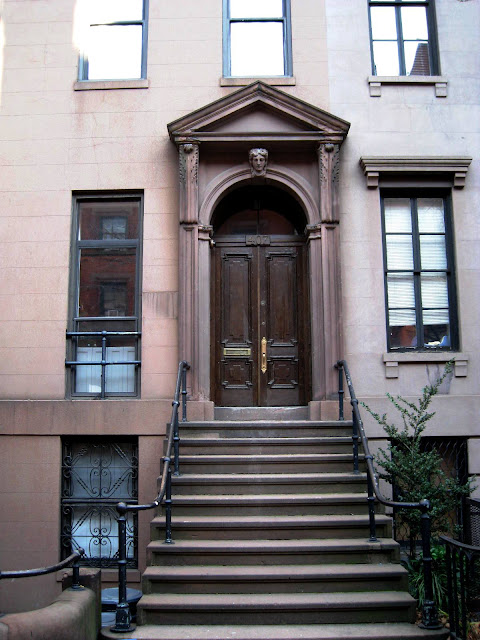 Two years after James Brown Horner was born in Albany on August 5, 1839, development on the former estate of Clement Clarke Moore, “Chelsea,” was going strong far to the south in New York City.   In 1842 a string of brownstone clad residences were erected on the north side of West 21st Street, directly across from the General Theological Seminary.   One of them would stand out.

Built for Joseph Rogers, the Italianate home at No. 407 nearly matched its neighbors with dignified understated bracketed sills, a rusticated English basement below a wide, and brownstone stoop.  The cornice with paired brackets matched that of its near-twin next door at No. 405 built simultaneously.  Quite possibly, at least on the parlor level, pedimented lintels matched the doorway.

But the doorway of No. 407 went a step further.    Unlike the chunky framing of its neighbor, this one was light and elegant.  The classical triangular pediment, unusually tall and acute, was supported by graceful foliate brackets that gently, and barely, curved away from the façade.    The paneled double doors sat one step above the stoop, surmounted by a copious fanlight.  And the piece de resistance was the beautifully-carved keystone in the form of a female face.    It was a portrait, not of a goddess, but of a flesh-and-blood woman.  Her hair and dress were current and, while handsome, she was not a great beauty.   Her presence at the top of the tall stoop set No. 407 apart.

Twenty years later the Civil War would break out and young James Brown Horner enlisted in Hawkin’s Zouaves.    The rather usual volunteer zouave units took their name from particular light infantry regiments of the French Army.  Unlike the regimented Union uniforms, theirs had Persian touches characterized by open-fronted short jackets, oriental sashes and headwear, and baggy trousers.
Horner distinguished himself in major battles including South Mountain, Antietam, Fayetteville, and Fredericksburg.   By the end of the war he had been elevated to the rank of Major for his “gallant conduct at the battle of Averysborough, North Carolina--a title he would carry with him for life.    Horner moved to New York City in 1865 where he took over the essential oil importing business of Joseph Oliver at No. 43 Cedar Street.  Two years later he expanded, merging with two other drug importing firms and becoming Paine Brothers & Horner.  The indefatigable Horner would change his company’s name two more times as he merged or bought out other firms, until 1878 when he settled finally on James B. Horner & Co. 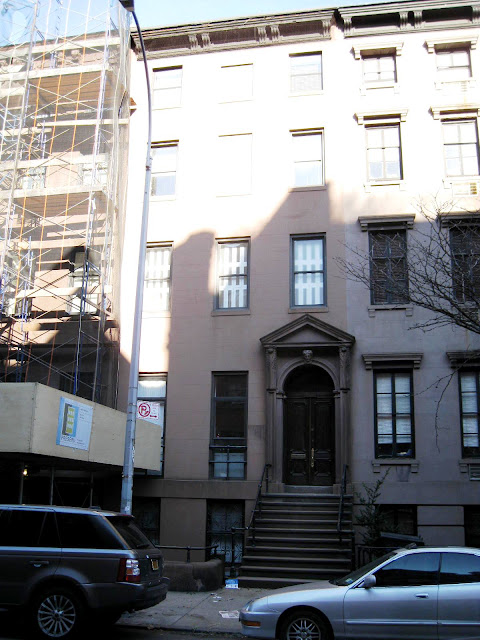 By now the successful businessman had lived at No. 407 West 21st Street for four years.    Ninth Avenue had become the unofficial dividing line between the more respectable Chelsea neighborhood to the east and the more shadowy district towards the river.  Along the avenue undesirable industrial concerns like the Manhattan Gas Works, and turpentine and camphor distilleries on its west side drove upper-middle class homeowners away.  Yet Horner’s shady block with its peaceful setting across from the Seminary remained solidly intact.

The Horner family—there was both a son, Marshall, and daughter, Lillian Elsie—lived a quiet existence in the 21st Street house.  Although financially successful, the Horner name appeared in newspapers only when there was a military dinner, parade, or similar function.    How James B. Horner preferred to spend his private time is reflected in his club affiliations.  He was president of the Hawkin’s Zouaves Association for several years, was a member of the Elks Lodge 1, the E. A. Kimball Post No. 100, the Grand Army of the Republic, and the Military Order of the Loyal Legion.

Horner would be seen leading major New York parades, including the Memorial Day parade in 1884 celebrating Evacuation Day (a former holiday marking the 1783 departure of the British from Manhattan), and the funeral procession of General Ulysses S. Grant.  When, on the evening of May 16, 1897, the “semi-monthly encampment” of the E. A Kimball Post No. 100 was held, the New-York Tribune made special note that “Major James B. Horner added to the general merriment by telling some of his famous Scotch stories.”  That same year Lillian received the honor of unveiling the monument at the Antietam battlefield before 5,000 onlookers.

The importing of essential oils provided a comfortable income; but the imaginative Horner branched out.   In 1881 he began publication of Marshall’s Illustrated Almanac, named for his son.   The booklet was given away by thousands of druggists nationwide.  While it offered the expected facts and charts, the almanac more importantly served as a vehicle to push Horner's other business:  cubeb cigarettes.

Cubebs, the dried, unripe fruit of an East Indian vine, was commonly sold by druggists as a powder to treat bronchial inflammation and disorders of the urinary tract, including gonorrhea.    Horner wrapped the powder in rice paper to form cigarettes that were packaged similarly to regular tobacco cigarettes.   Called Marshall’s Prepared Cubeb Cigarettes, they were touted as a remedy for “catarrh, cold in the head, hay fever, asthma, all throat diseases, foul breath, etc.”

A year after Horner began manufacturing the cigarettes  he got children involved in his marketing.  Each cigarette pack included an advertising card.  In the spring of 1882 he advertised in Harper & Brothers’ Young People “One hundred and fifty advertising cards (no duplicates) for a toy steam-engine.  Write, describing engine.  M. F. Horner, 407 W. 21st St., New York City.”  M. F. Horner was, of course, his son Marshall.

Horner’s wrath was doubtlessly aroused in 1888 when he was the victim of the cad whom The Evening World deemed “a remarkable swindler” and “an oily and persuasive rascal.”  Henry Hennessy was a young man who stood only about five feet, two inches.  What he lacked in stature he made up for in guile.   “He was a muddy mettled rascal, with a smooth face and red hair,” said The Evening World.  “He called at stores where stationers’ supplies were sold, generally; ordered a bill of goods for James B. Horner, who is an importer of essential oils at 44 Cedar street.

“Then the swindler always wanted to deliver a part of the order himself, making excuse that his firm was in immediate and dire need of the goods,” explained the newspaper.

Hennessy worked his scheme at Crouch & Fitzgerald; John Sullivan, dealer in horse goods; J. W. Thorne; Merchants’ Stencil Works; Robert Gair & Co., stationers; and others.    From each of the orders he made off with between $1 and $15 worth of goods.     Then the bills began arriving at James B. Horner’s office.

Hennessy was caught and sent to Blackwell’s Island for stealing $13.50 worth of goods “pretending to be acting for Mr. Horner.”  He did not learn his lesson, however.  Immediately upon his release he started his scheme again—still using Horner in his ploy.   He visited Cattanach, a Broadway trunk dealer and attempted to walk away with two $6 Gladstone bags supposedly for J. B. Horner; then he tried to take a horse collar from Collins, Bailey & Co. at No. 10 Peck Slip to no avail.  He had better luck with Benjamin Moore, a sail maker at No. 27 South Street.  The merchant allowed Hennessy to leave with two truck covers worth $19.  “When he called on J. B. Horner with his bill for the same [he] discovered he had been victimized,” reported The World.

The newspaper said “[Hennessy] was liberated a few weeks ago, and already a half dozen merchants are complaining of losses by a smooth-faced, diminutive blond swindler, and while the amiable Mr. Hutchinson is busy telling delivery boys that James B. Horner is at 44 Cedar street, Mr. Horner is just as busy convincing the delivery boys that he has not ordered the goods which they bring.”

Mrs. Horner died shortly after the turn of the century, and Lillian married George H. Kuper, who had a trucking and forwarding business on Christopher Street, on November 5, 1908.   Major James B. Horner lived on in the house on West 21st Street, running to his several businesses, attending military dinners and meetings, and amassing a sizable fortune.

When Helen McLean Kimball, the widow of Lt. Colonel Edgar A. Kimball of the 9th New York Volunteers, died in Washington DC just after New Years in 1911, Horner stepped in to provide a fitting farewell.  Mrs. Kimball’s body was transported to New York and on January 6 at 2:00 in the afternoon, her funeral was held in the parlor of No. 407 West 21st Street.

It would not be the last funeral in the home.  Two days after Christmas Day in 1914, Major James Brown Horner died in the house at the age of 76.    His funeral took place here at 8:00 p.m. on Wednesday December 30.

The Civil War hero and ambitious businessman left an estate of around $1 million which was split between his two children.    The Evening World would later remark that he was known as “the Cubeb Cigarette King.”

Lillian received the house and although she and her husband lived in Red Bank, New Jersey, they retained it—what The Evening World called their “town house.”   The quiet domesticity of the Kruper household would be shattered a year after Horner’s death.

In July 1915, according to The Evening World, “a break took place in the family.”  The newspaper reported that “Following a quarrel with her husband, Mrs. Kuper left the Red Bank home, taking their children, Helen, aged three, and Horner, five, to New York and living with them at the Park Avenue Hotel.”

George followed, moving in to the 21st Street house, and hired a private detective to “shadow” Lillian.   On August 9 George grabbed the children from the Park Avenue Hotel and spirited them away to his parents’ home in Red Bank.   Then, using evidence collected by his detective, he filed a suit against wealthy undertaker Leon T. Stowe.  The action charged that “Stowe stole the affections of his wife, Helen Horner Kuper.”  The Evening World pointed out that “Stowe was a warm friend of Mrs. Kuper’s father, and was a favored visitor at the Horner home before she was married to Kuper”

During the ugly court battle, Lillian called her husband’s actions “spitework” and his conduct “prejudicial to the moral training and welfare” of their children.

Lillian held on to the 22-foot wide family home for another seventeen years.  Then, in April 1932 she sold the house that her father had purchased nearly six decades previously.   The buyer, whom The New York Times called only an “investing client,” paid cash for the house and immediately announced plans for “alterations and improvements.”

It was a time when Victorian ornament was considered passé and undesirable.  It is almost certainly now that the architectural detailing was shaved off of the façade—the lintels and sills removed to create an industrial uninteresting plane.  Yet the magnificent doorway survived—and one cannot help but think that the lovely face staring down upon the stoop prevented even the most cold-hearted renovator from smashing it off.

In 1957 the Horner house acquired by the Roman Catholic Church of the Guardian Angel, just around the corner, and was converted into a convent for the Sisters of St. Dominic.  Thirty-nine nuns lived here, with accommodations for as many as 15 in the basement level to just four in the more spacious rooms of the fourth floor.

In February 2010 the church sold the house to salsa singer, politician and actor Ruben Blades for around $3.95 million.   The 61-year old celebrity had sold his Los Angeles residence a year earlier for $2.4 million, according to the Los Angeles Times. 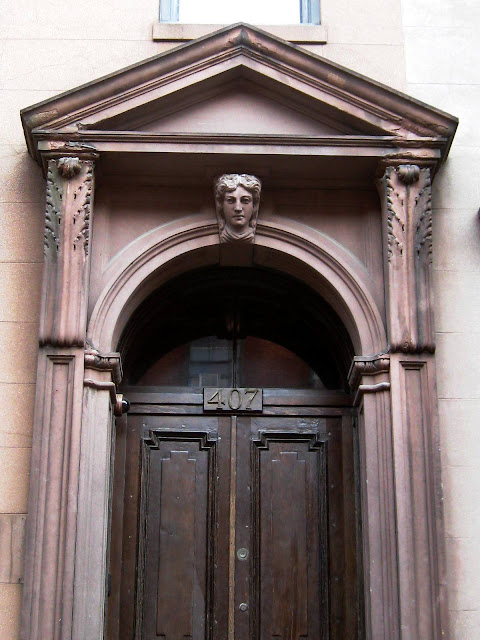 Major James Brown Horner’s dignified brownstone home at No. 407 West 21st Street will, most likely, regain its elevated status as a single-family, upscale home with Blades’ renovations.  In the meantime the hauntingly lovely stone portrait of a woman who sat before a sculptor over 170 years ago remains.

non-historic photographs taken by the author
Posted by Tom Miller at 3:23 AM