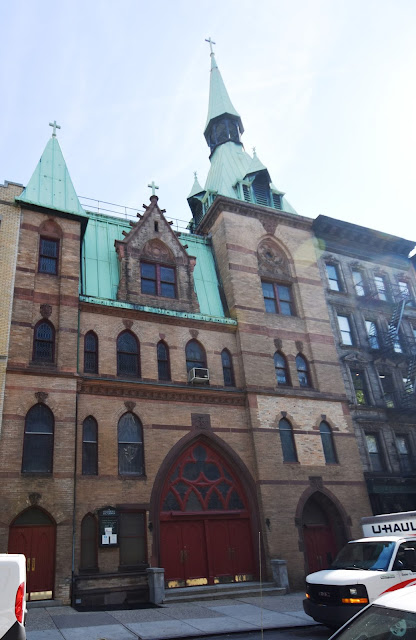 By 1855, New York City had the third largest German population in the world—outranked only by Vienna and Berlin.  The New York Times, forty years later, would explain “The revolution of 1848-1849 in Germany caused many a brave German to leave his beloved Fatherland and seek refuge within the borders of the United States.  These refugees brought with them the habits and customs of the land of their birth, and shortly after their arrival on American soil they banded themselves together in organizations similar to those they so dearly loved in the Old World.”

Although most German immigrants settled on Manhattan’s Lower East Side; some went further north to the Yorkville neighborhood.  There, in 1863, the Reverend C. J. Renz founded the Immanuel German Evangelical Lutheran Church.

Initially the congregation worshiped in the old Yorkville Court House, at 86th Street and Fourth Avenue (later renamed Park Avenue).  Later it built a modest church building at 213-215 East 83rd Street, between Second and Third Avenues.  Problems came to the German-language congregation when the highly-popular Reverend Renz left in 1867.

By 1889, the membership had dwindled to merely 13 congregants and the church was forced to sell its property.  After receiving an impassioned plea from his former church, Renz agreed to return.  Within two years membership had rebounded to several hundred.  By March 1891, according to The New York Times, "the congregation had increased so in size that it was felt that it would would be best to have a new church edifice."

The property on East 83rd Street was repurchased and in June 1892 the old church building was demolished as architect Henry F. Erhardt completed plans for an impressive new structure.  On February 12, 1893, the cornerstone was laid with, according to the New-York Tribune, “impressive ceremonies.”  The street was filled with “interested spectators” and a temporary platform was erected for the event.  Within the cornerstone was placed a copper box containing “a manuscript history of the church, a Bible, copies of denominational and secular papers, a number of coins, including a Columbian half-dollar, and a complete series of the new postage stamps.”

The New York Times predicted the new church “is to be a handsome edifice in the Gothic style.”  The New-York Tribune added, “The building will contain, besides the auditorium, a school room, apartments for the pastor, a study and a reception room.”  The completed church would be capable of accommodating 800 worshipers.

The edifice was completed late in 1894.  Erhardt had produced an imposing neo-Gothic structure of buff brick trimmed in brownstone.  Equally important as the stone and brick was the vast amount of copper which covered the central mansard and spires.

During the construction process, Erhardt had revised the plans. Now with the building completed, the “alterations, deviations, and additions” caused problems. 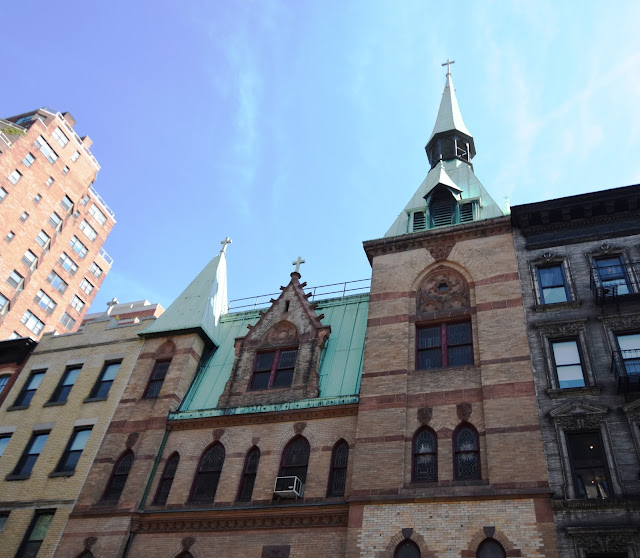 The church expected to receive a bill of $2,000, the contracted construction price (equal to about $58,000 in 2016).  Instead, contractor Jacob A. Zimmerman’s bill was more than double that amount.  He had added $2,041 for the extra work Erhardt had ordered.  His itemized bill laid out the costs of additional labor and materials.  The church not only refused to pay the extra amount, but the entire bill.

Finally, Zimmerman sued the German Evangelical Lutheran Immanuel’s Church.  On January 7, 1895, the Superior Court of New York City ruled in the contractor’s favor.  The church was ordered to pay Zimmerman $4,343.31.  It was possibly these unexpected construction costs that prompted the congregation to take out a $38,000 mortgage on the building three years later.

In the meantime, it was not only German natives were crowding into the Lower East Side.  On April 26, 1891, immigrants from Slovakia celebrated the first service of the Church of St. Elizabeth of Hungary.  The congregation erected its first building at 345 East 4th Street in 1892.

Following the turn of the century, the German, Hungarian, and Polish residents of the Lower East Side began migrating northward to Yorkville.    On June 10, 1917, The New York Times reported on the “sale and resale of [an] old Yorkville landmark.”  Ernest N. Adler purchased the German Evangelical Immanuel Church and resold it the same week to the Church of St. Elizabeth of Hungary.

After a decade in its new home, the Church of St. Elizabeth of Hungary conducted what The New York Times called “extensive alterations.”  At 11:00 on the morning of November 18, 1928 the building was rededicated by Cardinal Patrick Joseph Hayes.  The newspaper pointed out that “The church, which was formerly a Lutheran edifice, has been used by Slovak Catholics for the last ten years.”

More than 500 parishioners—including men, women and children—met the Cardinal at Third Avenue and 81st Street at 10:45 and marched in procession led by a band to the church.  Approximately 2,000 persons attended the rededication, which was preceded by a solemn high mass.
The renovations included exquisite painting of the groined ceiling.  Ethereal stars floated on a background of deep blue, and heavenly, while colorful angels sprouted from painted clouds.

Throughout the coming decades Yorkville slowly lost its identity as a German and Hungarian enclave.  The Church of St. Elizabeth of Hungary eventually conducted services in English; and then on July 1 1980 was designated by Cardinal Terence Cooke as New York’s official church for Deaf Catholics.

For 34 years the masses were conducted in sign language.  On November 28, 2014, Sharon Otterman, writing in The New York Times, pointed out “The deaf travel from across the city and Westchester County to services held on the first and third Sundays of each month, often arriving in the morning and staying until 6 p.m.  During the week, there are social gatherings and a Tuesday club for older deaf people, who spend hours in the church’s simple social hall, playing bingo and catching up.”

Otterman was reporting on the Church of St. Elizabeth of Hungary because 16 days earlier Cardinal Timothy Dolan announced that the church would be closed.  The parish, along with that of St. Stephen of Hungary, was to be merged with St. Monica’s on East 79th Street.  The deaf parishioners were understandably concerned.

The intimate size of St. Elizabeth’s meant that the deaf could easily see Msgr. Patrick McCahill as he celebrated mass in sign language.  St. Monica’s, on the other hand, had what the monsignor called a “cathedral-size sanctuary” making sign-language services difficult.

Pleas from the congregants went unheeded.  Father McCahill questioned “I can’t understand why it can’t stay open and independent.”  He appealed “Please, don’t let these people, who are marginalized in so many ways by society, be marginalized by the church.”

non-credited photographs by the author
no permission to reuse the content of this blog has been granted to LaptrinhX.com
Posted by Tom Miller at 3:26 AM