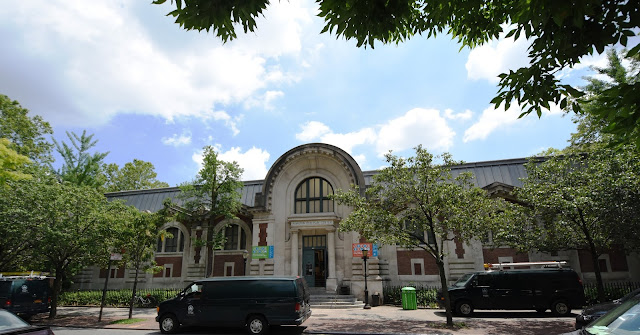 In the last decade of the 19th century New York City focused attention on playgrounds and parks; especially in tenement neighborhoods where immigrant children played in the streets.  In 1897 Columbus Park, the last work of Calvert Vaux, opened in the notorious Mulberry Bend slum.  A year earlier Carrere & Hastings had converted the St. James Burial Ground in Greenwich Village to an Italian-style park.  They would soon be working on the Eleventh Ward Park, quickly known as the Hamilton Fish Park, on the Lower East Side.

The site, bounded by Houston, Pitt, Stanton and Sheriff Streets, sat amidst the tenement district which The Real Estate Record & Builders’ Guide called “one of the most thickly populated parts of the East Side.”

Begun under the administration of Mayor Lafayette Strong, the Hamilton Fish Park project immediately faced problems.  The greatest obstacle was the greed of the property owners.  The Record & Guide reported “Persons whose land is sought by the city demand usually what would be called an exorbitant price.  The opinion in general that the city has plenty of money, and can, therefore, afford to ‘pay, pay, pay.”  In the end the city paid over $3 million for the tenements and old buildings.

The opening of the park was scheduled for Friday, May 25, 1900.  But it was postponed by the seriously-disappointed Park Department President, George C. Clausen.   High on his list of problems was Carrere & Hastings’ Gymnasium and Bath building.

The City Beautiful Movement promised that residents of poorer neighborhoods would be uplifted to civil behavior when surrounded by monumental architecture.   The architects created a miniature version of the Petit Palais in Paris, designed by Charles Girault in 1897 and completed in 1900.  But while their Hamilton Fish Park Gymnasium and Bath was beautiful, indeed; its function had been overlooked in creating a striking edifice.

Clausen was indignant.  “In an effort to combine park features with playground features the designers of this park seem to have secured neither a park nor a playground.”  He pointed to the Carrere & Hastings building with contempt.  “Most of the $183,000 has been put in an extensive building, whose architectural features are not at all consistent with the character of the park or its surroundings…The gymnasium feature is not complete, and is without apparatus.”

The public baths, mandated by New York State, were “ridiculously inadequate.”  In a neighborhood where many indigent residents did not have hot water, the Hamilton Fish Park baths was miserably short-sighted, according to Clausen.   He pointed out there was “room for only three persons to bathe at a time on each side, that for the men and that for the women, yet, with nickel-plated plumbing and costly tilework, enough money has been spent to fit up in a highly sanitary and useful manner much more bathing room.”

As the rescheduled opening day neared, the New-York Tribune was more diplomatic in its description.  The newspaper admitted on May 27, 1900 that “Work was begun on the park in April, 1899, and, although the appropriation has been exhausted, the park is not completed.  The grounds have been laid out in attractive lawns and playgrounds, but no funds were left to erect the gymnastic apparatus, which was to be a feature of the park.”

Nevertheless, the Tribune gave its overall approval to the architects.  “On the Pitt-st. front, extending 160 feet, is the handsome park building, with baths, gymnasiums and running tracks on either side of the main entrance.  The north side is for women, and the south side for men.  The grounds and the buildings were designed by Carrere & Hastings, who succeeded in creating a park in which the old rules governing such places have been avoided.”

The “old rules” were the “keep off the grass” signs that were normally found in public parks.  The Record & Guide pointed out “It has been the custom to devote altogether too much space to the purely ornamental features of our small parks, whose primary purpose should be to furnish recreation and exercise for the youth of their several vicinages.  There are in the older of these parks too many flowers that the children may not pluck and too much grass to keep off of.”  The journal reported that Carrere & Hastings “have done the best thing possible for the swarms of children, who are even now hanging around the ugly board enclosure eagerly awaiting the moment when they can revel within the precincts.”

The New-York Tribune was forced to admit, however, that “It has also been said, in criticism of the park, that the bath facilities are inadequate.”

The park was opened at 8:00 on the evening of June 1, 1900.  Park officials chose a nighttime event to make evident use of the floodlights which The New York Times said “lit up the green inclosure like bright sunshine.”

In reporting on the opening and the 10,000 children who swarmed into the park, The Times floridly contrasted it to its bleak surroundings.  “Hamilton Fish Park, the three and a half acres of playground…hewn out of the darkened mass of brick and mortar in the very heart of the east side, was thrown open to the public.”

“There were children of every age, size, nationality, and lung power down to the smallest mite of humanity in a brothers’ or sister’s arms, who stared in breathless amazement at the lights and flags, and who shrank in terror when the band with a crash struck up ‘The Star-Spangled Banner.’”

Those street-wise children were unaccustomed to grand civic events and officials struggled to get through the ceremony.  Boys sneaked below the grandstand where judges, senators and assemblymen were seated.  “These gentlemen were compelled to stand well back from the edge of the platform to avoid having their trousers legs pulled and their toes struck by mischievous boys below,” wrote The Times.

The bass horn player was forced twice to empty his instrument of paper balls and other articles.  And while Secretary Holly addressed the group, he kept “right on with his speech, while enthusiastic urchins stuck pins in his legs and pulled his trousers cordially.” 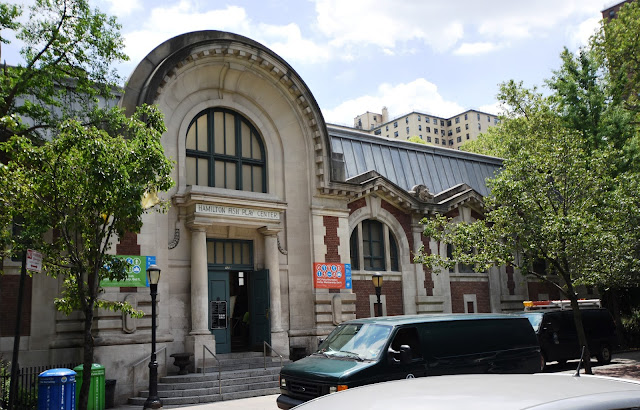 Not only had the appropriation been exhausted in constructing the park; but city officials neglected to provide for maintenance.  A year later, on October 16, 1901 Charles B. Stover of the Outdoor and Recreation League applied to the Board of Estimate for additional funds to maintain the gymnasium and bath building.  “He said that the buildings cost $80,000 and that there has been no money appropriated for maintenance,” reported The New York Times.

Mayor Robert Anderson Van Wyck was little moved.  “That is what destroyed Rome—furnishing amusements for the populace.  Now, if we have got to have vaudeville shows for the people of New York it will not be long before New York will be destroyed.”

As beautiful as the Carrere & Hastings Beaux Arts structure was, there was no arguing that it was nearly useless for its intended functions.  In 1903 the entire park was redesigned.  On October 3 that year it reopened with gymnastics and games to celebrate.  The New-York Tribune reported that the park “has been re-sodded, trees have been planted, new asphalt paths have been laid and its entire eastern half has been regarded and resurfaced.”

The too-small gymnasium and bath building was less fortunate--it was closed.  Exactly one year later the city considered a renovation to make the building useful.  On October 17, 1904 The Times reported that the Committee on Buildings had been instructed to inspect “the gymnasium building in Hamilton Fish Park to determine [its] availability for school purposes.”

The school proposal never came to pass and in September the following year the gymnasium building was briefly opened as the scene of a unique inauguration.  Some creative-thinking parks official realized that maintaining the park would be easier if the neighborhood youth were involved.   A political campaign was kicked off whereby boys ran for office in Playground City.  It ended in an election on August 15.

On the afternoon of September 1 600 “boy citizens’ crushed into the gymnasium building to see 16-year old Nathan Kase sworn in as Mayor.  B. F. Kelley, Supervisor of Playgrounds administered the oath “Do you solemnly swear to administer the laws of Playground City to the best of your abilities?”

After sitting vacant for years, the gymnasium and bath building was reopened on March 4, 1911 for the city’s first ever municipal-sponsored dance.  John Merven Carrere had died just three days earlier and before the event started Parks Commissioner Stover remembered the architect. 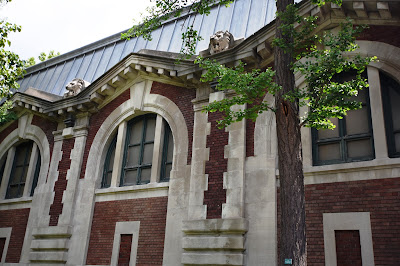 “Thousands passed through the Public Library as he lay in state and saw the building which will doubtless be his noblest monument.  But we have our monument to him here.  Carrere & Hastings designed this gymnasium, and it is a pity that it has been unused for seven years.  Now we intend to put these two gymnasiums—one for the women and one for the men—to their full use, and with their running tracks in the galleries all ready for practice and the installation of a little apparatus they will be of real service to all who live in this neighborhood.”

Before the dance there were athletic exhibitions in the refurbished space—wrestling and boxing matches and a display of gymnastics.  The New York Times reported on the affair the next morning.  “So to the music of a piano, a violin, a cornet, and a drum the couples indulged in the waltz and two-step with as much zest as the rather limited floor space permitted.  The men seemed to outnumber the girls, but the seemed to have a thoroughly social time.”

The gymnasium building was once against an oasis in the tenement neighborhood.  On February 17, 1912 the Record & Guide noted the need for recreational buildings.  “The strongest evidence of the usefulness of such quarters may now be seen in Hamilton Fish Park, where on winter evenings room cannot be found to accommodate not only the large number of individuals, but the considerable number of independent social and athletic organizations in that neighborhood.” 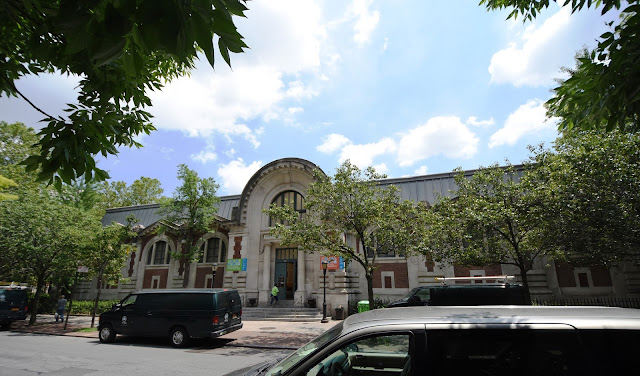 Carrere & Hastings handsome, if initially short-sighted, park palace continued to serve the low-income community throughout the 20th century.  In 1990 the sole remnant of the architects’ 1898 park design was converted to a neighborhood community center, including classrooms and meeting rooms.   The building was included in the $14 million restoration of the park by John Ciardullo Associates in 1992.