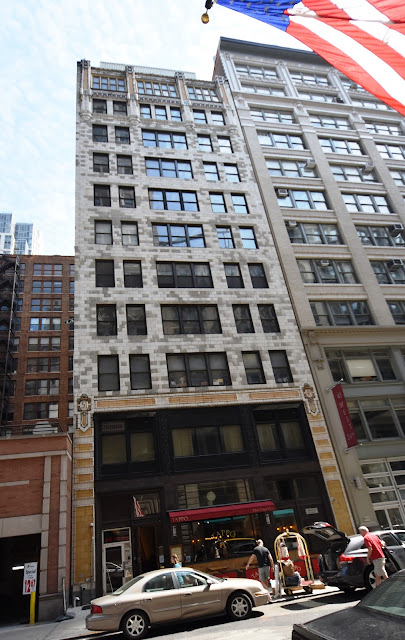 At the turn of the last century the crime-ridden neighborhood known as the Tenderloin, roughly between 23rd and 42nd streets from Fifth to Seventh Avenues, was being cleaned up by reformers like Anthony Comstock and Police Commissioner Theodore Roosevelt.  One by one saloons, gambling dens and brothels were replaced by loft buildings as the area earned the new moniker, the Mercantile District.

On March 7, 1908 developer Edmund Coffin purchased the “four story business building” at No. 51 West 24th Street.  In reporting the sale, The New York Times mentioned “Mr. Coffin owns the adjoining property, No. 49, and now controls a plot 45 by 98.9.”

Coffin had plans for the site and wasted no time in implementing them.   One month later, on April 11, The Record & Guide reported that architects Stout & Hill had completed the plans an the 11-story loft building of terra cotta and brick.  The report listed all the latest technology—steam heat, electric elevators and “skeleton construction.”  It mentioned that “two buildings will be demolished.”

Well-known contractors Thompson-Starrett Co. was awarded to contract to construct the building.  Founded in 1899, the firm was a pioneer in skyscraper construction and within the next two decades would build the Woolworth Building, the American Stock Exchange, the Equitable Building, and Chicago’s Sears, Roebuck and Company Complex, as well as other important structures.

While construction was underway, Coffin leased the building to real estate manager Lee Holstein “for a long term of years” in August 1908.  Holstein realized the potential in the area and the modern factory.  In November, as construction continued, he leased 20,000 square feet in the building to the United Manufacturing Trimming Company, Louis Barnett & Son, and Jacob Isaacson.  The future tenants were all engaged in apparel-related businesses.

Stout & Hill’s factory and store building was completed in 1909.  A two-story cast iron base of geometric designs, thin rope twist colunettes and leaded transoms, was framed in colorful terra cotta.  Most striking were the two Vienna Succession-inspired plaques on either side which announced the two addresses. 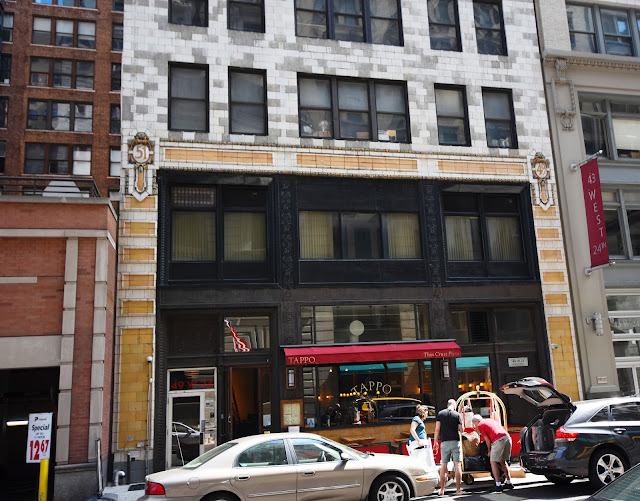 The architects created interest in the severely unadorned seven-story midsection by the use of starkly variegated stone.  Terra cotta joined brick at the top level to reintroduce the colorful decoration.  Here the façade leaned slightly back from the piers, catching the northern light much like an artist’s studio. 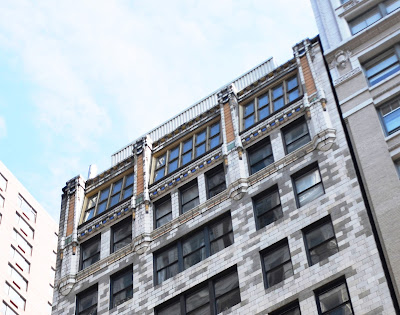 Among the building’s first tenants was Thalheimer Brothers., a button manufacturer.  Harry Jonas ran the firm, and his was a Horatio Algier-worthy success story.  Jonas had been hired around 1890 as an errand boy.  Over the next two decades he slowly worked his way up until, in 1909 he was made head of the firm.

On the afternoon of Saturday, June 10, 1911 Harry Jonas left his office and boarded the Sixth Avenue street car heading uptown.  Before going home to East Orange, New Jersey to his ailing wife, he intended to stop by the Turkish bath at Sixth Avenue and 42nd Street first.  He took a seat on the street car and began reading his newspaper.

Sitting next to Jonas was a “fashionably dressed woman about 35 years old,” as described by The New York Times later.  Next to her was Thomas E. D. Ritchie, a traveling salesman for the Fred Lee Company.  The streetcar had gone about 10 blocks when suddenly Ritchie jumped to his feet, searched his pockets frantically and exclaimed that his money was missing.

The salesman told Jonas he had lost a $20 gold piece and a $10 gold piece.  The woman and Jonas both stood up so the seats and floor could be searched; but the coins were not there.

At 42nd Street Jonas got off the car.  Suddenly a policeman grabbed his shoulder.  Ritchie had jumped off the car before Jonas and told the first officer he found that Jonas had picked his pocket.  “I charge this man with taking my money!” he said.

Shocked, Harry Jonas consented to be searched.  The Sun reported “He had $300 in bills and silver in his pockets, but no gold.”  (The cash Jonas was carrying was evidence of the affluence he had achieved.  It would be equal to more than $7,700 in 2016.)

The two men were taken to the East 51st Street station house, where Captain Raynor explained to Ritchie that he was “taking a risk in making a complaint.”  The salesman persisted and pressed charges of grand larceny against Jonas, despite there being no evidence at all.

Harry Jonas’s stature in the business community resulted in the story being followed for two days by various newspapers.  He was held in jail for nine hours, all the while insisting, according to The Times that “the complainant was making a grave mistake.”

When his case was brought before the magistrate in the Yorkville police court on June 11, the courtroom was filled with friends and businessmen who came to “testify to his good character,” according to The Sun.

Jonas told the judge “I have never had any imputation made against my honesty since I have been in business…The accusation of picking pockets almost knocked me flat.”  As he finished his testimony regarding the events of that afternoon, he added “The humiliation and the mental agony that I underwent was more than I would voluntarily suffer for a million dollars.”

Happily for Jonas, the magistrate declared “You have been grievously wronged, but I can do no more than honorably discharge you, which I do with great pleasure.”  He suggested that Jonas “get redress in the courts against the man who caused your arrest.”

Along with the many businessmen in the front row of seats was Jonas’s sister.  The wave of relief and emotion caused him to break down and he wept on her shoulder.  But he well intended to take the judge’s advice regarding Ritchie.

“Your Honor,” he said, “this is the saddest day of my life.  I fear I shall never get over the humiliation of this day.  But I will make my accuser pay well for it.  My wife is ill and I am afraid she knows of this awful occurrence.”

At the time the building was filled with other apparel firms, including Spitzer & Harris Co, makers of “waists and dresses;” Jacob Aaron Herman, manufacturers of “dresses, skirts, and petticoats for woman and children;” and W. Schwartz & Sons, “cloaks.”  Ellner, Edelstein Co., which also made cloaks, occupied the entire 9th Floor and renewed the lease in 1915.

While we often think only of young women bent over the sewing machines in early 20th century garment factories; the majority of employees in several of the firms here were men.  In 1913 Jacob Guttentag employed 33 men and 12 women making cloaks; in 1915 Goldfinger & Katz, makers of “cloaks and suits,” employed 30 men and just six women.

In December 1919 Edmund Coffin sold Nos. 49-51 West 24th Street to the Manport Realty Company.  The Real Estate Record and Guide pointed out that the leases on five lofts would expire within two months, and the others in 1921; hinting that the buyer had plans for the building.  Instead Manport Realty sold it in January 1920 to Julius Tischman & Son.

By mid-century the tenants list had slightly changed.  Instead of trimmings and women’s apparel the tenants were involved in the leather accessories trade.  In 1952 Fortuna Machine Co. moved in.  The firm manufactured “leathering machinery.”  And by 1957 the Amber Belt Company was here.

Somehow, as the 20th century became the 21st, the building escaped being converted to high-end residential space and still houses small factories.  Somewhat amazingly, the cast iron and terra cotta of the lower two floors have survived almost entirely intact.  Except for the trendy pizza café at street level, the building looks little different than it did on that summer afternoon when Harry Jonas left work only to face public humiliation.

many thanks to Sharon Florin for suggesting this post.
photographs by the author
Posted by Tom Miller at 2:44 AM