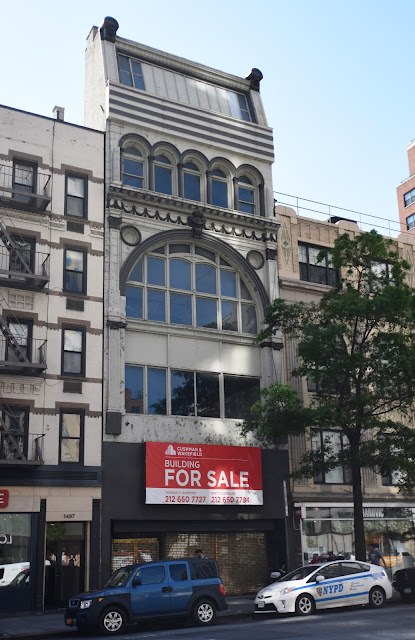 In the first years of the 20th century the Yorkville neighborhood was second only to the Lower East Side as a German enclave.  Max J. Roth, who was born in Bavaria, ran his highly-successful printing and stationery business at No. 1496 Third Avenue.  But unlike his patrons, he did not live in Yorkville.  His home was on Crotona Avenue in the Bronx.

The affluence Roth had attained was evidenced on the night of August 20, 1905 when he closed his store a few minutes before midnight and headed home on the elevated train.  He left the 174th Street Station at about 1 a.m. and headed through Crotona Park, as he did every night.  But on this night two thugs approached from behind and hit Roth over the head with a blackjack.

Although knocked to the ground and stunned, Roth was able to shout “Murder!” before one of the men “chocked him into insensibility,” according to The New York Times the following day.  Neighbors came to his aid and a doctor was called.  He diagnosed Roth with a fractured skull.  The thieves had gotten away with his wallet containing $300 (more than $8,000 in 2016 dollars).  They fled before taking Roth’s $600 watch and his diamond stud.

At the time of the robbery Max J. Roth was already contemplating a business move.  Just over three months later, on December 2 the Real Estate Record and Builders’ Guide noted that architect Charles Stegmayer was taking bids for construction of a “four-story mercantile building” for the printer.  The site was at No. 1495 Third Avenue, directly across the street from Roth’s current location.

Builders Geo. Vassar’s Son & Co. won the contract and Roth’s new building was completed in 1906.  Stegmayer had designed an eye-catching, if unusual, stone, brick and cast iron façade dominated by a yawning arch at eye level with the passing Third Avenue El.  It hogged the attention from other elements like the Corinthian pilasters, leafy swags and the fourth floor arcade.  Above it all a steep mansard attic level leaned back from the cornice.

Roth advertised his business as “wholesale and retail stationery” and operated for years with William P. Havens as his buyer.  Nevertheless, he also advertised a variety of retail items available in the store, including “sporting goods, Kodaks, toys, Victrolas, records.”

In 1917 he leased space to C. Jaeger, who had recently patented a novel product.  Jaeger had recognized the problem faced by restaurants, bakeries and other food purveyors in displaying their goods.  The food quickly spoiled, wilted or otherwise looked unappetizing.

On March 3, 1917 Scientific American reported that Jaeger was manufacturing imitation food.  “This invention relates to the art of reproducing and imitating natural objects such as fruits, vegetables, meats or the like, or manufactured food products, such as pastry, confects, and other articles of manufacture.”

Jaeger’s artificial display products were a success.  By 1918 the company was incorporated as the Plastic Art Novelty & Specialty Co. and Max J. Roth was a one-third partner.  On November 23 that year Scientific American reported that the firm had introduced a new product: artificial cigars.  “Cigars when placed on exhibition, subjected to light and heat of the sun soon deteriorate in value,” explained the article.  The artificial display cigars faithfully reproduced “the form, size, color, manner of assembling or bunching, labeling and any other characteristic of the make.”

In April 1922 Max J. Roth reorganized his firm as M. J. Roth, Inc.  The American Stationer reported “Mr. Roth has given the concern’s department heads and employees the opportunity to acquire a permanent interest in the affairs and profits which has been enthusiastically welcomed by them.” Among those who enthusiastically welcomed the opportunity was Wm. P. Havens, who now stepped into the position of vice president.

The move may have been a way for the aging Roth to begin stepping down.  And by the first years of the Great Depression the business was closed.  Furniture dealers Willy Bolle and Emil Detzel, operating as Bolle Detzel, Inc., leased the building beginning in 1933, the same year that Adolph Hitzler became Chancellor of their native Germany.

Detzel had immigrated to New York in 1923.  If he had an American dream, it would be a difficult one to obtain.  With World War I still fresh on the minds of authorities, his first application for American citizenship was denied “because of the frequency of his trips to Germany and doubt over the validity of a Mexican divorce from his first wife.”

As early as 1931 Bolle & Detzel had aired a small German-language radio program.  They moved the apparatus into the Third Avenue building and continued to do so, featuring “German entertainers.”  In August 1936 an advertisement announced “Bolle & Detzel Furniture House renewal of German musical program, half-hour daily except Saturday.”

The first that many New Yorkers learned of Willie Bolle’s political leanings came on July 27, 1937 when Representative Samuel Dickstein listed the names of six persons whom he described as “expert spies and agitators.”  Third on the list was Willie Bolle, “owner of furniture store at 1,495 Third Avenue, New York City and a notorious Nazi sympathizer,”

Despite growing political heat, in February 1941 Bolle Detzel, Inc. purchased the building it had been leasing for eight years.  By now it seems their half-hour radio program offered more than German music.  The change in programming did not go unnoticed by Federal agents.

On July 30, 1942 both Willy Bolle and Emil Detzel were taken into custody by the FBI.  A statement had been received by the Bureau from the Loyal Americans of German Descent, which accused the broadcasts of “giving direct aid to the Nazis.”  The New York Times reported “They will receive a hearing before the Enemy Alien Control Board. 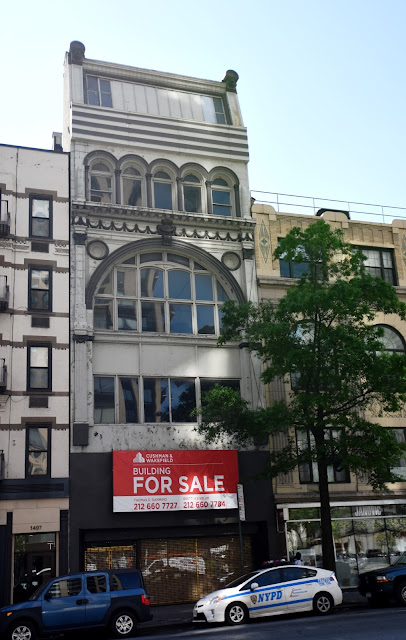 Today the care-worn structure appears vacant with a large For Sale sign plastered across the façade.  The future of the quirky building with the colorful past is unclear.