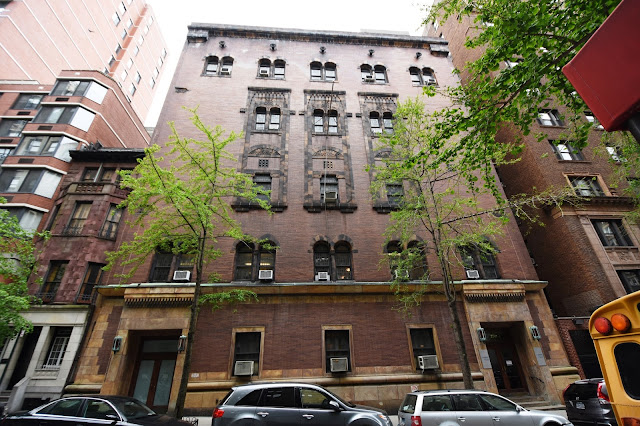 In 1926, nine years after Congregation B’nai Jeshurun relocated to West 88th Street, it purchased the three four-story houses at Nos. 266, 268 and 270 West 89th Street.  The plots were directly behind the impressive synagogue building, and The New York Times, on May 25, noted “The Congregation contemplates erecting a nine-story community centre building, which will be used in connection with the Synagogue in the rear.”

The Congregation was formed in 1825 when a faction broke from the Congregation Shearith Israel (in Manhattan since 1654).  It moved repeatedly until completing its Moorish Revival synagogue in 1918.   If some New Yorkers found its hulking facade somewhat foreboding, they would find the Community Center much more so.

Architect Henry Beaumont Herts received the commission to design the structure.  While he signed his name to the plans, his associate, Louis Allan Abrahamson is given the credit for its design.  Faced in dark brown Roman brick and trimmed in variegated stone, the fortress-like structure might be seen as more menacing than welcoming.

The architects’ design included several unique and fascinating elements.  Just below the stone cornice five gigantic flowers projected, cannon-like, above the paired openings.  The windows of the third and fourth floors were joined vertically by stonework reminiscent of Florentine balconies.  But most unusual of all was the treatment above the two entrances.  Here rows of disconnected Gothic arches hung like stalactites, prompting the AIA Guide to New York City to say that the building “drools ‘Moorish’ tentacles from its entry cornice.”

While the exterior of the Herts and Abrahamson structure hinted at dungeons and cells within; such was not the case.  The interiors were lavishly decorated in period styles.  The staircase hall was Elizabethan Revival, with oak paneling and carved newels and balusters.  The Reception Room picked up the Moorish theme, with an arched entry and intricately-carved ceiling.  Other rooms included the auditorium, classrooms, a ballroom, club rooms and a salon and library for women.

The Community Center was multi-functional.  Funerals, weddings and musical programs, among other events, were held here over the decades.  And it was the scene of lectures, discussions and meetings regarding political, social and religious topics.  They most often dealt with the hot-button issues of the day.

On February 27, 1930, for instance, Louis Lipsky, President of the Zionist Organization of America, addressed the first open forum of the West Side Zionist District here.  His topic was “The Arab Problem, Dr. Magnes and the British.”  A month later a lecture and discussion on “The American Palestine Settlers” was held.

Three years later American Jews would turn their focus from Palestine to Germany.  On January 30, 1933 Adolph Hitler was appointed Chancellor of Germany and soon after the Nazi Party began eliminating political opposition.    As nervousness and fear grew, the Rev. Dr. Everett R. Clinchy, director of the National Conference of Jews and Christians, addressed 400 women of the Sisterhood of Congregation B’nai Jeshurun at a luncheon in the Community Center on October 17.

Clinchy did not blame the Germans, but Hitler, and stressed “the nations of the world must adopt a generous and tolerant attitude toward Germany that she may rid herself of the leaders who control the picture.”  Another speaker that afternoon, Bernard S. Deutsch, rather surprisingly partially blamed the Nazi rise on Jews.  The New York Times reported “Dr. Deutsch denounced the German Jewish industrialists who, he said, afraid of the ‘bugagboo of communism,’ supplied ‘the ammunition which paved the way for the ascendancy of Hitler.’”

The following week, on October 29, delegates from 50 synagogues throughout New York City assembled in the Community Center to discuss the Nazi problem.  They resolved to carry out a boycott of German goods, and to appeal to New York shopkeepers to “remove goods of German make from their shelves and to substitute American-made products.”  Once again, reason was called for.  Jacob Weinstein, who had been an advisor to Jewish students at Columbia University, stressed the importance that “no innocent German storekeeper in this country suffers from the boycott movement.”  He told the assemblage “It must be made clear that we are not being vindictive, but that only by making the program of German anti-Semitism untenable can we end the persecution of our co-religionists.”

In the meantime, the Community Center continued to be an important cultural spot on the Upper West Side.  On December 9 that year an “operatic bill” was offered; and on March 26, 1934 Verdi’s Un Ballo in Maschera was performed.

Zionism and Nazism were sensitive and heated issues.  They collided in the Community Center on December 2, 1937 when a debate was held by the Men’s Club between Supreme Court Justice Joseph M. Proskauer and author Maurice Samuel.

Proskauer spoke first, saying he was against the creation of a Jewish state in Palestine.  He explained “that such a political division with its political military and diplomatic status was bound in the long run to be harmful to Jews in other parts of the world, especially in Europe.”

In his rebuttal, Samuel said a Jewish home in Palestine would not increase anti-Semitism and, in fact, it was the “moral privilege” of Jews to support the cause.  He then took a shot at Justice Proskauer saying “there were some [Jews] who were willing to compromise with Hitlerism.”

That ended the debate.

Proskauer stormed off the stage and left the building, later saying he resented the implication.  Maurice Samuel simply told the audience “He can dish it out, but he can’t take it.”

The fears of the Jewish community concerning Adolph Hitler’s growing program of hatred were realized on November 9, 1938--the first of two days of terror that would become known as Kristallnacht.  At least nine Jewish people were murdered, 30,000 were arrested, and more than 7,000 Jewish businesses were damaged or destroyed.  Synagogues were burnt to the ground.  The New York Times reported on the horror saying “No foreign propagandist bent upon blackening Germany before the world could outdo the tale of burnings and beatings, of blackguardly assaults on defenseless and innocent people, which disgraced that country yesterday.”

The regime offered Jewish Germans one way out—an offer that would not last long.  They could leave the country on the condition that they left their wealth behind in the form of “taxes” and “contributions.”

On December 17, 1938 Rabbi Israel Goldstein railed against the proposal from the dais in the Community Center.  He said it “is on the same level with a kidnapper’s ransom” and called Germany “the gangster among the governments of the world today.”

Throughout the rest of the 20th century the Community Center would continue to serve the congregation and the neighborhood.   Operas were still held here through the 1940s and The Abraham Joshua Heschel School was established in the building in 1983.

The school was named for the theologian who walked alongside the Rev. Dr. Martin Luther King, Jr. in the Selma-to-Montgomery civil rights march in 1965; and of whom literary critic Edward Rothstein said in 2007 “no modern Jewish thinker has had as profound an effect on other faiths as Heschel has.”   In 2007 the school began construction of a new facility on West End Avenue, eventually leaving West 89th Street. 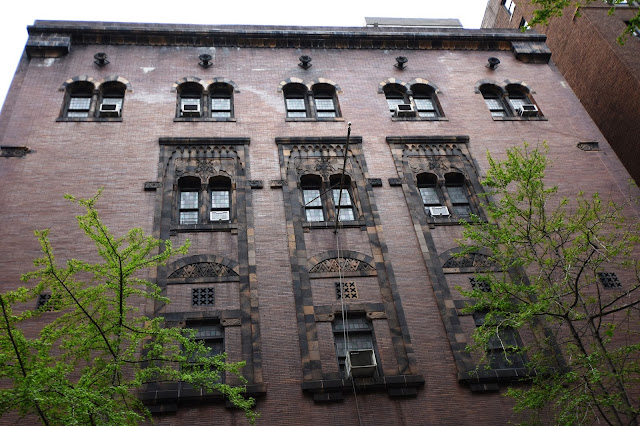 In the meantime, famed preservation architect Giorgio Cavaglieri worked on a restoration of the Community Center building in the last years of the 20th century.  Perhaps best known for his work on the Jefferson Market Library in Greenwich Village, he brought the aging structure back to its 1928 appearance.