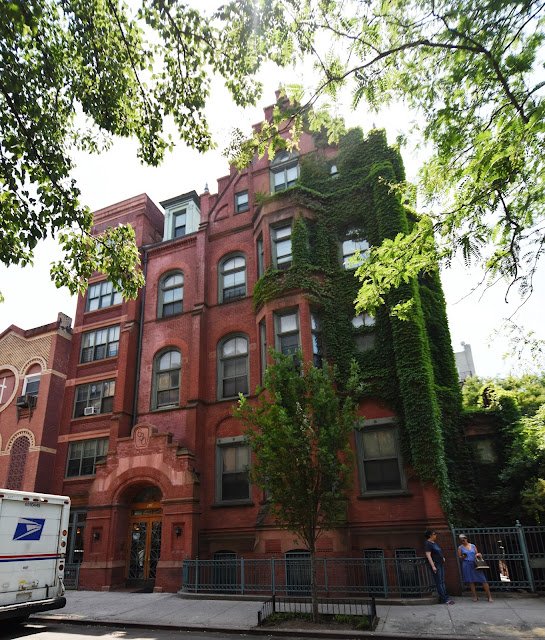 The Children’s Aid Society was founded by Charles Loring Brace along with a few other concerned men in 1853.  Brace had been, according to King’s Handbook of New York City, “engaged in teaching some of the little arabs of the streets.”  The Society was incorporated in 1856 “for the education of the poor by gathering children who attend no schools into its industrial schools, caring and providing for children in lodging houses, and procuring houses for them in the rural districts and in the West.”

A year before the Society was organized, Emily Thorn Vanderbilt was born. The second daughter of William Henry Vanderbilt, she grew to a beautiful young woman who was as much interested in philanthropic causes as the social whirl into which she had been born.  In 1872 she married the wealthy William Douglas Sloane and her generous charitable patronage continued.

In 1886 she and her husband founded the Sloane Maternity Hospital; and in 1888 she personally financed the creation of the Sloane Hospital for Women with a gift of more than $1 million.  That same year she presented the Children’s Aid Society with a school building in the depressed tenement area of the Lower East Side.

For nearly all its buildings the Society turned to the architectural firm of Vaux & Radford, which would eventually design 12 Children’s Aid Society projects.  Calvert Vaux, best known for his work in designing Central Park, had partnered with George Kent Radford in 1872.  The Sixth Street School building would follow the same lines as their other Children’s Aid Society buildings—a blend of Victorian Gothic and Flemish Revival styles. 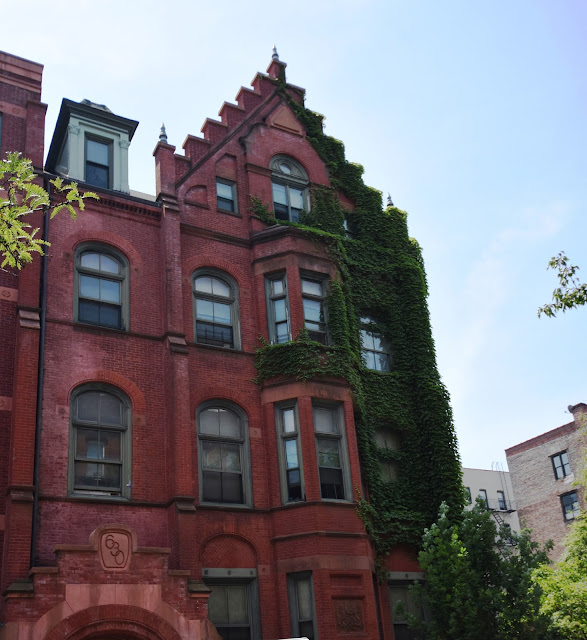 Not only did Emily Vanderbilt Sloane donate the building, she continued to pay for the costs of maintaining the facility.  It was, in effect, her school.

Unlike the academic classes stressed in public schools, the Children’s Aid Society schools within the tenement neighborhoods focused on industrial and domestic arts classes.   Poverty-stricken students needed desperately to learn a trade by which they could earn a living before going out in the world.   In addition to academic basics, boys were taught skills like woodworking, while girls received lessons in nutrition and sewing.  The Sixth Street School also provided its students what were often their only nourishing meals.

In November 1892 the report of the Society noted “The Sixth Street school, under the generous support of Mrs. William D. Sloane, continues its good work among the poor of the east side.  The primary and industrial classes are most successful.”

Each year Emily Sloane gave the Society her check for $3,000 to maintain the school—a little more than $80,000 in 2016.  By the turn of the century inflation had increased that amount to $3,450.  And every year she provided Thanksgiving and Christmas dinners to the youths; a cost of about $150 for each Thanksgiving and $300 for Christmas in the 1890s.  Without these events, the tenement-dwelling children would have no real holiday meals.

The importance of the holiday meals was evidenced on Christmas Eve 1897 when The New York Times reported “The little ones who attend the Sixth Street School, some 350 in number, had a rare treat on Wednesday afternoon.  Mrs. William Douglas Sloane, who has long been especially interested in the work of the school, gave them a Christmas dinner.”

In 1908 the Sixth Street School imitated a new class—one for aspiring office boys.  In the days before fax machines, email, or wide-spread telephone use, office boys were invaluable not only for mundane chores, but for running messages between businesses.  The New York Times described the class on November 8.  Saying that classes which met three times a week taught the trade “as a fine art,” the article explained “They diligently copy letters, striving not to leave out words or letters; they anxiously tie bundles in the most orthodox fashion.”

But special focus was given to the running of messages.  “More than this, they study New York City geography.  When this was mastered they were promised a telephone switchboard on which to achieve grace and dexterity in mixing the plugs.  Before this desirable advancement was reached each pupil had to show proficiency in New York City geography.”

More than simply knowing streets, alleys, and avenues; the boys were required to make on-their-feet decisions.  “It includes learning to judge when it is best to hurry and spend two fares, or walk and use one, all from the tone of voice of the given order.”  The boys were also trained in thinking out a problem if they realized they had been given a wrong address.

As part of their training, the students were sent out into the streets with assignments—some with purposely incorrect addresses, some with implied urgency of the task.  The instructor then waited, timing each boy’s performance.

William Douglas Sloane died in 1915.  Five years later Emily married Henry White, who had been a member of the American Peace Commission and signed the Treaty of Versailles.  White died at their massive Lenox, Massachusetts summer house, Elm Court, on July 15, 1927.

Emily Vanderbilt Sloane White continued to maintain the Sixth Avenue School.  On June 27, 1928 The Times reported on the 34 graduates of the Sixth Street School.  The article noted “During the year 18,002 nutrition lunches were provided and 31,832 bottles of milk consumed by the scholars, who were being trained in healthy dietetic habits.”

The newspaper pointed out that the school’s outreach went out into the tenement neighborhood. “The school nurse made 431 visits to homes and 1,274 children were treated in the school dispensary.”  Yet despite even these efforts, the impoverished neighborhood children faced severe problems.  Three days before Christmas that same year The Times noted “About 260 children suffering from cardiac trouble and malnutrition, who are being treated at the Sixth Street School Health Centre of the Children’s Aid Society…were guests at a Christmas dinner given yesterday by Mrs. Henry White, the former Emily Vanderbilt…The children ranged in age from 4 to 10 years old.”

With the advent of the Great Depression, Emily Sloane White’s school building would be needed for other purposes.  In 1932 it was converted by the Salvation Army and Y.M.C.A., which opened it on March 1, 1932 as “Cheer Lodge,” a men’s homeless shelter.  Here 50 to 100 homeless and out-of-work men were housed.  New Yorkers were asked to donate games, jig-saw puzzles and books to the ironically-named shelter.

Elmer Galloway, executive secretary of the Bowery Y.M.C.A. spoke of the new shelter two weeks later, pointing out that “homeless and jobless young men, driven in from the cold streets, stood in line for lodgings and meals.”  He was proud that the Cheer Lodge offered these men a facility to wash and iron their clothes.

“This day laundry, where destitute men may tidy up and which is operated by the cooperation of civic and welfare organizations,” he said, included “twelve tubs in use all day, in which the men wash their clothing, dry them by gas heat, and then iron them with gas-heated flat-irons.”

On March 13, 1936 Cheer Lodge was transformed from a men’s shelter to one for women and children.  A disturbing incident occurred two years later in August after Margaret Daly, who came from Chicago, temporarily moved in with her three year old son, Robert.

Margaret became friendly with an 18-year old resident, Vivian Platte.  What she could not have known was that Vivian also went by the alias Lauries March.  And the alias Helen Major.

On Wednesday, August 30 a terrified Margaret Daly realized that Bobby was missing.  Officials soon noticed that Vivian Platte had also disappeared.  Police blanketed the city searching for the teen-aged kidnapper and the boy.

The search ended on September 2, 1938 when Vivian and Bobby were found in another settlement house, at No. 184 Eldridge Street.  Vivian explained herself matter-of-factly.  According to The Times, she “told police she took the child because she believed her chances of getting a position would be enhanced by its presence.”

Vivian was held without bail.  She insisted that she had been the ideal custodian of the boy.  “She said she spent $1.60, all the money she had, for milk for the child.”

Mary Nagel typified the heart-wrenching conditions of some of the women sheltered here.  The 32-year old was brought here on July 5, 1939 after neighbors living near a condemned building on East 37th Street told authorities they suspected someone was living in the partly-demolished structure.  Police investigated and found Mary with her seven children, including a nine-month old, “in a room so bare of furnishings that they had to sit and sleep on the rubbish-filled floor,” according to a newspaper.

Mary explained that her husband had abandoned her about 10 days earlier.  Fearing her children would be taken from her, she sneaked them into the abandoned building.  When she went to work as a hospital janitress, her 10-year old daughter Rose watched over the other children.

As she feared, the children were taken to the Children’s Aid Society for care and the infant was sent to the Foundlings Home.  Mary Nagel was directed to stay at the Women’s Shelter on East 6th Street “until adequate assistance could be provided for her.”

The increase of jobs for women brought on by World War II eliminated the need for the Women’s Shelter.  On June 8, 1943 it was closed and the few remaining residents were moved to the Municipal Lodging House on East 25th Street.

Throughout the decades the Sloane Center would host annual events like the “Anything on Wheels Derby” which pitted child against child in races like toddlers pushing baby doll carriages, and boys maneuvering their red wagons.  Children who took cooking classes—boys and girls alike—were eligible to participate in the Nourishing-Meals Contest.  And every year the children voted on Policeman of the Year, based on a local officer’s work with youngsters.

In 1975 the building was taken over by Trinity Lower East Side Lutheran Church after its 1847 building was demolished.  The congregation remained here until the completion of its new church building on East 9th Street in 1993. 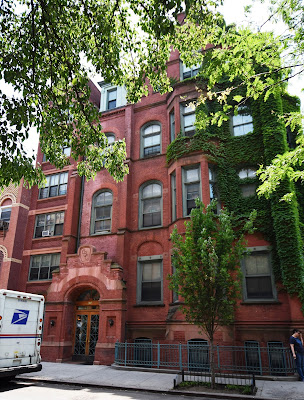 The church’s former landlord at No. 630 East 6th Street, the Lower East Side Service Center, operated a variety of social programs from the building, and then in August 1999 began an alteration into 40 apartments to house AIDS victims.  In converting the building, architectural firm Harden & Van Arnam restored the time-weary Vaux & Radford façade.