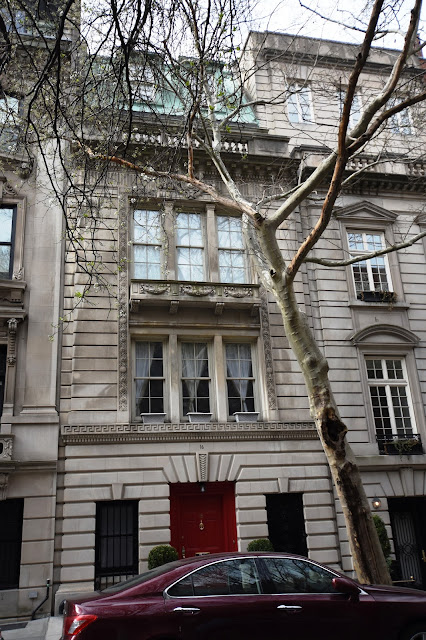 Brothers William and Ambrose Parsons were busy on the Upper East Side in the early 1880s.  For one of their ambitious projects, a row of 11 houses on East 81st Street between Fifth and Madison Avenues, the speculative developers commissioned the architectural firm of Thom & Wilson.

Among the high-stooped, brownstone residences completed in 1884 was No. 16.  It was sold to Susanna Kress, the widow of wealthy brewer John Kress.  Susanna lived in the house only five years and it became home to the Randolph Guggenheimer family in 1889.

Guggenheimer had made his fortune through hard work and ambition.  Starting as a law clerk with a $1 per week salary, he was now the principal in Guggenheimer & Untermyer and one of the city’s wealthiest citizens.  He and his wife, the former Eliza Katzenberg, had two sons and a daughter; and they maintained a country estate, Drexel Cottage, in Elberon, New Jersey and a mansion in Newport.  When the family moved into the 81st Street house, young Charles S. Guggenheimer was attending New York City College.

The wealthy family received a scare around 8:00 on the morning of March 4, 1892 when a small blaze broke out in the house.  The New York Times reported that “The four-story brownstone dwelling of Randolph Guggenheimer, 16 East Eighty-first Street, was damaged $100 by fire.”  The fire damaged nerves more than property—the $100 would translate to about $2,700 today.

In 1897 Guggenheimer started construction on a white marble palace at No. 923 Fifth Avenue.  The mansion was completed two years later, and No. 16 East 81st Street then became home to tobacco importer Gustav Falk and his family.

Falk was born in Germany on April 19, 1841, and arrived in New York City in 1858.  Two years before he moved into the 81st Street house, America’s Successful Men of Affairs said of him “Most of his success in life has been due to native shrewdness and ability.”  At the age of 18, just a year after arriving in New York, he partnered with his brother Arnold to form the G. Falk & Bro. tobacco firm.  Selling both imported and domestic tobacco, the firm was a success.  By 1897, according to America’s Successful Men of Affairs, “he has become one of the wealthiest dealers in the trade.”

Falk and his wife, the former Rebecca Wallach, had five children.  When their son Milton J. Falk married, he and his bride moved into the 81st Street house as well.  The newlyweds entered the comfortable social scene and on October 8, 1905 the New-York Tribune advised society that “Mr. and Mrs. M. J. Falk of No. 16 East 81st-st., spent the summer and early autumn at Bay End, N.J.”

While the Falks were whiling away the summer months in New Jersey, their brownstone dwelling had fallen out of style.  Another wealthy German, banker Paul M. Warburg, was considering erecting a modern residence in the area at the time.  In June 1906 he purchased the two old brownstones at No. 15 and 17 East 80th Street and commissioned architect G. P. H. Gilbert to design a six-story mansion with a projected cost of $300,000.   Almost simultaneously, he bought the Falk mansion.

Intended as an investment, Warburg did not go to the expense of demolishing and replacing the old house; nor did he give the commission to Gilbert.  On May 18, 1907 the Record and Guide reported that the contract for remodeling No. 16 had been awarded to Donald Mitchell and named Harry Allan Jacobs as architect.  The renovations were projected to cost Warburg $30,000—around $780,000 in 2016.

The remodeled residence was completed in 1908.   The outdated brownstone façade was gone, replaced by a modern Beaux Arts limestone front.  The elegant French-inspired home was the latest in residential design.  A plain, rusticated base supported a two-story central section featuring grouped openings within a delicate carved frame.   An especially-handsome stone balconette at the third floor was decorated with carved swags.  The top floor, in the form of a copper-clad mansard, sat back and was slightly disguised by a stone balustrade. 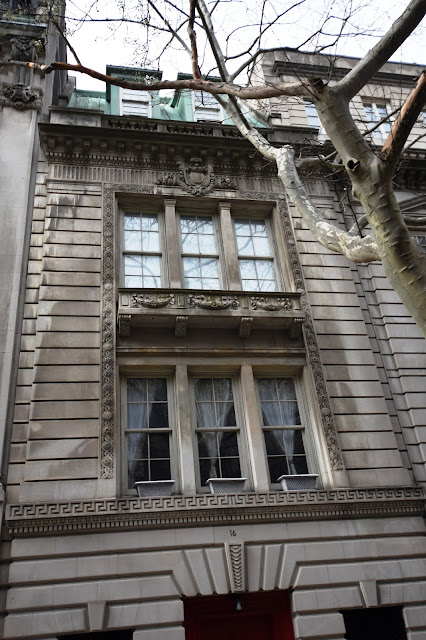 Paul Warburg may have been a bit disappointed when his remodeled house did not sell.  Instead his family would retain possession until 1925, leasing it to well-heeled residents.

On June 27, 1911 The New York Times reported that Joseph Lionel Seligman had given his bachelor dinner the former evening at Sherry’s.  The refined affair had no resemblance to the bachelor parties we may be accustomed to today.  “The guests, numbering about 50, were seated at a table shaped like a horseshoe, in the centre of which was a miniature rose garden.”

His wedding on June 29 to Josephine Knowles took place in Massawitti Lodge in North Hatley, Canada.  The Times noted that following their honeymoon “in the West,” the newlyweds “will live at 16 East Eighty-first Street after Oct. 1.”

The young man, a Yale graduate, had returned to New York City only a year earlier.  Born into a wealthy banking family with offices in Europe as well as the United States, he was sent to Germany upon his graduation from college.  Family ties did not mean a cushy job.  According to him in 1914, his position in the Hamburg office of J. and W. Seligman & Company entailed “licking stamps and carrying telegrams.”

Even when he was brought into the New York Office at No. 1 William Street in 1910, according to him, “I at once started cleaning inkwells as of yore.”  But marriage appears to have given him a raise in salary sufficient to live in style in the 81st Street mansion.  Little Joseph Jr. was born in the house on November 26, 1913; and by 1914 Seligman was a member several upscale clubs.  That year he purchased a new Herres automobile.

Following the Seligmans at No. 16 East 81st Street was the family of Thomas Winthrop Streeter.  He had married Ruth Cheney, a graduate of Bryn Mawr College, in 1917 and the couple had two sons, Frank and Thomas.  They maintained a summer estate “East Hill,” in Peterborough, New Hampshire.  The mansion housed Streeter’s extensive library of rare books.  His collection of Americana was deemed, according to The New York Times, “one of the most important of its type.”

Next in the house were John H. McFadden, partner in the Cotton Exchange firm of George H. McFadden & Brother, and his wife.  But on May 11, 1933 a wire from Reno, Nevada reported that “Mrs. John H. McFadden of New York arrived here today with much baggage and a maid and registered at a hotel, preparatory to obtaining a divorce.”

McFadden lived in the house until 1940 when he sold it to Gifford A. Cochran.  Cochran announced that he would live in the 15-room mansion with his mother, Princess Hohenlohe-Schillingsfurst.

Instead, Cohran leased it; launching the most colorful chapter in the mansion’s history.  His tenant, William Averell Harrison, eventually purchased the house in 1948.  Harriman had divorced his first wife, Kitty Lawrence, in 1928 and married Marie Norton Whitney the following year.  His bride had divorced Cornelius Vanderbilt Whitney to marry him.  The couple filled the 81st Street house with their priceless collection of art, including works by Picasso, Renoir, Cezanne, Degas and Van Gogh.

The son of railroad tycoon Edward Henry Harriman, William (better known as Averell) was highly visible in politics and extremely popular.  He would go on to be Governor of New York, Secretary of Commerce under Harry S. Truman, Ambassador to the United Kingdom and to the Soviet Union.  Entertainments in the 81st Street house were at times more like White House receptions.

On July 2, 1953 the Harrimans’ dinner guests were former President Harry S. Truman and his wife, Bess.  On September 23, 1954 Franklin Roosevelt, Jr. was a luncheon guest; and on February 5, 1955, when son Gordon Stevenson came home on leave from the U. S. Army, luncheon guests included Adlai Stevenson, the Shah of Iran and Queen Soroya, and Margaret Truman.

In April 1955 the Italian Prime Minister, Mario Scelba, visited New York and on April 2 the Harrimans hosted a “private luncheon” for the diplomat.  At the table were Cardinal Spellman, Clare Boothe Luce, Italian Ambassador to the United States Manlio Bresio, “and leading members of the Italian-American colony in New York,” according to The Times.

Harriman had taken office as Governor on January 1 that year.  Seemingly more comfortable in the 81st Street house than in the Governor’s mansion in Albany, he routinely signed state proclamations from here.

The Governor underwent a minor operation in 1956 and recuperated in the New York mansion.  On June 7 former Kimg Michael of Rumania dropped by the house to pay his respects.  Later that year, in December, Golda Meir and Abba Eban were guests for luncheon.

Harriman was sensitive to the growing civil rights movement.  In the 81st Street mansion, on December 31, 1957, he inducted Harold A. Stevens as the first African American to be appointed to the Court of Appeals, New York State’s highest court.

The following year, as Harriman ran for re-election in 1958, he was accused of doing little for minorities by some.  In response baseball star Jackie Robinson asked to hold a press conference at No. 16 East 81st Street.  He told reporters he had “requested the meeting because he didn’t think it was fair for [Sugar] Ray Robinson to say Governor Harriman hasn’t done anything for minorities.”

While Harry Truman was a good friend of Harriman, they did not always see eye-to-eye.  On September 17, 1959 the Harrimans hosted a reception for Soviet Premier Nikita Khrushchev and invited Truman.  The former President declined, saying he had “a private dinner engagement with his daughter Margaret and her husband, Clifton Daniel, in their home at 830 Park Avenue.”

Reporters asked Truman, “Can’t you get out of it?”

“Was it because you don’t want to?”

“That’s probable,” he replied with a reported smile.

As less controversial guest was John F. Kennedy, who was entertained in the Harriman house in 1960 and again in 1961.

In 1969 the fascinating chapter in the 81st Street house came to a close.  New York Magazine noted on September 29 that year that “By way of a comparative bargain, the 14-room home which former Governor Averell Harriman maintained since 1940 at 16 East 81st Street is available for $550,000.”

The mansion with the extraordinary history was purchased by the Government of the Republic of Venezuela; and in 2009 was renovated as a single family home again.