The Federal Survivor at No. 206 Bowery 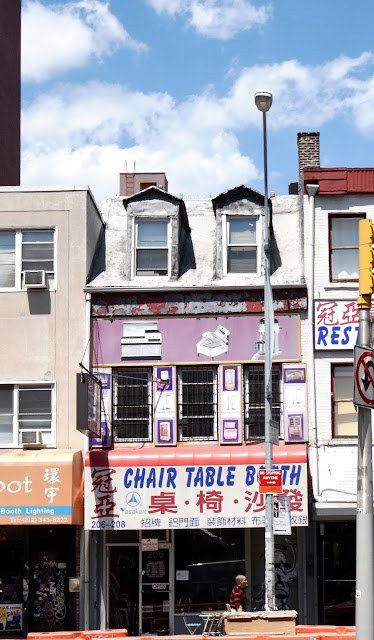 In the early decades following the Revolution the Bowery saw the rise of brick-faced Federal style homes.  While many were upscale residences, the house at No. 206 Bowery was constructed with a shop on the first floor and residential space above for its merchant family.  Completed around 1810 the two-and-one-half story building included the expected elements of the Federal style—Flemish bond brickwork and a peaked roof with high dormers.

William Messerve was one of the earliest owners of the house.  He found himself in trouble in April 1824 when the City Inspector presented the Common Council with an “Ordinance of Correction” of a nuisance.  That nuisance on Messerve’s property was listed simply as “a privy.”

Shortly thereafter Messerve was gone and Walter and Sarah Smith Keeler lived at No. 206 Bowery.  On August 9, 1828 their first child, William Ervin Keeler, was born in the house.  Two years later his sister, Cornelia, arrived.

Walter Keeler operated his shoe store at ground level for years.  By 1837 he seems to have shared the space with another shoe dealer, Smith & Thomas.  That year Charles M. Thomas signed a petition, along with many other businessmen along the Bowery and nearby streets, to protest the proposed extension of Centre Street which would result in the “destroying, mutilating, and injuring every street, lot and building in its course.”

The drafters of the petition used to the Great Fire of 1835 which had destroyed 17 blocks and caused $20 million in property damage to help make its point.  “The severe and awful calamity which befell this city two years ago, it is well known to your honorable body, reduced many from a state of affluence to beggary.”  The businessmen argued that taxing these bankrupt property owners for “public improvements” would be cruel and they deemed the proposal “a project fraught with evil.”

In 1840 John Cooper replaced the Keeler family at No. 206.  His family would live upstairs for more than a decade while he operated his “fancystore” below.  Feminine shoppers dropped in to purchase a variety of items, from sewing needs to gloves and hosiery.  Like Keeler, he shared the ground floor with another business and in 1841 Andrew Oakley listed his dentist office here.

Cooper would remain here at least a dozen years.  Then, by 1854, Thomas Bruns ran his engraving shop here, sharing space with William Wood’s umbrella and parasol store. While Wood continued selling his umbrellas here at least until 1867, C. Casey’s “Ladies’ Dress Trimmings” had replaced Bruns by that year.

The Bowery neighborhood was still respectable in the decade following the Civil War, despite the influx of immigrants into the area.  In the 1870s M. Freeman was a merchant tailor here.  Like their female counterparts, the dressmakers, merchant tailors catered to the upper classes.  But within the decade things on the Bowery changed.

The upper floors of No. 206 were altered to become a lodging house.  Unlike boarding houses, which provided meals, or even rooming houses which offered common space like a parlor; lodging houses were simply a place to sleep.  In 1886 the Third Annual Report of the Bureau of Statistics of Labor explained “All that is required is that the lodger be not too offensively unclean, or so drunk as to make trouble and bring in the police.”  It noted “Most of the upper Bowery places are in good order, and patronized mostly by street salesmen and clerks, whose small wages will not admit of better quarters.”  The Report showed that 75 men could be accommodated at No. 206 Bowery.  Each would pay 25 cents per night.

While 28-year old shoe salesman Abraham Plonsky was apparently not “so drunk as to make trouble,” on May 15, 1896; he was the cause of an even worse offense.  He was caught trying to set fire to the building and was arrested on the “attempt at arson.”

The personality of the Bowery neighborhood continued to change.  Arthur Berman ran his pharmacy at No 206 in the first years of the 20th century.  In January 1907 he commented on the neighborhood to a reporter from the Druggists’ Circular “First it was American, then Irish, then German, and now it is Jewish.”

Berman moved his drugstore to Amsterdam Avenue by the 1920s and the Bowery store saw a string of divergent stores.  Hebald Bernhard’s jewelry store was here in 1909; The Sterling Lighting Appliance Co., Inc. in 1918; and the Gold Sign Company in the first years of the Depression.

Above the Gold Sign Company tenants like 28-year old John McLean rented rooms.  Like many down-and-out Bowery denizens during the Depression, he applied for $5 relief from the Association for Improving the Condition of the Poor.  On November 16, 1935 he presented letter of recommendation from an officer of The New York Times, on the newspaper’s letterhead.

The letter was signed by J. P. Anderson and introduced the bearer as Reginald J. Iverson, former “chief radio telegrapher” for The Times.  The problem was that the officer was “non-existent,” according to officials of the newspaper, and J. P. Anderson was still employed there.  Instead of receiving charity, McLean left the office in handcuffs, held in $1,000 bail on forgery charges.

By 1939 Anthony Casabana conducted “a combination barber school and barber shop” in No. 206 Bowery, according to the Industrial Bulletin that year.  The Tri-City Barber School would remain in the building at least through 1946.  Also in the building at the time was Ace-Hy Plastics Co. which sold cheap novelties.  Its key chains, intended as “prizes, premiums and souvenirs,” dangled “Scotties, skulls, boxing gloves, fielder’s mitts” and other items.

The Bowery neighborhood became the restaurant supply district in the last quarter of the 20th century.  Today No. 206 Bowery is overwhelmed in tawdry signage above the modern storefront.  And yet the personality of the Federal structure survives after more than two centuries.

photographs by the author
Posted by Tom Miller at 3:34 AM

Email ThisBlogThis!Share to TwitterShare to FacebookShare to Pinterest
Labels: Federal architecture, the bowery