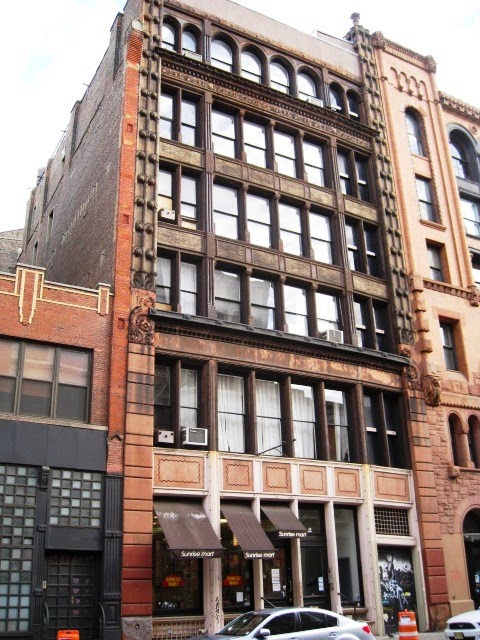 In the fall of 1890 Alfred Zucker was poised to make his mark on the Broome Street block between Wooster Street and West Broadway.   He had already designed the mammoth brick and stone structure at Nos. 484 through 490, at the northwest corner of Broome and Wooster.  Construction of that building was well under way when he turned his attention to the abutting properties at Nos. 492 and 494 Broome Street.

Edward and Peter W. Ehrig ran their saloon and restaurant supply business from No. 494 at the time; but real estate operator Henry Corn had grander plans for the property.  The Broome Street neighborhood was seeing old brick homes and small businesses replaced with hulking loft buildings as the shopping district engulfed nearby Broadway and factories and stores followed on the side streets.

Corn commissioned Zucker to design a six-story retail and loft building on the site.  The architect produced a Romanesque-inspired structure that harmoniously coexisted with his Fleitmann  & Sons building next door; yet showed off its own commanding identity.

Zucker bisected the ground floor: the retail space taking the western portion, while the other half housed the service and upstairs entrances.  Rusticated brownstone piers rose two stories, capped by elaborate medieval-style carvings.  The upper factory floor openings were framed in cast iron and supported by thin engaged columns.   The spandrels were filled with brick and ornamented with cast armor-like fish scale plates.  Most eye-catching of all were the unique, foliate-ornamented side piers.   The multi-story forms depicted stems and buds, like the infant fronds of a fern poised to open.

The structure was completed by the end of 1891 and A. G. Spalding &  Bros. took the retail space.  The sporting goods store was already in operation on New Year’s Day 1892.  For its opening the store focused on the huge craze that was sweeping the country:  bicycling.   A. G. Spalding & Bros. touted the latest models.
An advertisement placed later that year listed some of the items a fitness-conscious man could find here.  “Gymnasium, athletic and sporting goods, base ball supplies, lawn tennis, lacrosse, track, boxing gloves, athletic clothing.”

By 1895 Julius C. Schmidt’s wholesale stationery firm was located here.  On October 3 that year The American Stationer announced Schmidt’s end-of-season sale, saying he “has in stock many import samples of goods carried by stationers and from which he has taken orders during the past year.  He is now prepared to sell them at low figures in order to make room for next year’s samples.  Dealers who wish to secure a supply of stationery articles, as well as toys of all kinds, at one-half usual prices should give him a call.  ‘First come, first served.’”

By July 27, 1901 when Frank R. Houghton sold the building to William G. Rose, Fleitmann & Co. had outgrown its mammoth headquarters next door and had spilled into No. 494.  It would lease offices here for at least another five years.  Another tenant, Rue. Hallett & Godone, was like Fleitmann a dealer in “domestic and foreign silks and satins.”

In 1909 Jacob Weinberg’s paper box factory took up the fourth floor.  On Saturday, December 18 a fire broke out, resulting in $2,000 in damages.   Once the blaze was extinguished to the satisfaction of the firefighters, they left the scene; leaving behind piles of paper and cardboard.

An insurance company watchman, James Bennett remained.  Around 8:00 on Sunday morning, just before his relief arrived, he made one last round of the building.  He discovered the fire on the fourth floor had reignited.  Jacob Weinberg was awakened and rushed to the scene.  The second fire caused an additional $50,000 damages.

Weinberg blamed it on sloppy work by the firefighters.  “Mr. Weinberg declared that he believed the fire on Saturday night had not been attended to thoroughly.  The first blaze started in a pile of paper, and the manufacturer said he believed this had smoldered all night.”

Two years later, in October of 1912, the California winery Italian Vineyard Company leased the entire building to house its New York showroom and warehouse.    The company’s vineyards covered 4,000 acres and the company was successful in its New York location for years.  Then in December of 1917 a resolution was introduced in Congress calling for a Constitutional amendment prohibiting the manufacture and sale of alcohol.

The Italian Vineyard Company would be a vocal lobbyist against Prohibition.  The firm’s efforts, of course, would be fruitless.  In 1919 the company moved out and the P. M. Frank Disinfecting Company, dealers in “sanitary products,” soon purchased the building.  Drug and Chemical Markets noted on December 24, 1919 that the building would be “altered for use as a factory.”  The title was put into Hattie M. Frank’s name.

While the P. M. Frank Disinfecting Company used the building to manufacturing its cleaning supplies; it did not need the entire space.   A month after the purchase, Hattie Frank leased several floors to the Francisco Arango Company of Tampa Florida at an aggregate rental of $52,500.  At the same time the Litho Stone Company took the store and basement for $16,200.

Also in the building by 1922 was the Rugby Leather Goods Co., Inc.  Here the firm manufactured women’s leather hand bags and men’s wallets.  Its catchy tag line was “A goal every time with the Rugby line.”

Vibrant 19th century loft buildings like No. 494 Broome Street suffered neglect through much of the 20th century.  At some point the cornice was sadly lost, leaving a blank scar.   Then the Soho neighborhood experience a renaissance as artists rediscovered the vast (and relatively inexpensive) sunlight-filled lofts.  No. 494 was among the first in the trend.  In 1978 it was converted to joint living and working quarters for artists—just one expansive loft per floor—above the retail store at ground level. 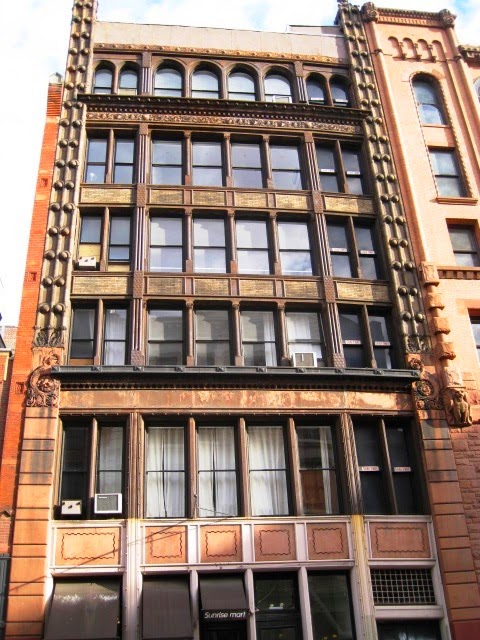 As it did in 1892, Alfred Zucker’s No. 494 Broome Street holds its own against his formidable Fleitmann & Co. building next door.  And those fabulous climbing plants along the sides are mostly responsible.