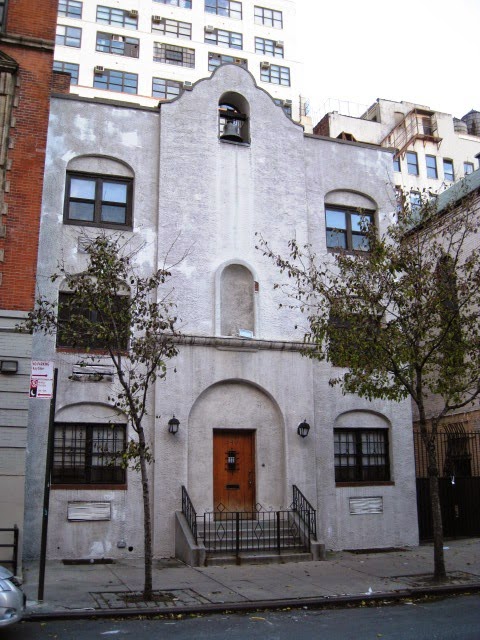 Sparked greatly by the Industrial Schools Acts of England, Ireland and Scotland, the concept of Industrial Schools had reached New York by the end of the Civil War.  The lofty purpose of the schools was to care for “neglected, orphaned and abandoned children” and to teach the “street arabs” a trade so they could survive in the world.

By 1872 the Fifty-Third Street Industrial School was established at No. 340 West 53rd Street.   A year later there were 986 children enrolled, with an average attendance of 269.  That year the Twenty-First Annual Report of the Children’s Aid Society reported that the school “has grown steadily in numbers and usefulness.  The Infant School is made especially interesting.  Through the aid of Dr. Leigh’s type, the children make rapid progress in learning to read.  All departments are well conducted.  The industrial work is made attractive and profitable.”

The school continued here until 1890, when it was either razed or remodeled for the German-Swiss Evangelical Church.   Its congregants lived surprisingly far from the established German neighborhoods of the Lower East Side and Yorkville, further to the north on the East Side.  At the same time another immigrant group was increasing in number.

By 1890 2,038 Greeks had arrived in the United States, most of them through the Port of New York.  On March 12, 1892 the religious journal The Friend reported “A new Greek church was opened in this city January 10th.  The services were attended by about 500 persons and were conducted by the priest, T. Ferendinos, who has the rank of Archimandrite, and is in full charge of the church, having been appointed by the Metropolitan of the Greek Church in Albany.  The place of worship is in the basement room of the German-Swiss Evangelical Church, No. 340 West 53d Street, which has been refitted for this special need.”  Among the worshipers that day were the Consul-Generals of Greece, Russia and Turkey.

In 1897 Frank Moss, in his The American Metropolis, briefly mentioned the congregation which was referred to by most simply as the “Greek church.”  He said that the Eastern Orthodox “have their principal church at Number 340 West 53d Street, and [their] principal minister is the Reverend Agathodorus Papageorgopoulous.  These people follow the Nicene Creed, and they show their devotion to it by standing during prayer,.”

Ironically, Moss’s mention of the Greek church came during its last year on West 53rd Street.

On Bleecker Street in Greenwich Village, the Church of Saint Benedict the Moor was founded in 1883.  The ground-breaking church was the first established for black Catholics north of the Mason-Dixon line and was named for St. Benedict, born of African slaves on a Sicilian estate.  Now, in 1883, the church moved to No. 340 West 53rd Street.

By 1917 St. Benedict’s had moved to the former Baptist Church nearly next door, at No. 344, built in 1869.  No. 340 now became the School of St. Benedict the Moor.  The Official Catholic Directory felt it prudent to add the apostrophic note “for Colored People.”  Two sisters of the Blessed Sacrament taught the 21 boys and 36 girls enrolled here that year.
The Church of Saint Benedict the Moor was a fixture on West 53rd Street through the first half of the 20th century.   Beginning in 1953 it was reassigned to Spanish friars of the Third Order of St. Francis and became Sacred Heart of Jesus Church.    In 1965 the old school and the adjoining building at No. 342 were demolished, replaced by a three-story rectory designed by architect Joseph Mitchell.  The structure, costing $200,000, was completed in 1967 and reflected the Spanish roots of the friars. 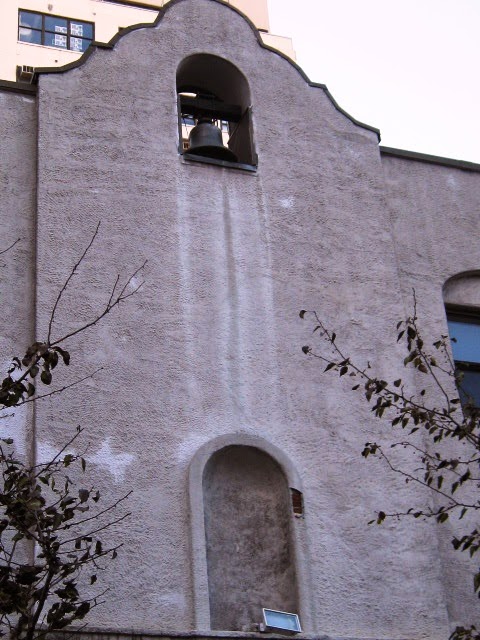 Mitchell’s stucco-covered façade harkened to the Spanish missions of the Southwest.  A niche above the entrance was created for a statue of the Virgin Mary which had perched at the main church’s second story for years.   The focal point was the scalloped parapet which housed the bronze bell; iconic of Spanish mission architecture.

Although gentrification was changing the gritty Hell's Kitchen neighborhood by the late 1980s; even priests were not exempt from danger here.  On April 30 the 63-year old Rev. John Riera was walking into the rectory around 1:45 in the morning after visiting a friend.  He was attacked from behind, pushed into the foyer and knocked to the floor.  The thug stole $50 from the elderly priest. 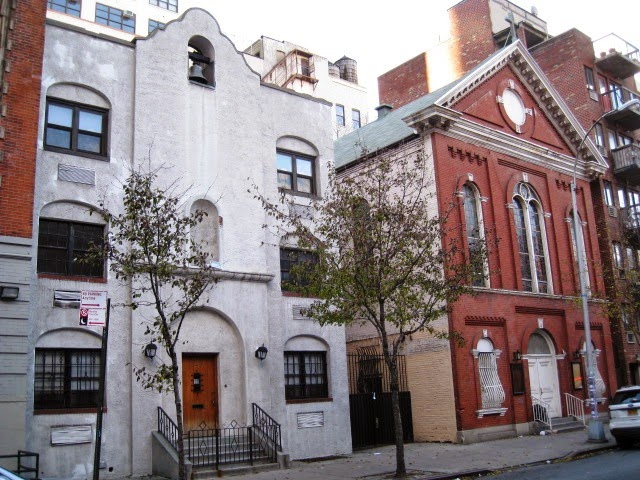 Later the parish was reduced to mission status and the rectory building converted to apartments after 2011.  The religious statue was removed from the niche; yet otherwise the exterior of the surprising Alamo-like structure was little changed.

non-credited photographs taken by the author
Posted by Tom Miller at 3:11 AM