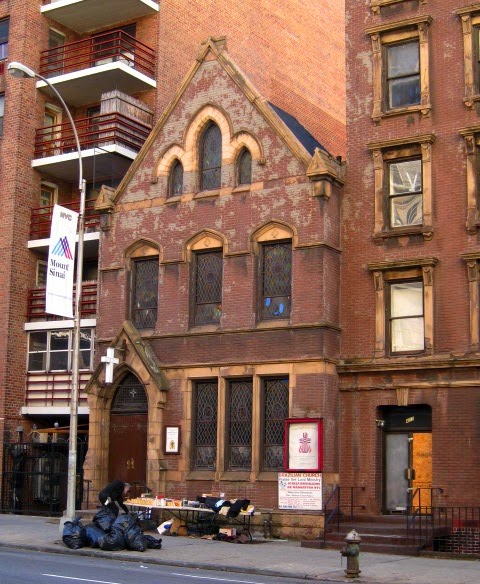 Since its organization in 1821 with just four members, the Central Presbyterian Church had a history of outreach.  The original church was erected on Broome Street near Elm.  When hordes of men headed West during the California Gold Rush of 1849, the Central Church members recognized that the miners would arrive in a wilderness with no spiritual guidance available.  According to Frank Leslie’s Sunday Magazine later, they “during the gold fever in California, sent the frame-work of a church, in sections, by ship around Cape Horn for the Rev. Dr. Willets, who was a missionary and former teacher” in the Sabbath-school.

When the Central Presbyterian Church burned down in 1854 it was quickly rebuilt.  Then in 1866 the congregation moved uptown to West 57th Street between Broadway and Seventh Avenues and a new church was completed in 1878.  The church did not entirely give up the old neighborhood completely.  A chapel, called the Mizpah Chapel, was opened in a Broome Street basement in 1868.

Only a few blocks to the west of the new church was the notorious and dangerous Hell’s Kitchen neighborhood.  It was rife with crime, vice and poverty and did not escape the notice of Central Presbyterian Church.  To church members it fairly cried out for a mission chapel.

In 1880 the Mizpah Chapel moved into a tenement apartment on 10th Avenue, in the very midst of the slum.  Many of the impoverished immigrants embraced the chapel, called by The New York Times “a mission enterprise of the Central Presbyterian Church.”   Theological students took the pulpit during the formative years; yet the New-York Tribune noted in 1886 that “no Sunday has passed without a service.”  It was quickly apparent that the rented room had became inadequate.

In 1884 an anonymous member offered $5,000 to build a new Mizpah Chapel (the Hebrew word means “watchtower”).  He was trumped by a trustee, Samuel Inslee.  In 1885, “seeing the need of a suitable house of worship, he bought the lot No. 420 West Fifty-seventh-st.,” reported the New-York Tribune a year later.

In December The Manufacturer and Builder reported “A two and a half story mission house is to be built at 420 West Fifty-seventh street, at a cost of $14,000.”  The Real Estate Record & Builders’ Guide called the proposed building “a small place of worship” and described the façade as “being of Philadelphia pressed brick and brown stone.”  The relatively small structure, just 25 feet wide and 80 feet deep, the journal noted that it was being designed by architect Samuel A. Warner.

By the summer of 1886 the handsome little building was complete.  Warner had produced a charming Gothic structure endearing in its simplicity.  Red brick was trimmed in brownstone and sat on a rough-cut stone foundation.  A projecting stone portico sat two steps above the sidewalk.  Warner’s design was accentuated by brownstone band courses.  His simple mission chapel would not intimidate the 500 underprivileged worshipers which the chapel could accommodate. 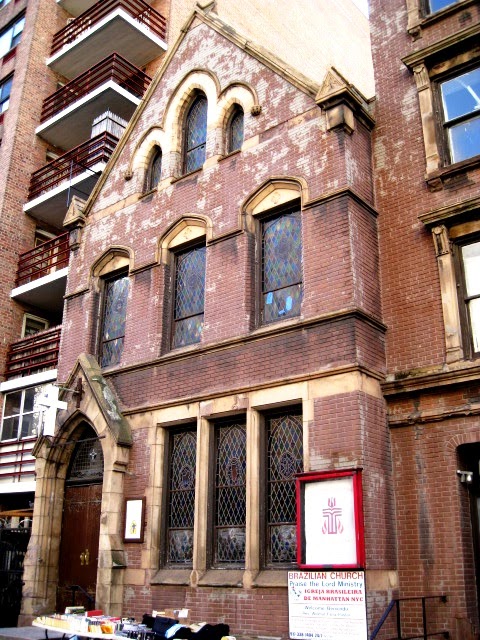 Despite the unpretentious façade, the New-York Tribune noted that the total cost of the building and lot had risen to $28,000—more in the neighborhood of $715,000 in today’s dollars.  It was all paid for by Samuel Inslee.
On June 20, 1886 the first service was held in what The Times called “the pretty structure.”  By now the chapel had “more than 100 communicants, 500 Sabbath school scholars, and 50 teachers,” according to the newspaper.  The New-York Tribune reminded readers that “The chapel was organized in 1868 for the purpose of mission work among the so-called middle classes.”

The grand churches populated by New York’s wealthy closed during the summer months as parishioners closed their mansions and escaped the city heat to Newport, Bar Harbor and other resorts.  Conversely, the immigrants of Hell’s Kitchen suffered through in their stifling tenements.  Mizpah Chapel remained open; yet the Sunday School teachers—drawn from Central Presbyterian Church’s affluent congregation—were often gone.  Recognizing the possible frustration of chapel members, James Yereance sent out letters on September 23, 1889   A sort of pep talk, it announced “Rallying Day.”

“While Mizpah never takes a vacation, but through summer’s heat and winter’s cold no interruption has been had to the services of Sabbath School, preaching, and devotional meetings during the nine years that we have conducted the work, yet many of the teachers and scholars are absent from the city some portions of the summer.

“Therefore, now that we all have returned to good health, with no death in the school to record, we desire every teacher and scholar to be present promptly at the service at 9:30 Sabbath morning next, which we will observe as ‘Rallying Day,’ with an appropriate thanksgiving and consecration service as per program appended.”

The ministers of Mizpah Chapel went beyond mere preaching.  They recognized the plight of the Hell’s Kitchen population and actively worked to improve it.  Such was the case in March 1903 when Rev Irving P. Withington spoke on the subject of Child Labor at the request of the Child Labor Committee.

Samuel Inslee’s influence on Mizpah Chapel was felt even after his death.  When his widow, Helen C. Imslee, died in her mansion at No. 50 West 72nd Street in 1908 she left an impressive estate.  Paintings were bequeathed to the Metropolitan Museum of Art, and large sums were willed to various charities.  Among them was Mizpah Chapel which received $5,000; a generous donation. 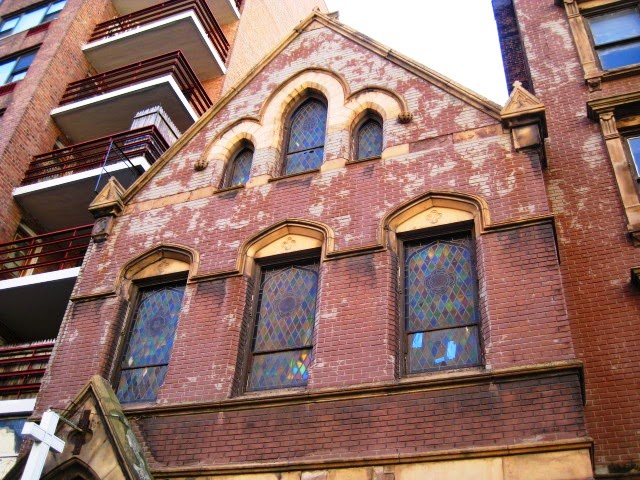 The work of Mizpah Chapel did not go unnoticed by the upper levels of the Presbyterian Church.  In 1910 W. L. Amerman, Secretary of the Foreign Missions Committee of the Presbytery wrote to the chapel saying in part, “A good many Presbyterian churches in the city have concluded that they were either too rich or too poor for work on this line, and some others have considered it and planned to undertake it later on. Meanwhile, Mizpah Chapel has gone ahead and made a success of it.”  The Secretary ended his letter saying “Only keep on and who knows but that in time people will say, ‘The Central Presbyterian Church?  Oh, that’s the one connected with that Mizpah Chapel, where they have the remarkable missionary interest.’”

As a way of attracting street-tough boys to the church, and hopefully keeping them away from the lures of crime and vine, the Chapel organized athletic teams.  On January 14, 1914 the Princeton Alumni Weekly reported on a basketball game between rival teams of the West and East Sides.  The hard-edged character of the players did not go unnoticed.

If the teen-aged boys in the neighborhood were a bit rough; their mothers were not push-overs either.  On the afternoon of December 13, 1922 a group of women were singing “My Faith Looks Up to Thee” in the Mothers’ Bible Singing Room of the Mizpah Chapel.  The pastor’s wife, Mrs. C. R. Truby, played the piano.

Suddenly fire broke out in a flue connecting the Singing Room to the Class Room on the ground floor.  The sexton, Charles Cadley, dashed out of the building to ring a fire alarm.  The women were here to sing hymns and had no intentions of being interrupted by a mere fire.

“The flames came through the wall and burned away a section of it, but there was no pause in the playing,” reported The New York Times the following day.  “As the firemen set about cutting away the wall to get at the blaze, the class, having ended the hymn, gathered about and watched the fireman at work.”

After the fire within the wall had been extinguished, Acting Fire Chief Curtin remarked “The coolest lot of women I ever saw at a fire.”

In 1929 Central Presbyterian Church moved once again, this time to Park Avenue and 64th Street.  Mizpah Chapel remained on West 57th Street, where it was most needed.  The following year, on November 30, a set of memorial windows to Anna C. Bush was dedicated.

The same year that Mizpah Chapel was organized on Broome Street, in 1868, the Church of the Strangers had been established.  According to its pastor, Rev. Dr. Paul Mansfield Spencer, in 1945, “The Church of the Strangers was born to meet conditions following the Civil War, which were still fresh in the minds of those engaged in that great struggle.  The bitterness, which wars always engender, was rampant both north and south of the Mason-Dixon Line.  Southerners coming North were not welcomed in Northern churches any more than Northerners going South were welcomed in Southern churches.”

The non-denominational Church of the Strangers was begun “to provide a spiritual meeting place for Southerners.”  It was paid for by Cornelius Vanderbilt.

Now in 1944, a year before Spencer’s explanation, the church was in financial trouble.  On August 24 The New York Times reported “The Church of the Strangers has been evicted from its place of worship at 309 West Fifty-seventh Street in a mortgage foreclosure action in which treasured belongings such as the holy communion service were piled on the sidewalk in front of the edifice and pulpit furniture and pews were taken by the authorities.”

Dr. Spencer, who was 72-years old at the time, told reporters “The Church of the Strangers will go on.  They may have had the legal right to oust us, but I feel they did not have the moral right.”

Mizpah Chapel, only a block away, opened its doors to the now-homeless church.  The very next Sunday The Church of the Strangers held its 11:00 services in Mizpah Chapel.  It was the beginning of a coexistence that would last several years.

On November 15, 1947 it was announced that Mizpah Chapel had been organized into an independent congregation.  No longer a chapel of Central Presbyterian Church, it took the name of Trinity Presbyterian Church.  The little church continued to serve the Hell’s Kitchen neighborhood throughout the 20th century.  Its willingness to adapt and its genuine West Side personality was evidenced on Saturday November 22, 1975 when the Society for Animals’ Rights presented “films, lectures and demonstrations of dog tattooing” in the building.

Trinity Presbyterian Church continues on in the careworn structure.  The congregation’s website aptly describes its plight.  “Lacking endowment and wealth…able to pay its pastor only a half-time salary, and dependent on volunteers, Trinity—like the varied immigrant populations that have lived in its neighborhood over the years—is a community bound together in a common struggle, searching for hope of a new life in the midst of doubt and material weakness.” 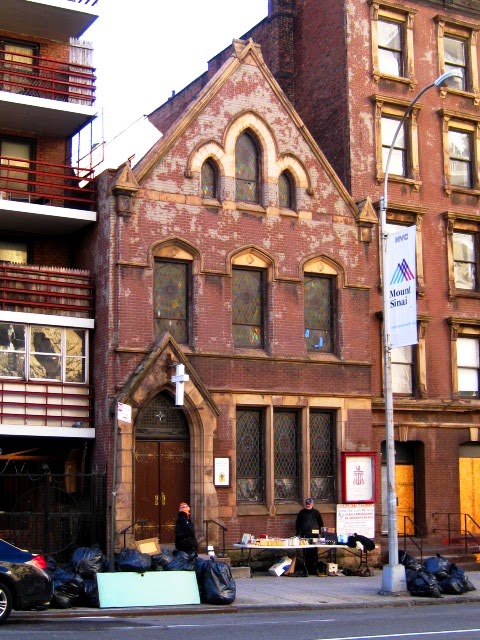 That material weakness is evident in the façade of Samuel A. Warner’s time-weary 1886 Mizpah Chapel.  Amazingly the unbroken history of Trinity Presbyterian continues in a charming relic of days when a mission was necessary in the depraved section.