The Defender of the Flag - Abingdon Square 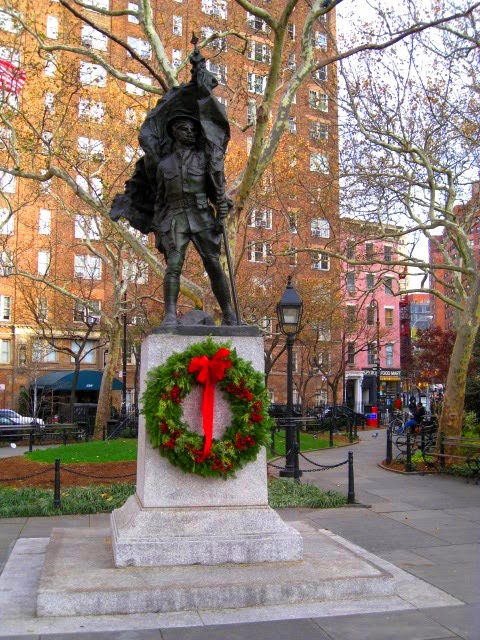 Unlike the orderly grid of streets and avenues forming above 14th Street in 1831, Greenwich Village was a confusing tangle of streets—some winding, some diagonal, and a few only a block or two in length.   Old cow paths and property border lines morphed into streets; later intersected by pin-straight new roads.  The result was often irregular, orphaned islands of land.

When Eighth Avenue was extended northward in 1816, an oddly-shaped plot of land was marooned between it and Bank Street, and Hudson and Troy (renamed West 12th later) Streets.

That year, on March 4, the Common Council agreed to make the trapezoidal (and otherwise useless) plot a park.  Because it sat within the former 300-acre estate of Sir Peter Warren, whose eldest daughter had married the Earl of Abingdon, it was christened Abingdon Square.  The city spent $3,000 to acquire the land and enclose it in a cast iron fence.  Three decades later, in 1886, Calvert Vaux and Samuel Parsons, Jr., then Superintendent of Parks, redesigned it.

The Victorian spruce-up would not last long.  By the first decades of the 20th century the Greenwich Village neighborhood was terrorized by street gangs; most notably the Hudson Dusters.  Abingdon Square was a visible landmark of the gang’s territory.

On January 18, 1914 a writer for The Sun wrote, “Greenwich Village, the old Ninth ward, more than any other section of New York city has preserved its individuality.  Within its well defined boundaries stretches a maze of crooked streets; here are the remains of its old Bridewell, incorporated in the walls of a West Tenth street brewery; there is its own market, once the site of an Indian village.  So what is more natural than that the Hudson Dusters should represent a type distinct from the other gangs that rise out of the social morass, the Marginals, the Gophers and the Pearl button gang that prey on their respective districts of the West Side.”

He continued “…at night the gang lurches into life.  It seethes through the district, slips about the corners of Abingdon Square, lurks in Barrow and Bethune streets and vanishes in the shadows of Pig alley.”

Although the residents continued to use the square, it fell into neglect.   A New-York Tribune reporter complained on July 26, 1919, “Abingdon Square needs a trimming.  The grass in the little park is tall and shabby and the shrubbery is in bad shape. Storekeepers in the neighborhood say Park Department employes rarely visit the place.”

Nearby resident John Straut, who had lived on the Square for 66 years, chimed in.  “That park is a disgrace  It has been so neglected that is has become a veritable eyesore.”  And a month later another long-time Village resident, August Druttman, described the area.  “Things have been about the same around here for the last twenty-five years.  Few of the buildings have changed, and things go along smoothly with business good most of the time.  The only complaint I could possibly have is that gangsters do just about as they please, robberies and fights increasing all the time.  But that’s happening all over the city and can’t be held against Abingdon Square.”

But change was on the horizon.  Scores of Greenwich Village youth had sailed off to Europe to fight, never to return.  Now, spearheaded by the Jefferson Democratic Club, the headquarters of which faced the Square, a memorial statue was planned for the park.  John Straut said “All the money for this has been raised by public contributions.  The work cannot be completed soon enough to satisfy the people of this part of town.”

J. R. Morgan of the Army Embarkation Service agreed.  The Trowmart Inn, directly in front of the park, had been used during the war to house army nurses.  It would soon be returned to a hotel for working girls.  “The only bit of park around here has been this neglected plot.  But if a monument is erected and it becomes a prettier spot, this house will seem more inviting.”

Sculptor Philip Martiny, a Village native, was at work on the on the statue in October 1919 when The Sun reported “It commemorates the deceased soldiers and sailors of Greenwich Village.”   But it would be another two years before the unveiling.

Martiny chose to represent a common foot soldier, or doughboy, in a naturalistic post.  He tackled one of the most difficult challenges for a sculptor—the depiction in metal or stone of a flag.  His solution was creative.  As the memorial neared completion on June 26, 1921 the New-York Tribune described it.

“It represents in heroic size a doughboy color sergeant, whose left hand grasps a flagstaff, the end of which is firmly planted on the ground, the folds of the flag falling about his shoulders.  In his right hand he holds a revolver, and the general attitude maintained is of readiness and defiance.” 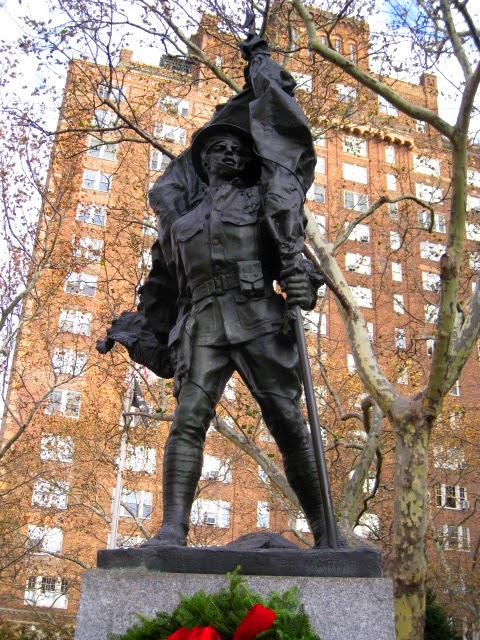 Through his “Defender of the Flag,” Martiny simultaneously depicted the dignity and resilience of the soldiers, and horror of war.  The helmet of the 7-1/2 foot high doughboy was tilted because of a bandage around his head.  No conquering general whose name would be remembered in history books; the Greenwich Village soldier was no less a hero.

The Tribune said “Mr. Martiny has attempted to portray not only the indomitable spirit of the Yankee crusader, but the subtler significance that the American flag bore in the deciding events of the war.  It is done in a spirited manner and the treatment of the banner, always regarded as a difficult problem in sculpture, has been ingeniously solved.”

The sculptor’s work was completed on June 22, 1921 and sent to the Bureau Brothers foundry in Philadelphia for casting.  Architect William A. Hewlett designed the simple, eight-foot granite base.  In all, the completed monument would cost $10,000 (about $130,000 today) and would stand 20 feet high.

The stars and stripes that draped the memorial were removed on Labor Day.  “The folks who live down there were determined that the occasion be made one calculated to please a group of their boys, who were represented yesterday by a score of old women dressed in black,” reported the New-York Tribune.  Equally eager to honor their heroes were the resident gangsters.

“There was shooting yesterday down in Abingdon Square,” wrote the New-York Tribune the following day.  “Shots have echoed in that triangular patch on other days when the Hudson Dusters rallied there to repel invading hordes of trouble-hunting Gophers from old Chelsea.  But this was different.

“Gophers stood shoulder to shoulder with Hudson Dusters, gang rivalries forgotten, as enshrouding flags were drawn from the bronze figure of a doughboy that had been mounted on a block of granite in the exact center of this shabby, insignificant park, with its two naked trees inclosed by an inhospitable iron fence.”

The toll that the war had taken on Greenwich Village was evidenced by the more than 100 Gold Star Mothers in the reported group of around 20,000 spectators.  The group was established by Grace Darling Siebold in 1918 to help other grieving women whose sons never returned from the war.  It was named after the Gold Star that families hung in their windows in honor of their deceased veteran.

Two stands had been erected within the iron fence, which was decorated with bunting and flags.  “In one sat the great men come down to participate in the ceremony,” said the Tribune.  “In the other there were just two rows of old women in black, the aristocracy of Abingdon Square, an aristocracy of sacrifice.  These were the gold star mothers, whose sons are still in France.”

Former Governor Al Smith brought the women in the crowd to tears as he spoke of the lost boys.  “This monument shall be a lesson in usefulness and devotion, as much a monument to these mothers who went down into the Valley of the Shadow of Death that these boys might live and who gave them freely in the country’s hour of need.”

The emotion of the moment was too much for one mother.  Smith’s speech was interrupted when Catherine Smith lost consciousness and collapsed.  Someone in the crowd explained “Both her boys, Jimmy and that other one, were killed.  The fellows brought her over here from that place she lives in down in Hudson Street.”

Three Greenwich Village children, wearing tiny uniforms of the Army, Marines, Navy and a Red Cross nurse, pulled the cords to unveil the memorial.  The band struck up The Star Spangled Banner and Mrs. Smith pulled herself to her feet with the others.

“For old Mrs. Smith it was both her sons who stood there on the pedestal,” mused the Tribune reporter, “and if it meant as much for the others who stood by perhaps this was because none there was able to see distinctly through tear-filled eyes as stalwart doughboys and sailors staggered forward beneath the weight of a huge wreath of smilax and flags that they hung on the pedestal.”

Mayor Hylan, in accepting the statue, said “Of all who went forth at the call of their country, none brought more luster to the shield of America than the men from this quarter of our city, of which Abingdon Square is the center.”  Following his short speech, the police glee club sang Auld Lang Syne; then a group of riflemen wearing olive drab uniforms fired three volleys.  A lone bugler in a nearby attic window responded with Taps.

“And that was the shooting yesterday down in Abingdon Square.”

While Martiny’s “Defender of the Flag” did not always garner critical acclaim; for decades it was the center of Greenwich Village tributes on Veterans Day and Memorial Day.  But by the end of the 20th century, the practice faded away and the memorial sat mostly overlooked.

In 1993 the Parks Department restored the monument.  It was cleaned, and then treated with walnut shells to remove the grimy patina.  Afterward it was repatinated and the granite base was repaired. 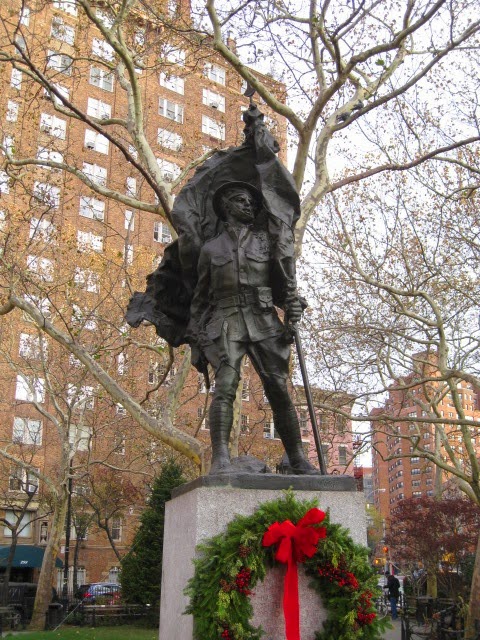 The efforts did not restore the public interest in the Defender of the Flag.  Once an emotionally-charged centerpiece of the Village, it now stands in the oddly-shaped park little noticed.