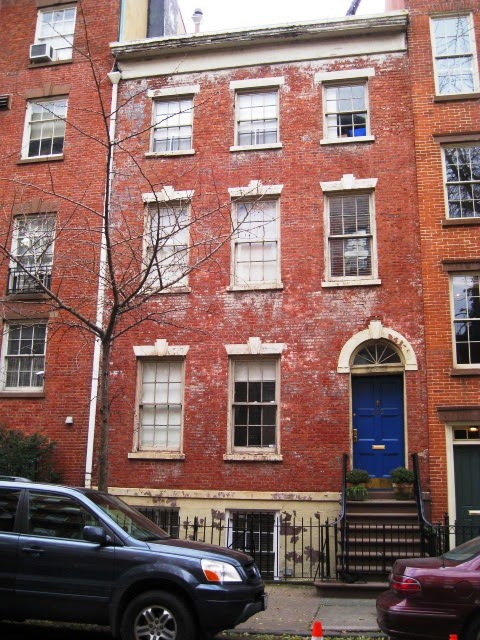 Four years before the 1822 yellow fever epidemic would send panicked New Yorkers north to the rural hamlet of Greenwich, Aaron Henry saw the area's potential.  In 1818 he constructed nine new homes on a single block along Hammond Street.    Among them was the handsome, three-story residence that would be renumbered 282 West 11th Street half a century later.

The entrance had a simple paneled door with no sidelights or elegant enframement.  It did, however, have a lovely fanlight that spilled daylight into the entrance hall.  Henry faced the house in Flemish bond red brick and added attractive double keystones to the splayed brownstone lintels.  He carried out the motif above the handsome arched entrance.  The extra-high basement and resulting steep stoop is highly unusual; leading some architectural historians to wonder if Hammond Street was graded and lowered before the 1850s when many of the neighboring houses were built. 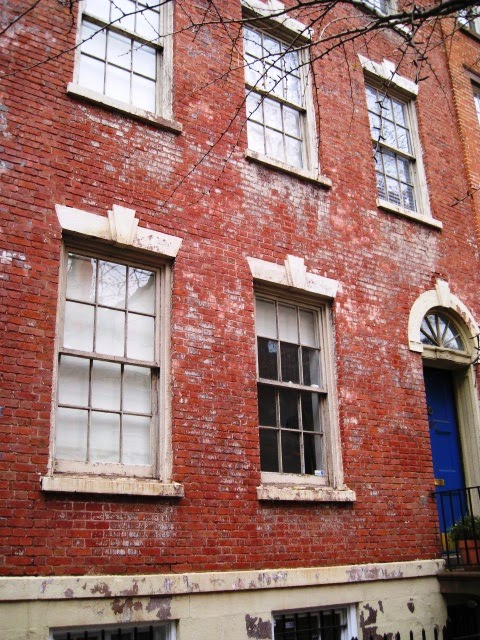 Hammond Street was renamed West 11th Street in 1869, still a quaint residential block of middle-class families.   By 1890 No. 282 was home to John W. Campbell, an auctioneer whose true passion was fishing.

In May 1890 the Sadler Bill was introduced in the State Senate.  The proposed law would fine any fisherman found using a net in Jamaica Bay $100.  Commercial net fishing had severely depleted the fish population in the bay.  The New York Times sided with the bill, saying on March 3 that at one time the bay was “one of the richest spots for sportsmen around New-York and Brooklyn.”   The newspaper added “In the olden days a sportsman was certain within a few hours to capture a fine mess of flounders, blackfish, weakfish, kingfish, bluefish, and Spanish mackerel.”

Faced with opposition from the commercial fishermen and some senators, Senator Stadler welcomed letters approving the bill.  John W. Campbell was more than happy to oblige.  He wrote “The waters of Jamaica Bay at one time were the surest ground within hailing distance of New-York for fishing, but for the past few years it has certainly become the most provoking place in this vicinity.”

Later that year Campbell had to put aside both fishing and auctioneering when, in September, he was appointed to the month-long Grand Jury.

Four years later John Campbell took a break from work on a Wednesday afternoon to do some fishing.  On June 20, 1894 he traveled up the Hudson River, just above Fort Washington.   He dropped his line off a railroad wall and before long felt a tug.  Twenty-five minutes of battle earned Campbell both a prize fish and local admiration.

The Evening World called him “the hero of the Hudson to-day, because of a seven-pound bass he caught yesterday, while old time fishermen were considering themselves lucky if they got fish of half the weight.  The piscatorial wonder was exactly twenty-six inches long, and it was landed with a fourteen-ounce rod and a small hook.”

The newspaper added, “the neighboring sharps say that only his skill in handling the big bass brought it to shore.”

Following Campbell, James A. Cavanagh made No. 282 his home.  A City employee, he was appointed Assistant Gardener for the Department of Parks in 1903.  By the time World War I had drawn to a close, Policeman McGuire and his wife, Annie, lived here.  Following McGuire’s death in 1921, Annie A. McGuire received $300 death benefits from the City; about $4,000 today.

Until the 1930s, the owners of No. 282 had modest backgrounds.  That changed when Evelyn Preston moved in.  Educated in private schools, she went on to earn her B.A. degree from Barnard College and a Master’s Degree from the University of Wisconsin.  Like many privileged former debutantes, she was a member of the Junior League.

But Evelyn was more interested in the plight of the underpaid working class than in society balls and teas.  In the mid 1920s she served as American treasurer of the British Miners Relief Committee in an attempt to help British miners and their families.

She was living here on November 21, 1935 when the League of Women Shoppers helped striking employees of the May’s Department store in Brooklyn.  In cooperation with the American Civil Liberties Union, the League picketed the Fulton Street store.    The following day a New York Times headline read “Junior League Member Also Arrested as Women Test Ruling by Police.”

Evelyn was arrested on charges of disorderly picketing.  She had violated the ruling prohibiting more than two pickets at a time.  Inspector Harry Lobdell told the judge that Evelyn, with three other women, “refused to leave the scene, their actions attracting a crowd of 700 and 800 persons.”   She was found guilty and fined $5.

It was no doubt through episodes like this that Evelyn met the founder of the ACLU, Roger Nash Baldwin.   A year later the pair was married.   They continued to live in the West 11th Street house.

Baldwin resigned from the American Civil Liberties Union in 1949; but went on to chair the International League for the Rights of Man.   The remarkable, high-purposed couple had one child, a daughter Helen.

On June 12, 1962 Evelyn Preston Baldwin lost her brief battle with cancer at the age of 64.  Her death prompted Eleanor Roosevelt to write “One cannot help regretting that such a useful person has been taken so early out of the stream of the world’s activities, and many, many people will extend their deep sympathy to Mr. Baldwin.”  The former First Lady said “together they have been an inspiration and a force in many of the movements that have been of value both in this country and abroad.”

Helen continued to live in the 11th Street house with her aging father; but 15 years later the same disease that had taken Evelyn claimed her.  According to Woody Klein, in his Liberties Lost: The Endangered Legacy of the ACLE, a heartbroken Roger Baldwin told Klein that he had an incurable illness, “but I was not to worry.”  When Klein asked what he could do, Baldwin answered “It is old age—and no doctor has a cure.”

He lived two more years, dying at the age of 97.  Under him some of the ACLU’s most important cases had been tried; including the Scopes evolution case, the murder trial of Sacco and Vanzetti, and the ban of James Joyce's Ulysses.

The picturesque Federal-style house where two of America’s most ardent supporters of human rights lived for more than half a century remains a single family home.   Because of Its relatively few owners, it survives as a rare example, inside and out, of Greenwich Village life 200 years ago.

non-credited photographs by the author
Posted by Tom Miller at 2:23 AM