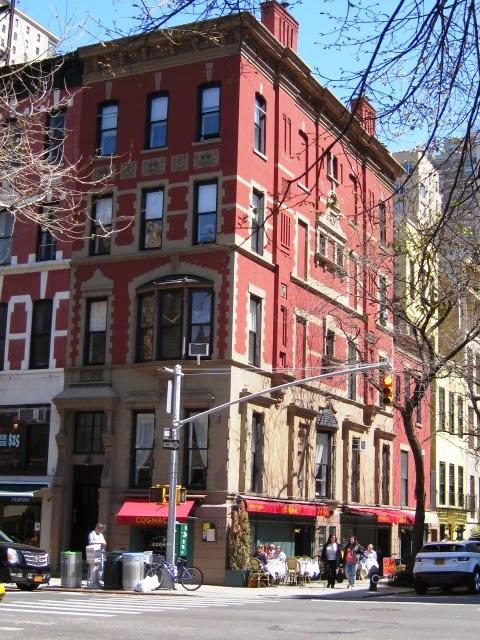 In the 1880s Jacob Schmitt, Henry Weller and Peter Schaeffler joined in the flurry of real estate development on the Upper East Side.  Operating as Jacob Schmitt & Co. they erected rows of high-end speculative houses along the blocks east of Fifth Avenue’s rising mansions.

In 1887 they acquired the properties stretching northward from No. 963, at the northeast corner of Lexington Avenue and 70th Street, to No. 971 Lexington Avenue.  Five small wooden houses with stables to the rear sat on the property.  They were quickly demolished and the architectural firm of Thom &Wilson was put to work designing a row of substantial homes to replace them.

Completed in 1888 No. 963, on the corner, was the most desirable of the row, owing to the additional sunlight from the long 70th Street exposure.  Thom & Wilson turned to the popular Queen Anne style for the five-story mansion.  The brownstone-clad basement and first floor served as a base for the three stories of red brick above.  The entrance sat above a high brownstone stoop and was protected by a hood supported by two short, twisted columns sitting on gently-curving supports with floral carving.  Stone quoins, carved panels and a shallow oriel marked the Lexington Avenue façade. 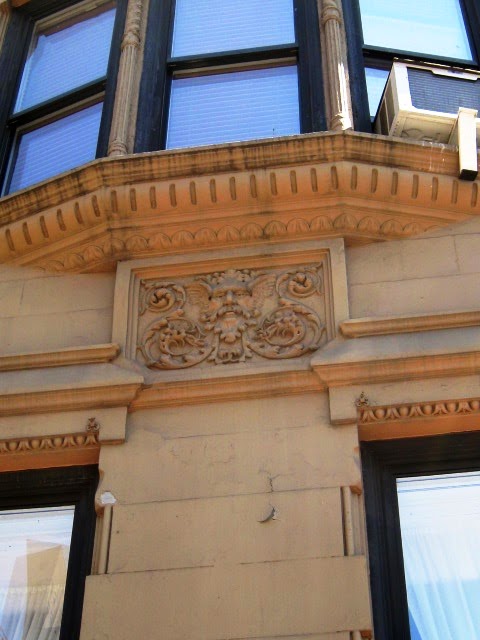 The architects were even more playful on the 70th Street side.  A charming bay window at the parlor level was flanked by three deeply-framed openings.  One blind opening, disguising the fireplace on the inside wall, contained a pretty if non-functional niche.   Above were whimsical openings and carvings and two long, paneled piers that disguised the chimneys. 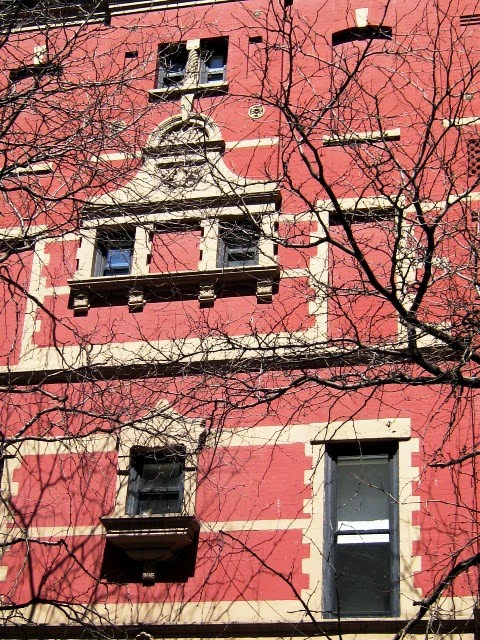 Five years after moving in, Mertens contracted architect J. Hauser to do $600 worth of interior alterations.  He would not enjoy his home improvements for many years.  On January 18, 1899 Robert E. Mertens died, followed by the death of his father just five months later.  Frederick Jr. was suddenly and unexpectedly the sole owner of the cigar firm.

In his will Mertens had left the bulk of his estate, including the company, to Frederick.  To Robert’s infant son, Robert E. Mertens, Jr., he left $25,000; apparently in the form of an interest in the family firm.  It was the beginning of an ugly family feud that would last for years.

Robert’s widow, Laura, asked for an accounting of the books in June 1899.  Frederick resisted.  Laura later complained to the courts that her brother-in-law “hated” her son; a circumstance that cause her concern.  Finally Frederick produced an accounting “claiming that the balance in his hands of the assets of the copartnership only amounted to the sum of $16.19.”  Laura was outraged and the resulting case of Mertens v. Mertens dragged on in the courts for years.

In the meantime the house at No. 963 Lexington Avenue was sold.  It was for a while home to real estate operator and contractor Moses A. Slone who was highly active in the area.  It was most likely Slone who offered spacious apartments in the mansion.  The house was one of dozens of properties included in a class action suit against the city when a 14-inch gas pipeline was laid below the sidewalk, disrupting the harmony of the families inside and causing damage to the structures.

On January 29, 1916 George Whitney Martin married Agnes W. Hutchinson.  The wealthy lawyer and his new bride moved into No. 963 that year; becoming a new entry in the Social Register.  Their stay here would not be long and by 1920 Charles Haase and his family had purchased and moved into the corner house.

Haase listed his profession as “grocer,” with his business located at No. 153 E. 70th Street.  The term is drastically misleading; bringing visions to modern minds of an apron-wearing owner of a small corner store.  Haase was highly successful and bought and sold buildings as a side line.  The well-to-do merchant was married to the former Anna Intemann and with them in the Lexington Avenue house were their two grown children, William and Anna Louise (who was known by her middle name).

In 1921 Louise married Philip H. Fischer in the Emanuel Lutheran Church on Lexington Avenue and 86th Street.  It would be another decade before her brother left the family house.

By the time Louise married, Lexington Avenue had drastically changed since 1888.  Most of the grand homes had been raised or converted for commercial purposes. A widening of Lexington Avenue in 1924 necessitated the removal of the brownstone stoop.  The entrance was moved to sidewalk level and the former doorway became a window.  Happily, Haase opted to retain the wonderful Queen Anne enframement.

On June 15, 1929, the engagement of William C. Haase to Edith M. Arnold of Plainfield, New Jersey was announced.  Anna and Charles lived on in the Lexington Avenue home until Charles’s death on November 27, 1933 at the age of 78.  His funeral, the last to be held in the once-grand home, was held the following Tuesday evening at 8:00.

In 1953 alterations were begun to transform the mansion into apartments, two per floor.  In 1955 a ground-level conversion resulted in store space and “light merchandise display and sales” on the former parlor floor.

The upscale boutique Helen Cole moved in.  The store prompted Kate Simon in her 1959 New York Places & Pleasures to comment, “Gentle gags and pretty trivia are the main occupation of the street-floor store.  This is the place to buy such small conversation pieces as mink-tailed dusters.”

From the late 1960s into the 1980s it was home to another glitzy shop, Boutiques de Noel; before being converted to a bank office in 1988.  Then, for years as the 20th century became the 21st, the space was Lumi Restaurant--known for its “French Riveria lifestyle and Mediterranean cuisine,” as described by one patron.  It was the setting for one scene in the film “Sex in the City.”

Today Frederick Merten’s mansion is mostly overlooked.  Some of the sculptural detail has been stripped; but on the whole it survives remarkably intact above the sidewalk level.  With a little imagination, the passerby can envision the Merten family in their 1890s garb, descending to a waiting carriage.