Ludwig Baumann arrived in New York City from Bohemia while still a very young man.  He got a job as a clerk in a grocery store; then established his own grocery store at 34th Street and Third Avenue.

1862 was a risky year to venture into an unknown endeavor.  The Civil War was only months old and the entire nation was in upheaval.  Nevertheless Baumann joined his brother, Albert, in the furniture business, creating Ludwig Baumann & Company.  Starting out in a small store, just 25 by 50 feet in area, the brothers managed to slowly prosper.

Around 1877 they made a dicey move.   Upscale furniture showrooms would establish themselves on 23rd Street at the northern fringe of the retail district known as the Ladies’ Mile.  But, prompted by their newly-hired junior partner, David Froehlich, Ludwig Baumann & Company procured properties at Nos. 512 and 514 Eighth Avenue in the block between 35th and 36th Streets.  The new store was far to the north of the shopping district.

In the 20th century the neighborhood would become home to Manhattan’s Garment Center.  But for now its streets were lined with brick or brownstone-fronted rowhouses.  The furniture dealer elbowed in among the houses, selling affordable furniture to middle-class families.

Froehlich was ambitious, aggressive, and a visionary.  The New-York Tribune would later call him “the leading spirit of the firm of Ludwig Baumann & Company.”  One-by-one the company absorbed the brownstone structures around it, within a decade, it had consumed the entire block front.  Froehlich’s ground-breaking business strategies were responsible for the extraordinary growth.

He devised the unheard of installment plan and instituted mail order for the firm.  On February 2, 1896, while the country was still reeling from the Financial Panic of 1893, the New-York Tribune remarked that the depression had little or no effect on Ludwig Baumann & Company.  “The credit for this uncommonly successful growth from small beginnings is largely due to the energy and keen business sense of David Froehlich, the junior member of the firm…With him originated the credit system upon which much of the firm’s business is done.  Under this system of payment in small installments many people furnish their homes comfortably and cosily, who without it would be unable to do so.”

The newspaper noted that many retail firms were laying off their staff.  But, “Ludwig Baumann & Co. has no such experience.  On the contrary, its sales show a marked increase, and instead of discharging numbers of salesmen, this large firm of household providers has been compelled to employ new ones.”

As a matter of fact, Ludwig Baumann & Company had, by now, turned the corner onto West 36th Street and a year earlier, filed plans for a modern, eight-story annex at Nos. 260 to 266 West 35th Street.  On November 23, 1895 the Real Estate Record & Builders’ Guide reported that architect Albert Wagner had designed the building, “Renaissance in treatment,” with a “Tiffany brick, iron and Indiana limestone front.”  The cost was projected at $175,000—a staggering $4.7 million by today’s measure.

As the building rose, Ludwig Baumann & Company offered the latest in Victorian furniture styles around the corner.  The New-York Tribune noted in February 1896, “Perhaps the most popular of the spring goods already arrived, however, are the cradles.  These are manufactured from various woods, are tastefully made in every particular, and are sold at the low price of 75 cents apiece.”

By the time the annex on West 35th Street was completed in November 1897 it had grown to 10 floors. In describing the “magnificent new structure” the New-York Tribune, on November 21, was less taken by the architecture than by the construction.  It mentioned the steel framing and steel beams supporting the floors; the waterproofed sub-basement that assured “a perfectly dry floor, excluding all dampness from the building; and the light and power plant in the basement that supplied electricity to not only the annex, but the entire row of buildings on Eighth Avenue.

Wagner’s façade was, nevertheless, worth note.  His tripartite design included a two-story base with large show windows separated by piers of rough-cut blocks.  The Tribune noted “The show-windows are brilliantly illuminated by a multitude of incandescent lamps imbedded in the ceiling, producing a gorgeous effect.”  The four-story middle section was comprised of three sets of angled bays nestled within soaring arches; while the brick-faced uppermost section was more delicate.  Here three sets of narrow three-story arches were grouped in threes and separated by simple brick piers.

The grand opening was held on November 20, 1897.  “Suffice it to say that everything conceivable in the household furnishing line will be found on its floors,” promised the New-York Tribune.   The old conglomeration of buildings on the Eight Avenue side (which were connected in the rear to the new building) would not display “housefurnishings,” like crockery, glass and lamps.  The new building was outfitted with showrooms for furniture.

“On one floor will be found bedroom suits of all descriptions, newest designs and most perfect finish.  Another floor contains some of the most beautiful furnishings in the house.  Another floor is completely given over to hall furniture of all varieties, while on still another is arranged a bewildering array of odd and fancy chairs.  Other floors are devoted to beds, desks and similar varied attractions, to dainty furnishings of all kinds of beds, and to a vast number of other marvels of household furniture in style and manufacture.  The carpet department on the second floor is fully stocked with the finest makes upon the market.”

Only one floor of the 36th Street structure was not filled with furniture.  “The firm’s private sanctum is on the eight floor of the new building,” remarked the newspaper.

On February 20, 1904 Ludwig Baumann left the Eighth Avenue store around 4:00 and traveled to his home on Long Island.  “While sitting in a chair he was suddenly seized with what appeared to be a fainting spell, and died before anything could be done for him,” reported The New York Times the following day.

The building was sold at auction among Ludwig Baumann’s other properties on December 12, 1912.   It was purchased by Max Marx for $302,000.  Although it no longer owned its building, the furniture firm remained as a tenant.  By now it was run by brothers Sidney and C. Ludwig Baumann. 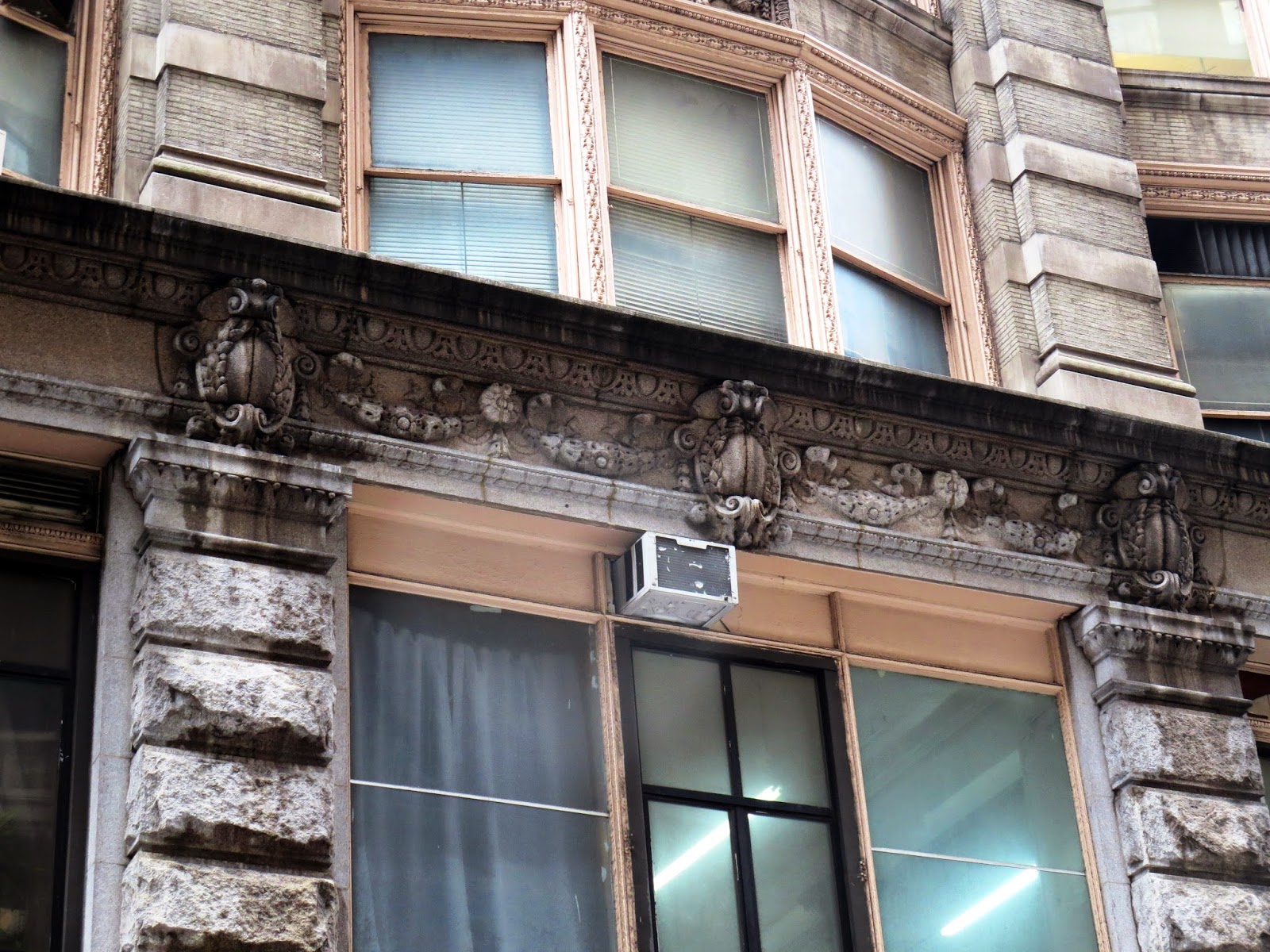 Ludwig Baumann & Company kept its employees happy in part by organizing The Google Club.  The social club’s members were all company associates and they met once a month in “Google Hall” in the 36th Street building.  On Thursday, October 2, 1919 Furniture World reported on a recent event.

On September 23 the club had hosted a “dance and entertainment” here in honor of senior co-workers.  “From the appearance of the program sent us this must have been a real show night.  The guests of honor were twenty-two in number, and on the list of entertainers we read of the ‘world’s greatest ventriloquist’ (too modest to let his name appear) the ‘operatic mocking bird’ rendered by Mrs. James, special dancers and recitations, all of which must have made the evening a most eventful and never to be forgotten occasion.”

In 1922 Ludwig Baumann & Company began construction of a new building on Eighth Avenue.  The structure, which would replace the long row of converted buildings, included the entire block front except the 36th Street corner.  As the building rose, another furniture manufacturer, Maurice Greenstein, leased Nos. 260-266 West 36th Street from the Baumann firm.  His 21-year lease came at a yearly rental of about $37,000 and The New York Times reported on July 29, 1922 that “He will alter the structure for general business uses.”

By now New York’s Garment District was rapidly engulfing the area.  Nearly all of the old houses had been torn down and replaced with looming loft buildings.  While Greenstein was in the furniture business, his tenants were noticeably from the garment industry; like Skonick Goldberg which took a full floor in 1926.

The former Baumann Building continued to house garment firms throughout the 20th century and into the 21st.  On January 31, 2000 there were eight garment shops in the building, described by The New York Times as employing “mostly immigrant workers.”  Tragedy struck the building that day.

Around 10:15 a.m. fire broke out in the basement where firefighters later found rubbish and piles of cloth.  As the thick smoke rose throughout the building panic erupted.  Firefighters rushed to rescue trapped workers on the upper floors, including a group huddled on the roof.  One worker, 41-year old Benvenito Hernandez, tried to escape the 10th floor just before 11:00 by tying one end of a bolt of red cloth to a windowsill then sliding down.  He lost his grip and fell to his death.

Two other victims were injured and taken to the hospital for treatment.   Employees of a leather manufacturer, H & R, were terrified when they rushed to a window to the fire escape, but, as reported by one woman, “it wasn’t there.”

On the 8th floor a woman in a dress manufacturing shop tied a bolt of white silk around a column, then around her waist.  She then climbed out the window and slid down to the roof of an adjacent building two floors below and hurried down its fire escape.  Her co-workers, however, saw Hernandez plunge to his death and opted to stay where they were. 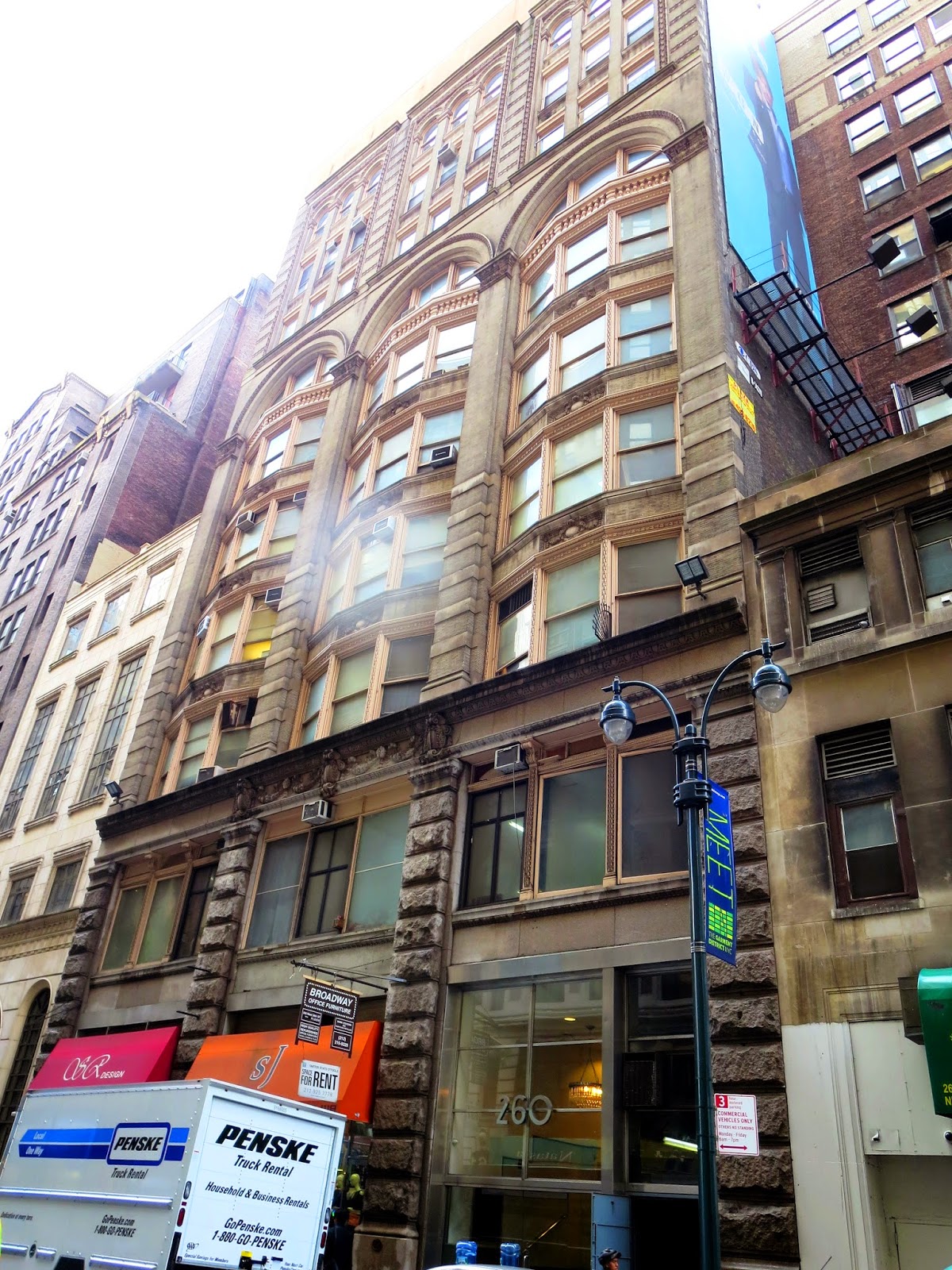 On a block of hulking loft buildings constructed for apparel firms, No. 260-266 West 36th Street is the last vestige of the once-gargantuan Ludwig Baumann & Company furniture complex, now long forgotten.

photos taken by the author
Posted by Tom Miller at 3:44 AM