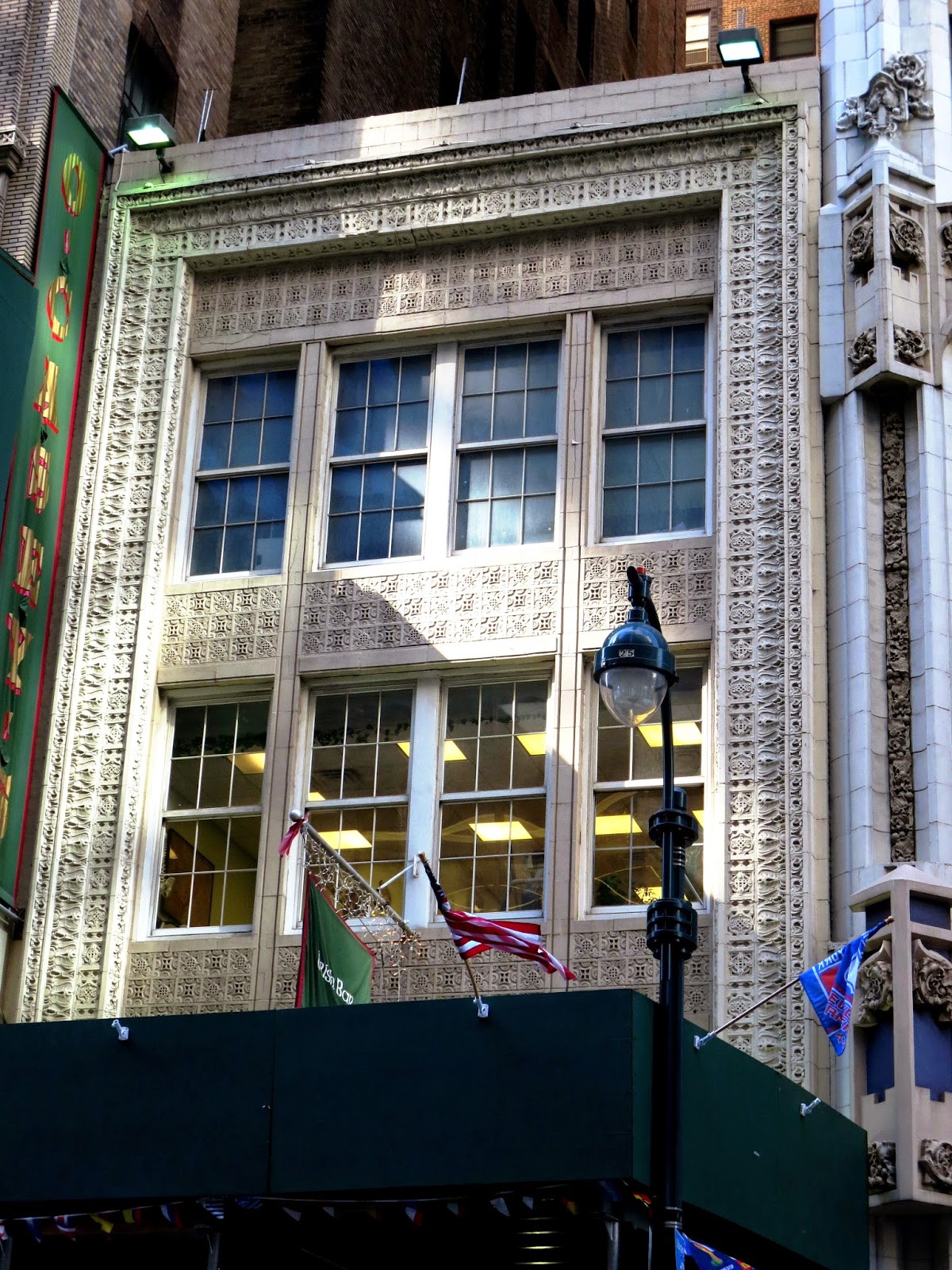 In 1899 the march of commerce up Fifth Avenue had changed much of the residential neighborhood around the massive Croton Reservoir between 40th and 42nd Streets.  Yet the houses on the east side of the Avenue and the blocks between Fifth and Madison Avenues were still, for the most part, private residences.

That year the popular and successful actress Maude Adams purchased the brownstone house at No. 22 East 41st Street, paying $35,000—a respectable $950,000 in today’s dollars.  Sitting above a high stone stoop, it was unusually narrow for the still-upscale neighborhood; only 12.6 feet wide.

The actress, whose full name was Maude Ewing Adams Kiskadden, had begun starring in plays by J. M. Barrie two years earlier, including The Little Minister.  Six years later she would introduce the playwright’s character Peter Pan to the New York stage.  It was her most memorable role and contributed to her being the highest paid performer of the day—earning over $1 million a year at one point.

Maude escaped from the public eye within her brownstone house.  The Theatre Magazine spoke of it in 1903.  “The few visitors who have been admitted to the narrow four-story English basement house which Miss Adams owns at No. 22 East Forty-first Street, describe it as an oasis of scholastic peace amid the roar of the busy metropolis.  Servants glide noiselessly about, speaking in the hushed tones of those accustomed to the enforced quiet of a sickroom, and as if watching jealously to guard a nervous and highly strung temperament from the jar of city turmoil.”

By 1904 Maude Adams’s tranquil block would face upheaval.  The magnificent New York Public Library had replaced the Croton Reservoir and developers were purchasing up the old houses.  On June 12, 1904 The New York Times remarked on the real estate fever.  It reported that the 1860 brownstone mansion at the northeast corner of Fifth Avenue and 41st Street, originally costing $14,000, had just sold for $40,000.  “The advancing values in the side streets just off Fifth Avenue is nowhere more apparent than at this point.  A striking comparison is afforded by 3 and 4 East Forty-first Street, almost directly opposite each other, and of very nearly the same size.  Michael Coleman bought No. 3 at auction in 1901 for $59,950.  No. 4 changed hands recently at $107,500.  No. 11 East Forty-first Street was sold in 1901 for $54,500.”

Not oblivious to the changes, when her next door neighbor, Mrs. Emma A. Streeter, put No. 24 on the market in January 1905, Maude Adams snapped it up.  “With the recent demand for new building sites on Fifth Avenue…real estate men say that Miss Adams’s purchase giving her control of a frontage of 25 feet is a shrewd speculative move,” said The New York Times on January 11.

The actress continued her peaceful life in No. 22 and waited.  Then, in 1912 the Holland Holding Company purchased Nos. 18 and 20 East 41st Street.  Within a year a striking terra cotta-clad Gothic Revival office building 20 stories tall rose on the site.  As it rose the firm’s advertisements boasted of “light on four sides.”

It was a selling point that could be obliterated if Maude Adams sold her property to a developer with a skyscraper in mind.  In a pro-active move to prevent that, the firm approached Adams.  On September 27, 1912 The New York Times announced that she leased Nos. 22 and 24 East 41st Street to the Holland Holding Company.  “The lease was arrange to give protection to the easterly light of a twenty-story office building, which the company is preparing to build on the adjoining fifty-foot plot,” it said.  The newspaper noted that Holland Holding “intends to replace the present structure[s] with a five-story business building.”

George & Edward Blum, the same architects responsible for the 20-story office building, would design the structure to replaced Maude Adams’s houses.  Both buildings were encased in terra cotta—but the similarities stopped there.

The architects surrounded the central portion of No. 22-24 in an oversized-picture frame.  The tiles here and in the window sprandrels reflected the popular Art Nouveau and Arts-and-Crafts styles of the period.  . 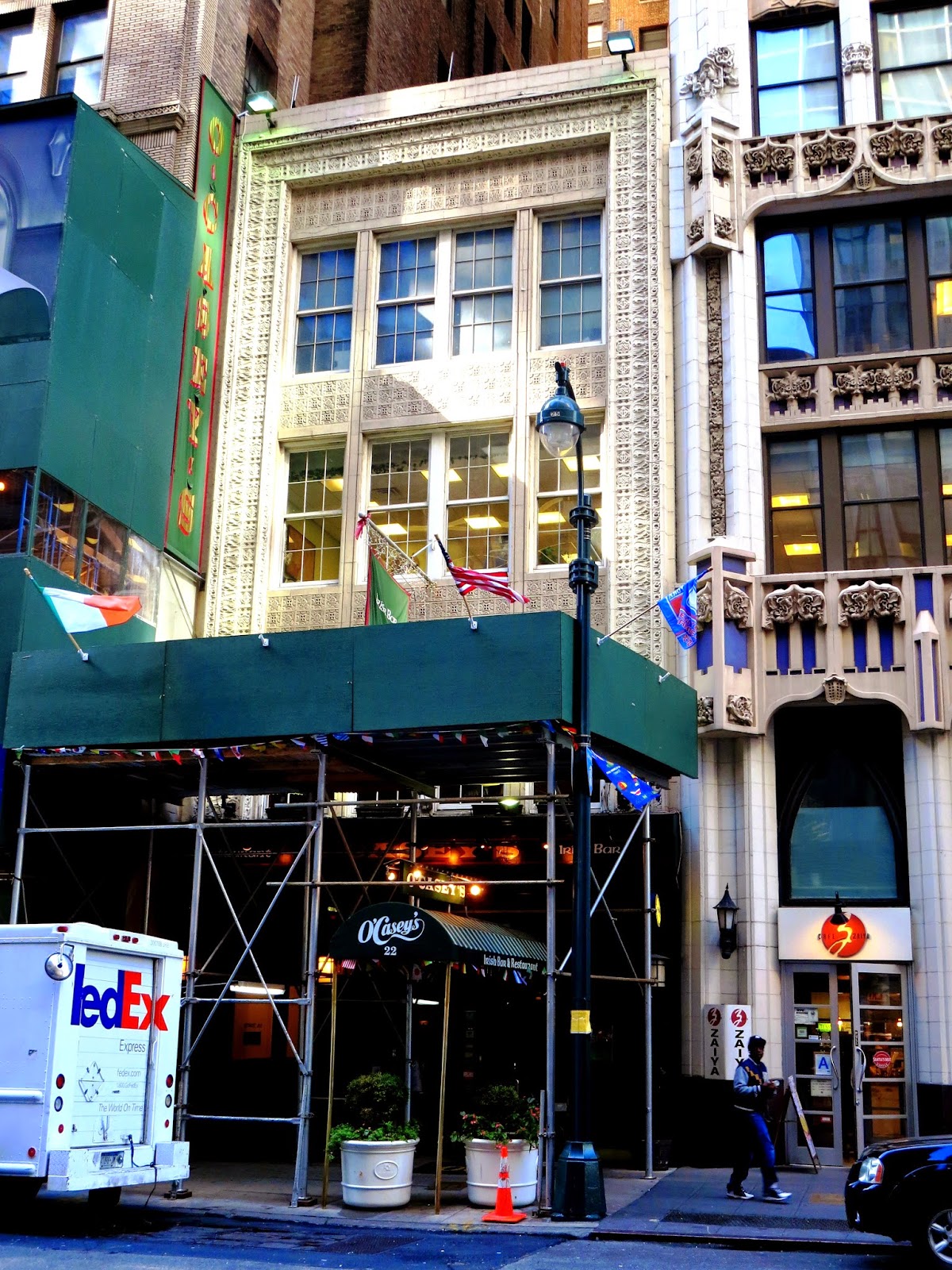 Each floor was flooded with sunlight from the expansive windows.  Like its big brother next door which announced “No Manufacturing Allowed,” the building would preserve the upscale tone of the street by leasing to salesrooms.

Tenants came quickly.  In 1914 N. Levin & Co., men’s custom tailors, signed a 10-year lease for the third floor.  Wallace Novelty took the top floor that same year.  Wallace would stay on for years, selling wares like its most well-known item, the electric lamp that “stands, hangs, clamps or sticks any place and at any angle you put it.”

The following year Wallace advertised for regional salesmen.  An ad in the Richmond, Virginia Times-Dispatch warned potential applicants “Haven’t time to talk to any but energetic hustlers.”

The building was fully-occupied in 1915 when the store and basement were rented by the Defiance Manufacturing Co., sellers of architects’ supplies and drawing materials.  The following year Maude Adams decided to liquidate the property.  On December 27, 1916 the New York Clipper announced that she had received $703,000 for the building.  The actress walked away with what would amount to about $14.5 million today.

The 1920s saw similar tenants in the building.  Pincus I. Rosenblum, “merchant tailor,” moved in in 1922 and the Standard Gas Equipment Corp. was here by 1926.  In 1922, however, there was a terrifying turn of events.

When the Holland Holding Corp. constructed the two buildings, they included a joint vault underground used for storage.  The Alliance Bleacheries Company stored concentrated acids and chemicals there.  Large carboys contained caustic substances like sulphuric and muriatic acids, and were kept in the vault behind closed doors.   Improperly sealed, the large bottles began seeping fumes.

On New Year’s Eve 1922 two porters noticed the choking fumes.  With no one in the building, the fumes had risen throughout the building.  The New York Times reported the following day, “Although the door of the vault was closed the fumes leaked through the cracks in the casing.  When the members of the rescue squad opened this door they found the air so heavily laden with the dense acrid fumes that even with their gas masks on they could not stay in the vault more than fifteen minutes.”

The men worked in relays, each man having his oxygen tank refilled at each rest period.  The “powerful acid fumes quickly exhausted the oxygen supply carried,” explained the newspaper.  As pedestrians crowded onto East 41st Street to witness the work, they were quickly repulsed by the pungent fumes.

The firemen and rescue squad worked for two hours attempting to air out the building; but found that the fumes merely spread again.  It was then that a large tank containing about 220 cubic feet of chlorine gas was discovered leaking in the vault.  In what today might be considered a rather environmentally unfriendly move, Deputy Fire Chief Joe Martin ordered that the tank be dumped into the East River.

Somewhat ironically, remembering Maude Adams, in 1970 H. A. Adams Associates was in the building.  The firm’s advertisements cautioned “Before you alter, buy or sell a brownstone, avoid the pitfalls…it’s smart to consult our experts.”

Two years before the Adams ad appeared in New York magazine, Patrick Cooney arrived in New York from Ireland.  His street level restaurant, O’Casey’s would leave its mark on the Blum brothers’ design.   O’Casey’s still operates behind a faux Irish pub front.  While its dark wooden façade is immensely preferable to the plastic signage and metal storefronts of delis and electronics shops; it is hard not to wish the delicate terra cotta structure had survived intact.