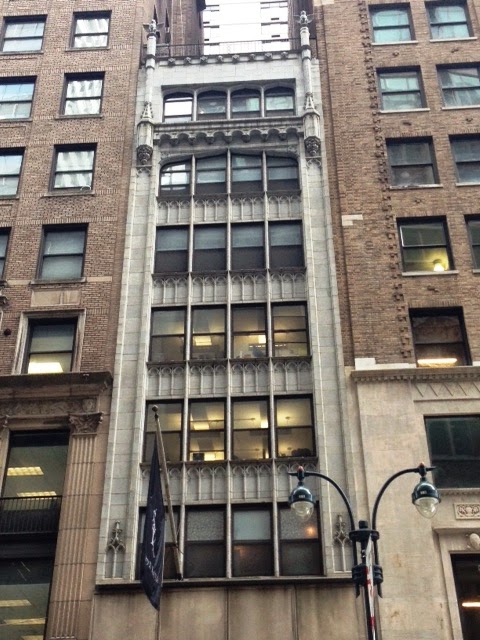 As World War I drew to a close the once-elegant residential block of East 41st Street between Fifth and Madison Avenues was nearly unrecognizable.  Commercial structures had replaced nearly all the old brownstones.  One that remained was the four-story house of Dr. Jared G. Baldwin, once the personal physician to millionaires like Jay Gould.

The widowed Dr. Baldwin had died in the house on April 11, 1913; but his heirs retained the property at No. 8 East 41st Street intact for several years.  But in December 1919 they too gave in to the advance of commerce.  On New Year’s Eve The Sun reported that the estate had sold the 20-foot wide residence to “an out of town investor” who “will erect a high class eight story business building, which he will lease for investment and which will be ready for occupancy in the near future.”

The “out-of-town investor” was Joseph McGarrity of Philadelphia who paid $120,000 for the house—a substantial $1.5 million in today’s dollars.   Born in Carrickmore, Ireland in 1874 McGarrity arrived in Philadelphia at the age of 16.  By now he had amassed a fortune and the anticipated New York City building would serve as a branch office of his insurance and bonding firm, as well as netting lucrative rental fees.

The frenzy of development at the time was staggering.  On July 4, 1920 The New York Times listed 67 buildings under construction in what it termed the “Times Square District.”  Among them was No. 8 East 41st Street, the cost of which it set at $120,000—exactly the amount McGarrity paid for the property.

Manhattan had seen the appearance of several Gothic-inspired skyscrapers within the past decade—the magnificent Woolworth Building, the World’s Trade Building, and steps away from No. 8, Blum & Blum’s handsome Nos. 18-20 East 41st Street.  Joseph McGarrity would add one more to the list.
Completed in 1921 the carved stone façade was not as exuberantly decorated as its predecessors; but pointed arches filled the window sprandrels and embellished the piers.   Slender colonnettes separating the openings continued unbroken, giving the eight-story building an enhanced sense of verticality.

Most striking, perched upon two stone drums flanking the parapet were spread-winged gargoyles, ready to swoop down onto pedestrians below. 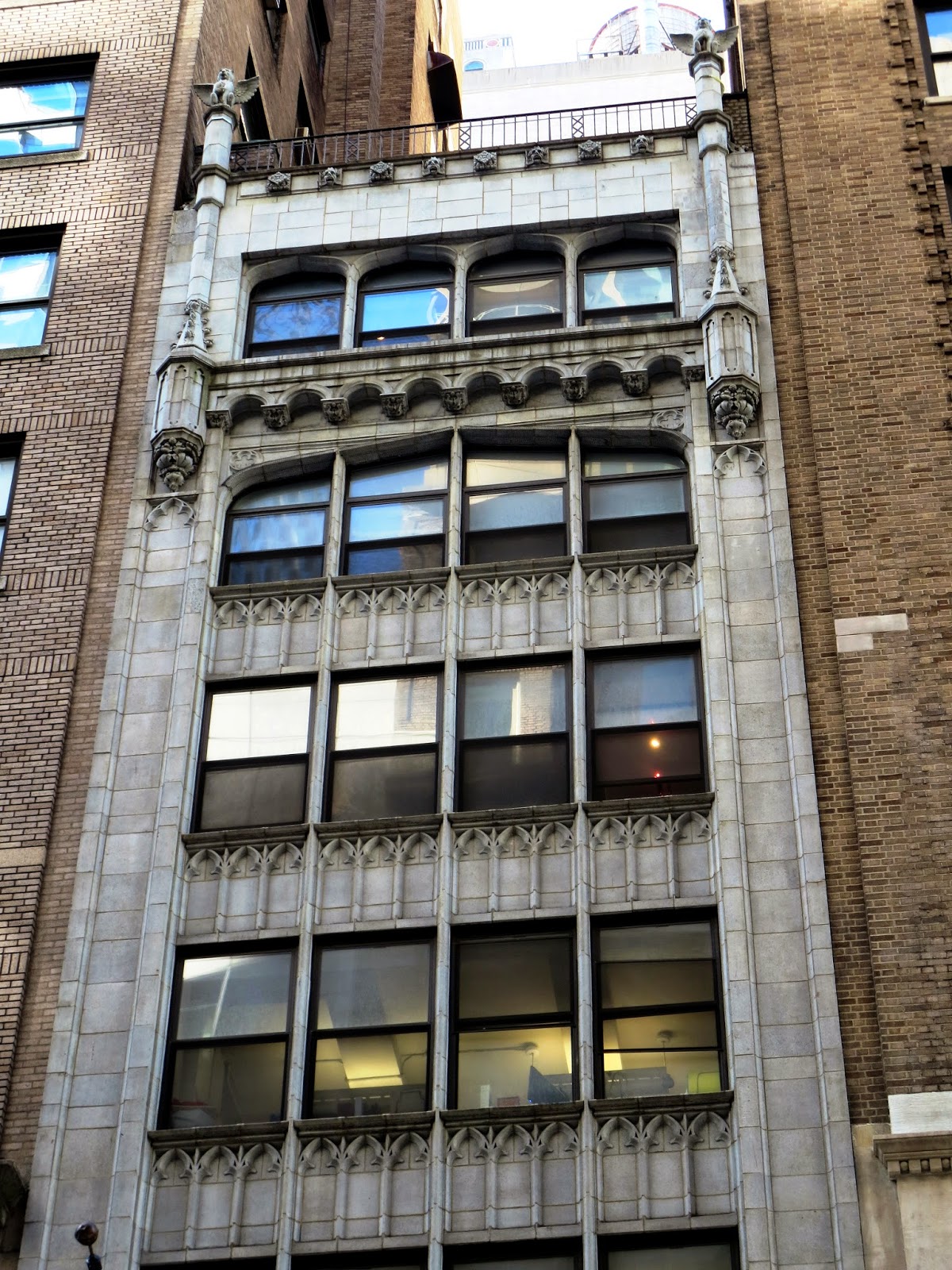 The building housed retail space in the first and second floors, with offices above.   As the structure neared completion, an advertisement touted its attractions.  "Distinctly different from the ordinary office building, Number Eight is nevertheless designed to meet every practical need of the busy man.  Constant elevator service that leads directly to your offices, wide windows that throw sunlight into the spacious sweep of airy rooms--all that modern architecture can do to combine utility with harmony of surroundings has been done by the builders of Number Eight."

McGarrity’s interest in business was overshadowed by his passion for his native country.  A poet as well, many of his works reflected the revolutionary movement in Ireland.   On August 13, 1922 he spoke at a mass memorial for murdered Irish nationalist Harry Boland at the Lexington Theater.  Thousands of Irish-born New Yorkers attended the meeting at which Joseph McGarrity was introduced as “the most unselfish Irishman in America.”

Therefore it is not surprising that when Countess Markievicz arrived in New York that year, the headquarters of the welcoming committee was at No. 8 East 41st Street.  The fiery countess had been elected to the British House of Commons but, as explained by The Evening World on May 16, “like all the Irish Sinn Fein members did not take her seat.  She entered instead the Irish Parliament, or Dail Eireann, becoming a member of the Irish Republican Cabinet as Minister of Labor.”

In 1916 she had participated in the Easter Week uprising, carrying a rifle on her shoulder, and was sentenced to death.   That sentence was commuted to “penal servitude for life.”  Now in May 1922 the committee at No. 8 East 41st Street organized a grand reception at Madison Square Garden.

“Prominent national, State, and city officials as well as national speakers and operatic singers will make the reception a very notable one,” promised The Evening World.  “Patriotic American societies and labor unions will take part in the demonstration.  Several bands will furnish music.”

Another socially- and politically-motivated group to establish its headquarters here was The National Urban League.   The pioneering organization sought to improve the lifestyles of black Americans and battle racial discrimination.

On May 17, 1926 The New York Times reported on the League’s successful push among cities to open industrial job opportunities to blacks.  “Traditionally our effort has been to equip negroes for rural-industrial life in the South,” it said.  “The recent shortage of unskilled and semi-skilled labor, and the consequent increase of urban industrial wages, have brought a vast migration into Northern commercial centres.  People brought up to country life have been plunged into the life of the city.  The race problem has been transferred from an environment in which it has been long familiar to an environment of strangers too often exasperated by economic competition.”

The newspaper admitted that the influx of black Americans into the city could be problematic.  “As yet New York and Brooklyn have been comparatively free from racial conflicts, but nowhere is the danger greater.”  It added regarding the League’s work, “Everywhere the effort is to create the understanding of negro character and capability which alone can allay the racial and economic conflict.”

As the 1920s drew to a close real estate-related offices were still in the building, like the United States Bond and Mortgage Corporation.  But the following decade would see a diversity of tenants.  In 1930 Prize Frocks, an apparel company, moved in; and architect Albert Korte’s offices were here by 1932.  The Academy of Display also established itself here.

The American Contest Company was operating a branch office from the building by 1936 when it promoted the Knights of Columbus Sweepstakes contest.  The shady operation relied on the fact that ticket purchasers would never know the winners.  The prize money ended up in the pockets of its principals.

The Knights of Columbus were supposed to receive 22.5 percent of the ticket proceeds; 25 percent should have financed the prize money; and the balance was slated for the promoters.  That wasn’t quite how it played out.

“Police charge that more than 700,000 sweepstakes tickets at $1 each had already been sent out,” reported The New York Times on March 3, 1936, the day after 12 of the executives were arrested.  “The prizes to be paid totaled $50,000, according to the rules of the contest.  An examination of the accounts, according to the police, disclosed less than $14,000 in cash credited to the company.”

The offices of the American Contest Company were available for lease shortly thereafter.

Joseph McGarrity died in on August 5, 1940 in Philadelphia.  His lifelong support of Irish nationalism resulted in a mass being held in Dublin’s St. Mary’s Pro-Cathedral.

The building at No. 8 East 41st Street was purchased by the Julliard Musical Foundation, which sold it in 1943 for around $110,000—less than half of McGarrity’s initial investment.   The United Hospital Fund owned it until July 25, 1956 and in 1960 it became the Mexican Consulate General.

In 1964 the Organization of American States voted to suspend air and sea communications between Communist-run Cuba and other Western Hemisphere nations and to halt all trade links with the island nation.  Twenty nations participated in the vote; however Mexico formally announced on July 16 that it would oppose all sanctions against Cuba.  The announcement came one day after Mexican students marched on the Mexican Consulate on 41st Street in an appeal for additional support for their “fight for freedom.”

Mexico’s continuance of trade with Cuba was not well-received by Cuban exiles.   On April 22, 1968 a bomb exploded outside No. 8 East 41st Street, damaging the consulate.   On the other hand, pro-communist and socialist groups applauded the country’s fidelity.  On October 9 that same year 200 youths of the International Assembly of Revolutionary Student Movements rallied outside the building

For years No. 8 East 41st Street would be caught between the two extremes.   On February 5, 1978 an anonymous caller told The Associated Press and United Press International that a bomb would explode at the Mexican Consulate.  Within minutes, at around 10:32 p.m., a stick of dynamite damaged the steel front door.  The anti-Communist Latin American Army claimed responsibility.

Then, on September 12, 1981 yet another bomb exploded, damaging a gate in front of the consulate.  The Times said “The New York bombing came several hours after a bomb explosion blew out windows and caused extensive damage to the Mexican Consulate in Miami.”  An anonymous caller told a Spanish-language radio station in Miami that the blasts were detonated by Omega 7, an anti-Castro organization.  “The F.B.I. has called the Omega 7 group the most dangerous terrorist organization in the United States,” said The Times.

Almost two decades later it was Mexican revolutionaries who protested on East 41st Street.  Upset over the Mexican Government’s handling of the December 22, 1997 massacre of 45 Indians in a village in southern Mexico, about 100 members of the Zapatista Army of National Liberation rallied here. 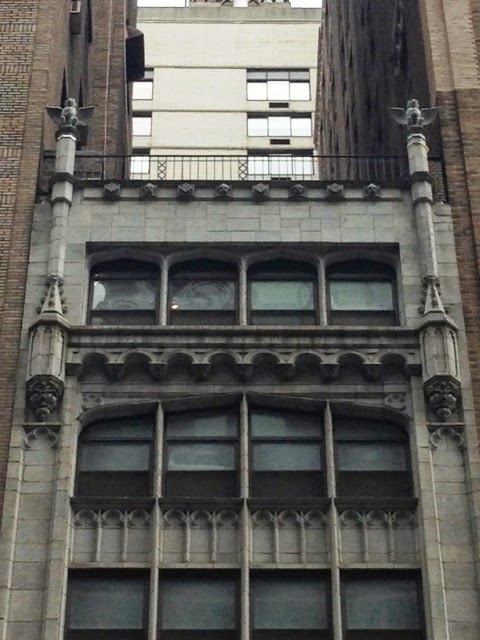 Today things are much quieter in the Gothic Revival office building.   Tenants range from expected offices to a spa that offers facials on the third floor.  Above it all two gruesome winged beasts still look down on 41st Street, ready to attack.