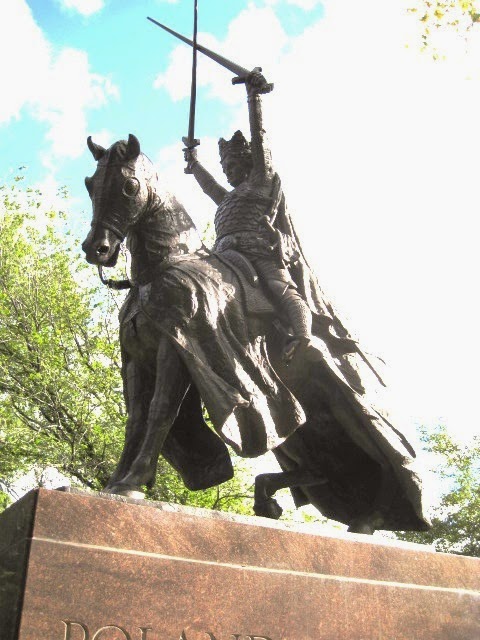 When nationalities world-wide began planning their pavilions for the New York World’s Fair of 1939, none could be prouder than Poland.  Only two decades earlier, in 1918, Poland had finally regained its independence after 123 years of partition and foreign rule.

Germany had done its best to stifle the Polish identify—outlawing the language, giving Polish-named towns German names, and teaching only German in the schools.  But as the 20th century dawned, a fervent nationalism arose among the Polish people.    Henryk Sienkiewicz dared to write Krzyzacy, a novel about the medieval roust of the Germans by the Poles in the 1410 battle of Grunwald led by King Wladyslaw Jagiello.

In 1910 internationally-renowned pianist and ardent nationalist Ignacy Paderewski erected a massive monument to Grunwald in the center of Krakow.  Atop the monument was a great bronze equestrian statue of the king.  Paderewski addressed the crowd at the unveiling, saying in part “We sincerely wish that every Pole and every Lithuanian…would look at this monument as a sign of a common past, a testimony of shared glory, and the herald of better times.”

The Polish Pavilion in New York’s Flushing Meadows would be dominated by an architecturally fascinating tower of gold.  The items on exhibition inside brought together the traditional and the modern; all a celebration of a reunited Poland.  Perhaps as a not-so-subtle reminder to the Nazis who were increasing in power, the entrance of the Pavilion was guarded by a large statue of King Jagiello.

Designed by sculptor Stanislaw Kazimierz Ostrowski, it was greatly inspired by the Krakow statue.  But unlike that sculpture, which depicted the king’s arms at his sides, Ostrowski’s Jagiello raised his arms above his head holding the two swords handed to him by his enemies, the Teutonic Knights of the Cross.  The crossed swords were symbolic not only of the defeat of the Germans; but of the king’s unification of Poland and Lithuania.

The Polish Pavilion opened on May 3, 1939—the anniversary of the signing of Poland’s first Constitution in 1791.  But although the country presented a joyous façade; while Polish girls danced in traditional dress and American tourists admired the exhibitions of art and culture, things were not going well at home.

A year earlier Germany had annexed Austria and now it invaded Czechoslovakia.  On September 1, 1939, four months after the World’s Fair Pavilion opened, the Germans invaded Poland.  The move incited Great Britain and France to declare war on Germany.  World War II had begun.

Mayor Fiorella La Guardia was infuriated at the German aggression and on October 11, 1939 he dedicated Pulaski Park in the Bronx, named in honor of Polish patriot Count Casimir Pulaski.  In his dedication he declared “no power on earth could destroy the spirit of the Polish people.”

In a further act of support, he asked Parks Commissioner Robert Moses to make the Polish Pavilion a permanent part of Flushing Meadow Park.  The New York Times on October 12, said “He termed the golden structure a replica of a medieval Polish tower, “the finest thing, architecturally, in the foreign area of the Fair—we all think so.”

The newspaper added “He has also asked, in the name of the city, for the equestrian statue of Polish King, Jagiello, which stands in front of the pavilion.  La Guardia called the sculpture “very fine.” 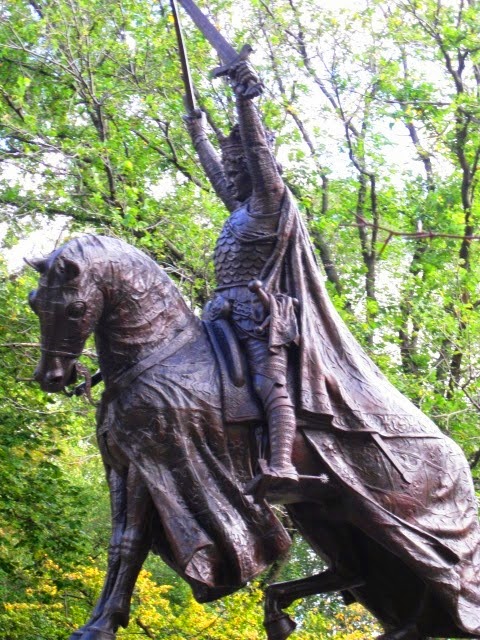 Meanwhile at home, with the Germans advancing on Krakow, the citizens attempted to hide the Grunwald Monument behind a barricade of wooden planks.  It was to no avail.  The German Army dismantled the 60-foot high monument and the statue to King Jagiello was melted into bullets.

Although the World’s Fair continued through 1940, the Polish Pavilion closed in 1939.  The United States would not enter the conflict for another year; but while tourists and New Yorkers strolled the boulevards of the Fair the carefree atmosphere was much muted—especially so when they passed the silent pavilions like that of Poland and of Czechoslovakia.

When the Fair closed Ostrowski’s defiant sculpture was presented to the city by the Polish Government.  It was removed from its base and placed in storage.  “A committee of Polish organizations, of which Mayor Fiorello H. La Guardia is honorary chairman, is raising $25,000 to prepare the site for the statue on the park lawn near the Metropolitan Museum of Art,” said Charles Grutzner, Jr. in The New York Times.

Finally, on June 2, 1945 ground was broken in Central, west of the obelisk near the Metropolitan Museum of Art.  The cornerstone was laid on June 17 and the unveiling took place on July 15.

Nearly a month before the first spade of sod was removed, The New York Times wrote “King Wladyslaw Jagiello is about to fare forth on his great bronze steed from the darkness of a city warehouse and take his place in the sunlight of Central Park in time for the 535th anniversary of the battle of Grunewald [sic].  It was there that this Polish king routed the Teutonic Knights in one of the most crushing pre-Eisenhower defeats ever met by German military might.”

That the statue of a victorious King Jagiello over the Germans would be erected almost simultaneously with the end of German occupation of Poland did not go unnoticed.  Despite the unspeakable atrocities endured by the Poles under German occupation—including the mass murder of millions—La Guardia’s declaration to “no power on earth could destroy the spirit of the Polish people” seemed to have borne out.

The Times quoted historian Jan Dlugosz who wrote following the Grunwald defeat, that the Germans’ own handcuffs and leg irons were used against them.  “God justly punished their pride, for the Poles bound them hand and foot with these very same fetters and irons.”

The monument to King Jagiello in Central Park became a symbol of Polish nationalist, determination and pride.  Banks of flowers, for decades, would appear on Polish holidays and patriotic anniversaries.  In 1986, forty years after its unveiling, it was cleaned and restored by the Parks Commission.

It happened just in time.  In 1975 the city was shouldering $3.3 billion in debt and was on the verge of bankruptcy.  Now, while the city was climbing out of the fiscal hole, it was still struggling.  In 1987 there were only seven or eight workers to care for the 800 statues and 700 public monuments.  They took home a combined salary of $175,000 a year.

The New York Times, on March 9, 1987, lamented the condition of statues and monuments.  “Acid rain, automobile fumes and factory emissions have eaten away at bronze and turned marble sponge-like.  Vandals have torn off heads and arms, pausing only to cover granite pedestals with spray paint.  Repairs exceed city budget.”

Twenty monuments needed immediate repair—at an estimated cost of $1.3 million.  Among them was the statue of King Jagiello.  The City was realistic.  There was no way it could pay for the manpower and the cost of restoring the works of art.  So it initiated the Adopt-a-Monument project; the sold program nationwide that sought private money to care for and restore individual monuments.

The King Jagiello statue was one of the first two to be adopted.  The American Conservation Association provided $30,000 to its restoration that year.  As a result, the heroic statue with an amazing history survives in glorious condition today.