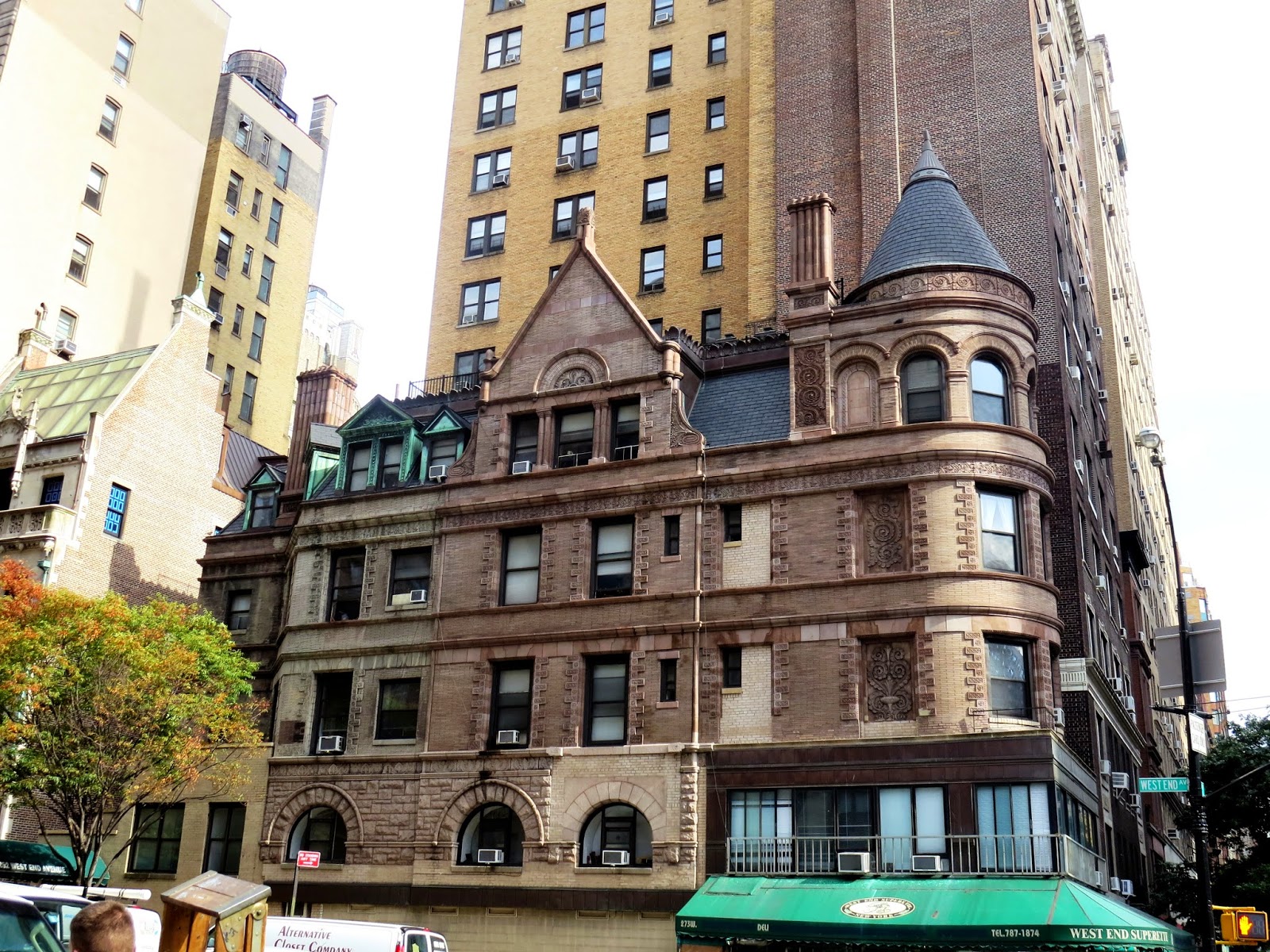 Aldrich was born into wealth.  One of four children, he was the son of Herman D. and Elizabeth Aldrich.  His father was a principal in McCurdy, Aldrich & Spencer, deemed by The Insurance Times to be “the leading house in the American dry goods commission business.”  In an astonishing coincidence, Herman and his best friend and business partner Robert H. McCurdy died on the same day, from the same disorder: valvular disease of the heart.

By the time Spencer Aldrich and his wife chose the 50-foot long building plot at the northeast corner of West 72nd Street and West End Avenue the neighborhood had already begun filling with stylish homes.  But none would outdo the Adrich mansion.

Gilbert Schellenger sat down in 1895 to design the house—a Romanesque fantasy of turrets, gables, arches and chimneys that commanded the corner.  Four stories high, it was completed in 1897 and stretched nearly three times the width of a conventional townhouse.  Schellenger used a variety of materials to create a masterwork.  A turn-of-the-century sketch shows the entrance—a deep, arched portico set on clustered pillars above a side-turned stoop—squarely centered within the West End Avenue elevation.  Nevertheless, the house took the address of No. 271 West 72nd Street.

Aldrich was not only a major developer, but was for a time the President of the Real Estate Exchange.  He and his wife, the former Harriette Holley Dall, had five children, four of which were girls.  As could be expected, entertainments in the house would center around the feminine members of the household as they reached coming-out age.  And it would not be long.

In the meantime, however, the Aldrich family spent their summers at their Long Island estate near Babylon on the Great South Bay.

Two years after moving into their new mansion, it filled with the chatter of wealthy women as Harriette gave the first of debutante receptions on December 16, 1899.  This was for daughter Louise.   Her sisters would follow close behind.  Mary Austen Aldrich was feted in the house in 1902 and Helen Hudson Aldrich’s and Maude Holley Aldrich's debutante receptions were in 1905.

Six months later the house was abuzz again as plans were prepared for Louise Dall Aldrich’s marriage to William Meissner.  The ceremony took place in the Church of All Angels on June 16, 1906 with the bride’s uncle, Rev. J. Nevitt Steele, officiating.  The New-York Tribune noted that the bride’s down was “trimmed with old point d’Alencon that had been used on the gowns of three other brides in her family.”

Ushering in church that day was Spencer Wyman Aldrich, Jr.  Spencer would graduate from the University of Virginia the following year.  He would find himself ushering in the Church of All Angels once again, on October 28, 1909, as sister Helen married the impressively-named Talcott Hunt Clarke.

Brooklyn Heights had its own high society circles.  A few days prior to Helen’s marriage, on October 24, 1909, the New-York Tribune assumed “It is likely that a number of people from the Heights will cross the river on Thursday next for the wedding…of Miss Helen Hudson Aldrich and Talcott Hunt Clarke of Buffalo.”  Following the ceremony Brooklynites and New Yorkers alike filed into the 72nd Street mansion for what The Sun called “a large reception.”

In 1911 the family apparently traveled, for the house was leased at $7,000 for the year—about $170,000 today.  In January that year the mansion would be the scene of a terrifying incident.  On January 20 The New York Times reported “In the morning crowd traveling down town from the Bronx in a subway express yesterday there was a young negro, who resented the jostling to which all the straphangers were subjected.  He finally drew a knife, and before he fought his way to the open [doors] at Seventy-second street, had slashed two of his fellow passengers, a girl and a man.”

The incident started when the swaying car caused one, then another, of the passengers to bump against Vernon Graham who was standing by the subway car’s doors.  When Mary McAuley, a stenographer, was thrown against him, he made a remark that, according to The Times, “was so offensive,” that another passenger Daniel McGowan, “ordered him to hold his tongue.”

When the train stopped at the 96th Street station, Mary McAuley needed to get off in order to transfer to the local.  But to do so she had to pass Graham.  She saw him pull a knife.

“Look out!” He has a knife in his hand,” she cried to McGowen.  It infuriated the already upset Graham who, according to the girl, tried to strike her with the knife.  When she dodged the blow, he struck again.  “She staggered a little and then fainted, her body falling through the doorway to the station platform,” said The Times.

Daniel McGowan leaped to the platform behind the attacker and attempted to wrestle him to submission.  He was met with stabs to the neck and hands.  Vernon Graham had a good lead on the infuriated pack that chased him from the subway; and although badly injured, McGowan led the crowd.

When the fugitive reached the corner of West 72nd Street and West End Avenue, he saw the grill-work door to the basement of the Aldrich mansion opened and ducked in.  When McGowan and Policeman Murphy who had joined in the chase arrived, they found “a frightened servant, who had retreated to the corner of the kitchen.”  The servant pointed to a locked pantry door.  “They broke it down and found their quarry, back to the wall and still showing fight,” said the newspaper.  “Murphy closed upon him and the chase was over.” 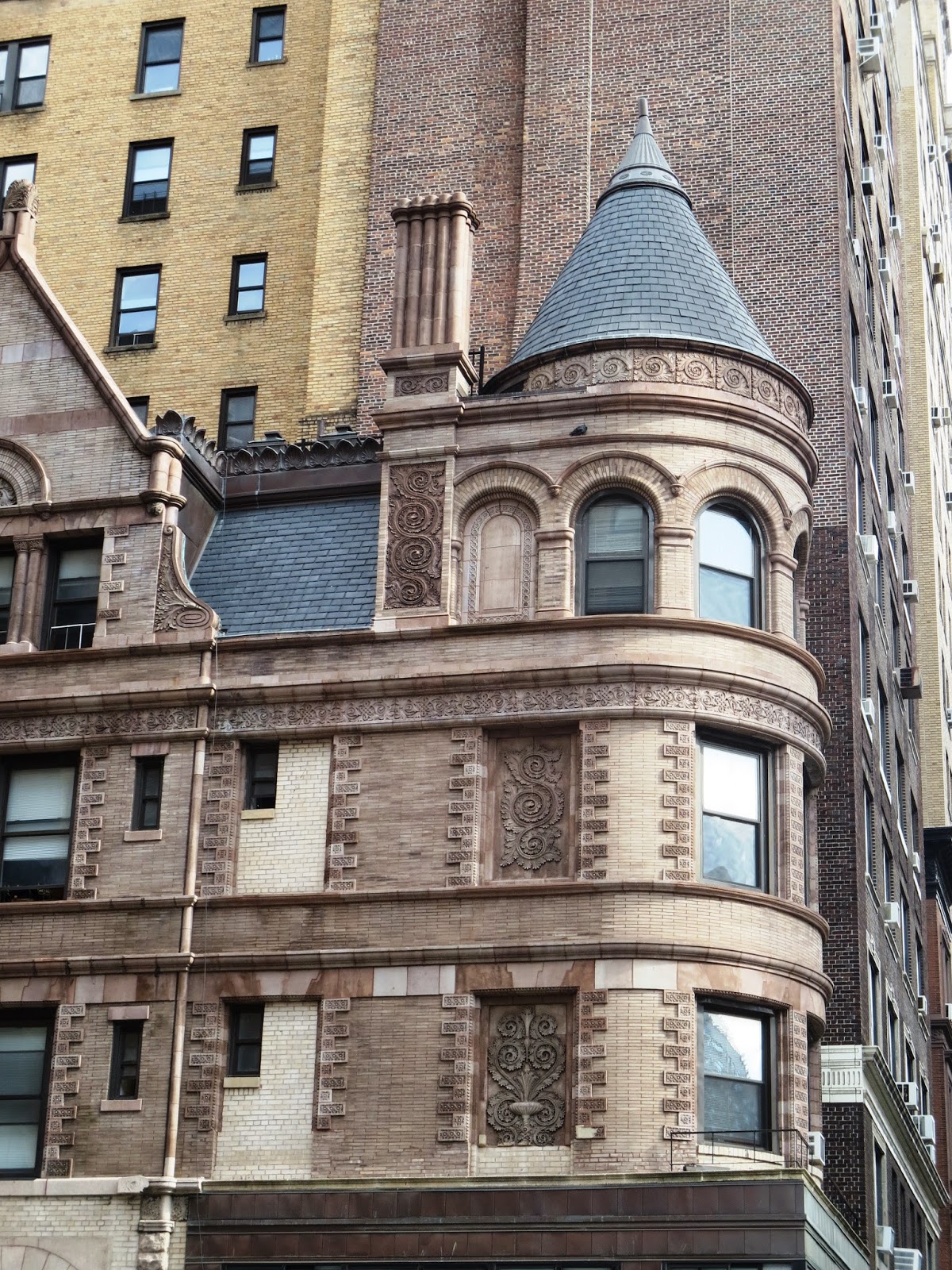 Things returned to normal at No. 271 West 72nd Street.  That year Spencer Wyman Aldrich, Jr. became engaged to Imogen Gaither.  The following year, with nearly all of their children married and gone, the Aldriches moved to No. 29 West 50th Street.

The 72nd Street mansion briefly was home to J. Clark Read, administrator of Camp Champlain, a summer camp for boys, and secretary of the Berkley School.  But by 1916 the William Carleton Shanley family lived here.

Shanley and his wife, the former Mary Ledwith, had three children; William Carleton Bayley Shanley, Jr., Bernard and Grace.  A tragic accident occurred for the family on December 12, 1916 when the Shanley limousine, driven by chauffeur Edward Simpson, struck and knocked down Mrs. Charlotte Ryan on West 32nd Street.

Mrs. Ryan initially brushed off the accident, saying she was not injured and had no time to go to the hospital because she was Christmas shopping.  Finally she was convinced to go to the French Hospital.  “There it was learned that she had been injured internally.  She died soon after she got there,” reported The Sun the following day.

In the Shanley’s household staff in 1919 was James C. Boyd.  At the time the homes of Manhattan’s wealthiest citizens had been plagued by a thief who counted among his victims Harold S. Vanderbilt and Mrs O. H. P. Belmont.  Before Boyd left the Shanley’s employ in January, they too had been robbed.

On April 7, 1920 police nabbed James Boyd.   He gained entrance into the mansions by obtaining a job—he was Mrs. Belmont’s butler—then leaving after a few months.  When he was arrested he admitted to having taken $160 worth of Mrs. Shanley’s jewelry.

At the time of the robbery William Junior was serving in the United States Army as a Second Lieutenant.  During the war he had been deployed overseas.  He had graduated from Princeton in 1916, just prior to the U.S. entrance into the war; and would later graduate from Columbia Law School.

While he was fighting abroad, Mollie Kelly, daughter of the wealthy sugar mogul Hugh Kelly, helped the war efforts by working in the canteen division of the Mayor’s Committee of Women on National Defense.  In 1922 William had rejoined the civilian sector and was practicing law.  On November 24 that year he and Mollie Kelly announced their engagement.  The Evening World headline announced “Betrothal Announced of Popular Girl Here to Wm. C. Shanley Jr.”

The last of debutante entertainments in the 72nd Street mansion occurred on December 17, 1927.  The all-female reception for Helen Lois Shanley was followed by a theater party to which eligible young men were invited.

That year alterations were completed which resulted in stores at ground level, a doctor’s office and stores on the floor above, and four apartments on the upper stories.  The imposing entrance stoop on West End Avenue was chopped off and the rough-cut stone façade was broken through for retail space.

In the first decade of the 21st century the old mansion got a bit of a facelift when Architecture Restoration Conservation oversaw a restoration of sorts.  The corner turret was rebuilt, a new slate roof was installed and the stone and brickwork were cleaned and repointed.

The completed project, which highlights the remains of Shellenger’s wonderful design, makes the vandalism to the lower floors seem even more barbaric.  Fortunately, however, New Yorkers need only look up to savor a glimpse of what was.