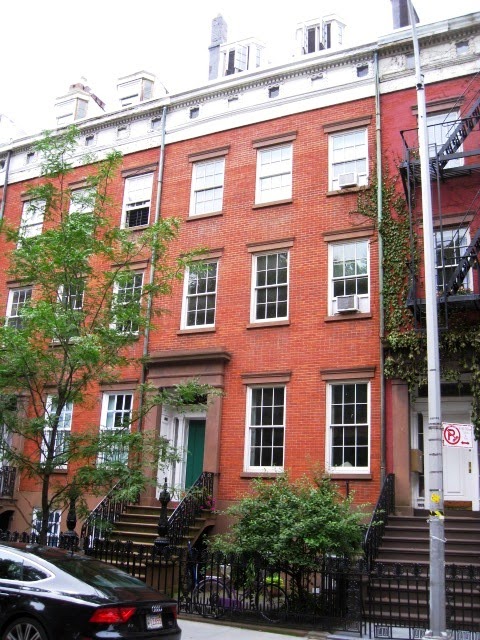 He traveled to New York City to start his fortune.  By the time the 23-year old married in 1815 his dry goods business on Pearl Street was a success.  He moved to Greenwich Village, where he eventually became acquainted with Clement Clarke Moore and real estate operator James N. Wells.

As Greenwich Village developed and became more populous, Don Alonzo Cushman recognized Chelsea as an up-and-coming neighborhood.  By the early 1830s the newly-laid streets of Chelsea saw brick homes going up; designed in accordance with the restrictive covenants Moore included in the residential deeds to ensure a higher class of homes.

In 1833 Cushman bought property on Ninth Avenue between 20th and 21st Streets and constructed a commodious home for his family within a spacious garden.   After helping found the Greenwich Savings Bank, he gave up his dry goods business altogether and focused on real estate and banking.  In 1839 he began his most memorable project—the string of elegant Greek Revival homes on West 20th Street between Ninth and Tenth Avenues that would become known as Cushman Row.

The homes, stretching from No. 406 to 418, were completed in 1840.  The high-end Greek Revival residences offered potential owners the latest and best in the architectural style.  Sitting ten feet back from the sidewalk, they were protected by heavy and exquisite iron fences crowned with rows of palmettes.  The entrances to the English basement were concealed beneath the broad brownstone stoops, which in turn were distinguished not only by rich iron railings, but wonderful candelabrum newels. 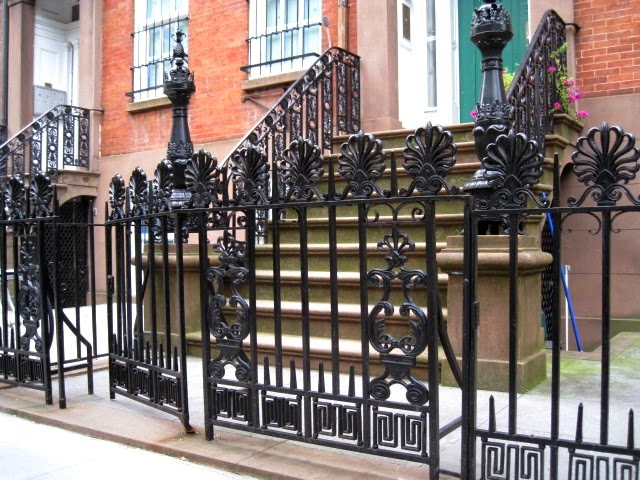 The entrances were set deeply within the brownstone enframements.  Three stories of red-brown brick rose to a wide fascia board pierced with small attic windows encircled by carved wreaths.  Within, the rooms would be outfitted in costly woods, ornamental plasterwork and elegant marble mantels.

Among the identical homes was No. 416 which, like its neighbors, was home to highly respectable citizens throughout the 19th century.  In the 1870s it was home to Professor James Weir Mason.   The teacher graduated from the College of the City of New York in 1855 and taught in private schools for 13 years before giving up education to work in the insurance business.   Then, in 1879, he returned to teaching when he was appointed Professor of Pure Mathematics at City College.

By the early 1890s Francis E. Laimbeer owned No. 416.  Highly involved in local politics, the Republican was an Assemblyman in the 27th District when he ran for re-election in 1896.  Although Laimbeer was religious and highly-respected—he sat on the Board of Deacons of the Collegiate Reformed Protestant Dutch Church—his apparently less-than-benevolent views on race caused him trouble.

On September 7, 1896 The New York Times reported that “The colored Republican County Committee has refused to indorse Assemblyman Francis E. Laimbeer…for re-election because of some offensive remarks about the colored race which Mr. Laimbeer made several months ago.”  Although the committee unanimously supported all other Republican candidates, “Chairman Butler and an overwhelming majority declared they would not vote for Mr. Laimbeer under any circumstances.”

Laimbeer would not stay on much longer in the 20th Street house.  It quickly became home to Jonathan Little Hyde.  A prosperous jeweler, he had married Carriet C. Dart on February 28, 1849 in the Brick Presbyterian Church.  The couple had three sons and two daughters. Now a widower, the elderly man was the last surviving member of the jewelry importing firm of John E. Hyde & Sons which was founded by his father, John E. Hyde, in 1825.  Following his father’s death Jonathan and his brothers, John Joseph and William H. Hyde, had became partners.

The company was best known for the Jules Jurgensen watches it imported and sold.  After John Hyde died in 1890, followed by William’s retirement, Jonathan Little Hyde continued the business alone.  At the age of 72, Hyde suffered his first stroke.   Nevertheless, he worked on until February 1, 1896 when his health forced him to close the business.

By now most of the spacious homes in Chelsea were being converted to rooming houses or were being replaced by modern apartment buildings.  In 1904 aspiring artist Natalie A. Johnson was living at No. 416 West 20th Street when she won first prize for her design of a book cover in a competition held by the International Studio.

In 1938 the house was converted to one apartment per floor.  Amazingly, the house survived throughout the 20th century with little interior alteration.  The Greek Revival moldings and pilasters of the parlor level were preserved, as were the original parquet floors, marble mantels and original interior window shutters.  Outside, the priceless ironwork is intact, including the now-rare candelabrum newels.

In 2012 the house was offered for sale for the first time in four decades.  The astounding condition of the interiors prompted the realtor to suggest it was “an ideal candidate for re-conversion to single-family status.”


No. 416 remains sympathetically divided into apartments (the original hallways and interior doors are all intact); a wonderful relic of Chelsea’s early days of development.