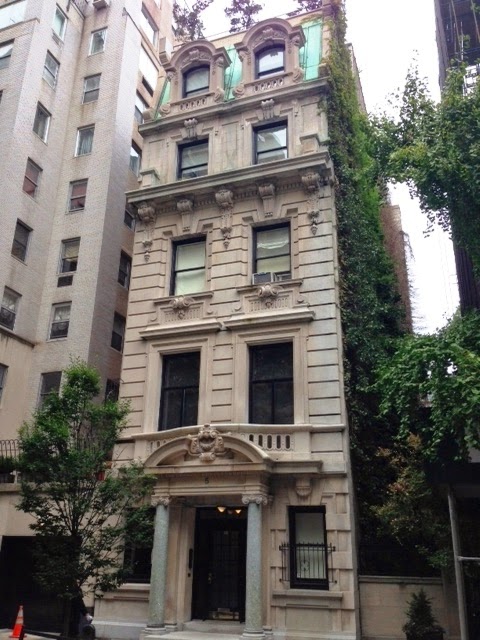 In 1865 the Bonesteel family’s house at No. 5 East 73rd Street was in turmoil.  Just across Fifth Avenue Central Park was under construction, shattering the quiet home life that living this far north should have provided.  The blasts used to clear the land no doubt splintered Victorian nerves within the household.

Wilhelmina Bonesteel was teaching in the Primary Department of School No. 53 on 79th Street, between Second and Third Avenues when, on December 5, 1865, her brother Teunis, was drafted into the army.

By the late 1880s when Manhattan’s wealthy had already begun inching northward along the park, the Bonesteel house was one of the oldest in the neighborhood.  It seems that 1889 was a difficult one for many homeowners and on December 21 that year the Real Estate Record & Builders’ Guide reported “Still another foreclosure sale was No. 5 East 73rd Street…on which over $50,000 is due and which was disposed of to A. S. Rosenbaum at $51,250.”  The winning bid for the dated home would amount to about $1.25 million today.

Albert S. Rosenbaum was a former tobacco merchant who had retired and gone into the hotel business.  He was proprietor of the Hotel Albert, at No. 42 East 11th Street; and the Hotel Stephen just steps away at No. 48 East 11th Street.  The 58-year old had arrived in America from Cassel, Germany when he was 18 years old.

It was 1849, the Gold Rush was at its peak, and the enterprising young man saw opportunity.  Rather than settling on New York’s Lower East Side with other German immigrants, he set off for California.  The New York Times later said “by dint of great business tact, shrewdness, and industry [he] rapidly accumulated money, which he invested advantageously in San Francisco real estate.”

Armed with a handsome fortune, Rosenbaum returned to New York to run his tobacco company.  He became a Director of the Manhattan Loan and Trust Company, along with other financial institutions, and was highly involved in surface railroad companies like the Third Avenue Surface Railroad Company.

Rosenbaum and his wife had a son and four grown daughters.  One of them would live here only about a year.  On November 12, 1891 at 6:30 in the evening “over a hundred friends of Mr. and Mrs. Albert S. Rosenbaum assembled in the large reception room at Delmonico’s, Fifth Avenue and Twenty-sixth Street, to witness the marriage of their daughter, Annie Sophie Rosenbaum, to Solomon Kalten Lichtenstein, a young lawyer of this city,” said The Times.  The large assemblage testified to Rosenbaum’s social position and included names like McCreery, Schwab, and Rothschild.

The wealthy hotel man would not enjoy the 73rd Street house for many years.  At 3:30 on the morning of February 18, 1894 he suffered a fatal heart attack.  In reporting his death, The New York Times mentioned “Mr. Rosenbaum was sixty-three years old, and was one of the wealthiest Hebrews in this country.”

By the turn of the century things along the 73rd Street block were changing.  As Fifth Avenue filled with lavish mansions, the old-fashioned brownstones on the side streets were rapidly being razed or remodeled into high-end residences.  In 1901 powerful publisher Joseph Pulitzer demolished five rowhouses abutting the Rosenbaum house and began construction on his massive McKim, Mead & White-designed palazzo.  The architects included a service alley between the properties.  It would be as advantageous to the Rosenbaums as to Pulitzer.

That same year, most likely prompted by Pulitzer’s improvements next door, the Rosenbaum family razed No. 5.  Architects Buchman & Fox prepared plans for a magnificent five-story Beaux Arts mansion.  What the house lacked in width (at just 21 feet), it made up for in elegant design.  As a result of Pulitzer’s service alley, the house was a rare free-standing structure.

Each level of the French-inspired design vied amiably for attention.  The grand portico with its dramatic arched pediment was supported by blue-toned marble columns.  Directly above a stone balcony bowed out from the façade.  Above the three floors of rusticated stone ornate brackets supported a projecting cornice, and a copper clad mansard capped it all.  The Real Estate Record & Builders’ Guide reported the cost at $35,000—about $930,000 today.

The house was completed in January 1902.  The family had constructed the mansion as an investment rather than a home and quickly leased it to Ailene Hostetter “for a term of years.”

Ailene’s husband, Theodore, was being treated in a sanitarium on Park Avenue.  A pharmaceutical manufacturer, Hostetter augmented to his millions by gambling.  The Los Angeles Herald said he had “the reputation of being the boldest plunger New York has ever seen.”

Originally from Pittsburg, “Tod” Hostetter was described by another gambler, David Johnson.  He said Hostetter had “all kinds of money and the instincts of a sport.  He would bet on anything from a dog fight to a boiler explosion, and he bet them as high as the cat’s back.”

Ailene Hostetter settled into No. 5 East 73rd Street as her husband’s condition deteriorated.  He died in August that year, leaving his widow to deal with claims of over $1 million in gambling debts.

By 1906 the mansion was occupied by a much less controversial family.  On April 12, 1904 the 26-year old William Armistead Moale Burden, son of I. Townsend Burden, was married in St. Thomas’s Church.  The prominence and wealth of his family would have made the Fifth Avenue wedding an important event; but his choice of brides made it socially momentous.  Florence Vanderbilt Twombly was the daughter of the fabulously wealthy Hamilton McKay Twombly and the granddaughter of William H. Vanderbilt.

“Both the bride and bridegroom were exceeding popular in the younger set in society,” said The New York Times.  Unlike some society matches, the marriage of the athletic Burden (he was Captain of the Varsity football team at Harvard) and Florence Twombly was based on true romance.  After Ailene Hostetter moved out of No. 5, the newlyweds moved in.

Tragedy struck the young couple when, on Tuesday, February 6, 1905 their new-born daughter died of pneumonia.  Following the appropriate period of mourning, they resumed their social lives and on November 14, 1906 The New York Times reported that they had returned to the East 73rd Street mansion for the winter season.

On the afternoon of December 9, 1908 Florence gave birth to a baby boy in the house.  It was a welcomed spark of joy in the Burdens’ tragic lives.  For about a year William Burden had suffered a disease which, according to The New York Times, “baffles physicians in diagnosing.”  On October 1, 1907 he retired from the Stock Exchange firm of James D. Smith & Co. citing his health as the reason.

When Burden suffered his first attack, which resulted in high fever, he traveled to Europe to recuperate.  While there he had a relapse.  William and Florence returned to New York where the attacks recurred repeatedly.

Only weeks after the baby’s birth, his condition took “an alarming form and forced him to keep to his bed,” reported The Times.  His frustrated doctors tried unsuccessfully to diagnose the problem.  “The only name they can give it is chronic recurrent fever,” said the newspaper.  “They have not yet been able to ascertain its cause or to devise a treatment for it.”  At 11:00 in the morning on February 2, 1909 the 31-year old millionaire died in the 73rd Street mansion.

Florence and her two sons, William and Shirley, continued to live in the mansion.  Three years later on July 6, 1912 the Real Estate Record & Builders’ Guide mentioned that the A. S. Rosenbaum estate had renewed the lease “to Mrs. F. A. V. Twombly” for “a term of years.”

In June 1920 Florence purchased the magnificent Jonathan Thorne mansion at No. 1028 Fifth Avenue at the corner of 84th Street, putting the title in William Jr's name.  After nearly two decades of renting the Rosenbaum house, the Burdens moved on.

Taking their place was the family of William Whalen.  Whalen was nearly killed the following year when he was traveling in a two-car train on the Second Avenue El.  A steel subway train had been parked overnight at the Fisk Avenue Station in Queens and had just been switched to the main track as rush hour approached.   The motorman of Whalen’s wooden train, George Kessler, did not see the tail lights of the motionless subway train and crashed into it.  “The first car of the moving train was demolished,” reported the New-York Tribune on November 10, 1921.  Kessler was in that car and was listed among “the most severely injured.”

The Rosenbaum Estate would retain ownership of the mansion until October 1930 when it was sold to W. Barton Baldwin for $135,000 (nearly $1.8 million today).  Baldwin had been living at No. 33 East 65th Street.  The purchase came just in time for daughter Lelia’s wedding reception.

The wedding of Lelia and Francis H. Tomes took place in St. Bartholomew’s Church on June 16, 1931.  The New York Times said the church “was a garden of Spring flowers.”  The newspaper described the elaborate floral decorations saying “pink rambler roses trailing over trellises concealed the side walls, and the windows were banked with the bright blossoms.  White Spring flowers were massed in the chancel against a background of lofty ferns, and clusters of white stock, snapdragons, sweet peas and feathery asparagus ferns had been fastened to the ends of alternate pews along the main aisle, making a white and green floral lane through which the bridal party passed”

Following the ceremony the reception was held in the 73rd Street house where “an orchestra of Markels played.”

It would all play out again five years later when, on March 23, 1936, the Baldwins announced daughter Ruth’s engagement to George C. Sharp.  The couple was married on April 30 in St. James Church.

The New York Times lamented on July 2, 1940 “Another fine old East Side residence shortly will become an apartment house as the result of the sale of the five-story building at 5 East Seventy-third Street, once the home of W. Barton Baldwin.”  The newspaper reported that the property was valued at $102,000 and “contains an automatic elevator and other special appointments.”

Within the year the conversion was completed; resulting in a doctor’s office on the first floor, two apartments on floors two through five, and a penthouse, unseen from the street.  To modernize the building, a glass block entrance was added.  Happily, sometime after 1981, it was removed.

Buchman & Fox’s eye-catching mansion survives nearly intact.  It remains a high-end multi-family residence and still holds its own with the palatial Pulitzer mansion next door.

photo by the author