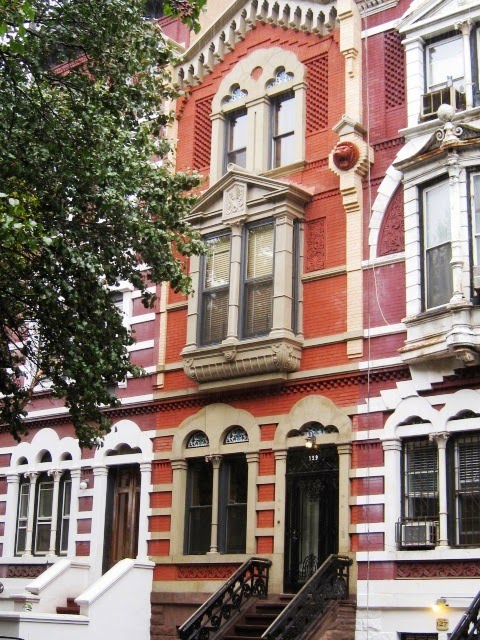 In 1881, when Rafael Guastavino arrived in New York City from Spain, the great thrust of development on Manhattan’s Upper West Side was underway.   An accomplished architect trained in Barcelona, he was fascinated with the Catalan vault—a curved structure constructed or veneered with brick or tile that created not only a tremendously strong ceiling, but the floor above it.

As Guastavino perfected his process—what would famously become known as the Guastavino Arch—he accepted architectural commissions.   In 1885, the same year he patented his “Tile Arch System,” he started work on a row of townhouses stretching from No. 121 through 131 West 78th Street for developer Bernard S. Levy.

The architect’s Spanish background shone through and the resulting row, completed in 1886, was a delight of Moorish Revival confections.   Each of the homes flowed harmoniously from one to the other; yet a second glance revealed that no two houses were exactly alike.  Guastavino used red brick and  sand-colored stone on the three upper stories which sat on a rough-cut brownstone base.  Moorish motifs (a snarling Syrian-style lion separated each building at the third floor) blended with Romanesque and a touch of Queen Anne to create the up-to-the-minute residential designs.

Among the completed row was No. 129.  Like those of its neighbors, its stoop cascaded directly from the doorway towards the sidewalk; then spilled slightly to one side for visual interest.  For this façade Guastavino used intricate terra cotta panels, stained glass, creative brickwork and an eye-catching second floor stone oriel.

The handsome house was home to Randolph Reinhart in the 1890s; then after the turn of the century was owned by Charles E. Harrington and his wife, Josephine.    Harrington had long been a newspaperman, first in Chicago and then, almost directly after his marriage to Chicago debutante Josephine Glassbrook, in New York.

In 1881 he was still working for The Chicago Times as a correspondent.  He received a message from his managing editor shortly after midnight on April 13 that read “Sail on the first steamer.  Get the Revised Testament.  If you succeed, a fortune is yours.”  The “Revised Testament” was the revised edition of the Bible’s New Testament which had been worked on for years by scholars and theologians.  Every newspaper in the Western world desperately wanted to break the story.

On December 29, 1907 the Washington D. C. Evening Star recalled “The whole world was anxious to know what radical changes had been made in the sacred book; and a Chicago newspaper determined to get the book in advance of regular publication and issue it in its regular daily edition as the biggest piece of news of the day.”

The English and American publications of the “English Revised Version” were to hit the bookstores simultaneously on May 12.  Harrington had little time to cross the Atlantic, somehow get his hands on a pre-publication copy, and get back to the United States.   After a nearly-miraculous series of events, Harrington beat out all the other journalists, providing his newspaper the revised text and the international scoop.

It was perhaps this outstanding journalistic achievement that landed Harrington his job as correspondent with The New York Times.   He rose to Assistant City Editor, and by 1910 was Exchange Editor on The Wall Street Journal.

That was the year that Josephine Glassbrook Harrington died in the house in February after a long illness.  The title of the residence was in her name, as was common practice.  It passed to a relative “K. Glassbrook.”

Charles E. Huntington soon moved to No. 109 West 90th Street.  The 78th Street house was leased by the Glassbrooks.  In 1912 the well-to-do family of James B. Shaw was living here.  On October 20 that year The New York Times mentioned that Mrs. Shaw “will return from a long Western trip in about a fortnight.”

When Grace Gruber leased the house “for a term of years” it was still in the possession of K. Glassbrook.  It appears that, although no serious internal alterations were made, there would soon be several renters in the house simultaneously.  “Madame Florin” listed the house as her address in 1918, and in 1922 Dr. Duncan Mactavish Fuller was living here when attorney C. W. Zaring rented an “apartment suite.”

That would all change by 1928 when Madame Giuseppe Gaudenzi purchased the house.  Born Edith Watkins in 1881 in St. Thomas, Ontario, she sang opera internationally.   In the first decade of the 20th century she was married.  No longer performing, she was a well-known operatic coach.  On December 18, 1910 The Buffalo Courier noted “Signor Giuseppe Gaudenzi, the young Italian tenor, who has been spending the summer in Buffalo coaching with his teacher, Mrs. Edith Watkins Griswold…has been enthusiastically received in the South.”   A Florida newspaper agreed, and mentioned Edith as well.  “Everywhere this artist has met with the most flattering reception which is of course a gratification to his teacher, Mrs. Griswold, whose pupil he was in Italy during her residence there of several years.”

Perhaps not surprisingly, the tenor with what The Buffalo Courier said was a “handsome presence” and his operatic coach were married on June 10, 1916.  What became of Mr. Griswold is unclear.

Referring to herself now as Mme. Giuseppe Gaudenzi, Edith ensconced herself in No. 129 West 78th Street.  Her Italian tenor husband came and went.  On July 29, 1928 an upstate newspaper mentioned “Mme. Gaudenzi has a beautiful studio in New York and is a noted vocal teacher and operatic coach.  Mr. Gaudenzi divides his time between America and his home in Bologna, Italy, and comes from a distinguished family in the latter city.” 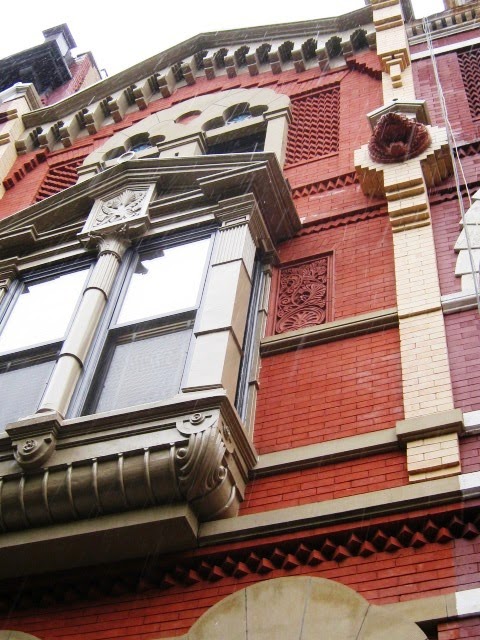 It would seem that Gaudenzi eventually did not return.  The census of 1938-1940 shows Edith living here—and using her maiden name—along with her sister-in-law, Edith Simpson Dunn (Marie V. Watkins had married Thomas Warren Dunn in 1925), and a maid.  There were also two male roomers in the house.

In 1983 the house was converted to apartments—one spacious triplex and a single apartment on the top floor.  It would be a short-lived conversion.  In 2004 it was returned to a single family home.

Ten years later a meticulous restoration of the façade was initiated which included the removal of the grisly coating of red and white paint that had defiled the entire row.  The painstaking reclamation of the original appearance earned the Lucy G. Moses Preservation Award in 2015.

The exceptional restoration of the exterior was not matched inside.  Although the renovation was upscale, the 21st century obsession with “an open floor plan” resulted in the loss of original walls and many details.  The house and its five neighbors, however, represent rare examples of Rafael Guastivino designs.  After 1885 he focused on his Guastavino Fireproof Construction Company; working with preeminent architects on projects and rarely acting as principal architect.