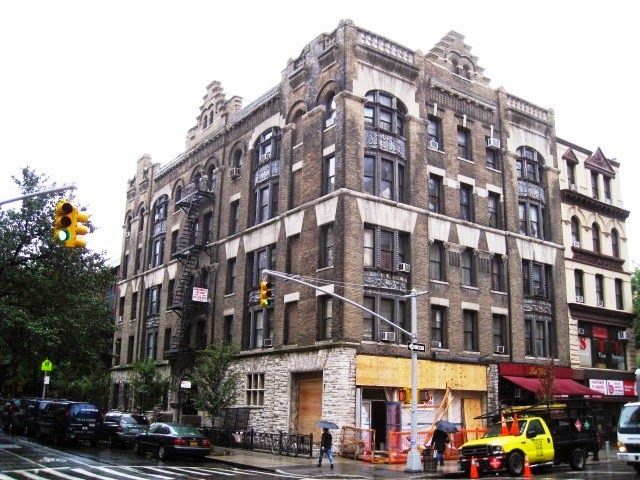 In 1890 not only was the Upper West Side developing as sewers were laid and mass transit extended to the area; but apartment living was becoming more widely acceptable.  On the east side of Central Park apartment buildings would be known by their addresses; on the west side they more often took names, like The Dakota, The Wyoming and The Chatsworth.

Construction began that year on one more:  The Orchid.  Owner-developer Lorton Horton was busy in the area, having erected a multi-use structure containing a store, apartments and stables two years earlier at No. 371 Amsterdam Avenue.  He chose architect Frank A. Rooke for the project.

Now Horton sought the architect’s talents again.  He owned the adjoining property encompassing Nos. 373 and 375 Amsterdam Avenue and rounding the corner to No. 170 West 78th Street.  For this site Higgs & Rooke would produce a massive Romanesque Revival block of tan brick, stone and pressed metal.  Stores lined the street level along Amsterdam Avenue and a grand entrance for the “French flats” faced 78th Street.

New York architects, especially on the Upper West Side, were taking note of the city’s Dutch roots at the time.  Flemish Revival churches, schools and houses cropped up as quaint reminders of Manhattan’s beginnings.  Higgs & Rooke gave their nod to the movement with centered Dutch stepped gables on both elevations.

The pressed metal bay windows, too, strayed from the Romanesque with swags and other floral motifs and unusual hefty beaded engaged columns at the third floor.  But the residential entranceway within the rough-cut stone base, was purely medieval.  The deep-set, sturdy stone arch sat on clustered columns.  Exquisite snarled carving filled the spandrels and the street number was beautifully incised into the keystone.

The Orchid filled with respectable middle and upper-middle class families, like the widowed Mrs. George Wesley Spencer and her daughter, Evelyn Grace; Edwin H. Hammer who was the New York agent for Keasbey & Mattison, makers of Bromo-Caffeine; and Dr. Robert W. Eastman; all of whom were among the initial residents.

On October 27, 1891 Mrs. Spencer’s apartment was the scene of Evelyn’s wedding reception.  Earlier that day she had married William Henry Blaine, a relative of the Secretary of State, James G. Blaine.  The Sun noted that “Miss Spencer wore at her throat a blazing diamond pendant, a present from the bridegroom.”

As privileged children of society neared their teen years they would need to learn to dance.  Debutante balls and cotillions were in their futures; and every well-heeled member of society would be expected to perform adequately at society’s many dinner dances each season.  On November 26, 1893 The New York Times mentioned “As the season lengthens the dancing classes increase in number, much to the satisfaction of the juvenile members of society.”  The newspaper noted that “Miss Lillian Barry of 170 West Seventy-eighth Street has arranged to give a series of dances in Hodgson’s Assembly Rooms” on Fifth Avenue to groom youngsters in dancing.

Along with Dr. Eastman, several other physicians made The Orchid their home, such as Dr. Charles Good, and Dr. Philip R. Moale who was in the building by 1895.

Dr. Good was still in the building at the turn of the century and after midnight on May 20, 1900 he received a frantic knock on his door.  Mrs. Ellen Wessels lived nearby at No. 2183 Broadway and pleaded for his help.  Her brother-in-law, Dr. Charles Smith Collins, who also lived at the Broadway address, was in trouble.

The Times explained “Dr. Collins had been ill for several weeks and had been in the habit of taking drugs to ease his pain and induce sleep.”  Around 10:30 that evening he had taken “a quantity of chloral.”  Mrs. Collins awoke to find her husband struggling to breathe and in distress.  The New-York Tribune reported “Dr. Good made every effort to counteract the effect of the poison, but failed to do so, and Dr. Collins died at 3:20 o’clock.”

Another doctor, named Swift, lived in The Orchid in 1903.  It was in his apartment on Friday November 27 that year that The Pathological Society held its meeting, according to The National Journal of Homoeopathic Medicine.

The attraction of the building to physicians was pointed out in its advertisements.  Most apartments contained seven rooms “all light” and rented in 1905 from $720 to $840 a year—approximately $1500 to $1800 a month in today’s dollars.  But the first floor apartments were larger, having two additional rooms.  An advertisement in The Sun on September 22, 1905 noted that these apartments were “extra large, suitable for dentist or doctor; rent $1,000.” 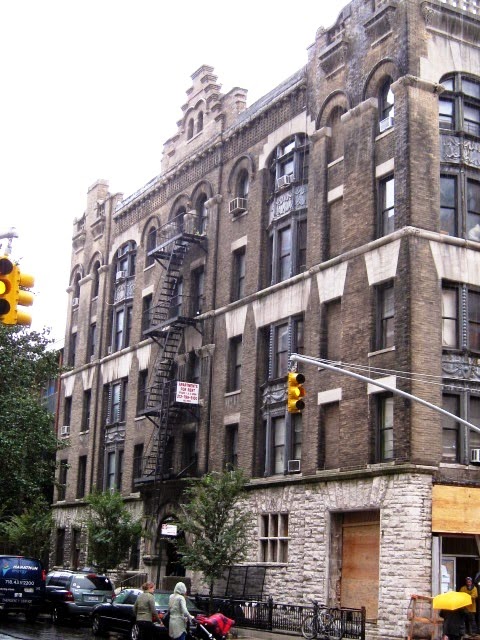 Among the tenants not involved in the medical field was stock broker Thomas M. Daly whose offices were at No. 32 Pine Street.  In 1903 the couple engaged the services of two servant girls, Annie Williams and her sister Frances.  The girls worked for a while, then gave their notice.  Shortly after they left, Mrs. Daly noticed things missing—specifically $2,000 worth of jewelry.

She notified police and detectives and Inspector McClusky began an investigation.  Before long he discovered that other women in the neighborhood had been robbed.  Based on the description of the two sisters “it was easy to trace the women to their home,” said The New York Times on December 27.

The police raided the Williams girls’ apartment at No. 201 East 97th Street.  “Two trunks full of silverware, bric-a-brac, and costly furs, worth, in all, according to the police, over $10,000, were taken from the rooms occupied by the prisoners and sent to Police headquarters to await identification.”

Around the same time Dr. Daniel T. Millspaugh moved in.  He would stay in The Orchid into the 1920s.  The doctor ran his medical practice from here and operated the Riverlawn Sanitarium in Paterson, New Jersey.  Millspaugh’s advertisements for the facility promised “care and treatment of all Forms of Nervous and mild Mental Cases.  Alcoholic and Drug Addiction—selected Cases Only.”  Riverlawn offered “All Approved Forms of Treatment Used.  Baths, Massage, Electricity.”

The Orchid continued to attract white-collar occupants as World War I approached.  G. W. Sterling was Freight Traffic Manager of Pier 19 on the North River; Albert J. McCullagh was an “investigator,” and Thomas F. Dooley was a civil servant, earning $1,800 a year as an “attendant” in Supreme Court, 1st District.  (Dooley’s salary in 1918 would equate to about $26,000 today.)

Although they were not considered wealthy, the residents were well-off enough that, like the Dalys, most had domestic help.  Carrie Strauss was working as a servant in one of the apartments in 1918 when, it appears, the family was preparing to leave for the summer.  She placed an advertisement in Gleanings in Bee Culture in April that year seeking “a position for the summer with a bee-keeper by a farmer’s daughter.”

Scandal visited  The Orchid in 1921 when Mrs. Mary Elizabeth Macgowan sued her husband, Claude, for failing to pay her $25 a week alimony.  Claude H. Macgowan had been manager of the Universal Film Manufacturing Company.  Their troubles started when he began seeing Elizabeth Stephens.

Mary Macgowan told Justice Delehanty on April 21, 1921 that her husband left her “more than two years ago, and was at one time living with Elizabeth Stevens [sic]” at No. 170 West 78th Street.  “A boy, David, was with the couple, Mrs. Macgowan,” reported The Times.  “Mrs. Macgowan says her husband lived at that address until Dec. 23, last.”

As if Claude Macgowan’s cohabitating with Elizabeth Stephens was not shocking enough, he kidnapped his children and brought them to The Orchid.  “Mrs. Macgowan further alleges that her husband spirited her two children, Claudia and Ursala, from a convent on Staten Island and took them to the apartment occupied by the other woman.”

Despite Macgowan’s affair with “the other woman,” residents of The Orchid were mostly highly respectable.  In 1922 Margaret Baker Morison, who was a 1907 graduate of Bryn Mawr College, was teaching English at Miss Chapin’s School.  That same year resident Mary G. Earl was working as a psychologist with the Department of Hygiene.

In 1968 a renovation resulted in two apartments on the first floor and three each on the upper stories.  The building, which had long ago lost its charismatic name, appeared in the 1977 film The Goodbye Girl.  Richard Dryfuss, as Elliot, and Marsha Mason, playing the part of Paula, shared an apartment here in the Neil Simon hit. 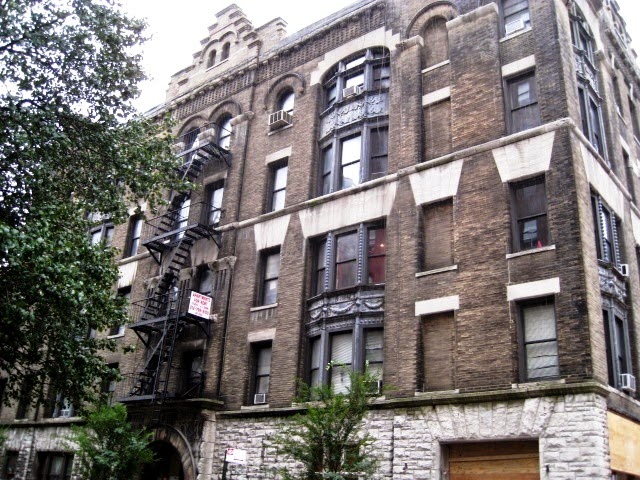 Higgs & Rooke’s eccentric structure retains most of its architectural charm.  Garish store fronts replace the originals on the avenue and the façade is inexcusably grimy and the metal elements rusting.  Yet it survives as a wonderful relic of a time when the West Side was flexing its muscle as Manhattan’s newest neighborhood.