On January 9, 1886 a hearing was held in the Gilsey House hotel on Broadway and 29th Street.  The Gilsey House was just one of a string of respected hotels within a few blocks of one another in the area; but despite their presence, the neighborhood to the west was rife with prostitution, gambling and other vices.  Known as the Tenderloin, it was also termed “Satan’s Circus” by social reformers.

Police Commissioner John N. Beckley listened to witnesses who praised the moral character of saloon owners, including perhaps the most notorious of all, Thomas Edmond Gould.  The New York Times reported that listeners in the make-shift courtroom could not help being amused at the farce.

“Smiles flitted across their faces in spite of themselves when the witnesses spoke of the reputable and highly moral character of the women who frequented the Haymarket and Tom Gould’s.  Such listeners as hadn’t before learned of the high moral character sustained by various resorts on Sixth-avenue, between Twenty-sixth and Thirty-first streets, rubbed their eyes and wondered.”

Tom Gould’s saloon, the Cremorne, was at No. 52 West 31st, just steps from the Grand Hotel on Broadway.  Gould’s brother-in-law, Thomas F. Parker, was his right-hand man and trusted accomplice and the pair had quickly gained an unsavory reputation with police and the press.  On July 26, 1885 The New York Times reported on Tom Gould’s expired liquor license.  The newspaper said it was “now running without licenses, and the police are called upon to take action in the matter.”

A hearing was held on September 7 regarding the issuing of a new license for Gould’s saloon.  “Commissioner Morris opposed the granting of the license strenuously, and stated that, according to Capt. Williams’s report on the place, it was a concert saloon and patronized by men and women of bad character,” said The Times the next day.  But Tom Gould knew people.

The application was in Tom Parker’s name.  “Among those who spoke a good work for Mr. Parker were Senator Gibbs and residents of the vicinity.  Excise Commissioners Mitchell and Haughton voted in favor of the place and it was licensed,” said The Times.

Only a month later the commissioners who had approved Parker’s license were on the hot seat themselves for graft and corruption.  A committee of Senators, called the Gibbs Committee, investigated what The New York Times called “the lurid light of the facts.”  Of particular interest to the senators was the issue of Tom Gould.

“Speaking about the Excise Board’s dealings with Tom Gould and his dummy, Thomas F. Parker, Commissioner Morris said that though he had never been inside of Gould’s place he had frequently remained in the neighborhood outside of it until after midnight, observing the people, particularly the women, who passed in and out.  The witness saw among them women of the most dissolute character.  No respectable women ever went in there.”

Before long Tom Gould moved his business a few doors west, opening the San Souci Gardens at No. 56 West 31st Street in a converted three-story brick house.  Once the home of Sarah Marsh in more respectable days, it now had a spacious barroom with the handsome carved hardwood bar expected in Victorian watering holes.  Here, in addition to drinking and enjoying the attentions of “dissolute” women, patrons were treated to entertainments.  The problem for Gould, once again, is that he had no license for that sort of operation.

On November 9, 1886 he was charged with contempt of court “having violated an injunction obtained by the city to restrain [him] from giving theatrical or minstrelsy entertainments in the Sans Souci without first obtaining a theatrical license from the Mayor.”

But rather than obtain a license, Tom Gould simply continued to run his business as usual.  Each time he was ordered to appear before a justice on contempt charges, he pleaded that he was “dying of consumption.”  The New York Times later remarked that Gould’s constitution always improved “as soon as an adjournment of his case was secured.”  After five such instances, Recorder Smyth issued a bench warrant and declared his bail forfeited.

So Thomas Gould crossed the river to Hoboken where he assumed he was safe from arrest by New York officials.  But in February 1887 he was arrested in Busch’s Hotel and “was much distressed when he found himself in custody,” according to The Times.  But it was midnight, the recorder had gone home, and a Justice of the Peace named Gustav Streng was roused from his bed to hear arguments against the prisoner.  He thought the entire affair a lot of “fuss” and accepted bail.

“After a little, Gould remembered an engagement of importance and left the company,” said the newspaper on February 18, 1887.  “Some said that he had gone to Philadelphia, others named Canada.”

Although his lawyer insisted he did not own the West 31st Street saloon, the six indictments against him could earn him four or five years in prison plus a fine.  “Consequently he is not expected again hereabout for some time,” opined The Times.  “The place on Thirty-first street was running as usual last night.”

When Gould failed to appear before the court on February 18 police shut down the Sans Souci.  Captain Williams told reporters on February 18, 1887 “The place has been shut up, and I propose to see that it is kept shut.  If anybody tries to open it I will put a uniformed barkeeper in there who will make things lively.”

Gould’s attorneys promised that he would appear “without fail” on Friday March 4.  But the hearing came and went without an appearance.  “Tom Gould, the indicted dive keeper, whom the New-York police are very anxious to get hold of, disappointed Justice Strong, of Hoboken, again yesterday,” reported a newspaper.  Gould’s Hoboken bondsman, Thomas Miller, suggested that the fugitive was in Canada and newspapers predicted “is not likely to return until the storm blows over.”

By fleeing to Canada Tom Gould forfeited $2,000 in bail—over $47,000 today.  Then he surprised everyone involved when he reappeared in the Hoboken courthouse with his attorney, Mr. Hummel, on April 29.  He pleaded guilty to four indictments and Hummel “made an appeal for mercy.”

After all, said the attorney, “He was without occupation and his place of business had been closed up.”  Fortunate that the case was heard in New Jersey rather than New York, Tom Gould had a sympathetic ear in Judge Gildersleeve.  He received no jail time and was fined $500 for violating the amusement law and $500 for violating the excise law.  “The fine was immediately paid and Gould left the court room with his friends,” reported a disappointed reporter for The New York Times.

The close call did not teach Tom Gould any lessons in law abiding.  On February 15, 1888 The Times ran the headline “After ‘Tom’ Gould Again.”  Despite the injunction that forbade him to give theatrical entertainments at San Souci without a license, nothing changed.  Officers John F. Tappan and John F. Flood visited the saloon on February 1, 2, 4 and 5 and “heard music and songs, saw men and women drinking and smoking, and that ‘Tom’ Gould was the ‘boss’ and gave the orders.”

The New York Times reminded readers that he had been judged guilty of contempt a year earlier “whence he was released on account of the affidavit of the jail physician that he was dying of bleeding of the lungs.  Gould at once regained his health after release.  Should he get in again he will have to stay for a long while.”  The charges against Gould and his saloon did not touch upon the true nature of the place.  The Times described the San Souci as “as vile a den as there has ever been in this city.”

On December 26, 1891 Tom Gould was arrested in connection with the murder of John J. Wogan.  “There is no question that Gould is one of the most dangerous and disreputable characters in the city,” said The Times.  “Crime has for years been his daily routine.  Anybody who was liable to meet Gould is safer to-day from the fact that the man is under lock and key.”

The days of the San Souci Gardens finally came to a close.  The saloon was converted to the pawn shop of Hyman Stern.  Stern was probably pleased when a young Englishman, Arthur Edward Matthews walked in on January 26, 1893 with 36 silver forks and 5 spoons to pawn.  The 25-year old Matthews left with $35 cash (nearly $900 in today's money).  It was not until detectives arrived a few days later that Stern discovered that Matthews, the butler of millionaire Henry Villard, had stolen the silverware.

Over a period of two months, the butler had taken silverware to a number of pawn shops.  “But for his arrest he would doubtless have left his employer without silver enough to set the table,” said a newspaper account.  Unfortunately for Stern, the stolen flatware was confiscated by police.

The silverware was not the only stolen item that passed through Hyman Stern’s hands and when the Lexow Committee—a Senate committee formed to investigate corruption within the police department—began its hearings in 1894, it turned its attention to the pawnbroker.

On September 10 Hyman Stern took the stand and was questioned about a gold pocket watch.  The stolen Tiffany & Co. timepiece had been brought in by Detective Sergeant Charles A. Hanly on October 25, 1893.  Stern told the committee that when new the watch probably cost about $150, but now its value was about $75.

Senator Goff sensed that Stern and the policeman worked together to fence confiscated evidence.  He asked “It is customary for you to advance $60 on an article valued at $75?” and Stern replied that he tried to advance as much as possible so as to get as much interest as possible.

“And you have made money,” asked the dubious senator.

Stern remained in business for years at No. 56 West 31st Street.  Whether he had poor judgment or poor ethics is unclear; but his operation still bore the taint of suspicion at the turn of the century.  In December 1901 Nina Von Erlanger entered the shop with an extraordinary collection of diamond jewelry.  The European opera singer went by the stage name Nina Diva; however she gave her name as Roeder to Hyman Stern.

The seven pieces of jewelry had belonged to the opera singer; but when she needed cash she received a loan from Louis Reinhardt, giving it to him as collateral.  Then, as her New York tour was coming to a close, she borrowed the jewelry.

With the diamonds back in her possession, she rushed to Hyman Stern who gave her $6,000.  Stern now had the jewels, Nina Diva boarded a steamer to Europe, and Louis Reinhardt had been swindled out of thousands.  When police showed up at Stern’s pawnshop on February 20, 1902 to retrieve the seven pieces of jewelry only five were still there. 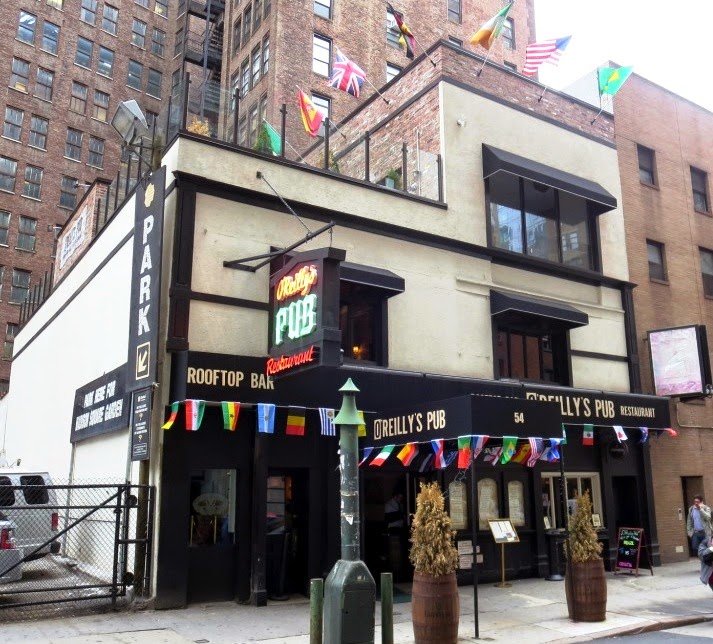 As the century wore on the neighborhood, once the most notorious and crime-ridden in the city, was engulfed by the garment and novelty district.  Somewhat amazingly, the converted brick house where Tom Gould operated his saloon survived--albeit much altered.  Today, appropriately, it is home to a bar—one that is operated in a much more respectable fashion than Tom Gould's Sans Souci.