In the decade prior to the Civil War the County of New York made do with a small brownstone building erected in 1852.  Only six years later a movement was underway to erect a substantial courthouse.  Public stocks were sold to garner the funds.

Commissioners quickly realized that the original 1858 estimate of $250,000 for the building was inadequate.  They raised the budget to $1 million the following year—more in the neighborhood of $27 million today.  In the meantime William M. Tweed was garnering increased political power.

In 1857 Tweed became a member of the Board of Supervisors, the county’s chief legislative body.  By the time ground was broken for the County Court House the day after Christmas in 1861, Tweed and his “ring” would wield unfettered control.

When the cornerstone was laid the names of two architects were placed inside.  Thomas Little, of Thomas Little & Son, apparently drew up the initial plans in 1859; but on August 30, 1861 the Board of Supervisors determined “to employ a suitable architect.”  John Kellum’s name would accompany Little’s in the small box within the cornerstone.

Kellum was reaching the apex of his career and the County Courthouse would be a monumental accomplishment.   Constructed of white marble, it took its inspiration greatly from the United States Capitol building as well at the 1735 Mansion House in England.  A sketch in 1868 shows the structure capped with an imposing dome; creating a striking similarity to the Capitol.  In 1869 New York Illustrated mentioned “when completed, the building will be surmounted by a large dome, giving a general resemblance to the main portico of the Capitol at Washington.”

The Civil War caused a temporary halt in construction, but by 1865 the exterior was essentially completed and work had begun on the interiors.  By the time the Court of Appeals moved into the unfinished structure in March 1867, the rampant graft and corruption of the Tweed Ring was already being noticed.

In 1866 Supervisor Smith Ely, Jr. raised a red flag, saying “grossly extravagant and improper expenditures have been made by the persons having charge of the building of the new courthouse, in reference to the purchase of iron, marble and brick, and in the payment of various persons for services.”  In fact, Tweed and his cronies were paying highly inflated prices and taking 20 percent of the billing costs for themselves.

On October 2, 1871 the New-York Tribune printed a scathing report that said in part “There certainly never were more barefaced or bolder robberies perpetrated under any government than have been committed under ‘Ring’ rule in this City…Over ten millions of dollars has been paid in two years and a half simply for decorating and furnishing the County Court-House, Wm. M. Tweed’s new office on Broadway, and the Mayor’s Office.”

Just over three months earlier, John Kellum died, never to see his monumental civic building completed.  The task of completing the court house was passed to Leopold Eidlitz in 1875.  Eidlitz was not interested in sympathetically melding his designs with Kellum’s.   Instead his southern wing was a Victorian take on medieval styles.
In the meantime, in what was a case of supreme irony, William M. Tweed appeared in what would soon be popularly termed the Tweed Court House on November 19, 1873.  He had been arrested on October 27, 1871 and within the year was convicted on 204 counts.

Eidlitz’s disregard for Kellum’s classic design raised the wrath of some architectural critics.  On April 29, 1877 The New York Times criticized “it is also charged that the new style of architecture is wholly out of keeping with the rest of the building and that while it might be well enough in a fashionable church on Fifth Avenue, or a highly decorated lager beer brewery at Yorkville, it is cheap and tawdry in comparison with the elaborate finishing and classic exterior of the present structure.” 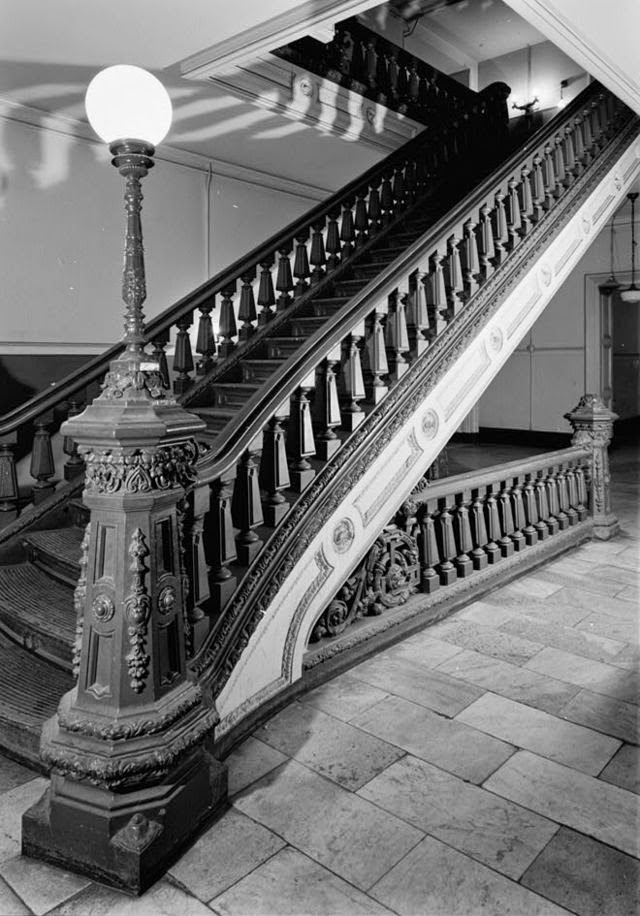 After two decades of construction the New York County Courthouse was finally—essentially, anyway—completed in 1881.  Despite the exorbitant costs New York had a sumptuous civic structure; but the stain of the Tweed scandal blinded the public to its beauty and would threaten its existence for over a century to come.

The new County Courthouse attracted a peculiar crowd of loiterers and eccentrics.  On June 20, 1886 the New-York Tribune noted “The queer people seen and the queer things they say in the new County Court House that Tweed built are worthy of being chronicled…There were broken-down politicians, old and used-up officials, persons willing to show strangers the Court House for a small consideration, others ready to assist those who wanted to become naturalized and others too lazy to do anything.”

On April 11, 1888 the building was used for the wedding of Julia Clarkson, “the pretty daughter of Edward Clarkson, janitor of the building, to Edward J. Reynolds, a well-known builder.”  The Sun reported that “Boss Tweed’s twenty-million-dollar Court House was the theatre of an unusual scene last evening.  Three of the solumn court rooms were converted into a spacious banquet hall and ball room to accommodate a wedding party.”

“An orchestra was stationed in front of the Judge’s bench in the equity division, and dainty feet marked time to its music on floors that had hitherto echoed only to the ponderous tread of men of affairs,” said the newspaper.

Before long, however, it would be talk of demolishing the building that took up newspaper space.  On September 13, 1893 The New York Times reported on the 130 architectural plans that had been received in a competition for a new City Hall.  Along with it came a movement to demolish the courthouse.

It seemed only Controller Myers saw the qualities of the building.  The newspaper said “He thought that the Court House had come in for more than its just share of abuse.  The building cost, with furniture, over $14,000,000, and despite the fact that much of this enormous outlay was squandered, it is nevertheless an imposing structure.”

The courthouse survived; but just seven years later it was in danger again.  Officials pressed to clear City Hall Park of all buildings other than the venerable City Hall.  The New York Times chimed in saying on March 13, 1901, “that especially the Tweed Court House, as an ugly monument of fraud and municipal disgrace, should be razed as soon as accommodation can be had elsewhere for the uses it now very imperfectly and inconveniently subserves.”

A reader wrote to the editor of the newspaper in response.  “No building in New York is so generally disliked as the Court House, and honest men long for the day when the space it has polluted shall be restored to the much-abused City Hall Park.”

The debate was still hot in July 1902 when it was suggested that $2 million could refurbish the old building.  “And as to spending two millions on the Tweed Court House, which is a stench in the moral olfactories of all New Yorkers, and which has nothing architecturally valuable, excepting the incongruous addition which puts it to an open shame, that was a very improvident judicial expression of dissatisfaction with quarters which are undoubtedly dissatisfying which led certain revered Justices of the Supreme Court to commit themselves to it,” railed The New York Times on July 19.

Two years later plans for the new courthouse had advanced no further; and the Tweed Courthouse was falling into disrepair.  On September 13, 1904 The Sun noted “the old Tweed court house [is] daily falling into a more dilapidated condition, despite constant patching and attempts at improved ventilation, with the rain pouring through its cracked walls and wornout roofs whenever there is a storm.”

More and more it became evident that the neglected building was no longer adequate for the growing county courts system.  Nevertheless the Board of Estimates continued to drag its feet regarding a new structure.  In July 1911 The Times was still supporting the idea of removing all buildings from City Hall Park other than the magnificent Federal style City Hall.  It bluntly wrote “The Tweed Court House must go.”

Astoundingly, despite what was nearly universal support to destroy the County Courthouse, it survived.  When, in 1915, a proposal was suggested to enlarge it, its fervent nemesis The New York Times reacted.  “It is proposed…to enlarge the Tweed Court House, which is unsightly and uncomfortable and a disgrace to the city.”

The new New York County Courthouse nearby on Centre Street was finally completed until 1927.  With the courts gone, the old Tweed building seemed destined for destruction.  Yet it survived, being used for the City Court until its next major threat—Mayor Fiorella La Guardia’s thrust to clean up the city for the 1939 World’s Fair.  Among his first priorities was the restoration of City Hall Park.

“Mayor La Guardia is eager to complete the work on the park in time for the World’s Fair, so that visitors may have a vista of City Hall from historic St. Paul’s Chapel at Vesey Street,” explained The Times on May 21, 1938.  “Mayor La Guardia is also eager to have the old Tweed court house in the park behind the City Hall razed and administration officials have been trying to find new quarters for the City Court now located there.”

But the old courthouse hung on.  A year later Parks Commissioner Robert Moses was still seeking appropriations to raze the building.  “The only blot on the landscape which will remain at the end of 1940 if these funds are appropriated will be the so-called ‘Tweed’ Court House,” he beamed on September 18, 1939.

Nearly half a century of attempts to destroy the monumental court house had proved fruitless when in the spring of 1942 Chambers and Lafayette Streets were widened as part of an improvement plan for City Hall Park.  In describing the necessary removal of the entrance stairs on April 9, 1942, The New York Times used what was perhaps its first positive adjective since the building had been completed.

“Workmen of the WPA were busy yesterday demolishing the imposing but long unused flight of steps leading from Chambers Street to the rotunda of the old County Court House…familiarly known as the Tweed Court House.”

But the threat to its survival was not over yet.  In 1948 the City Planning Board discussed the development of the Manhattan Civic Center.  The Times said on June 25 “it envisages also the demolition of the old Tweed Court House and consequent improvement of City Hall Park.”

Yet once again, the court house dodged the bullet.

One might have guessed that by the 1970s the Tweed Courthouse was finally safe.  But almost immediately upon taking office in 1974 Mayor Abraham Beame set out to demolish it.  The Times said on July 7 that year “Its demolition, never announced publicly, was an early, almost instant administrative decision.  It was simply the ultimate extension of the conventional wisdom that the building is nothing but a shoddy piece of graft.”

Architectural critic Ada Louise Huxtable called it “a substantial and stylish building” with “impressive interiors.”  She flatly pointed out “In spite of its obvious qualifications, the Courthouse is not a designated landmark.  It has been so universally repudiated for its unsavory associations that it is probably too hot a political potato for the Landmarks Commission.”

Against all odds the imposing yet maligned structure survived its final threat.  In 1984 the Landmarks Preservation Commission designated the Tweed Courthouse a New York City Landmark.  In 1999 a full-scale, two-year restoration was initiated.  The $85 million project not only uncovered layers of paint inside, but recarved missing or damaged marble elements of the façade.  The entire marble cornice was reconstructed—requiring 120 blocks of stone, some weighing 9,600 pounds.

In what was perhaps the most noticeable part of the restoration, the grand entrance steps were rebuilt.  Inside, an octagonal stained and etched glass skylight--52-foot wide—was refashioned to replace the original, lost decades earlier.

Today the future of the monumental courthouse that brought down the infamous Boss Tweed is secure.  Its elegant design and historical value are finally appreciated after more than a century and a half.
Posted by Tom Miller at 3:11 AM