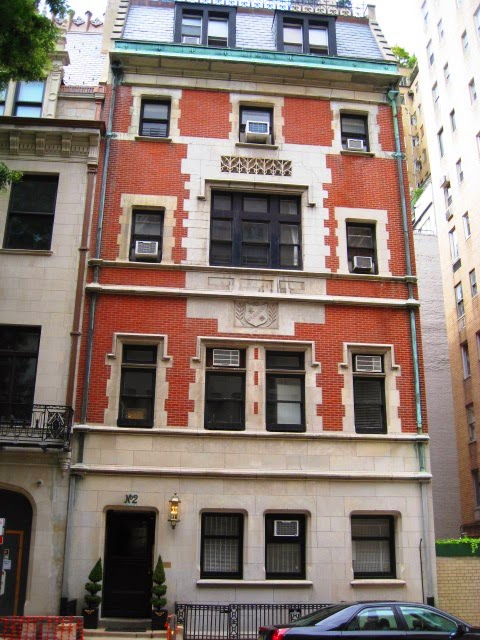 Following their honeymoon, Henry R. Hoyt and his bride moved into No. 87 West 10th Street.  But it would be a temporary stay.  He purchased the plot of land at No. 2 East 75th Street, steps away from Fifth Avenue and in October 1893 filed plans for a “five-story brick house” that was expected to cost $28,000—about $700,000 today.

Henry and Emy Hoyt had four children—Henry Jr., Alfred, Gretchen and Elizabeth.  In the summer season all wealthy New Yorkers abandoned the stifling city for country estates or seaside resorts.  In 1903 newspapers noted that the Hoyts had closed their house and left for Sag Harbor, Long Island, for the season.

Before long entertainments in the 75th Street house would center around the growing children.  On December 21, 1904 the Globe and Commercial Advertiser noted that “Miss Gretchen Hoyt has her formal presentation to society to-day at a reception given during the afternoon by her mother, Mrs. Henry Reese Hoyt of 2 East Seventy-fifth street.  The reception will rank among the largest of kind.  A dinner for the receiving party follows the reception.”

If Gretchen’s debut was a bit early by social norms, Elizabeth’s would not be.  Three years later Emy gave a cotillion in the house for Elizabeth who, said The New York Times, “is not yet out.”  On December 26, 1907 at around 9:30 the young guests began arriving.  They danced until around 11:30 when supper was served.  The Times remarked “The guests invited included the young girl and boy friends of Miss Hoyt who are not yet out.”

Earlier that year Elizabeth’s father had enlarged the house with a rear addition designed by Henry Pelton.  It would not be the last of Henry Hoyt’s renovations.

The following year Elizabeth would serve as maid of honor in Gretchen’s high-society wedding in St. Bartholomew’s Church on June 3, 1908.  Before Gretchen married the Harvard-educated banker Henry Ladd Corbett of Portland, Oregon, she hosted a glittering dinner party in the house for the bridal party.

Emy Hoyt pulled out all the stops in decorating the church, prompting The New York Times to say “The church decorations were unique and perhaps as fine as have ever been seen in New York.”  The sanctuary of St. Bartholomew’s was transformed into an Italian garden with aisles of bay trees.  Around their trunks grew white and pink peonies.  Emy carried the theme to the chancel.  “The chancel was a miniature Italian garden, with its bay trees arranged in prim lines, huge jars of rhododendrons and peonies giving the effect of growing flowers.”

The reception was held in the 75th Street mansion where guests with names like Roosevelt, Stokes, Alexander, Sturgis and Lydig offered congratulations--and gifts.  Following the honeymoon Gretchen and her husband returned to Portland to live.

1909 was finally Elizabeth’s debutante year.  There were to major entertainments in the house during December, beginning on the 6th.  That night 30 guests sat down to dinner, after which additional guests arrived for the cotillion.  Van Baar’s orchestra played throughout the night and at midnight a buffet supper was served.

Almost three weeks later, on December 20, a second wave of guests arrived.  Emy Hoyt had the reception room decorated with Christmas greens, holly and mistletoe.  Forty young people were invited to dinner and another 60 arrived for the dancing afterward.

On August 27, 1910 the Real Estate Record & Builders’ Guide noted that Henry R. Hoyt had filed for alterations to the house.  Architects Hiss & Weeks had been commissioned to do $1,800 in renovations including “partitions, stairs, and piers.”  The New York Times had remarked a day earlier that the plans called for “entirely remodeling the interior.  It was at this time that the street level received a new limestone façade, generally in keeping with the overall architecture.

By now the Hoyts’ wealth and social standing were at a peak.  The title of the grand country home in New Marlboro was in Emy’s name and she was one of the principal owners of the 6,000-acre Marlboro game preserves.  Henry was a member of the best gentlemen’s clubs, including the Union, University, Automobile, New York Yacht Club, Racquet and Tennis Club, the Downtown Club, the South Side Sportsmen’s Club and the Riding Club.  He served on the board of the Metropolitan Opera and no fewer than ten corporations including banks, mines, and real estate firms.  Additionally Hoyt was the legal representative of the Italian Government and for the French Consulate in New York City.

On January 20, 1915 Elizabeth married Thomas H. Frothingham of Boston.  It would be a rocky relationship.

But in the meantime, Henry Hoyt continued remodeling his mansion.  On November 8, 1919 The Real Estate Record & Guide reported that Hiss & Weekes was back at No. 2 East 75th Street, this time designing a $10,000 penthouse on the rear addition.

Just over a year later, in January 1921 Henry Reese Hoyt died of a heart attack in Chicago.  The 59-year old had appeared to be in excellent health before his attack on New Year’s Day.  Emy and Alfred rushed to Chicago, as did Henry’s brother and sister, John and Rosina.  They were at his bedside on January 4 when he died.  Three days later an escort of motorcycle policemen accompanied a cortege with Hoyt’s body from the house on East 75th Street to St. Bartholomew’s Church.

Alfred and Henry Hoyt, Jr. still lived in the family home.  Elizabeth and her husband, who now lived at No. 153 East 71st Street , maintained a second house in Far Hills, New York.  Thomas Frothingham worked for the brokerage firm of Potter Brothers & Co. at No. 5 Nassau Street.  As the summer came to a close that year, with his mourning mother and brother away, Alfred was living alone in the house with just one servant.  Elizabeth and Thomas suggested he come to their Far Hills home for a visit.

On September 9 it was arranged that he, Elizabeth and Alfred would meet at the 75th Street house at noon, and then travel together to Far Hills.  Thomas Frothingham arrived first and was let in by the assistant housekeeper.  While waiting for his wife and brother-in-law, he poked around in Alfred’s rooms and there he found a loaded pistol.

When Alfred and Elizabeth arrived, they were told that Frothingham was already there.  “That much they learned when they entered the foyer, but there was no sign of him, nor did he answer Hoyt’s hail,” said The New York Times on September 11, 1921.  The two began a search.  “In Hoyt’s bedroom, on the second floor, they found him lying in a heap, blood oozing from the wound in the left shoulder.”

Whether an accident or not, a gunshot in a mansion bedroom could spell scandal.  A private ambulance was called and Frothingham was taken to a private ward in Presbyterian Hospital without notifying police.

When news leaked to the newspapers, reports suggested a cover-up.  “Shooting of Broker Kept Secret 2 Days” read a headline in The Times.  On September 11 the New-York Tribune wrote “All information concerning Mr. Frothingham’s accident was refused by Mr. Hoyt’s housekeeper and other persons living at his address.  Except to admit that he was still a patient, attendants at the hospital last night refused to comment on the case.”  When the Tribune’s reported questioned the housekeeper she replied “I know nothing of any shooting.”  The Times reported on September 11 “A maid at the Hoyt home answered the bell last night and said nothing was to be learned there.”

The mystery would come to mind three months later when Frothingham filed for bankruptcy and “it was alleged that he had made fraudulent misrepresentations” in the sale of silver mine stocks, as reported by The New York Times.  Among those he reportedly cheated was his wife, Elizabeth.  The Times said he had transferred $1.5 million in silver mine stocks “to his wife and other preferred creditors when he knew he was insolvent.”
Two years later Thomas Frothingham deserted Elizabeth and their three children and disappeared to Memphis, Tennessee.   When Elizabeth filed for divorce on April 11, 1927 she was back in the family mansion with her mother and brothers.

The family managed to garner less scandalous press going forward.  In September 1928 Henry Jr. was in a small airplane lost in a thick fog.  Persons on the ground, hearing the engine, grabbed flashlights and directed the plane to a football field where it landed with only a smashed landing gear.  In 1929 Emy’s name appeared in the newspapers when she inherited the Lydig family silver following the death of Philip Mesier Lydig; and that same year Alfred was appointed aide-de-camp to Governor Flem D. Sampson of Kentucky.

On December 15, 1932 the house was the scene of Elizabeth’s quiet wedding to William A. W. Stewart.  The Times felt obligated to mention “He gave his age as 56 years and she 35 years.”

Emy Otto Hoyt lived on at No. 2 East 75th Street until 1941.  In April that year she rented an apartment at No. 1040 Fifth Avenue where she had 12 rooms and five baths.  Two months earlier she had sold the townhouse to Albert Klein who intended to convert it “into an apartment building of small suites,” as reported in The New York Times on February 21.

Klein changed his mind a week later and resold the mansion to Benjamin Cohen.  The Times reported “It will be altered into sixteen apartments of one and one-half and two rooms and penthouse.”  At the time of the first sale the newspaper published a photograph of the mansion with its marvelous oriel window intact.  Sadly, like the grand interiors, it would not survive.

Architects did an admiral job of patching the hole where the bay window and balcony had been.  Stone quoins around the clustered windows mimicked the originals as did the drip moldings.  A pseudo-heraldic shield and a carved panel decorated the new stone face.

Since then little has changed.  There remain 12 apartments inside and the facade is carefully maintained.  Sadly, without its wonderful oriel, the mansion looks more like a clubhouse than a home.