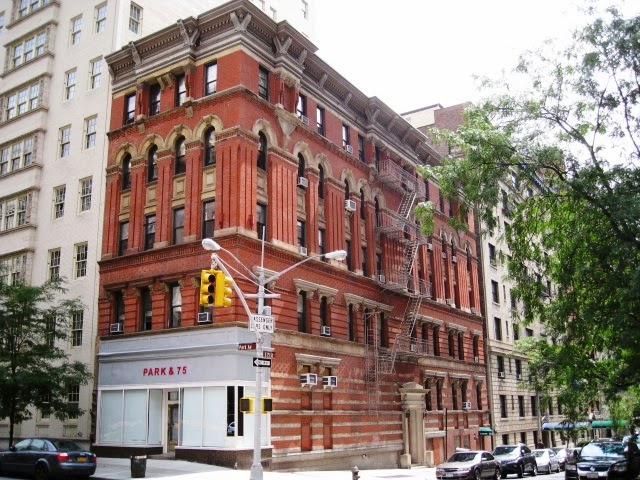 Although in 1891 Cornelius Vanderbilt’s train tracks to Grand Central Depot had been submerged below Park Avenue for more than a decade, it would be another ten years before millionaires began constructing mansions on the avenue.  But the neighborhood was becoming more respectable.  Where small butcher and grocery shops and modest homes had stood, rows of Queen Anne rowhouses cropped up, along with French flats—the term used to distinguish upright apartment buildings from tenement houses.

Getting in on the trend was developer Lorenz Weiher.  A year earlier he had purchased the entire block of properties fronting Park Avenue on the east side, as well as the house at No. 101 East 75th Street.  It was here in No. 101 in 1866 that 12-year old Richard Humphrey lived.  That year he blew his middle finger off “by the premature discharge of a pistol which he was loading” in preparation for the Independence Day celebration.

Weiher had the existing structures razed and in their place erected a row of seven brick, stone and terra cotta flats which he gave the impressive name, The Terrace.  The structures featured the latest in 1890s taste.  Generally neo-Renaissance, they included nubby terra cotta tiles borrowed from the Queen Anne style and incised lines within the two-story brick piers of the fourth and fifth floors, made popular by the Eastlake Movement. 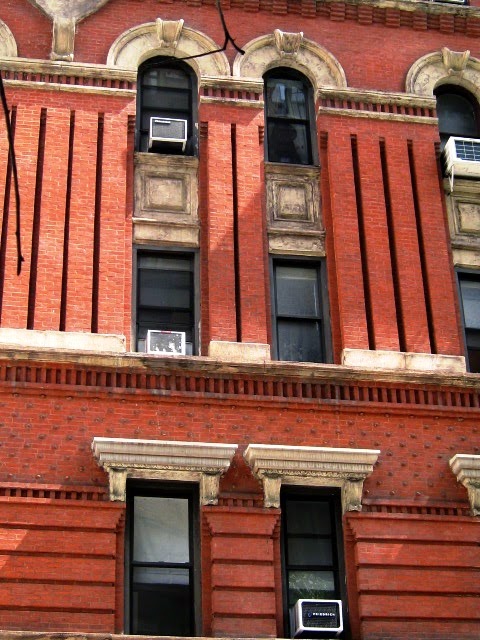 Placing the entrance of the corner buildings on Park Avenue would have caused a logistical problem.  The architect would have to bisect the front apartments for the stair and hall; and residents might be faced with a long walk inside.   With the entrances placed on the side streets, the two apartments on each floor were separated by the stair hall—providing commodious flats six bays wide on the east and west sides of the hall.  The arrangement also provided store space on Park Avenue for the two buildings.

Weiher’s $170,000 project was completed in 1891 and No. 101 East 75th Street, the southern anchor building, filled with a variety of tenants.  They were seemingly comfortable businessmen, like Nathaniel White who ran a watch business on Maiden Lane, and Louis N. Lake, a grain broker.

Hendrik-Dirk Kruseman Van Elten was also among the first residents.  Born and trained in Holland, he was an established landscape artist before first exhibited at the National Academy of Design in 1866.  By the time Van Elten moved into No. 101, his European style had become heavily influenced by the Hudson River School.

The comfortable financial conditions of the residents was reflected in Sophia Stitzer’s brush with a burglar on September 9, 1896.  When the widow returned home that afternoon, she realized that her door had been forced open.  As she entered, a man rushed past her and down the stairs.

Sophia Stitzer was right behind.  She caught the attention of a policeman and 40-year old Frank Coleman was promptly arrested.  The burglar was searched and The New York Times reported that “$700 worth of watches, jewelry, and diamonds was found on him.”  Although not all of the loot was Sophia’s (he had robbed the flat of Milton Pemberton at No. 101 East 78th Street the same day), the haul would amount to over $18,000 today.

The retail space at No. 101 was home to Heinrich F. Holtorf’s grocery store.  The German-born immigrant lived upstairs with his wife, Christina, and their three children.  Like almost every other resident, they had servants—Gertrude Hecker was their cook and teenaged Freda Hense helped with the children.

By 1902 J. B. Henck, Jr. lived here.  He was a member of the Appalachian Mountain Club and apparently he found the racket of city life a distressing contrast to the calm of forest hiking.  On January 15, 1906 the New-York Tribune published his letter to the editor regarding the annoying whistles of Hudson River boat traffic.

“Whatever tends to reduce the wear and tear of nerves in a great city is worth serious attention, and that is my excuse for asking space to suggest what I believe would be a practicable substitute for the constant tooting of whistles on our rivers and harbors,” he began.

Henck suggested connecting the ship’s whistle cord to a pulley fastened to a shuttered lantern.  “Then whenever the whistle was blown the light would be uncovered, and there would be a flash for every toot.”  Henck suggested that after awhile, river captains would become accustomed to the lights and the annoying whistles would no longer be necessary.

Heinrich Holtorf was doing well for himself in his corner grocery store and when the building was put on the market in March 1909 he purchased it for $75,000 (about $1.85 million today).  Before the year ended, the rest of The Terrace buildings were purchased by a syndicate which demolished the row—leaving No. 101 the sole survivor.

By the time of World War I Park Avenue was seeing the rise of brick and limestone mansions.  The street’s heightened upscale reputation was reflected in the tenant list of No. 101 East 75th Street.  In December 1917 Louise Gardner married Frederick Rodgers, an exporter and the son of the late Rear Admiral Frederick Rodgers, in the fashionable Trinity Chapel.

The Gardner name was well-known in polite society.  Louise was the only child of John C. F. Gardner and the former Jane S. Hatch.  She had grown up in the family mansion at No. 25 West 55th Street and summered in their Nantucket home.

The Sun noted on January 6, 1918 “On their return from their wedding trip Mr. and Mrs. Rodgers will live at 101 East Seventy-fifth street.”   Two days later The New York Times alerted society that the newlyweds were back home.

The war in Europe affected the couple the following year when Frederick served on the jury in the U.S. Government’s treason case against Albert Paul Fricke.  Fricke was charged with harboring a German spy, Hermann Wessells, and of arranging meetings with other persons in sympathy with Wessells’ mission.

While Frederick Rodgers was sitting on the jury for several weeks, other tenants in the building included author Geraldine Bonner.  Her popular novels included Tomorrow’s Tangle; The Black Eagle Mystery; Treasure and Trouble Therewith; and Rich Men’s Children.  Another creative resident was Marjory Peck.  In August 1919 she entered The Rieser Company’s contest on “Why I Prefer Venida Hair Nets.”  Of the more than 5,000 entries, Marjorie won the $35 third prize.

Also living here were Mrs. Lewis Broomall and her daughter Virginia.  Virginia left her mother in June 1921 following her wedding to George Winship Taylor in the Church of the Resurrection.

Attorney Leland Blodget Duer and his wife, the former Dorothy Dean Tate, lived here at the time.  Duer’s diverse interests had led him to spend the summer of 1909 in Canada photographing moose, bear and other wild game; and later that year serving as secretary to Justice Holmes of the Supreme Court of the United States.  Now he was a member of the legal firm Simpson, Thacher & Barlett at No. 62 Cedar Street.

The Worthington family was also in the building.  Thomas Kimber Worthington had married Mary Grace Thomas in 1887 and they had two sons (their daughter died in 1912).  Mary was a graduate of Johns Hopkins University and was a Supervisor of Field Work at the New York School of Philanthropy.

Son Harold was still living with his parents in 1922.  A graduate of Yale, he had served in the U.S. Army during the war as a first lieutenant in Field Artillery.  Now he was in the import-export business and was affiliated with the Pennsylvania Railroad and General Electric Company.

That year Holtorf hoped to bring the 30-year old structure more into the jazz age.  He hired architects Schwartz & Gross to renovate the interiors and remove the Victorian portico on East 75th Street.  He stopped short of reducing the size of the apartments, however; and maintained the original two flats on each floor.

No. 101 East 75th Street would continue to attract an interesting list of residents.  Glenn Hall lived here; a well-known tenor at the turn of the century and a singer with the Metropolitan Opera Company from 1909 to 1911.  And when French sculptress Jacqueline Zay visited Manhattan in 1939, she was the guest of honor at a cocktail party in the apartment of Henry d’Omano, Director of the French Government Tourist Bureau.

At some point in the 20th century No. 101 was painted white; obliterating the contrast between brick, stone and terra cotta.  Heinrich (now referred to as Henry) Holtorf died in the building in 1937 and his family retained possession until 1951 when it was sold to Anna Efron.

A Russian immigrant, she would own the property for over three decades.  During this time the corner grocery store became a flower shop.  Efron sold the building in 1983 to Gran Sabana Corporation who, in the late 1990s stripped the paint off the old red brick.  The Landmarks Preservation Commission stepped in (the building is situated within the Upper East Side Historic District) when the firm decided to paint it yellow.

Today Henry Holtorf’s grocery is home to a gallery behind a pseudo-modern façade.  The rest of the building is a bit careworn; and the Victorian ornamentation above the cornice long ago disappeared.  And yet No. 101 East 75th Street still retains its dignity, an 1890s artifact within a sea of 20th century apartment buildings.