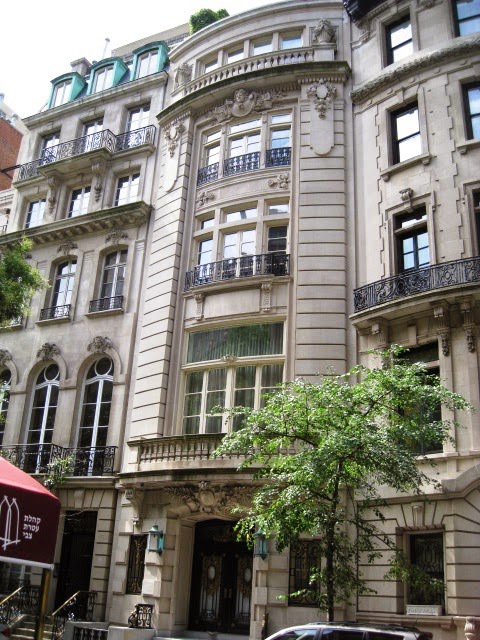 Until the turn of the last century East 62nd Street between Fifth and Madison Avenues was lined with 1870s brownstone rowhouses.  But now Manhattan’s mansion district had engulfed the neighborhood and one-by-one the old homes were either razed or drastically remodeled.  Among them was No. 8 and it, too, would soon fall victim to the trend.

Built between 1879 and 1880, it was one of a row of eight matching homes constructed by architect-developers Breen & Nason.  During the 1890s it was home to the William H. Falconer family and Mrs. Falconer routinely announced her “at homes” through the newspaper society pages.

When real estate operator Thomas J. McLaughlin purchased the Falconer residence, it was the end of the line for the old brownstone.  McLaughlin commissioned John H. Duncan to design a replacement mansion on the site.  Duncan, who had recently been busy designing fine homes for millionaires like Philip Lehman and Elias Asiel, produced a five-story limestone mansion in the popular Beaux Arts style.

Construction began in 1902 and was completed the following year.  The American basement design provided for a dramatic entranceway a few steps above the sidewalk.  Double doors with heavy French grillwork sat within a deep recess under an exquisitely-carved address cartouche surrounded by palms and ribbons.  Duncan provided a balcony for every floor, with either carved stone or handsome iron railings; each accessed by French doors.

Although The New York Times said the house “compares favorably with any of the fine residences built speculatively east of Central Park,” it was not sold until the following year.  On August 11, 1904 the newspaper said “The price is not announced, although it is known that the house has been held at $270,000.”  That would translate to just under $7 million today. 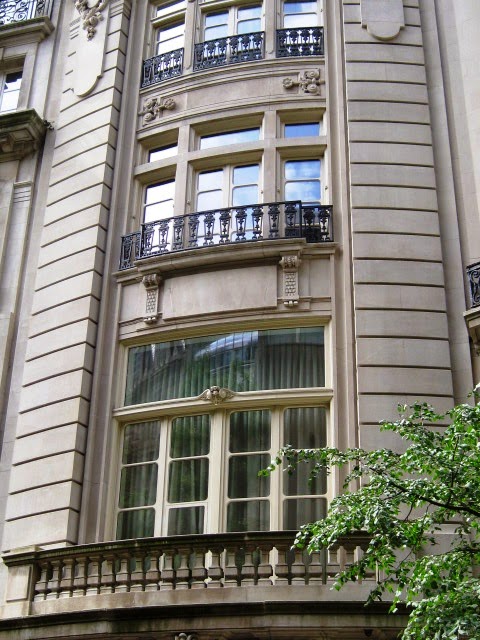 The buyer was Warner Van Norden, President of the Van Norden Trust Company.  The Year Book of the Holland Society of New York called him “a descendant of one of the oldest Dutch as well as one of the oldest Huguenot families that have figured in the early history of the city.”

Now 63-years old, the widowed banker and capitalist had been President of the National Bank of North America until January 1902, when he organized his trust company.  Deeply religious, he was a prominent member of the Board of Foreign Missions, a director of the American Tract Society and the New York Association for Improving the Condition of the Poor.

Van Norden had two sons, Warner Montagnie and the Rev. Theodore L. Van Norden, and a daughter.  When the 22-year old Emma joined the Salvation Army in October 1892, she had shocked Manhattan society.  At the time Van Norden dismissed reporters.  “Both he and his daughter were sorry that comments upon the fact had been printed, because Miss Van Norden’s action was entirely her own affair, and the family wished that no further talk might be made about it,” reported The New York Times on December 10 that year.

Captain Cox of the Salvation Army said she “was simply a good young woman who had joined the army on the same footing as any other girl less fortunate in the possession of affectionate parents, plenty of money and hosts of friends.”

Emma’s enthusiasm and hard work led to her becoming the private secretary to General William Booth after several years.  Her allegiance to the Salvation Army cost her some friends.  The Times later said “she was absolutely loyal to the army.  She would never go anywhere unless the army uniform was recognized, and this attitude cost her many friends in the circle in which she had been accustomed to move.”

By the time her father purchased the 62nd Street mansion, she was traveling more than she was home.  “In carrying out her army work it was necessary for Miss Van Norden to travel extensively,” said The Times on August 29, 1906.  “It was said of her that she had visited every land where the army had a post, and this means that she had been practically all over the world.”

When she was not traveling, Emma lived in the house with her father.   In August 1906, while she was in Scotland, Warner Van Norden was in ill health.  The woman, now 35 years old, was riding in a carriage with friends, including her cousins Ottomar Van Norden and the Rev. Dr. Oliver H. Bronson, on August 21.  The party was traveling from Glen Shee to Blairgowrie when the horses bolted “overturning the carriage and throwing out the passengers with much force,” as reported by The Times.

Emma sustained horrible injuries, including a fractured skull and the newspaper account described “a portion of the brain protruding.”  She survived for a week, dying on August 18.  In reporting her death, The New York Times mentioned “Her father has been in bad health for some time, and the news of Miss Van Norden’s accident and death has rendered his condition serious.”

To made matters worse, only a few months later, in December, the funeral of Warner Van Norden’s sister, Cornelia Van Norden Bedford,  was held in the 62nd Street house.

Nevertheless, Warner Van Norden recovered and lived on in the 62nd Street house.  His son, Warner, took over the presidency of the Van Norden Trust Company following his retirement.  Unfortunately, the junior Van Norden’s business acumen fell far short of his father’s.

Warner Van Norden died on New Year’s Day 1914.  Manhattan’s banking and social circles were shocked when it was revealed on October 15 the following year that the one-time millionaire had died penniless.  “The banker’s financial misfortune was brought about by his efforts to lift his son, Warner M. Van Norden, out of the financial hole into which the latter had fallen while President of the Van Norden Trust Company and also President of the Nineteenth Ward Bank, according to testimony of the Rev. Theodore Langdon Van Norden, another son, who appeared at the Appraiser’s hearings,” reported The Times.

The following year in November the estate leased the house to Joseph P. Grace of W. R. Grace & Co.  Mrs. Grace lost little time in opening its doors for entertaining.  On Tuesday, January 4, 1916 she gave a dance in honor of her niece, Margaret Kent.

By the 1920s the mansion was home to the John Alexander Manson family, including Manson’s wealthy mother-in-law Mrs. George Sloane.  Mrs. Sloane had another daughter, the well-married Mrs. Albert Henry Flint; and a son, Parker Sloane, President and founder of the Roosevelt Savings Bank.  Newspapers followed the movements of the socially-prominent family; and on August 29, 1920 The Sun and the New York Herald both reported “Mrs. George Sloane of 8 East Sixty-second street is entertaining at the Mountain House, Lake Mohonk, her daughter, Mrs. Albert Henry Flint.  Her son, Mr. Parker, is at the Homestead, Hot Springs, Va.”

Two years later, on November 22, 1922, the New-York Tribune reported on Margaret Sloane Manson’s upcoming debut, which would include a dance at the Ritz-Carlton on January 2, 1922.

The Mansons spend the summer in Europe in 1924, but returned in time for Margaret’s marriage to Clinton Elliott Jr. in the Madison Avenue Presbyterian Church in November.  By the mid-1930s it was Parker Sloane who was living in the house; but its days of a single-family mansion were drawing to a close.

In 1946 the residence was converted by architect James E. Casale.  There was now a doctor’s office on the first floor, a duplex above, followed by two apartments on the third floor, one on the fourth, and two on the fifth.   Shortly thereafter author Thomas O. Heggen and actor Alan Campbell took the duplex apartment.  Tragically, on May 19, 1949 Heggen was found dead in his bathtub.  The Oxford Illustrate Literary Guide to the United States later said “Heggen’s death, the result of an overdose of sleeping pills, was ruled a suicide.”

A sneak thief made his way into the apartment of Mrs. Rosalind Diener on February 18, 1957.  Rosalind’s sister, Mrs. Leona Diener Weitz of Cleveland, Ohio, had been a house guest for more than two weeks and both women were out that afternoon.  When Mrs. Weitz returned around 5:30, “she discovered that the four-room apartment had been ransacked,” reported The Times the following Day.

Most of the $77,000 in stolen furs and jewelry belonged to the visiting sister.  “The police said the missing property included two expensive mink coats, as well as diamonds, rubies and other gems in platinum settings.”  The women’s lost property would amount to approximately $600,000 today.

The house enjoyed its short time in the cinema spotlight when it appeared as the home of wealthy socialite Claire Gregory in the 1987 romance crime thriller film Someone to Watch Over Me.

In 1992 architect Emilio Ambasz paid $3.2 million for the mansion which he used as his home and office, along with the rental-producing apartments.  Then in May 2007 real estate investor Keith Rubenstein agreed to pay $35 million for No. 8 East 62nd Street.  According to brokers, he beat out entertainer Madonna, who offered 25 percent less.

The New York Times reported on May 27, 2007 “Now Mr. Rubenstein is planning an extensive renovation to restore the mansion, listed as having 14,000 square feet on six levels, to a single-family home.  He is planning to add a pool and a Russian steam bath, in a renovation that he said could take up to two years to complete.” 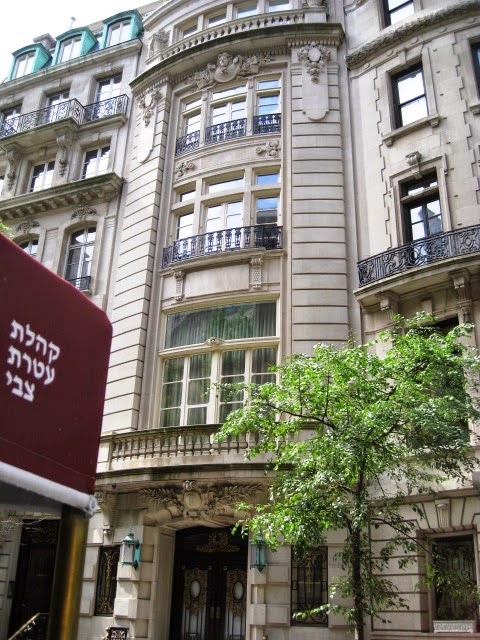 Today the distinguished Beaux Arts façade has been carefully restored and, as Thomas McLaughlin intended in 1902, No. 8 East 62nd Street is a private home to a very wealthy owner.