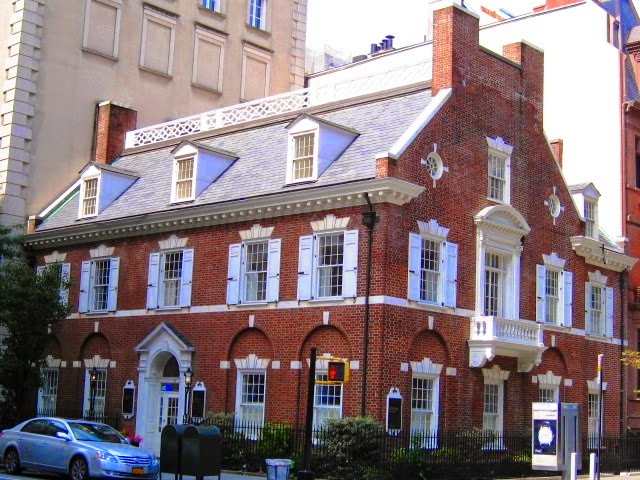 By the time the Great Depression spread its gloom over Manhattan and the rest of the country, Madison Avenue was no longer the thoroughfare of upscale mansions it had been before the turn of the century.  Although most of the houses had been razed for commercial buildings, or radically made over into shops and offices; on the southwest corner of 64th Street the fantastic Queen Anne style mansion that had been for many years the home of Mayor Seth Low still stood.  Next door at No. 28 East 64th Street Irving T. Bush’s former home also survived; although both had been converted to small apartments and shops.  But neither would last much longer.

On March 1, 1932 The New York Times reported that The Bank of the Manhattan Trust Company had bought both properties.  The newspaper said that when the existing leases expired in October, “a new building of attractive design will be erected of which the ground-floor portion will be used as a branch bank office.”

While the depth of the Depression seems, in retrospect, to be the least likely time for banks to be expanding; the Upper East Side saw several new branch buildings sprout within a span of about five years.  One block to the south, on the southwest corner of 63rd Street, Frank Easton Newman had designed a charming neo-Federal building a decade earlier for the Bank of New York.  Now his Colonial-inspired design seems to have set the trend for the new Upper East Side bank buildings.

On November 14, 1932 architect Morrell Smith filed plans for the new Bank of the Manhattan Company branch.  Like Newman’s, his completed structure would pretend to be an elegant 18th century town house.  Completed in 1933, it cost the bank $100,000—about $1.7 million today.  Smith’s attention to period detail extended even to the working wrought iron shutter dogs on the upper windows.  Rippled glass panes were used to simulate age.  Splayed lintels, slate roof tiles, a Chinese Chippendale roof railing, Flemish bond brickwork and a delightful second floor balcony on 64th Street added to the illusion. 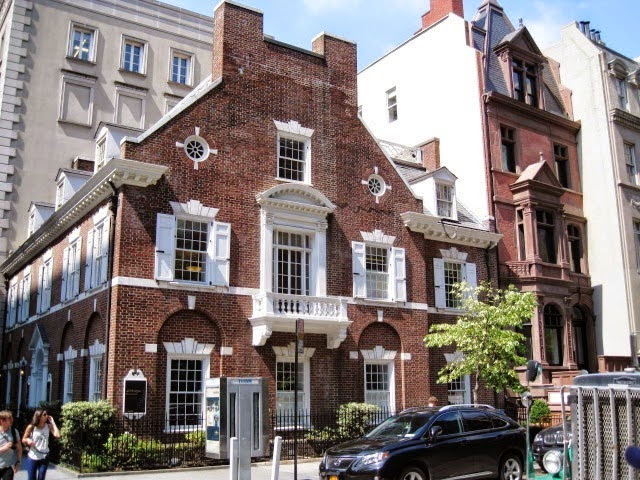 Not everyone was pleased.  At the beginning of the century architect Louis Sullivan harshly criticized the practice of borrowing from historic styles.  Now, in the age of airplanes and radio, many architecture critics agreed—the focus should be forward not back.  Among them was Lewis Mumford; whose history with the Bank of the Manhattan Company was already rocky (he called the bank’s headquarters building, designed by H. Craig Severance, “meaningless voluptuousness”).  He termed the Madison Avenue branch “quite defunct Georgian.”

Defunct or not, it was precisely to the taste of Vice-President Raymond E. Jones, who also served as treasurer and director of the Museum of the City of New York.  Jones was head of the committee to raise funds for the Museum’s new building—also Georgian Revival—completed just before the bank branch.  The Bank of the Manhattan Company had been founded in 1799 and Jones set out to replicate the best of that period’s design.  The first floor interiors were a step back into an elegant Georgian mansion.  Fluted columns, scenic wallpaper and a sweeping curved staircase caught the period perfectly.  The illusion was carried through to the teller desks where Smith forewent the expected cages in favor of open face-to-face counters.

Upstairs was a spacious conference room which would be used by various groups over the years.  In December 1940, for instance, a series of forums entitled “The Common Defense—What Will Happen to American Economy in the World Crisis” was hosted by the League of Women Voters of the East Side Assembly districts.  For several years the meetings of the Joint Civic Conference of the Public Education Association held its meetings here.

By the mid 1970s the building had become a Chase Manhattan Bank branch.  Morrell Smith’s and Raymond Jones’ insistence on period correctness resulted in a problem on October 7, 1976.  With no teller cages there was nothing to stop the thief who “jumped over the counter, took $5,900 and fled,” as reported by The New York Times the following day. 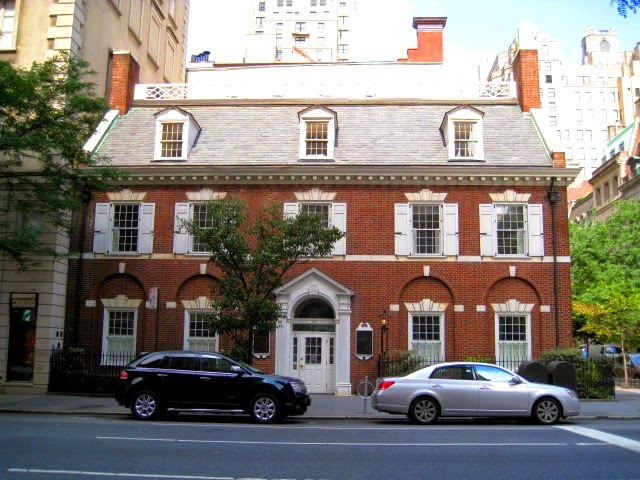 non-credited photographs taken by the author
Posted by Tom Miller at 2:20 AM